You're On the Force!

Among the various titles in the Contra series, few titles are considered to be as bad, or as baffling, as Contra Force. Released in 1992, this game was planned as the third official title in the series (which, originally, would have made Contra III: The Alien Wars into Contra IV instead, and that, naturally, discounts the portable Operation C), but release dates were pushed and this title, instead, sits as a spin-off of the franchise without any specific number.

Except, originally the game wasn't even intended as a Contra game. The original title was Arc Hound and, despite looking and playing largely like a Contra game, this was an unrelated title. But then the game's Japanese launch was canceled, the localization in America continued, and the game was re-branded as a Contra game. A way to make lemons into lemonade, I suppose, although the comparisons certainly don't do this game any favors.

On it's face this game doesn't seem that different from the Contra games that came before. It's a run-n-gun shooter where your hero has a limited set of lives and dies with a single hit. Playing through five stages -- three side-scrolling, two top-down -- the player is charged with working their way through waves of enemies all to reach the final big bad at the end of their quest, thus saving the world once again from an evil paramilitary threat. It's just that this time the threat is all-too-human terrorists instead of aliens.

To play off the Contra formula the game makes a few interesting changes. The first is that you aren't limited to two very similar characters, both of whom control the same. In this game you have a selection of four guys to play as, each with their own abilities: Burns, who has grenades and a machine gun as his special weapons, and who can jump higher than any other character in the game; Smith, who can get a sniper rifle and missiles, giving him the longest range of any character; Irons, who can get a flame thrower and a bazooka, with the bazooka having the highest firing-rate in the game; and Beans, who has timed explosives, and who also comes permanently crouched, meaning that when he actually crouches he's so flat the enemies can't hit him with bullets. These four characters, with their varying play styles, do lead to some strategy and flexibility in the game's mechanics.

The other key difference with this game is that power-ups don't come in flying orbs, automatically dropping their weapons on the ground. Instead, each team member collects briefcases which increase their power-up meter, a la Gradius. Get your meter to a slot you want it and you can take that power-up, getting a bonus or a new weapon on the character until they die. In theory this is an interesting change because it allows the player options in how they want to choose their load-out. In practice, though, this power-up meter slows the mechanics of the game down and makes it frustrating to play. 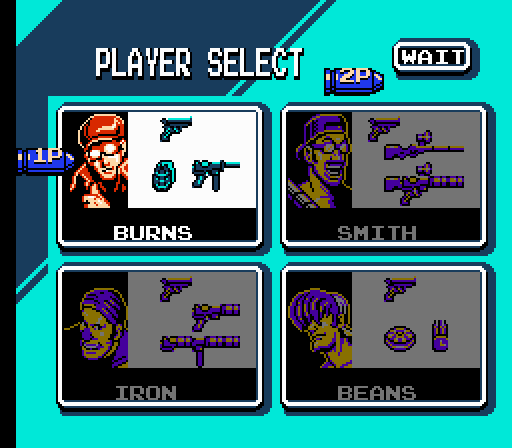 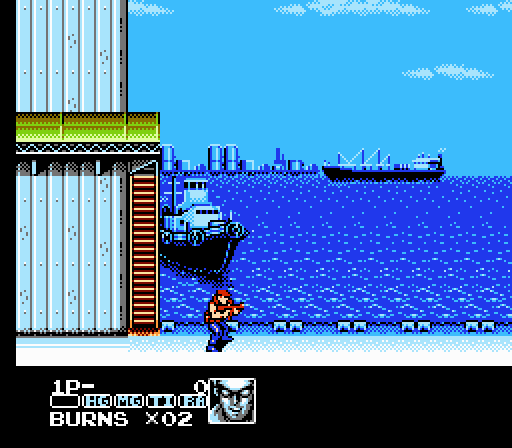 To begin with, each character on the team has their own meter, so if you have, say, Irons up to slot four on his meter and then you switch to Beans, the meter drains and you have to charge it all up again. Worse, the meter drains any time you die as well, so no matter what you do, each character starts at their minimum level any time you get them. Considering you have to grab at least two briefcases, as random drops, before you can ever get a better weapon, you'll find your characters often very underpowered for the situations they've been dropped into.

Players of the Gradius series are generally used to this, in fairness, as death in that game basically means your entire load-out goes up in smoke. The Contra series had been evolving away from that, though. Power-ups were more readily available, and instantly gave bonuses (which helped to balance out the constant barrage of one-hit-kill enemies). And then Contra III introduces keeping a power-up in reserve, just in case, which was a big step forward that this game seemingly reverts back. Sure, this game was in production before and simply took longer to localize, but it came out as an official part of the Contra series and it feels awfully limited by comparison.

The biggest issue with the game, though, is that it feels completely unoptimized. I think this is likely due to the fact that it was canceled in Japan, so it didn't get time for polish, and then just shoved over to the U.S. to localize it without much more finishing. That's a supposition when you play the game there's no way to deny this game feels under-done. It's rife with slowdown, constantly chugging in the side-scrolling sections any time there's a single enemy on screen. Waves of enemies are part and parcel for the Contra series and this title can't even handle one, most of the time, without slowing to half-speed to compensate.

All that being said, there are moments that do sell the vision of this game. The overhead portions are actual highlights this time around, with stage two taking place on some docks, including a boat section, while stage four takes place across multiple plans in flight. It's pretty fun to go running across the wings of a plane, jumping from one to the next as you shoot down waves of bad guys. The overhead sections of the game don't suffer from the same slowdown issues as the side-scrolling sections, making these areas great stages. They're the moments of brilliance you expect from a Contra game. 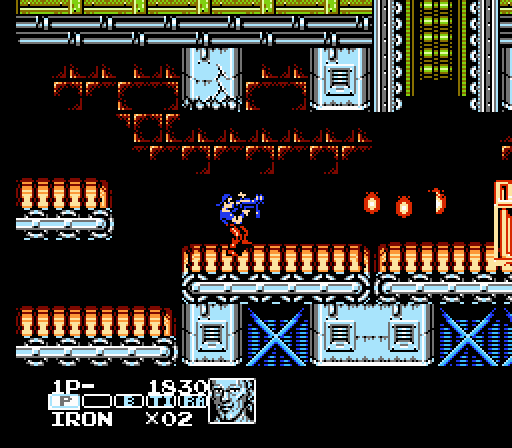 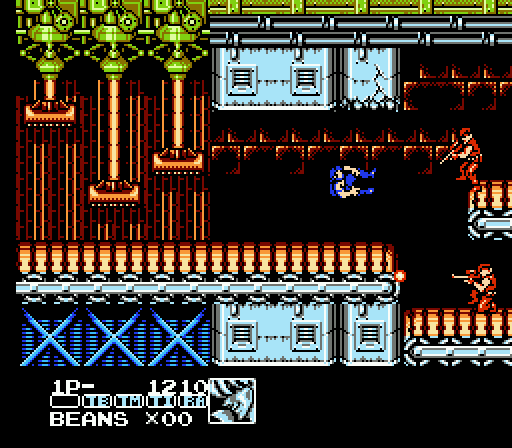 I can see what the game designers had been going for with this title, but I can also see why Konami cut its losses on the game before shoving it out the door simply to recoup some profits. The game does feel unfinished and the things needed to fix it -- re-balancing the Gradius power-up system, actually getting the side-scrolling sections to work properly -- likely were too expensive to make the game profitable. Had the game spent more time in the hopper I think it might have been a really solid title, Contra or not, but it just didn't get the love and care it needed, in the end, to make it a winner.

I didn't hate my time with Contra Force but I didn't really love it either. There's a glimmer of a good game buried deep under all the issues this title has, but it's not enough to carry the game past its flaws. I can see why fans of the series hated the title when it came out, and I can understand why there's still a bad air that surrounds this game even now. It's an interesting idea, and it even shows the creative ideas the series needed to implement to evolve and grow the franchise, but it just didn't have what it took to redefine Contra. It's a failed attempt instead of the new way forward.