Take to the Stars! The Gunstars!

When discussing Contra: Hard Corps, Konami's best game in the ContraStarted by Konami in 1988 the run-n-gun platform series Contra was, for a time, one of the flagship franchises for the company. series as well as it's most expansive, I singled out one major factor that drove the company to make that Contra game so good: Gunstar Heroes. Developed by Treasure, a company that spun out of Konami after the Konami higher-ups wouldn't let the team pursue their design ideas, Gunstar Heroes was everything that Contra needed to be, and then some. It was a blow to the idea that Konami had run-n-gun supremacy and showed that new ideas could really work in the genre.

Clearly Konami was paying attention because every great idea in that game could be traced to the evolution of the genre and, more specifically, the work that Treasure had done on their title. Hard Corps. felt like the perfect blend of Gunstar Heroes and (weirdly) Contra Force, but you didn't get there without Treasure and their fantastic game. Even then, as good as Hard Corps. is, Gunstar Heroes is better.

At first glance Gunstar Heroes doesn't seem all that different from what Konami was cranking out in their series. The art style is a little more anime, the enemies more mechanical than alien-infused. But at its core it's a run-n-gun shooter like Konami had been cranking out for years. You go form right to left, killing enemies, picking up ammo options, and generally blasting everything in your way until you get to the end of the stage. Where the game shines, though, was in the twists in the formula to really shake up the genre.

The first twist to the mechanics was in the weaponry. Where in Contra your character could have a selection of weapons but each one was independent, Gunstar's weapons combine. Get the lightning laser and it shoots out a solid stream of death, but combine that with the fire weapon and suddenly you have a fire sword that deals immense damage. There are four weapons in the game -- force (machine gun), flame, lightning (laser), and chaser (homing shot) -- and each of these could be combined with the others (and themselves) to create multiple different weapon modes. This gave the game a level of customizability and creativity that the Contra games were lacking. Combine that with your character's ability to perform melee attacks and suddenly your guys felt way more powerful than anyone in a Contra title.

Another big change was giving the characters a health meter. Although Hard Corps. would do something similar after this (although only in its Japanese release), Gunstar's meter was far more useful. Instead of just a three hits, the characters could sustain multiple hits, and different types of damage, before death. Health was a resource that could be used here, and that meant strategies could be devised on when to take damage, when not, and what was worth avoiding. The whole action of the game is different when you suddenly don't have to worry about a single hit destroying you.

Having a full health meter doesn't make the game easier, though, mind you. That is, in large part, because the game is absolutely chock full of bosses to fight, all of whom are designed to kill you. The bosses are, frankly, a highlight of the game in large part because they are massive and interesting. From the delightfully designed Seven Force (literally seven robots you have to kill one after another in a long boss gauntlet) to the game board stage filled with weird bosses, and everything else in the game, each and every boss provides a unique challenge with a lot of variety. This game doesn't lack for ideas, or dangers.

Thing is, as the game throws all these dangers and obstacles at you its doing it with a lot of fun. This is a game created by a team of people that were absolutely delighted to be able to make their game their way and it shows. This bright and colorful shooter is so chock full of ideas that it's clear the designers put in everything (with the kitchen sink) into the game they were finally able to design. The game never feels overstuffed, just stuffed enough, and every minute of the game is an absolute treat to play. This was an absolute labor of love and it shows.

Sadly, for many kids in the 1990s this is a game that fell under the radar. All told, worldwide, the game only sold 270,000 copies, which was respectable (and helped to make a name for Treasure), but it does make it a prized collector's game now. If you're lucky enough to find a cart (loose without its game box) you'll still likely pay over a hundred bucks for it, and that's only if you can find the game. it's not the rarest of titles, but its relative low numbers combined with solid word of mouth about the game (and the legacy its managed to attract over the years) makes it a prized Genesis game for any collector.

I first played the game back in the mid 1990s when a friend had the cart and I instantly loved it. It's the kind of game I would have purchased if I'd had a Genesis at the time (but I was a NintendoSince 1983 (with the release of the Famicom gaming system in Japan), Nintendo has proven to be a gaming company dedicated to finding what gamers want, even when the gamers don't know it themselves. From dual-screen systems, to motion controls, to convertible home console/portable consoles, Nintendo regularly proves that the weirdest innovation is exactly what the gaming community needs. fanboy through and through and didn't pick up Sega's consoles until much later). We'd spend hours on that cart trying to get through all the bosses (quite a feat at the time), and even now I have fond memories of the game. It's a seminal title for the Genesis, often held up not only as one of the best games for that console but also one of the best games ever, and any kid in the 1990s that got to play the game knows why. 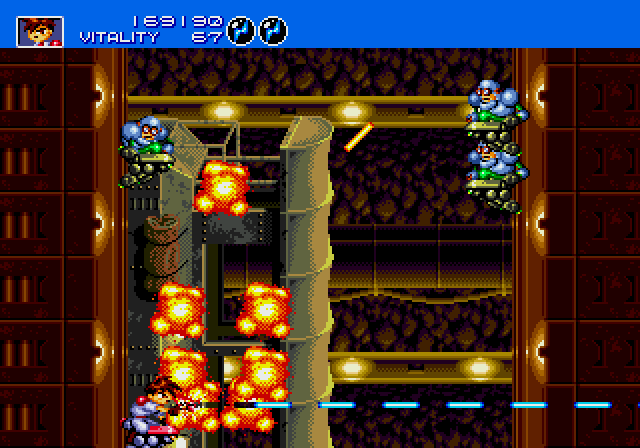 Truly the legacy of the game is in how it redefined the genre. Konami had to put out their own Contra game to compete, and this back-and-forth certainly made Konami's offering so much better. I would have loved to have seen what the two companies could have done in a back and forth war if Gunstar Heroes had sold better upon its initial release. A sequel on the Genesis could have pushed Konami even harder, and maybe the Contra series could have remained at a creative peak (instead of drifting off into obsolescence soon after).

The only sequel the game did get was Gunstar Super Heroes, released ten years later on the Game Boy Advance and, sadly, it sold about as poorly as the first game, squashing any hope for further iterations. And yet, that still doesn't take the luster off Gunstar Heroes. This is, hands down, one of the best run-n-gun shooters and a must play for any fan of the genre. Hell, it's just a must play game in general. If you haven't already treat yourself to some Gunstar (in one of its many re-releases) and see just how great this game truly is.