As we covered over on the Superman III/Superman IV combo-review, the SupermanThe first big superhero from DC Comics, Superman has survived any number of pretenders to the throne, besting not only other comic titans but even Wolrd War II to remain one of only three comics to continue publishing since the 1940s. franchise was going through some... difficulties. Although the first film had been a massive success, behind-the-scenes issues with the creation of that film like the Salkinds (who owned the licensing rights to the superhero) to fire director Richard Donner halfway into making sequel Superman II, and then they tinkered with that film (letting new director Richard Lester) making it "funnier" and less "dramatic", and his sensibilities informed the vastly more comedic (and much worse) third film. As the tinkering continued, the profits returned went down -- none of these films are financial issues but the returns on the films did steadily decrease. Eventually the Salkinds sold their rights to the Cannon Group, and that team produced (on a much smaller budget), the awful Superman IV. 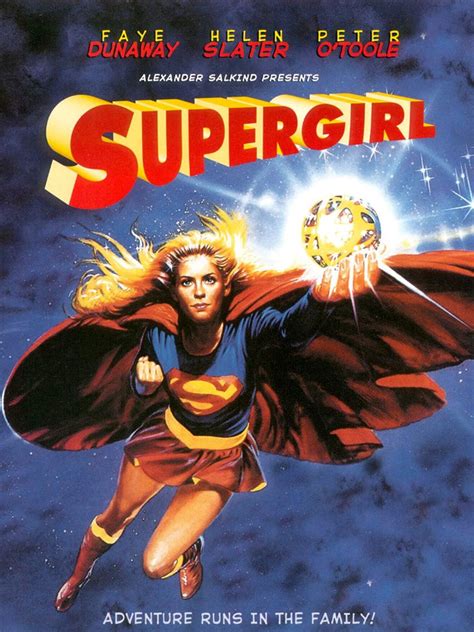 The reason why the Salkinds sold their share, specifically, was because of this film right here; 1984's Supergirl. Where the Superman films had at least turned a profit (of some kind), Supergirl was an unmitigated disaster. Made on about the same budget as Superman III ($35 Mil for Supergirl versus $39 Mil for Superman III), the Girl of Steel's film failed to win fans at the Box office, pulling in a paltry $14.3 Mil. It was a Box Office bomb and that was enough for the Salkinds to pull out and look for other characters to adapt (such as the disastrous Santa Claus: The Movie the next year, and then Superboy for four seasons on TV).

Was Supergirl really that bad? Is it deserving of the title of "film that sank Superman" (since her film led to the rights being sold and the next group treating Big Blue so bad that Superman stopped getting films for two decades)? I assumed it was, and I had memories of it being pretty terrible back in the day. Going back and watching the film again, though... well, it wasn't that bad. It's not good, mind you, but the film is certainly watchable and has its moments where it actually comes together pretty well. It's cheesy, it's a little low-budget feeling, and it's certainly not anywhere near as good as the first Superman film. But unmitigated disaster this is not (especially if you watch the longer, International Cut, which is what HBO Max has on streaming).

I think some of the issues with the film certainly come fro behind-the-scenes tinkering. Early testing of the film (which it 138 minutes long) complained about pacing, so the producers hacked that version down to under 100 minutes, cutting out a lot of character development and ruining the flow of the film. I remember, last time I watched it, Kara is sent from Argo city and just somehow arrives at Midvale Prep without any real development. The longer cut of the film does flesh that out a bit more (and many other sequences), although it still has a hard time presenting the Girl of Steel like her comic book counterpart (and issue Big Blue also had in his films). Still, it's not a bad film at all in its longer form and does present a decently fun, and cohesive, adventure for our Girl of Steel.

In the film Kara (Helen Slater) is introduced in Argo City, a bubble of Kryptonian civilization that survived the death of the planet but moving itself to "Inner Space", a pocket dimension outside our reality. The citizens of Argo live an idyllic life, far from the concerns of the bigger universe, spending their days crafting art and studying advanced sciences. Kara is friends with he creator of the city, Zaltar (Peter O'Toole), and he lets her in on his little experiments. One of those experiments, though, goes wrong and the power source for Argo City, the Omegahedron, gets sucked out into the vacuum of space where, presumably, it'll plop out into our reality. Kara chases after it, using an experimental pod, and she zips off to Earth where she immediately appears as Supergirl. 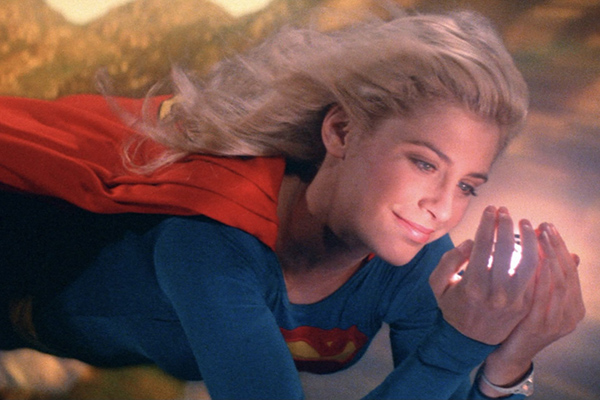 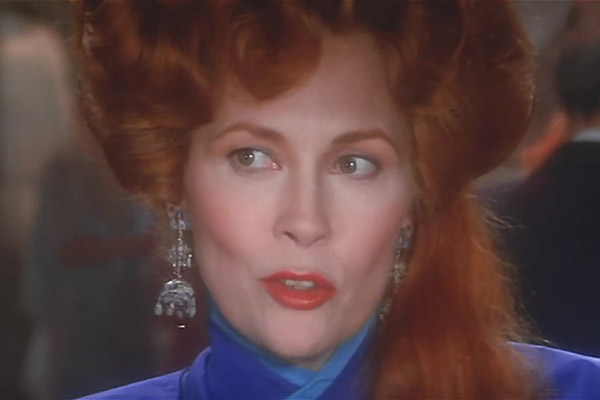 Although her cousin, Kal-El (aka Clark), had been on Earth for years, Kara still has to learn much about being Supergirl on her own. She finds she has powers, that she's more than she used to be, and she realizes she'll have to use those powers to find the Omegahedron and save her city. To that end she takes on a secret identity at Midvale Prep so she can search the surrounding areas and she knows (due to a charm on her wrist from Zaltar) that the Omegahedron has to be somewhere nearby. And it is, in the hands of evil sorceress Selena (Faye Dunaway). Kara has to get the Omegahedron away from Selena before the sorceress figures out its full power and uses it to take over the world.

Again, I want to stress that the film is not exactly great. The main through-line isn't bad, and there are moments that really do work, but there are just as many moments (if not more) that are just bad. Kara appearing on Earth is a bit of a weird one as she has to use the pod to fly into our space, but then she is birthed out of the pod, in her new Supergirl costume, flying up from a lake for... reasons (it makes even less sense when she's just able to fly back to Argo City, as Supergirl, at the end of the film without the pod). She's able to somehow craft a secret identity, replete with clothing (despite that not being a Kryptonian power, creating clothes out of thin air), and she blends into daily life in Midvale both seemingly knowing everything about Earth and yet also being clueless about basic things like what a horse is, or a train, or bras.

I think the reason I liked the film as well as I did is that at least the villain is interesting. Faye Dunaway didn't get much credit for her performance when the film was released (she was nominated for a Golden Raspberry, which seems unfair), but it's clear she had an absolute blast here playing the villainous heavy. Selena's story is simple: she finds powerful device and then uses powerful device to become more powerful, and that works. It's not much of a character arc, mind you, but at leas it's not yet another riff on the Lex Luthor archetype.

There is a silly plot line about a man, mind you. Selena wants the hunky gardener she spies, Ethan (Hart Bochner), and she crafts a love potion to make him fall in love with the first woman he sees and, of course, that ends up being not Selena but Kara. So she decides that our plucky Girl of Steel (or, really, her secret identity) has to die so Selena can have the hunky man all to herself. This isn't really a great storyline -- a much as there was a love story in the Superman films, with Clark and Lois (and occasionally Lana), it was never tied to the villain of the film so explicitly -- but it does at least give the film a way to bring heroine and villainess together. Not a good way, mind you, just a way in general. 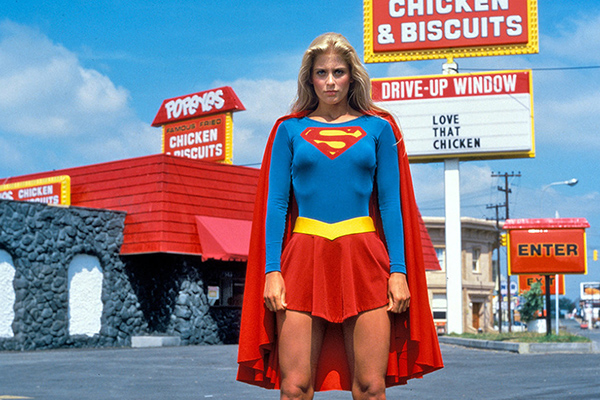 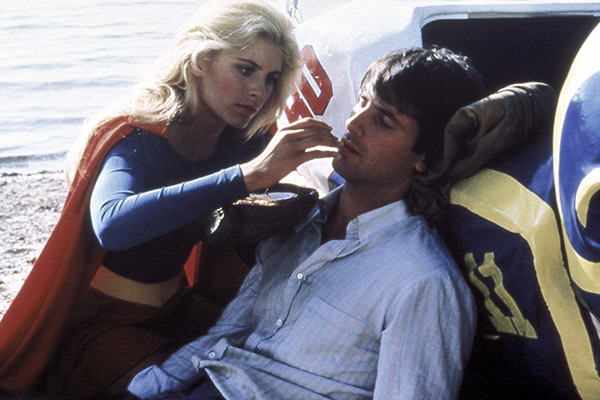 I think that actually summarizes so much of this film, even in the longer cut: there's a lot of decisions that are made in the film that do get the story movie and keep the general "Kara has to find the Omegahedron" story on track. Most of the majors decisions aren't great, though, and it seems like it was all done simply to get Kara through her story in an expedient fashion. If bad choices happen along the way, oh well, we'll just move on to the next scene and hope no one questions it. Of course, I question it because that's my job on this site and there were so many little things that didn't quite work in the movie. It's a bit of a mess, really, and I absolutely understand why this film bombed at the Box Office.

And yet, I think I expected worse than what I got. Due to the way I went through this series, watching Superman IV before coming back to Supergirl (which predated it by three years) and knowing the bad air that hangs around this film, I expected the Girl of Steel's 1984 adventure to be as bad as Big Blue's last outing. It isn't. Heck, I think it's probably even better that Superman III (and maybe close to Superman II on the quality scale). It has issues that all likely tie back to a rushed production and executive meddling, but at the end of the day the film is perfectly serviceable and, at times, a decently watchable. That's not a rousing endorsement, by any stretch, and this isn't a film I'm going to put into regular rotation for my watch list. But as far as absolutely bombs go, this film really doesn't deserve the reputation is has. It's bad, but it's not that bad.