After the triple-combo of Donkey Kong, Donkey Kong Jr., Mario Bros., Nintendo had a verified hits series on their hands. Sure, Mario Bros. might not have been the break-out smash hit that the original Donkey Kong had been, but each game proved Nintendo had what it took to make fun to play arcade games with a variety of styles and play options. The only question, then, was where to go next? 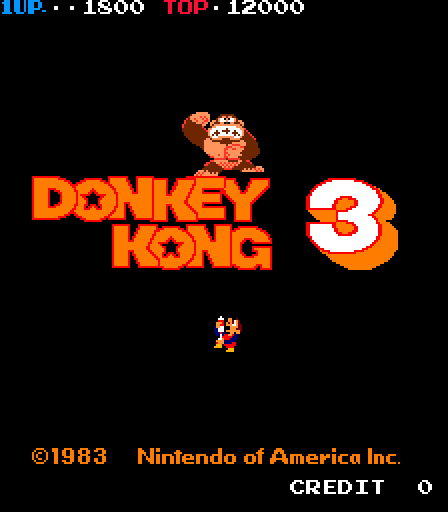 Obviously the Donkey Kong series was a big money maker, so making a third game there was a no-brainer. But by shifting Mario over to his own series, though, Nintendo has removed one of the key figures from that series. Instead of just slapping Mario back over again, Big N instead decided to make a new hero to take on Donkey Kong: Stanley the Bugman. And if this is the first time you've ever heard of that character, don't be surprised; it'll likely also be the last.

In the game, Stanley acts as a gardener of a sort, defending a greenhouse (or, really, series or wings of a greenhouse). His days are spent spraying bug killer act insects, but that all gets excessively difficult when Donkey Kong invades the greenhouse. DK shakes a couple of bee hives, and suddenly the bugs are pissed, attacking Stanley and going after the plants in force. Stan has to spray Donkey Kong in the butt and chase him out of each wing of the greenhouse before the bigs manage to kill him or steal all five of the plants at the bottom of the stages. It's, well... really stupid.

Nintendo had, in the past, made a few vertical shooters. In the early days of Nintendo's arcade business, the company had made a few vertical shooters, like Space Fever and Hell Fire, and while this game has DK on the packaging, this is a vertical shooter through and through and, frankly, not even a very creative one at that. Stanley is basically stuck to the bottom of the screen, wandering back and forth. While he can go up two different tiers in the layout, he's more or less tuck to the bottom third of the screen, like he's a ship in Space Invaders, and like in that game, his only choice is to shoot his basic weapon.

The game doesn't have much in the way of variety. Once you get into it, the whole experience essentially spans three stages -- two greenhouses that look exactly the same (although the second version has a section missing from the middle tier to make the platforming harder), followed by a "boss" stage where you finally defeat DK by doing exactly what you did in the previous two stages, but this time he gets a hive stuck on his head and falls to the ground. Even compared to Mario Bros., this premise is thin. 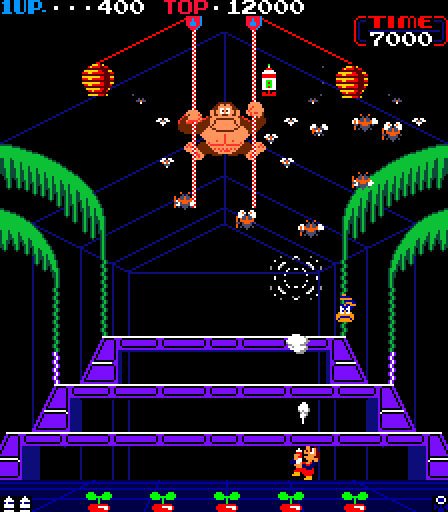 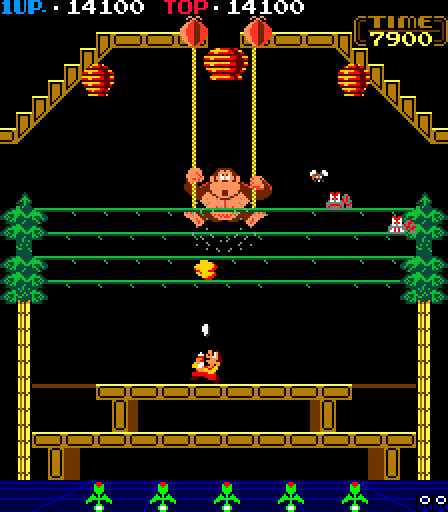 Part of the problem is that the game has no story hook. When you played as Mario, you were chasing DK to save your kidnapped girlfriend Pauline. When you plays as Junior you were chasing after Mario to save your captured father. But here, you're fighting off DK to save plants. Why? What is DK's goal here? Why is he even in a greenhouse and why does he care if the bugs attack Stanley or not? There's hardly any explanation, nor does the battle between Bugman and Ape stand the test of time as a battle for the ages. It just... exists.

Stanley is a pretty limited character, with just his one gun to use. A little variety might have helped this otherwise thin game, like some extra guns or more things for Stanley to do, but all he ever has is his spray gun. Yes, occasionally DK will get hit in the anus enough that he'll climb up and dislodges a powered up spray canister (that lasts a short time while equipped), and this spray can can obliterate bugs and force DK up the screen even faster, but that's it. It's basically this game's version of the Hammer, and while it's effective it's not really different, just more.

Vertical shooters live and die on their variety. More guns, more ammo, more things to do, but Stanley gets none of that. Yes, the bugs do start to come in more varieties -- invincible worms that block your shots, queen bugs that swoop down with a quartet of soldier bugs -- but the basic setup never changes and very little new even gets added. Just the same three stages, over and over, without end, reason, or motivation. It's really awful.

The game itself controls well, with Stanley moving around tightly and his gun shooting in a responsive manner, but that's not enough to perk up this game. Once you've played the very first stage you've literally seen everything the game has to offer. It'll steadily up the difficulty, throwing out more and more bugs, but that's it. If you're looking for a deeper experience, anything to rival the first two Donkey Kong games, you're gonna need to look somewhere else because Donkey Kong 3 isn't that game. 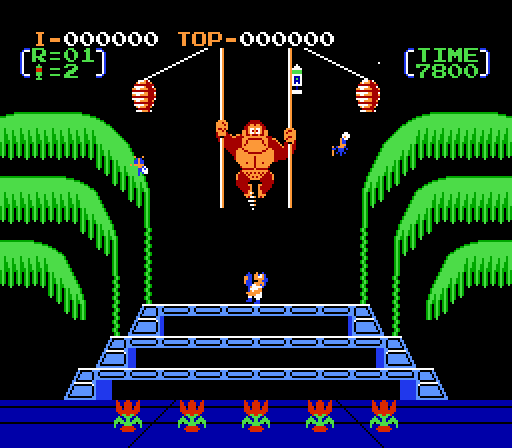 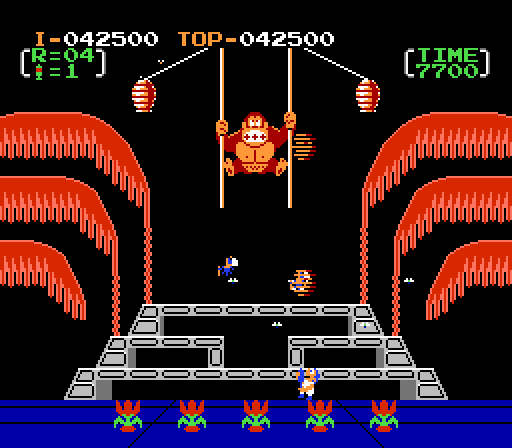 Honestly, it feels like half of an idea, something someone came up with in a planning meetings, and was told, "yeah, go make that." But no one ever said, "and then what happens?" We needed the "and then" because this is just one idea repeated ad nauseam. Fun for a single quarter, but once you run out of lives you're gonna go somewhere else for your fix afterwards. This is the rare miss step from the company, but its a big one for sure.

After this, Stanley didn't show up again in the west ever again, not in a proper video game as the hero. His game was turned into a Game & Watch title, Donkey Kong 3, although this is a weird little version and Stanley and DK stand at opposite sides, spraying bugs at each other to try and hit the other person with insects. A modernized Game & Watch version was featured in Game & Watch Gallery 4 for the GBA, although weirdly this one ditches Stanley, instead putting Mario in the game and swapping bugs for ghosts. It's really weird.

Stanley's last big claim to fame was in in Donkey Kong 3: Dai Gyakushu, a semi-sequel that sees Stanley chasing DK across the world (and into space) as DK floats on two balloons gripped between his hands (a la the vines he uses here). The goal is the same, though -- kill the bugs and spray DK to the top of the screen -- all across twenty stages (which is really just twenty different backgrounds slapped on the same, flat stage). It only came out in Japan, was developed by Hudson for Japanese computers, and never saw the light of day again after the mid 1980s.

The only time we've seen Stanley after this was only ever shown in cameos -- random quick appearances in the WarioWare titles, or as a trophy in the Smash Bros. games. But aside from these, Stanley has never had a proper game again. I guess Nintendo realized the guy was a real loser.