Moving to the Country

While the Super Mario SeriesHe's the world's most famous plumber and the biggest face in Nintendo's stable, a character so ubiquitous you already knew we were talking about Mario even before we said his name. series had been humming along for years (11 main-line and portable titles by 1994, not to mention all the other spin-offs and odd cameos for the world's most famous plumber), his first adversary, Donkey Kong, had pretty much vanished from consoles and arcades after the release of Donkey Kong 3. Aside from Donkey Kong Jr. showing up in Super Mario Kart, it seemed like NintendoSince 1983 (with the release of the Famicom gaming system in Japan), Nintendo has proven to be a gaming company dedicated to finding what gamers want, even when the gamers don't know it themselves. From dual-screen systems, to motion controls, to convertible home console/portable consoles, Nintendo regularly proves that the weirdest innovation is exactly what the gaming community needs. had given up on the big gorilla. 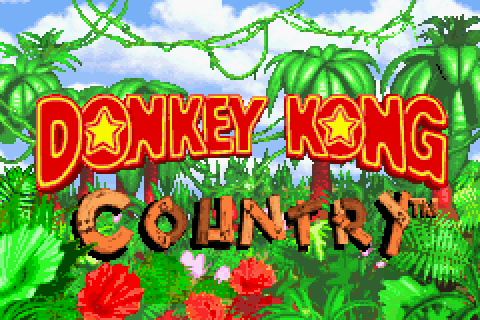 That all changed in 1994, though. That year saw the release of two separate Donkey Kong titles: Donkey Kong '94 (the Game Boy Color title that we'll cover once we catch up to it with our Mario series dive), and arguably the even bigger hit of the year (and one of Nintendo's biggest system sellers for the SNES), Donkey Kong Country. This game was nothing short of a phenomenon when it came out and it changed the face of the Donkey Kong series permanently.

Although DK had only been the hero in one of his games, and technically it was his son in Donkey Kong Jr., the gorilla was never really viewed as the hero type. DKC, though, cast our gorilla -- well, okay, now the third gorilla in the family, technically Donkey Kong III -- as the hero of his own story, battling not Mario but a new crew of evil baddies, the Kremlings. Getting home one day from life out in the jungle, this newer, hipper, beat-box dancing DK finds his entire banana stash cleared out. This, of course, simply will not do so, teaming up with his friend, chimpanzee Diddy Kong, the two head off on an island spanning adventure to reclaim the bananas and defeat Kremling leader, King. K. Rool, once and for all.

Taking a page from the Mario adventures that had preceded it, Donkey Kong Country is a proper platforming adventure, with no single-screen stages or simple puzzles that marked DK's earlier adventures. The island is broken up into multiple zones, generally themed like the ice-themed Gorilla Glacier or the Industrial Kremroc Industries, Inc., each with their own selection of stages. Most are basic platforming -- get from one end of the stages to the other by running, jumping, and rolling along until you reach the exit. But there was more to the game than just these stages, so much more.

Firstly, the two characters in the game play very different. Donkey is the heavy of the duo, weighing more and the only one capable of killing certain heavy enemies. He couldn't jump as high, though, and his rolling attack, where he curls up in a ball and rollings along the ground, is slower and less agile than anything Diddy has. Diddy is lighter, which means he can jump higher, but it also means he's unable to kill some big enemies. However, his cartwheel is fast and light, making it idea for a number of maneuvers, especially if you're trying to reach many of the secrets in the game. 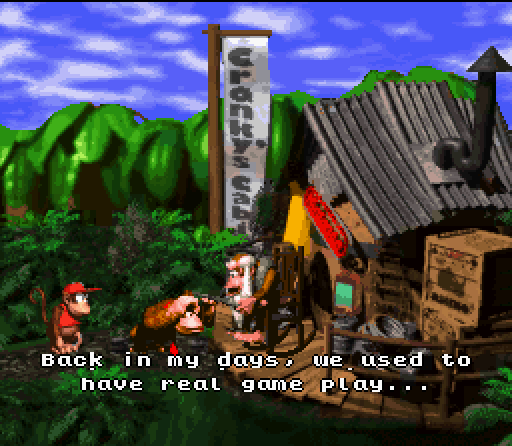 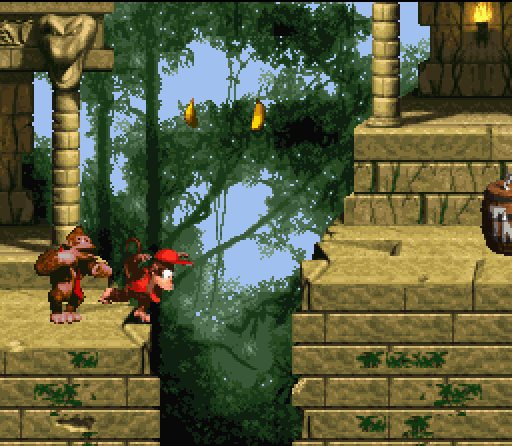 The game is, frankly, packed full of secrets, with just about every stage having at least one bonus game locked inside it. While you can play the game through without getting any of the bonuses (unlike in later games the bonuses here aren't tied to any kind of end-game progression), the game does track how many bonus areas you've found. If you want to full-clear the game (and get the trolly 101%) you'll have to scour the game looking for the secrets, many of which are hidden in diabolical areas.

Honestly, so much of this game is just diabolical. Designed by Rare (known for their incredibly unforgiving games in the NES era, such as Snake Rattle 'N Roll and all the Battletoads entries), the game gets pretty mean as it goes on. In fairness, the learning curve is nice and shallow for a long time, and even a scrub like me could finish the whole game (with enough trial and error and plenty of 1-ups), but there are still plenty of sections (mine cart areas, slippery ice worlds with tiny platforms, absolutely unforgiving water levels) that will make you cry out in agony. That's Rare for ya.

The game, though, didn't become famous for its eventual difficulty (unlike the infamous Battletoads), but instead because of its graphics. Designed on Silicon Graphics workstations (the same hardware that would later be used to build the Nintendo 64), the game sported pre-rendered 3D graphics and, at the time, they were absolutely gorgeous, a true marvel for the SNES that made every kid turn and stare. That whole thing about "Sega does what Nintendon't"... yeah, suddenly Nintendo was sitting pretty and Sega had to run to catch up. This game was famous because of its new-style graphics, which for a while influenced so many other games.

Going back and playing the game again, yes, it still looks great. The graphics have have a style and sheen unlike anything that came before, and Rare talked up so much about how the sprites looked and how they made the game look great. There was literally a talking point about how "the characters designs have individual hairs that move and flow". And sure, on the Silicon Graphics stations, that was probably true. But on the SNES, with it's little better than NES resolution and 16-colors per sprite limit, a lot of that detail was lost. The sprites look amazing, yes, but they're still sprites all the same. 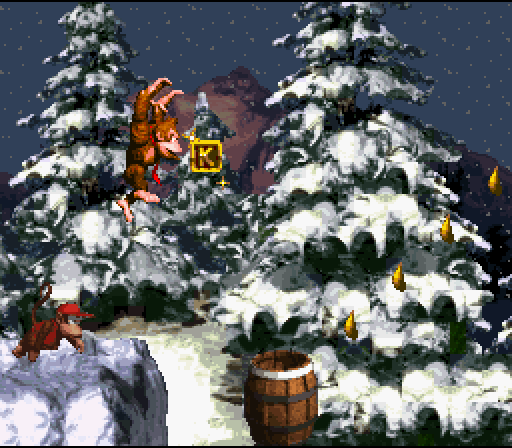 And yet the game is still fantastic all these years later. Yes, maybe the graphics don't seem as special as they once did, but where the sprites are no longer the selling point of the game, the fact is that it plays fantastically and is a hell of a lot of fun to explore. I've gone back a few time and booted up the games just to run through the worlds and, honestly, this first game never gets old. It's challenging in the ways many Rare games eventually can get, but in a fair way that feels good when you earn the next exit. It's the kind of game that lives on with gamers because of how tightly it plays, how fun the levels are, and how much variety there is in the game itself. This game, really, blows Super Mario World out of the water. Not bad for a character that had been absent for nearly a decade.

The game was so successful that it launched a whole new series with two more entries on the SNES plus a trio of Game Boy games all before it moved on the Nintendo 64 and later systems. This series is, at this point, popular enough that it could be considered a proper rival for the Mario series, which seems fitting considering the shared start for both heroes.

Meanwhile, this original was revisited twice by Nintendo. The first time was on the Game Boy Color where the game was basically remade (with only a few compromises) on this hand-held system, and it played pretty well. It even had some additions, like a couple of new or extended stages and a bunch of extra bonus games thrown in. For anyone that missed the SNES version, and who didn't want to play semi-sequel Donkey Kong Land, this game hit that sweet spot for portable play. The game was remade again for the GBA a few years later, but this was a less expansive port. Although it looks and sounds mostly like the SNES version, there haven't really been all that many changes to the game (aside from some basic game play tweaks for the portable system). Considering the SNES and GBC versions that already existed, this was a fine remake but not the idea choice considering the options.