Hoth Won't Know What Hit It

With Super Star Wars LucasArts have provided certainly the prettiest adaptation of a Star Wars film up to that point. It didn't really have much fielity to the story, in fairness, taking a lot of liberties to work in platforming sequences, but the game looked and sounded great. Even now, three decades later, there's still some serious charm to the presentation of Super Star Wars. That's undeniable. 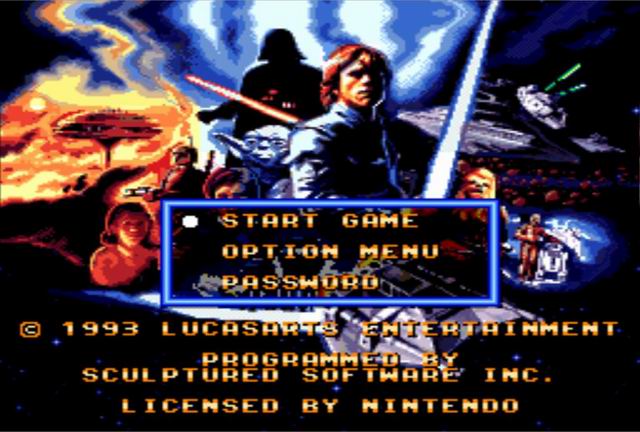 Playing the game, though, is a different matter. As it was back in 1992, the actual experience of Super Star Wars is one of frustration. A lot of effort was put into make the game look and sound reat, but less time was spent on actually making it fun. The challenge was all over the place and spiked, quite rudely, in many parts of the game. The game expected the player to perform rote memorization of everything just to get through such that one mis-step would lead to certain death. Getting through the game as a young child proved difficult for me and that didn't change all these years later. Super Star Wars is one of the prettiest games I absolutely detest.

That's a big part of the reason why I never gave Super Star Wars: The Empire Strikes Back a chance back in the day. I actually managed to grab the whole trilogy of titles cheap, but after suffering through the first game again, I set them all down, never to be touched until, well, now. What I found within the sequel, The Empire Strikes Back, was a game that built on the bones of the original Super Star Wars while attempting to correct the wrongs of the previous title. It doesn't always hit the mark but, in key ways, this does feel like an ironed-out experience that almost makes the whole game fun.

As with the previous title, Super Star Wars: The Empire Strikes Back purports to addapt its chosen film, Episode V: The Empire Strikes Back, into a platforming game. The story starts, as you'd expect, on Hoth with Luke going out (via Tauntaun) to explore space debris in the snowy wastes. What he finds are snow beasts, and an Imperial probe droid, all of which he slaughters mercilessly. Then he's called back to the Hoth base to help fight off Imperial soldiers. This leads to the iconic Battle of Hoth where Luke drives around, via snowspeeder, taking out AT-ATs (among other machines).

At this point the perspective begins to bounce around. We play as Han as he searches the Hoth Base for Leia before they escape the planet. Then we get Luke on Dagobah training with Yoda. Han and Chewie then have to deal with Imperials and bounty hunters in Cloud City before Luke hops into his X-Wing to race to the city to try and save his friends. it all culminates in a battle between Darth Vader and Luke as the climax of the game. Han is lost, Luke and Leia ride a ship out into space, and we're left waiting for the third game to tie up all the loose ends. 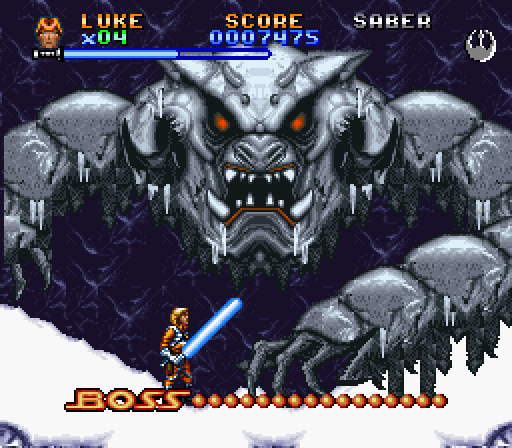 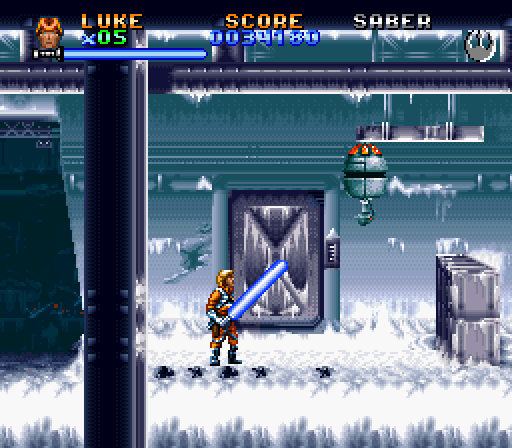 The first improvement this game makes is that it hews a little more closely to the original story from Empire. Yes, some liberties are taken, such as all the expanded areas where platforming take place (which didn't feature in the film) as well as tiny plot tweaks. Overall, though, this game lines up much more closely to its film than Super Star Wars did with Episode IV: A New Hope. At the very least it had greatly plot fidelity than the NES Star Wars: The Empire Strikes Back from the previous year.

Beyond that the game smooths out its platforming experience. Although this game is built on the same engine as the previous SNES title, there have been a few tweaks to make things more playable. The characters feel a little less floaty, but also all have a double-jump now to help refine their air control. They also feel a little less like they want to slide whenever they move. They control better in a way that just feels good. That helps a great deal.

The characters have also all been refined to make them more interesting. Luke now has Force Powers he can find and use, like invisibility/invincibility, Force Freeze, and Force Flight. Thes powers make Luke's section more interesting and move fun (and, also, a lot easier, which is a nice bonus). Chewie, meanwhile, has a spin move he can perform that does pretty solid damage to all enemies. And there's Han who... oh, well, he just has a blaster. Maybe he didn't get anything cool.

If anything, the improved platforming highlights how tedious the flight sections in the game really are. Naturally Luke flies his snowspeeder in the Battle of Hoth and this sequence reuses the Mode 7 flight mechanics from the previous title. It's honestly a pretty boring sequence of just randomly shooting things until you hit some arbitrary number, and then the sequence is over. Even flying around and taking out AT-ATs at the end doesn't spice it up all that much. The same can also be said for Luke's X-Wing flight near the end of the game at Cloud City. It lacks the spice you'd want from a good flight sim making it feel more tedious tha enjoyable. 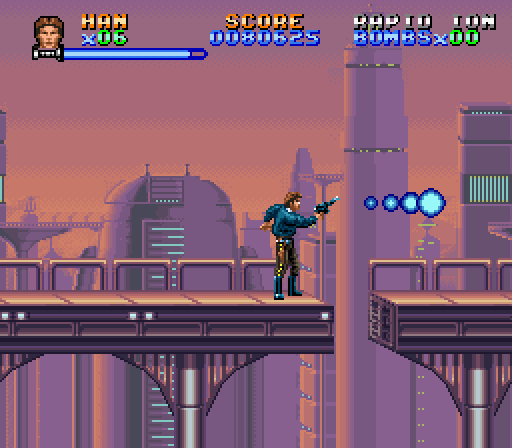 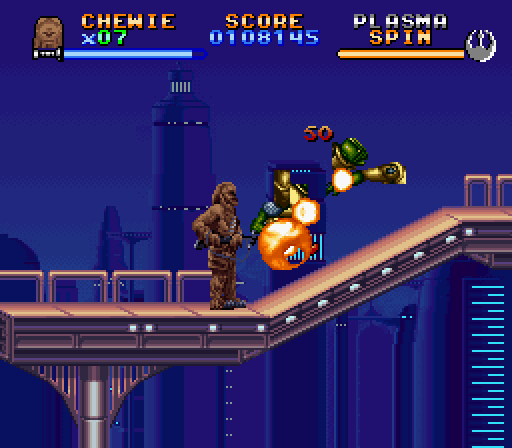 I actually liked the way the game handled its story progression in general, though. Even with the tedious flight sequences in there, the game managed to find a solid, varied vibe from one set piece to next. Unlike in the previous game you don't get to pick your characters here (in part because the story doesn't allow for it) so you have to learn to play each character and each game style. I liked that as it forced the variety to the forefront and made you appreciate the effort put in. The game has a solid mix of elements that work really well.

With all that said the end of the game still can't quite resist its worst impulses. By the last couple of stages the game really starts spamming out enemies and traps. That, combined with a numbeer of jumps that required blind faith to make, ratcheted up the difficlty a little more than I liked. It wasn't as bad as the previous game but it was still pretty obnoxious. I really wished the designers could have resisted this and kept the pace of the game fair, but I guess that's still a part of the Super Star Wars DNA.

Overall Super Star Wars: The Empire Strikes Back is an improved title. It's still not perfect, and can at times be frustraiting, but in general it makes the moves needed to be an interesting and playable game. Hell, somtimes it might even be considered fun.