Get Back to Work, Luke

And now we reach one of the big milestones of the classic gaming era. We've covered a number of titles for various systems from the 1980s onwards but here, with this Star WarsThe modern blockbuster: it's a concept so commonplace now we don't even think about the fact that before the end of the 1970s, this kind of movie -- huge spectacles, big action, massive budgets -- wasn't really made. That all changed, though, with Star Wars, a series of films that were big on spectacle (and even bigger on profits). A hero's journey set against a sci-fi backdrop, nothing like this series had ever really been done before, and then Hollywood was never the same. title, we get into the next level of gaming in the Galaxy Far, Far Away. The older games all had their charms (well, except maybe Star Wars: Droids), but now we're getting into truly official Star Wars games. This is where LucasArts gets involved and all the gamers stood up and took notice.

To be fair, that doesn't mean any games of this series -- a series covering all three original films on the NES, SNES, and other systems -- are necessarily good. Heck, a number of them are actually pretty terrible. The difference, though, is that these are "officially terrible" games. They came right from the source, LucasArts, and had their seal of approval. Everything before was officially licensed, but these games were made by the true Star Wars team and that lends an air of authenticity you couldn't get anywhere else. And, for the most part, the games do a decent job of providing the Star Wars experience gamers were looking for at the time.

The series (which totals five games, two 8-Bit games and three 16-bit games, developed in parallel) starts with Star Wars. We'd call it "the original 8-bit Star Wars" except the Famicom game beat this one to the punch by four years. Plus, this title was also released on the Game Boy, the Master System, and the Game Gear. It had a wide and deep audience of players looking for that authentic Star Wars experience and this game... sort of gets there? Like with the Famicom entry some creative liberties are taken, although nothing as egregious as some of the asides in the Japanese game.

The game starts off with Luke, in is speeder, out in the desert looking for R2-D2, who has run off to find General Kenobi. Luke can explore a series of caverns on an open stretch of desert, looking for the droid and it's so-called master. Once Luke finds Obi-Wan, the master Jedi gives him a lightsaber and sends the boy off to Mos Eisely to secure transport. Battling ensues both in the caves of the desert and then at the hive of scum and villain that is Mos Eisley, all before the heroes meet up with Han Solo to get passage on the Millennium Falcon.

From there the guys book it to Aalderan only to find an asteroid field where the planet should be. They fly through the field but then get snatched up by the Death Star. The guys have to battle their way through the ship to save Leia, then shut down the tractor projector, all before getting back on their ship to fly off to the Rebels. Finally, at the Rebel base, Luke boards an X-Wing and flies off to the Death Star to ride that trench and blow the hell out of the space base. Celebrate with medals and everyone goes home.

As you can see from that summary things are presented pretty straight in this version of the game. There's no weirdness like various battles with Darth Vader as he turns into different monsters. Hell, Darth Vader doesn't even show up in the game at all (because Luke, Han, and Leia -- the only playable characters here -- never fight him in the movie). There aren't any asides to random planets, nothing from the later movies. This is a pretty normal adaptation of the original film, or at least as far as you can get turning a plot0heavy sci-fi epic into a platforming run-and-gunner.

Fans of the original film will, of course, take some exception with the narrative deviations the game enjoys. The movie, for instance, had Luke ride off into the desert then quickly finding Obi-Wan (who saves his ass). Instead we have Luke exploring a sand crawler, going through various caverns, and driving around like a kid doing donuts in the sand across the Great Sand Sea. The opening third of the game is probably the loosest part of the adaptation as there's a lot of story but not much action at all in the first act of Episode IV: A New Hope. We can cut the film a little slack.

From there the game does settle down a fair bit. Space flight sections through asteroids, fighting TIEs, and across the Death Star all come at the expected points in the story, and a big push through the Death Star itself might seem a little long but it still doesn't deviate that far from the original film. All things considered this game does deliver on the promise of an "authentic experience," so that's one leg it has up over the Famicon iteration.

With that being said, I don't really feel like the game is really that fun to play. There are flaws with the title that hold it back, the biggest being its challenge. The game does give the play a health bar, and lots of lives, so it's not as tough as the Famicom edition. At the same time, those lifelines only serve to drag out the painful experience. Now instead of dying instantly to bad platforming you take damage a few times before dying due to bad platforming. The platforming itself, though, is still terrible. The characters are too floaty and they slide like crazy, making this a game where the basic controls have to approached like you're walking on glass. Be very careful... and you'll still get hurt. 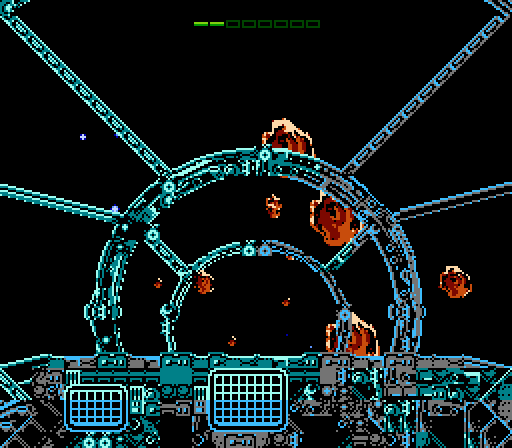 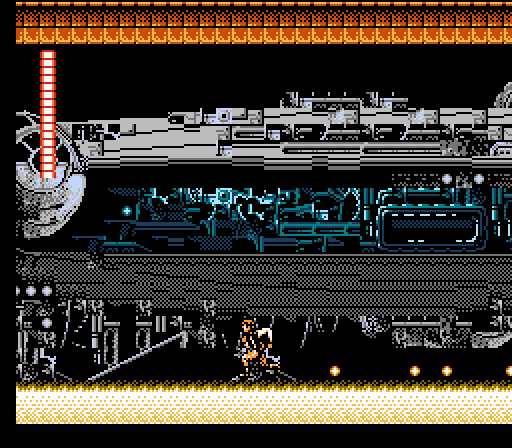 While the platforming is bad, the shooting is also terrible but for the complete opposite reason: it's an absolute joke. Luke's pea-shooter isn't great, but once he gets his lightsaber he's a monster up close. Meanwhile Han has a rapid-fire gun that can mow down anything. Once you have both characters you have more than enough firepower to levels everything that comes your way. And since there aren't any bosses in the game (not like real, massive ones) everything dies in just a few shots and it's over. The balance, in effect, is way off.

I don't want to make it sound like this game was a terrible experience. It's not, it's just not great either. This wasn't the first game the studio made, but it was their first on this generation of consoles and it certainly shows. There's something off about the engine, and the game balance, that really needed a little more fine tuning. it's playable, but not really fun, in that way so many imbalanced NES games could be. Deep down, all you really want is for the game to be better than what was presented.