While there had been Star WarsThe modern blockbuster: it's a concept so commonplace now we don't even think about the fact that before the end of the 1970s, this kind of movie -- huge spectacles, big action, massive budgets -- wasn't really made. That all changed, though, with Star Wars, a series of films that were big on spectacle (and even bigger on profits). A hero's journey set against a sci-fi backdrop, nothing like this series had ever really been done before, and then Hollywood was never the same. games before the 8-bit effort from LucasArts, it's fair to say that at the very least they felt like incomplete efforts. Even the best games to come out in t he 1980s, the Star Wars arcade game or the Atari 2600 recreation of the battle of Hoth in The Empire Strikes Back, the experiences offered by these games were short. They were fun, but hardly could keep interest for more than a few minutes. Other games, like 1987's Famicom Star Wars were far more complete but also wildly inaccurate. It was th 1991 game from LucasArts that really set the stage for better Star Wars experiences.

One year later, LucasArts were back with a sequel adapting the second movie, The Empire Strikes Back. That said, calling it a sequel does seem a tad inaccurate. While it does adapt the second movie (after the previous NES game adapted Star Wars), the two titles feel very different. The graphics are different, they play differently, and in most respects they feel like they were designed by different teams (which they were). This is a sequel only insofar as it followed the previous game in story, although that's not necessarily a bad thing.

Picking up after the previous adventure, this NES and Game Boy game (Sega consoles weren't invited to the party this time) follows (loosely) the events of the second film, all from Luke's perspective. We start out on the planet Hoth with Luke out on the search for a fallen meteor which, as it turns out, is actually an Imperial probe droid. From there, after finishing of the droid, Luke then has to aid in the Battle of Hoth, taking out AT-ATs. Then he has to help secure the ice base and ensure everyone escapes. He's clearly a one man army aiding the Rebellion.

From there, Like ventures off to Dagobah to train under Master Yoda (although, in fairness to Luke, he already has access to basically all of his Force Powers). After a solid stint learning the ways of the Forces from the little froggy Jedi, Luke gets a mind-message from Leia calling out for help. Luke hops in his X-Wing and, after battling Imperial ships at Cloud City, lands on the sky base. He saves Han, kills a bunch of bounty hunters, and then takes on Darth Vader for the fate of the Galaxy. All in a day's work for the best Jedi alive.

As you can probably tell, the plot of the game isn't entirely faithful to the original movie. While the broad strokes and set pieces are the same, certain details have been changed not only to keep the focus on Like but also to give the game a more upbeat finale. That last bit is important since there was never a third 8-bit game in the series (due to the era when these were all coming out). After this LucasArts switched to development of games for the SNES with their Super Star Wars series so ending this game with an upbeat swing was probably essential so kids didn't feel let down when a third NES title failed to appear (Sega kids were left cold and sad, though).

Some of the plot deviations do make sense. Having Luke get taken out by snow creatures would mean Han would have to be a playable character, which wasn't in the cards here. Instead, Luke is the only guys players have this time around so, clearly, he couldn't be laid up for a bit. Didn't make sense. Other changes, though, are a little stranger. The whole last act at Cloud City is one anachronistic story detail after another. Like kills bounty hunters. Like kills Boba Fett (by blowing up Slave One). Luke save's Han. Luke sends Darth falling off the city. None of that was in the movies so, if you were hoping for a nice and authentic experience you would have had to look elsewhere.

As far as the game play was concerned, I'm frankly on the fence with this adventure. It's both easier and harder in weirdly inscrutable ways. Luke is a powerhouse this time, gaining all kinds of Force powers to play with over the course of the adventure. These are hidden, Metroidvania-style, throughout the various levels of the adventure so if you're willing to explore around each of the cavernous, maze-like stages you can get a lot of powers very early and become quite the tanky Jedi. That art is fun.

It feels like to balance that out, though, the designers went overboard with enemies and bosses, making everything a little too tanky and powerful. Luke eventually learns how to swing his saber, and use his blaster, with boosted Force power, so the bosses also get the ability to absorb a lot of hits if you aren't using those Force-enhanced powers. You only have so many Force points to spend, though, so you'll have to constantly be on the look out for power-ups and ammo. It's a constant quest to find your next fix before the next overpowered enemy shows up, all when most of the time you just wish you could focus on the maze and get out. Balance is off in very weird ways.

As for Luke himself, he really could have used some adjustments as well. His very floaty (even before you get Force Speed and Force Jump), but he can also stop on a dime without skidding, so there's this weird sense of control without control over his character. You'll go careening off and then some land on a spot without any momentum, which takes a lot of getting used to. Land wrong, like on an enemy, and you could suddenly find yourself soaking a ton of damage because, for whatever reason, Luke has next to no invincibility frames when he gets damaged. Get clipped just right and you'll lose most of your meager health bar (or, more likely, just die). 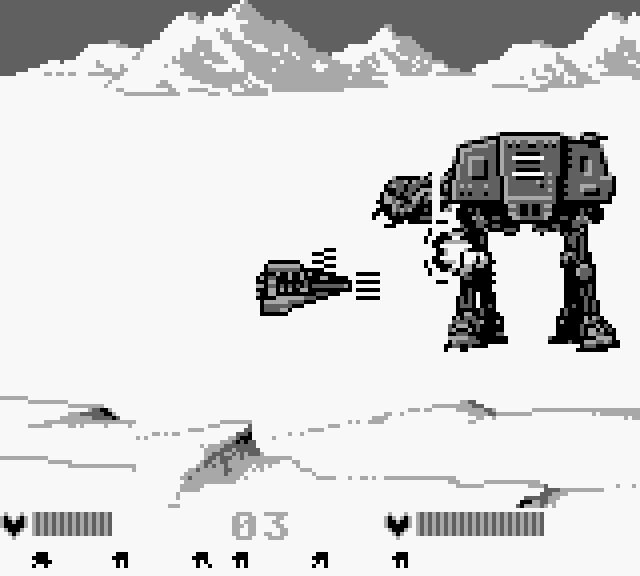 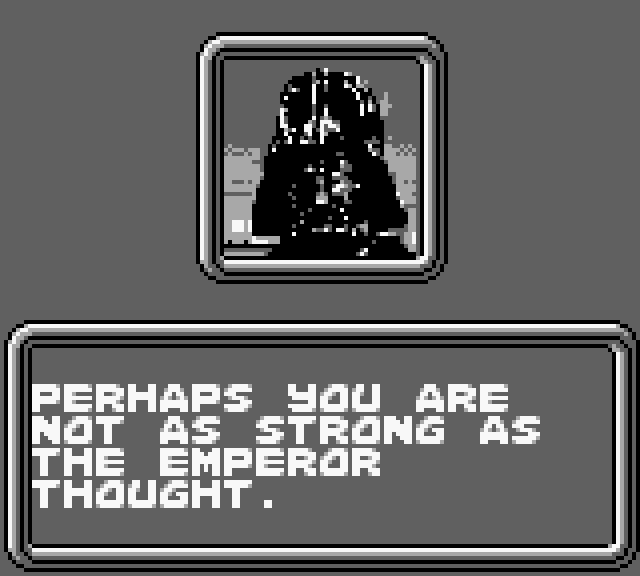 The balance of the game, really, is just off. It takes a lot to master the game and muster the energy to battle through all the maze-like levels in this hour-plus length game. That's a tragedy, too, because there are some great moments in the game. I really liked the Battle of Hoth sequence which felt like a great recreation of the 1980s video game experience, just enhanced. The sky battle over Cloud City was also fun, and if we cold have had a few more flight sequences like these and maybe a little less cavernous exploration I think the game would have felt more engaging and interesting.

As it stands, the best i can say is that 1992's Star Wars: The Empire Strikes Back is a flawed experience with some interesting ideas. I like the concept of a Metroidvania exploration game with some space travel sequences thrown in. If this game could have balanced all of its elements better it would have been a real winner. Instead it doesn't quite rise to the occasion before ushering out the 8-bit era of Star Wars games.