We tend to think of Keanu Reeves as a big star. Sure, not all his movies are huge successes (just look at the failure of The Matrix Resurrections at the Box Office) but his movies are generally well received and he has way more hits than misses. His movies are sold on the power of his name and audiences tend to flock to one of his movies, especially if they know he's going to be kicking all kinds of ass. He is a driving forces all on his own. 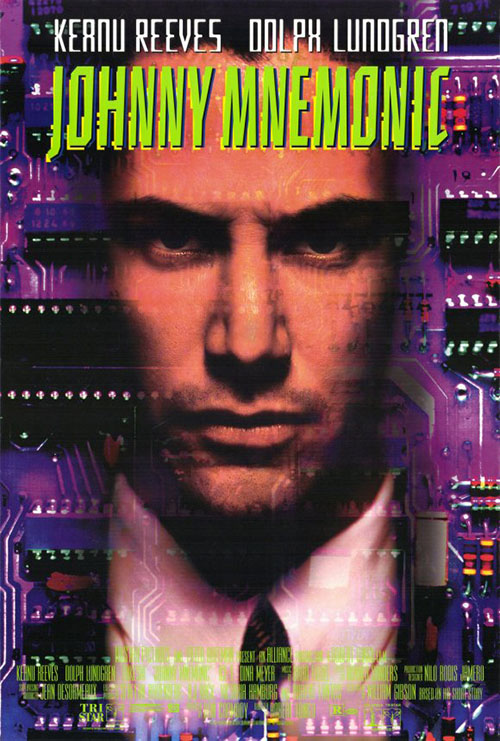 It didn't used to be the case, of course. After a couple of early hits -- Bill and Ted's Excellent Adventure, Point Break -- it did take time for Keanu to become the bona fide action star he is today. His rise was powered by a couple of solid films -- Speed, The Matrix -- and then cemented by John WickStarted as a tale of redemption and then revenge (in that order), the John Wick series has grown to be a adynamic, reliable action series that doesn't skimp on the hard hits and gun-toting thrills, elevating Keanu Reeves as one of the greatest action stars ever., but there was a time where Keanu's name wasn't the selling point it was now. A thin strip of the early 1990s where Keanu was more joke than A-list star.

Hailing from right before Keanu's big turn in Speed, 1995's Johnny Mnemonic is a curiosity in a number of ways. It was Keanu doing action/sci-fi before he was credited as a big action star. It was him delving into cyberpunk themes before The Matrix made it cool. It was kind of a superhero film before those movies became the big blockbusters they are now. It's all the trends that would redefine Hollywood but made at a point when studios wouldn't give these concepts the time of day. That makes Johnny Mnemonic a film ahead of its time, even if the resulting movie wasn't actually all that great.

In the film, Keanu stars as the eponymous Johnny Mnemonic, a hacker and digital information courier. Johnny has an implant in his brain (at the expense of his childhood memories) that lets him store up to 160 Gigs of data (it's 80GB by default, but can be expanded for a time to 160GB). As a data courier it's his job to take illegal or illicit files across national boundaries, sneaking this data through in the only way it can be transported in the future (as just sending the data over the Internet will likely be detected). Only problem is that the files he's been contracted to transport from Beijing to New York is well past his standard limit, clocking in over 320GB. He takes the job anyway, but the data would have to get removed quickly or he'll suffer permanent brain damage.

Naturally things go south quickly. The techs that put the data in his head are quickly killed by the mega-corporation they stole the data from, and the crypto-key used to pull the data out of Johnny's head is partially destroyed. Johnny only has half, and the rest is floating out there, somewhere, possibly on a fax machine in New York. Johnny has to get to New York, get the key, and find someone that can unload the data lest he die. Oh, and the data might just save all of humanity from a plague that's killing everyone. No pressure. 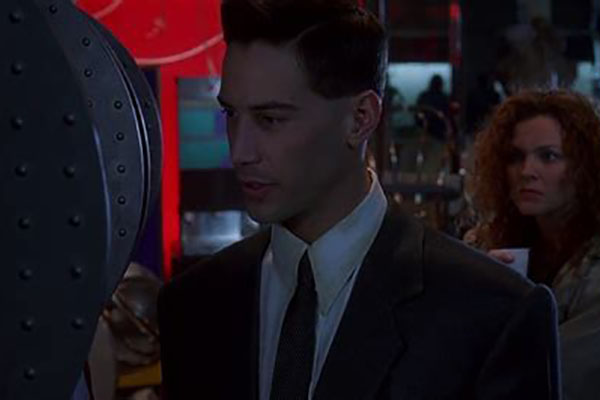 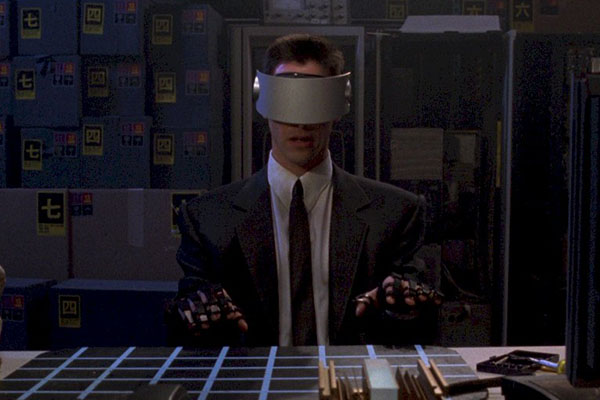 Johnny Mnemonic certainly doesn't lack or ambition. Based on a William Gibson story, the film tries to pack in as much of the cyberpunk dystopian world as could conceivably be filmed on a mid-range budget for 1995 with the effects know-how how that era. It tries, in an endearing way, crafting a ramshackle production that bounds about, frenetically trying to show us all of this world. It has a rich world buried under its story, with mega-corporations, hackers, body-mods, am expansive digital underground, a world-wide cyber plague, and a freedom force fighting the system, and its desperate to make sure it gets as many of these details as it can into the film. It's a coked up, strung out version of The Matrix, just with a crew that wasn't really sure how to make that kind of film.

Frankly, the film dates itself immediately. It's a movie that really could have only come out in the mid-1990s because, even five years later, this movie would have used The Matrix as a direct influence. They play in the same well, from hackers jacking themselves into the mainframe to a dystopian world of heroes against "the machine". Instead of drawing inspiration from the films that came out only a few years later -- the cyberpunk of The Matrix, the superhero tales of Blade and the X-MenLaunched in 1963 and written by Stan Lee and Jack Kirby, the X-Men featured heroes distinctly different from those featured in the pages of DC Comics. Mutants who didn't ask for their powers (and very often didn't want them), these heroes, who constantly fought against humans who didn't want "muties" around, served as metaphors for oppression and racism. Their powerful stories would form this group into one of the most recognizable superhero teams in comics (and a successful series of movies as well). -- it has to draw ideas from its contemporaries instead. The dystopian vision comes from Escape from New York, the production design feels influenced by Tank Girl, the CGI comes courtesy of The Lawnmower Man.

These qualities do make it watchable, in a time-capsule kind of way, but they also make the film harder to watch if you're not in the mood for silly, cheesy schlock. Watching Keanu's character jack into the Internet via a VR headset, waving his hands around like he's an extra on Minority Report, is beyond silly. All the characters earnestly talking about the dystopia while standing next to a cybernetically enhanced dolphin is beyond silly. So much of this film simply doesn't work, a wild and strange amalgamation of ideas and effects slapped together to make a vision that 1995 wasn't quite ready to birth. We were on the cusp of something with this film, and the ideas at work deep in the script are solid -- this film saw the Internet becoming bigger and bigger, it new corporations were our future overlords, and watching a film with a nasty plague in COVID times does feel prescient -- but the movie as a whole falls flat.

The movie works so much better when you view it as a first draft of The Matrix to come. It's hard not to make that comparison, not only because of the story and setting but also because Keanu is right here, in the middle of it all, being "The One" of a sort. Keanu is actually a pretty good fit for this role (aside from the times where he's asked to overact, something the actor has never been good at, creating laughable results), and he actually is able to see his character being a web hacker. Comparing this film to another film about hackers, Hackers (which also came out in 1995), this movie does a much better job of trying to portray 3D-space 'net exploration (even if it's still dumb), and Keanu does a much better job of selling the jargon and techno-babble. There's a core here that works and you can see why the actor was brought in (eventually) for The Matrix. He could sell it. 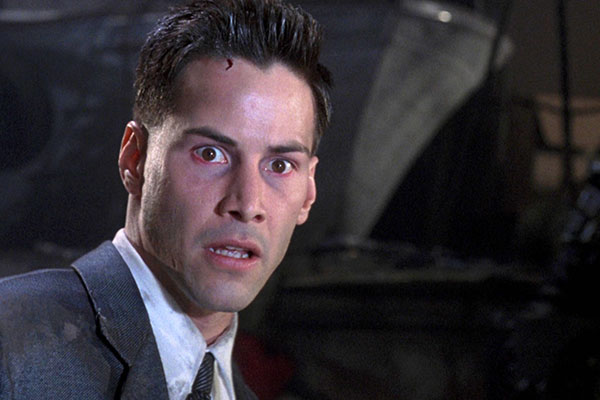 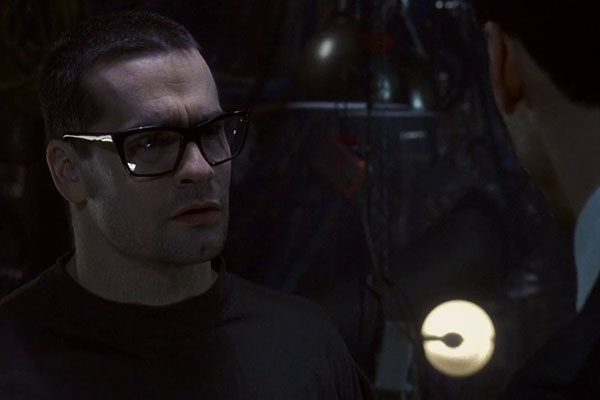 Still this film doesn't work well enough to stand the test of time. The only reason to watch it, really, is to see Keanu doing The Matrix before The Matrix. On all counts this film was out-classed by the films to come. It's a movie that saw th future of Hollywood spectacle but came out a little too early to be able to portray it all properly. In a different era this film could have been the launching point for a franchise. Instead it's treated as a footnote to a larger franchise that was soon to come.

But man, is it trippy going back to this film 25 years later. It's a dumb film but hilarious to watch in that "so bad it's good" kind of way. I can't recommend Johnny Mnemonic to anyone, really, but it was a fun way to spend an hour-and-a-half in a schlocky nostalgia-trip.