It's fair to say that the original 1999 The Matrix is a seminal film in the sci-fi and action genres. An attempt by The Wachowskis to create a new kind of superhero film, the movie revolutionized how action was filmed and choreographed, and it went on to be a solid hit at the Box Office (pulling in close to $500 Mil at a time when films rarely did that). It presaged so many trends of the modern Box Office and redefined the tech around them, plus it had a kick-ass story and simply rocked. It's legacy lives on even two decades later. 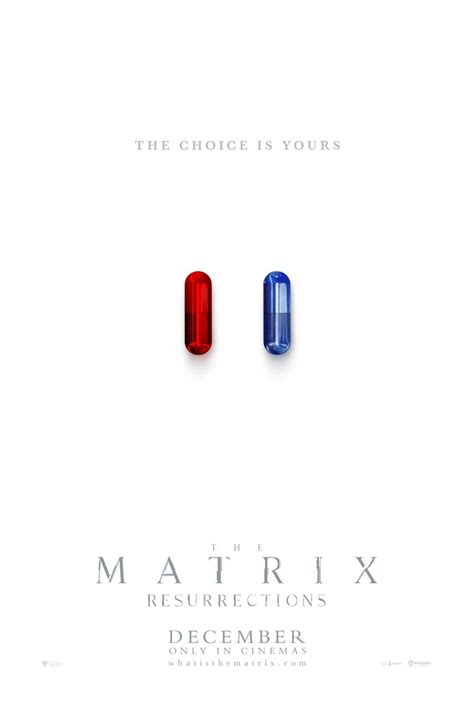 The same, though, can't be said about its sequels. We revisited both The Matrix Reloaded and The Matrix Revolutions back three years ago as we ran through the series for this site, and, even setting aside any previous memories of the movies, trying to watch them again with fresh eyes... they are certainly films that happened. That's about the kindest you can be to those two ill-conceived movies. While Reloaded has some interesting ideas, and some really awesome action set-pieces, it's story is hollow, waiting for something to fill it. That something would have presumably been follow-up Revolutions, but that film is just plain bad. It was bad enough that it sank the franchise for twenty years. People went from talking all about The Matrix to collectively ignoring the franchise even existed (well, except for the first one).

While the aura around the original film has been burnished over time its doubtful that anyone (outside of production studio Warner Bros.) was really itching for yet another Matrix film to come along. How do you dig yourself out of that mess? How can you reboot or continue a franchise that so thoroughly botched its own ending that any thought of further sequels was automatically rejected by the human collective consciousness? The answer is simply to take the film back to the beginning, do a lot of the same motions again, and then leave the franchise more or less where it was by the time the first film wrapped. In short, The Matrix Resurrections doesn't really redeem the sequels, instead acting as a mea culpa to get the franchise back where it should have been all along. That makes it a pretty solid continuation, or finale, but it doesn't make it seem any more essential than the other sequels, long term.

In the film we're introduced, once again, to Mr. Anderson (Keanu Reeves). We know, of course, that he's Neo, the all-powerful "The One", who sacrificed himself at the end of Revolutions to strike an uneasy peace with the Machines and save the remnants of humanity. Since that ending, when people in the "real world" thought he died, Neo had his code re-injected and his body resurrected and reinserted back into the Matrix where, for 60 years, he's been living a life as Mr. Anderson, over and over again. Now a game developer inside the Matrix, Mr. Anderson spends his days working on his magnum opus, "The Matrix", a series of three games with, potentially, a fourth one on the way. These games were smash hits (in the Matrix), but Anderson himself is nothing but bored with his reality. Bored, and confused, and isolated.

Anderson feels like there's something more going on, although his therapist (Neil Patrick Harris) says its just part of his psychosis, that he's losing touch with his reality. But when Morpheus (Yahya Abdul-Mateen II) comes out of the game world into Anderson's world (our of the Matrix-Matrix and into the Matrix, if you will), Neo is socked out of his reality. With the help of Morpheus along with Bugs (Jessica Henwick), captain of the Mnemosyne, and her crew, Neo is able to escape the Matrix once more for the real world. There he finds the humans prospering, expanding their city alongside a number of machines that have joined the humans since Neo's sacrifice. However, not all the machines are honoring the peace, and the Matrix isn't releasing people like it was supposed to. Neo has to go back to find the controller, to work to save humanity and, as he soon realizes, to save Trinity (Carrie-Anne Moss) as well. 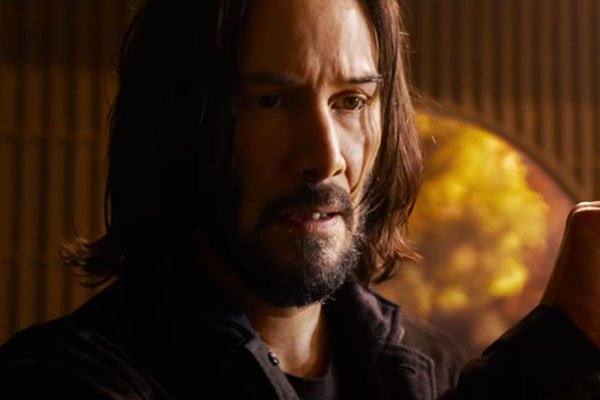 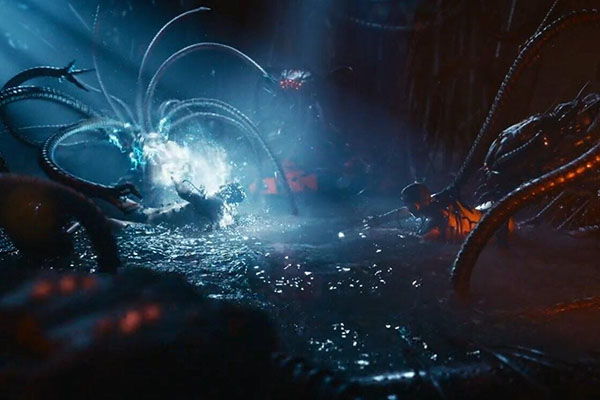 So let's cut to the heart of the matter: having watched all four films in the series I think the clear take away from the franchise is that The Matrix didn't need any sequels. The original film is an origin story, yes, but the way the film sets itself up it has a slow escalation for Neo, from common office drone to fully-powered god that can control all of the Matrix with his mind. That evolution over the course of the film gives you the full arc of the character. There isn't really anywhere for Neo to go from there, as the sequels proved. Neo was at the end of his journey so the films had to focus, more and more, on the other characters -- Trinity, original-recipe Morpheus, Niobe (Jada Pinkett Smith), Agent Smith (Hugo Weaving), and more -- just to get enough drama and story going. The films became less about Neo and more about the world of the Matrix, to uneven results.

No one really loves the sequels. Sure, those films have their defenders, but people would have been just as happy if the films basically had never happened. The original Matrix tells a complete story, with an obvious end-point for the franchise. That's what The Matrix Resurrections clearly illustrates: the whole film boils down to pushing the reset button so we can once more get Neo on his personal journey and, eventually, back to where he was at the end of the first film, brushing aside as much of the sequels as can be ignored and keeping only the bits that actually help continue Neo's journey forward.

I don't want to spoil a lot here -- we'll have a more detailed spoiler discussion elsewhere -- but I do want to note that this film really isn't about pushing the series forward. There aren't a lot of new ideas here, new things that really change our view of the Matrix, of the characters, or the world around them. The first film was revolutionary while at least the second film did try to push the tech of the movies forward. This film plays in the same sandbox, using the same ideas -- redoing scenes from previous films, reusing ideas and characters from those sequences -- to iterate on what worked before. But where the original film really was a shock to the system for action movie fans, this four-quel seems much more content just trying to be the best remaster of the original it can be.

That's not to entirely disparage Resurrections, mind you. I did enjoy much of this film for what it is, and certainly this is the best Matrix sequel we've yet gotten. That might sound like damning with faint praise but it's a legitimate comment: this film is miles better than Revolutions and certainly edges out even Reloaded. None of them hold a candle to the original, but this one at least gets the closest yet to giving that film a sequel it deserved. It just doesn't feel essential. 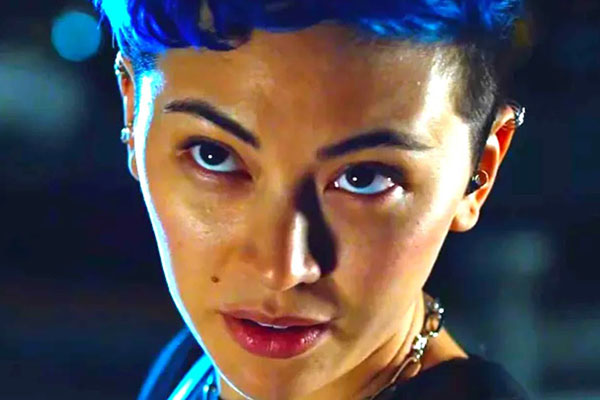 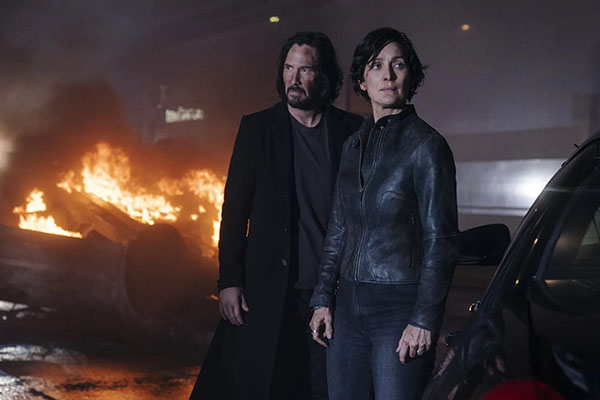 For all that the film gets right -- the acting is solid, the visuals are great, the action is at times on-point -- there's still a vital piece of the puzzle missing. Neo gets a journey to go on this time, recapturing who he was so he can once again be the savior humanity needs, but it's a journey going through the same motions we've already seen before. That's a big issue this film has: all its best ideas, its best characters, its best moments come from other films (mostly the original) so that it feels like a hollow copy of superior material. That's part of the film's commentary on itself, I'm sure (all the jabs at "sequels" it makes shows the production team at least knew there was some joking to be made about all this) but that doesn't stop the film from feeling a little flat, a little empty all the same.

What this film really does is reestablish Neo and Trinity as heroes for this world, and should there be further sequels to the franchise (doubtful considering this film isn't doing well at the Box Office) it puts them in a space to maybe finally find some new ideas to explore. Or, at the very least, it puts a cap on the franchise that says, well, mostly what the first film said all along. However you look at it The Matrix Resurrections is both the film that redeems the sequels and also one of the least essential parts of the franchise. We still didn't need any sequels to the original film but, if we had to get them, this is at least the best of the set. I still expect to only watch the first film regularly, though.