Going Back to the Well Again

It's fair to say that the original Blaster Master is a classic. Plenty of games came out during the NES era, and many of them had longs tails of releases, fandoms that lived on for some time, but the original Blaster Master, despite not being the biggest hit at the time, has lived on in the minds of fans, and the collective video gaming community long into the decades since it's release. 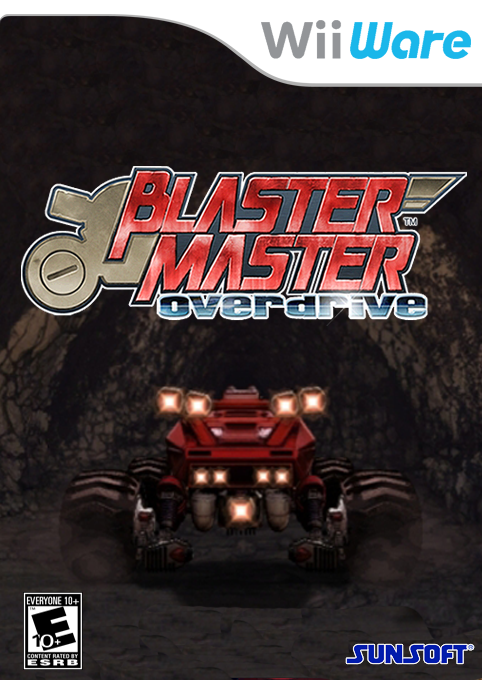 That's especially impressive considering that none of the sequels ever lived up to the potential of the original. They were either bland, or bad, or simply added nothing really of interest to the formula of the original. Fans continued calling out for new games in the series, but every time production company Sunsoft hit the well -- whether in a little-loved direct Genesis sequel, a Game Boy Color title that reused all the assets of the original, or a PlayStation title that tried, and failed, to update the concepts of the original for 3D game play, nothing the company commissioned hit the mark. Fans were always left feeling hollow by Blaster Master's follow-ups.

Naturally it had to be some some trepidation, then, that in 2010, Sunsoft announced yet another remake of the original game (after Enemy Below also remade the game), this time taking the series to WiiWare. While there was nothing inherently wrong with a WiiWare title, it did set off some alarms with fans as generally those games were just rehashes or cheap shovel-titles made to bank on a more popular name. Just what, exactly, would Blaster Master: Overdrive turn out to be? The answer: a rehash and a shovel-ware title all in one. That's not to say that everything the game did was bad, just that the good parts of the game are mired in a lot of cheap choices and bad decisions that certainly keep this remake from reaching its full potential.

In the game our hero, now names Alex, is a world-leading biologist who also happens to have access to a tank called S.O.P.H.I.A. Alex and his tank are called into action to battle an alien virus that as infected the underground of the Earth. Without Alex's aid in defeating the bio-mechanical bad guys that lie beneath the surface, killing the infection off quite literally, the Earth could be taken over at any moment. It's time to rev up the tank and drive deep underground for the gate of all humanity.

The start of the game feels pretty much like you'd expect. Alex, in his tank, is dropped right into the middle of the action in a cavern, ready to go blast some aliens and explore your way to the end of the game. SOPHIA (we'll go without the periods from now on) can drive, shoot, and jump and, with upgrades, perform many more tasks just as you'd want from your upgradeable machine. Some things are different from the original: your life bar is pretty short to start, instantly letting you know that upgrades will be scattered around the world for you to find. This also applies to Alex as well as he, too, has very little health at the beginning of the game. But it's in the energy meter that the game really starts to show the changes that have been made. 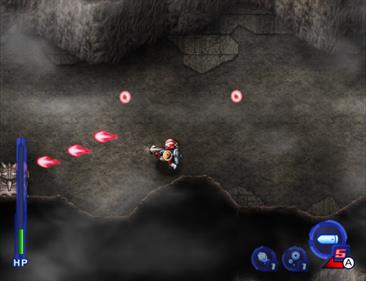 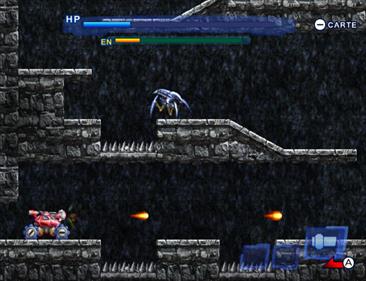 In the original title SOPHIA could drive, shoot, and climb all over without it costing anything. The only time a special kind of "fuel" was needed was for its hover capabilities which, as part of the challenge of the game, would burn through its hover fuel really quickly. This has been changed in the new game to a unified energy meter. Everything that SOPHIA performs, from shooting to hovering, blasting its new grappling hook to climbing walls, requires energy and it will steadily chug through that bar as you perform these actions. Any time you pause your tank and sit still you gain energy back so there's absolutely no need to farm for hover fuel.

On the one hand I appreciate the change away from hover fuel, for sure, and I can even see the sense in the health and energy upgrades scattered around the game -- it adds an element of Metroidvania to the game play and allows you to feel more powerful as you collect upgrades and work your way through the game. At the same time, though, the energy meter really sucks and that's because the only way to charge it is to stop and wait. Yes, speed runners would hate this as it forces a more methodical play experience, but just in general it felt like the game got bogged down more than the original.

When you play the original game it's always a push forward. Even when you're having to backtrack across an area you're doing it to get to the next area, so you're pushing, always pushing. You drive, you shoot, and you try not to stop and let the enemies build up and get to you. That's not the game play flow here, though, because your fuel meter, for all that it'll fill on its own when you stop for a bit, will run out if you're constantly running and gunning. It just has a different game play loop.

This is, frankly, exacerbated by the way the Metroidvania aspects are worked in. because the little power-ups are scattered everywhere you're going to spend a fair amount of time looking to collect these items, checking every nook and cranny (and trying to remember where the last ones you saw were). At a certain point I really wished I didn't have to go into another long dungeon with Alex to find yet another health power-up but I did it anyway because, if I didn't, I'd pay for it in the late game when I needed all that health. 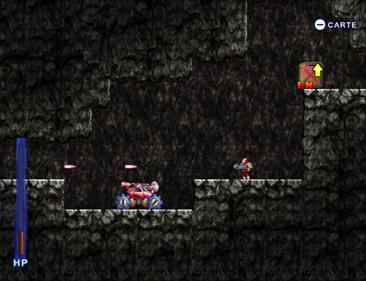 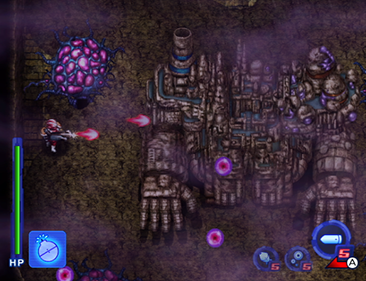 It certainly doesn't help that the game basically gives up about the halfway mark in making any of the collectibles hard to reach or interesting to find. Eventually the items are just dumped at the end of a dungeon, sometimes in pairs (as if the devs said "we don't have the time, or desire, to make more dungeons for these"), while other power-ups are literally just dropped right in the main path your tank would take anyway. Hell, the last tank health and energy drops are literally right before the end boss door right when you don't need them anyway. What's even the point of that?

Also counting against the game is that it's just uniformly bland looking. In contrast to the original game, where every zone had its own style and feel, all the areas in Overdrive look the same. It's one zone of barren rock caverns after another, with only occasional color changes to denote "ice" or "fire" areas. It reminded me a lot of Blasting Again in that regard as that game, too, was populated with a ton of bland caverns all with slightly different colors to denote different "zones".

All of these flaws add up to a game that, at the very least, feels rushed. Despite that, though, there is a central core to the game that I did rather enjoy. It felt good to once again get into SOPHIA and blast around for short bursts. The zones weren't complicated or that interesting, but they also weren't the hours long slogs of Enemy Below so I could just focus on driving and enjoying the basic experience. On top of that I also appreciated that this game tried to put in some new power-ups -- gun upgrades for Alex's missiles as well as his gun this time, plus a grapple shot and dash jets for the tank -- all of which made the game feel like it was actually trying to be new. The ideas elevate the game a fair bit, I just wish the rest of the game was able to rise to the occasion.

I struggle to call Blaster Master: Overdrive a bad game but it's certainly not a good one, either. It has a few really solid ideas that can't quite elevate the whole past its flaws. I think, if you could get this game on the cheap it'd be worth playing once or twice just for the pure experience of it. Sadly, with it being a WiiWare exclusive, on the original Wii (with that marketplace shut down), actually finding a copy of the game to play is nearly impossible. It's doubtful Sunsoft will ever bring the game back, but if they did (maybe in some kind of compilation) it'd be nice to have it just to see a game that tried. It's not the worst in the series, it's just far from the best.