Back in Familiar Territory

After the release of Blaster Master in 1988, fans of the game cried out for a proper sequel to the classic title. Although it hadn't been a huge hit on release, Blaster Master resonated with U.S. fans (in no small part due to the "Worlds of Power" novelizations that came out as the Scholastic Book Fairs were becoming big in U.S. schools). While the title did receive two sequels -- the Sega Genesis release Blaster Master 2 and the sequel in name only Blaster Master Boy neither felt like proper sequels. 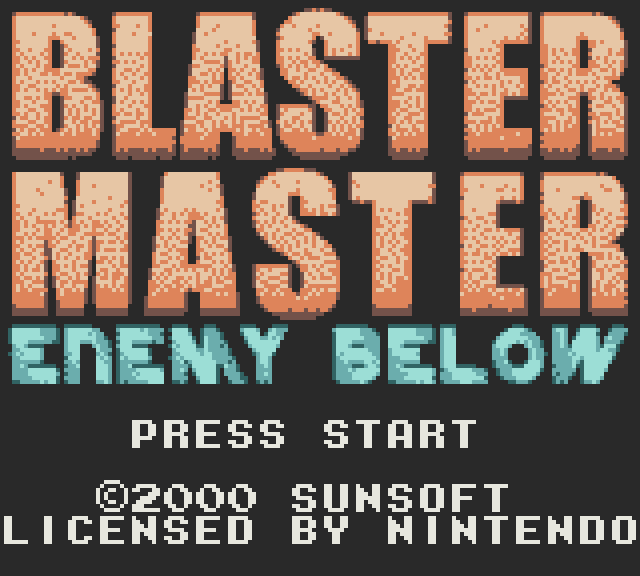 In 2000, when the Game Boy Color was taking over from the original Game Boy, giving kids essentially an NES they could play in their hands, Sunsoft took another crack at fulfilling the demands of fans that had grown up with Blaster Master. The game seems like a direct response to all the complaints that the two sequels strayed too far from the familiar formula of Blaster Master. Thus we have Blaster Master: Enemy Below, a game that feels less like a proper sequel to the original NES game than a "Master Quest" remixed version. Although it looked just like the game fans remembered, this wasn't the title they wanted, once again, due to some very obvious issues.

At first blush, though, this game does look like a proper sequel to the original title, right down to the same sprites and (functionally) the same music playing throughout. Players once again take up their tank, SOPHIA, as they play as Jason, guiding the little guy through eight areas on a quest to defeat the mutants that are once again coming up from beneath the Earth to terrorize top-siders. Along the way Jason will collect all the familiar upgrades (plus a few extra) that will let SOPHIA, and himself, explore all the areas and blast their way to the end boss, thus saving humanity once more.

At first it's kind of neat seeing the original graphics and sounds used for a new take on the material. Grabbing the game, turning it, and seeing the familiar tank as she rides along terrain does bring a certain nostalgic joy. The first issue comes from the fact that there's barely anything that we haven't already seen in title that wasn't already in the first game. All the main upgrades for SOPHIA you expect -- DIVE, WALL 1 and WALL 2, CRUSH -- are all here. Yes, HIGH JUMP is a new ability added in early but it feels like this ability just restores SOPHIA to a jump height she had in the original game, and that brings me to one big issues I had with the game: any new upgrades essentially just restore you back to where you were at the start of the NES game. Jason's gun starts out weaker than in the NES game, SOPHIA starts out more hobbled than she was in the first game, and you're clawing your way back there from minute one.

While I didn't like the Sega Genesis sequel, it did add some new ideas into the series, like the jet pack, and I would have liked to see some new ideas filter their way into this game. None of that is really on offer here, though, making this a game very much devoted to the experience of the original NES game... only slightly worse. There was an opportunity here, with so many elements being reused from the NES game, to add some subtle stuff that could have expanded the title, but Sunsoft didn't take that opportunity and, if I had to guess, it was all about corporate greed. 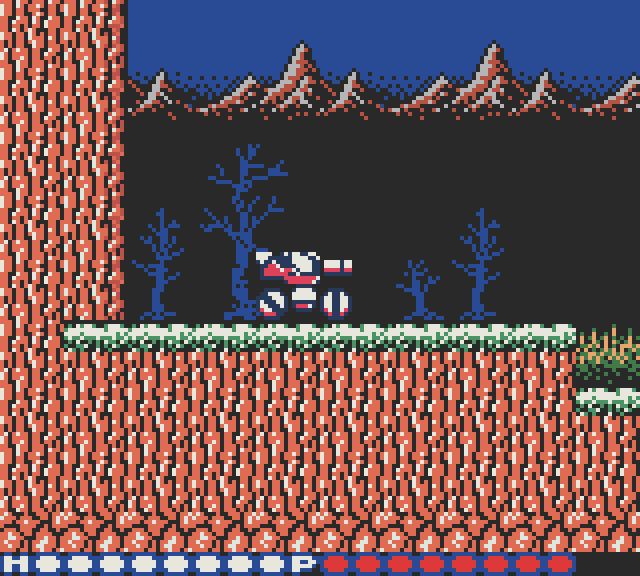 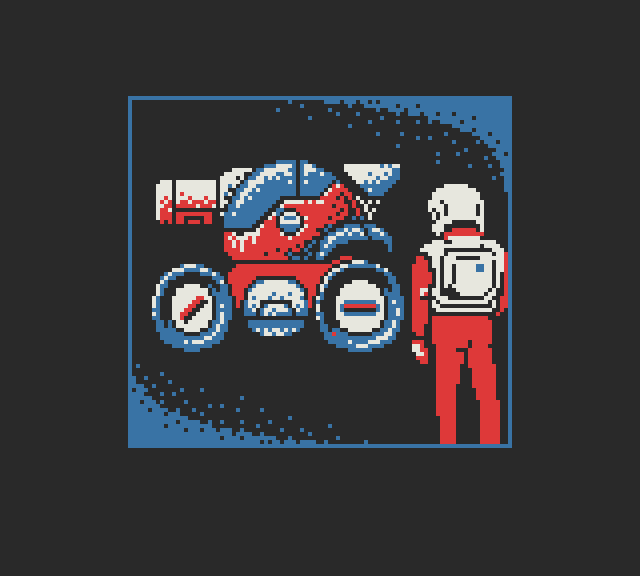 Maybe that's cynical of me, but think about it: Sunsoft cranked out a sequel to the NES game on the Game Boy Color, a system that could basically deliver NES-quality graphics and game-play, and so they reused all the elements of the NES game with only a few select new enemies (a few new bosses that aren't any more interesting than the original bosses from the first game). The goal, clearly, was to kick out a sequel as quickly as possible without making any major changes to the assets all to save money. Maybe the team wanted to honor the fidelity of the original game, but this seems more like an easy cash grab.

Take, for instance, the way SOPHIA controls. The team added in a number of angled surfaces in the game by stringing along horizontal and vertical bricks over and over again. Once SOPHIA has the WALL 1 upgrades, she's chunk her way up-and-over, back and forth, along these surfaces even when, clearly, an angled movement sprite was needed here. But that would have required making new sprites for this game and there are no new sprites (outside those aforementioned bosses) anywhere in the game. It's little moments like this, throughout the game, that makes you question just what the developer was thinking with this sequel.

For fans that had played the original title to death and were looking for something with a new layout to play, this game does deliver that. As noted, all eight areas are back in this title, but the layouts of everything, from Area 1 on, are completely different. You might know the original game but you'd have to relearn where everything is with a whole new world and all new dungeon areas. That is a plus for fans, I'm sure... but it comes with a pretty big caveat: the game in punishingly long.

Each of the Areas has been greatly expanded, adding unnecessary length to the game, not only in its base exploration as you try to reach the next area, the next dungeon, the next upgrade, but also greatly lengthening the back-tracking. Entrances to the areas are buried in other areas, and to get to those you have to traverse the lengthy stages, and then go back, and then forth again. By the fourth time your back in Area 1, having to cross its long stretches again so you can reach Area 2 to get to Area 7, you'd wish the game could have been just a little smaller to ease some of the tedium. 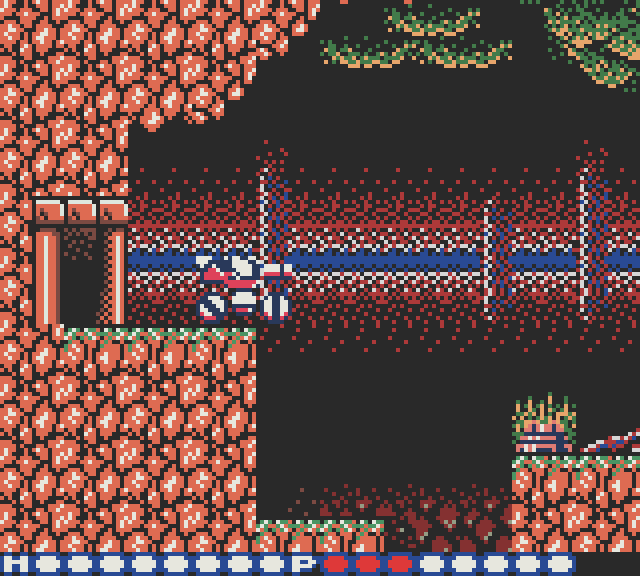 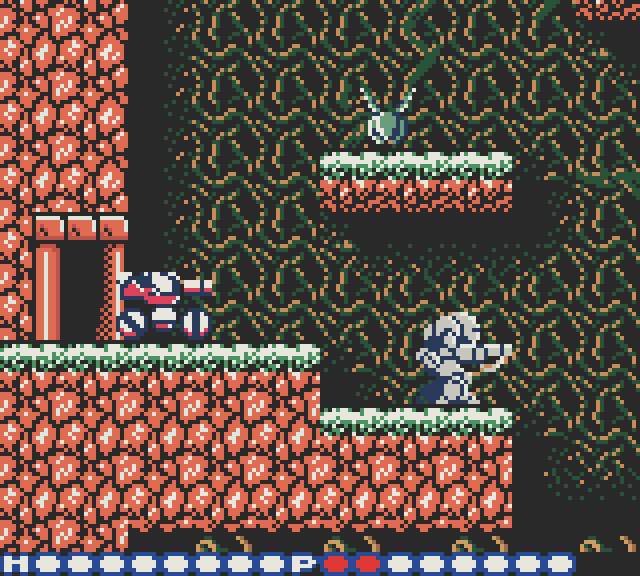 The dungeons, though, are even worse. The original game features not just the eight main dungeons, one per area, where you collected key items and fought the bosses to progress (all to that eighth dungeon that finished the game) but also side areas with little goodies to grab. Most of those areas were optional and you only had to focus on the main dungeons to complete the game. Not here, in Enemy Below, though, because every area features (at least one, up to two in the later zones) dungeons with keys in them to unlock the last dungeon of each area you have to collect the keys, and the key dungeons are often as long, if not longer than the main dungeons.

Honestly, all these dungeons are absolute slogs. They're long, winding, repetitive passageways chock full of enemies. It's not so much about finding your way through, as they aren't complexly laid out dungeons, but the paths are just so long, and sloggy, that getting through them can take several minutes. It's one thing when you have to traverse these dungeons to get to the bosses as once you beat the boss and collect the upgrade item the dungeon warps you back to the dungeon entrance. Sadly, for the key dungeons, you don't get the benefit of a warp back; once you get the key you have to work your way all the way back out. It's an unnecessary ordeal that drags the game out even further.

The game length, more than anything, is the big issue I had with the game. The balance of the original title was such that, yes, it was hard but it didn't linger. You could get good and then power your way through the game in a couple of hours. This game takes the same mechanics, the same ideas, and drags it out for at least another hour, if not more, and that's on a practiced run. I'm sure there are plenty of players that just got lost in the main overworld, didn't have it in them to even bother tracking through the long areas to try and find the next zone, and just gave up. This game defeats you with its drawn out, tedious nature, and it's sad.

This is a game that could have easily been improved -- a few new ideas, a little more emphasis on adding things instead of just drawing out a game we'd already seen -- but that wasn't the plan from Sunsoft or the team. I want to like Blaster Master: Enemy Below but there's just enough wrong with it that I don't feel any need to touch this game ever again. if I want the mechanics of the original game I'll just go back and play the original game.