It Certainly Is Punishing

The Punisher is a troubling hero to have around. back when he was created, when 1970s action flicks were all about wronged men out for revenge and taking the law into their own hands, the Punisher stood as a kind of pen-and-ink play in that genre. But, like so many other comic book characters this superhero stuck around long after the reason for his creation had passed and now he lingers, a blood-soaked vigilante that seems a bit out of step with the world we live in today. A guy running around with guns, killing people because they're "bad" is not a great look currently. 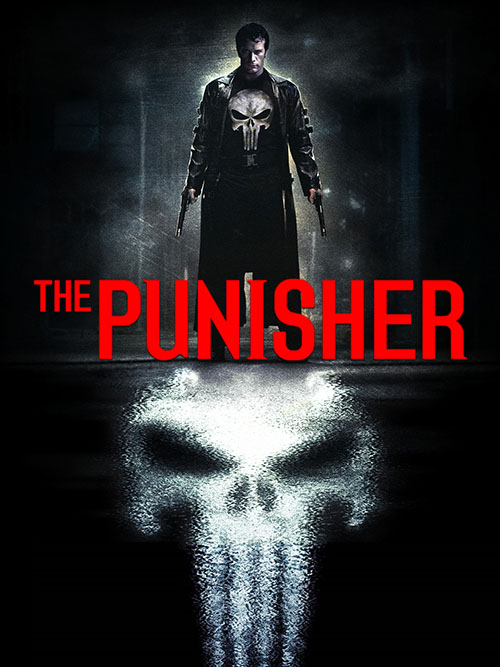 All we have to do is look at all the police officers running around with Punisher logos on their uniforms to think, "hey, you know, maybe you guys are missing the point." The comics never really painted the Punisher as a good guy but more of an anti-hero. Yes, he gets his own kind of justice but a fine line always has to be walked between "justified violence" and Frank Castle just wandering off to shoot dudes because they looked at him wrong. And it's worth remembering that Frank doesn't have a badge; everything he does is absolutely extra-curricular and outside the law. Sometimes what he does in the Marvel Universe is tolerated but, more often than not, there's an FBI agent or a police task force after him, trying to take him down for the trail of bodies he's left in his wake.

What's interesting to me is just how many times Hollywood has tried to adapt Frank to live-action productions. There was the 1989 film (which I need to track down today), the 2004 film (which we're going to talk about in a second), another reboot in 2008 (Punisher: War Zone), and then the Marvel Television series that spun out of the NetflixOriginally started as a disc-by-mail service, Netflix has grown to be one of the largest media companies in the world (and one of the most valued internet companies as well). With a constant slate of new internet streaming-based programming that updates all the time, Netflix has redefined what it means to watch TV and films (as well as how to do it). verions of the Marvel Cinematic UniverseWhen it first began in 2008 with a little film called Iron Man no one suspected the empire that would follow. Superhero movies in the past, especially those not featuring either Batman or Superman, were usually terrible. And yet, Iron Man would lead to a long series of successful films, launching the most successful cinema brand in history: the Marvel Cinematic Universe.). Most of these have struggled with making the Punisher into a hero without softening him too much, and all of them have had problems displaying the level of violence the hero is known for without making it hard to stomach.

That does bring us to the 2004 version of the hero, simply titled The Punisher, which starred Thomas Jane in the lead role. This is a film that clearly knew the hero was too hard to stomach in the modern world as they did everything they could to fit him into a classic action film template, softening his edges and giving him a make-shift family to rely on after his actual family (and extended family, and people he barely knew who got in the crossfire) was gunned down. If you ever wanted to know what it would be like for Frank to make friends with a bunch of losers in an apartment building while he ploted bloody violence, this is the movie for you. Spoilers: it's just as bad as that sounds.

In the film Frank Castle (Jane) finishes up one last undercover mission for the FBI before heading into an early retirement to spend more time with his family. Pretending to be a gun-runner he went deep cover with a group of East Europeans for, what we learn, was two years all so they could do a sting op to take out that group and catch a "big fish" in the process. When shooting happens, Bobby Saint, the son of gangster Howard Saint (John Travolta) gets caught in the crossfire and dies. Saint blames Castle (as soon as he finds out who the FBI agent was working undercover on the op) for the death of his son and to appease his wife, Livia (Laura Harring), has Frank's entire family killed at their annual family reuinion before, seemingly, killing Frank too. 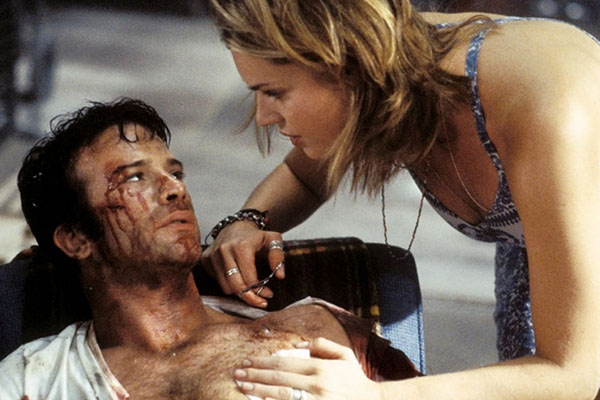 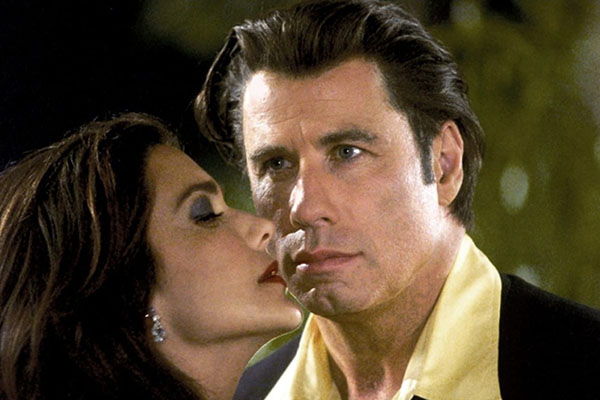 Frank, though, doesn't die; instead he spends the next five months healing and rebuilding himself with just one goal in mind: killing everyone connected to the deaths of his entire family. he sets up shop back in town, living at a seedy, low-rent apartment complex with three nosy neighbors: waitress Joan (Rebecca Romijn), pierced slacker Spacker Dave (Ben Foster), and rotund chef Bumpo (John Pinette). Frank goes about his business, cleaning up Saint's operation one goon at a time, but the tennants at his apartment also try to get him involved in their lives, to create a kind of makeshift family. In the end, though, Frank chooses revenge over healing, electing to go after Saint with everything he has, right up to the blood conclusion.

I will admit I'm not the biggest Punisher fan; I don't avidly read his comics nor do I much get the superhero (vigilante?) or his appeal. In a world of costumed superheroes with special powers, Frank Castle running around blasting street-level thugs with guns feels a bit slimy in a way. It takes the right story to make Frank's tale of revenge interesting and not just blood-soaked monotony. The 2004 version totally misses the mark on all front, but the story is especially bad.

For starters: Frank doesn't need a makeshift family. Yes, having one person around for him to talk to helps a movie or show as it gives him someone to talk to so he isn't just standing around stoically for hours on end (in between bouts of shooting people). Frank isn't an up person, though, and trying to give him a cast of characters that "elevate" him and make him "relateable" doesn't suit the character. People should be horrified by what he does, not supportive of him as a person. This movie feels the need to treat him like a normal Joe when there's frankly something alien about the character. He's broken, barely human, and certainly doesn't understand human interactions anymore. Don't treat him like a normal person.

This is, in part, because trying to make him "normal" normalizes what he does. If he's just your Average Joe than everything he does -- tearing a bloody streak through half the city because that's all he understands -- says, implictly, that what he does is okay. "He's just like you or me, so this is what we'd do, right?" This is how we get cops wandering around with the Punisher logo on their uniforms, or cars, or whatever because they think, "this is what we should do. People wrong us, we should shoot them. Comics and movies told us so." It's what I appreciated about the Netflix The Punisher because that series (and the time the character spent before in Daredevil) made sure to point out that the character was not human anymore, that brain damage and events of his family's death, changed him. When people learned who he was they reacted with revulsion not some need to treat him like your friendly neighbor. 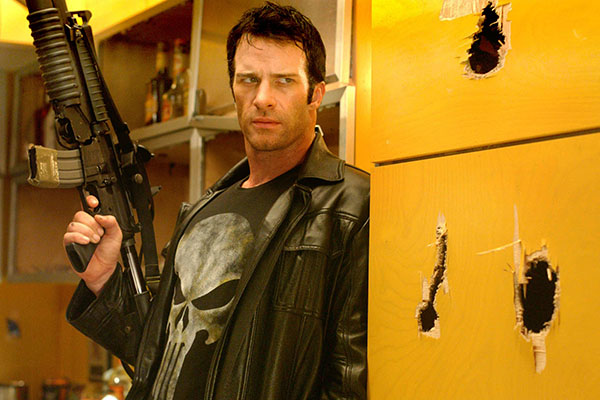 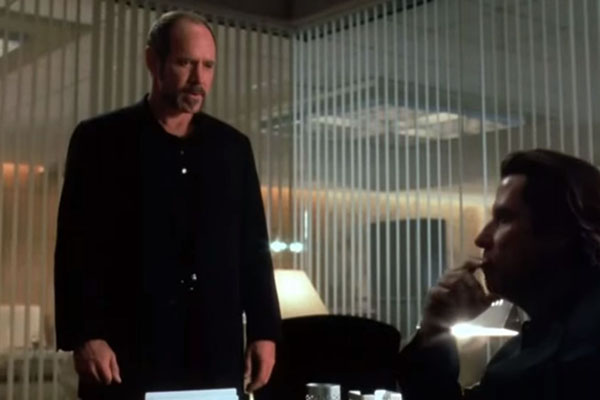 The neighbors, though, are just part of a bigger issue with the film: tonally The Punisher is all over the place. Ignoring the intro scenes which are clearly meant to seem idyllic (so that the rest of the movie feels harsh by comparison), the film never quite finds its footing with the revenge-focused Frank. Much of the time it feels like a PG-13 action film made in the 1980s (this despite it having an R rating), with catchy one-liners, colorful villains, and discrete violence that hides all the blood and gore. That alone feels at odds with the character of Frank Castle, but then the climax of the film gives in to the blood and gore you expect from the hero and suddenly it feels like we're in a completely different film. It's like the director pressed stop on the film, popped a different one into our machines, and started it back up again. It's not cohesive in the least.

I do think with a different script (and a different director) the film might have been able to claw its way towards something approaching a "respectable" Punisher film. Although he was derided at the time for his performance as Frank, Thomas Jane actually wasn't bad in the role. He's credible with the guns, and the knives, and the violence, and he actually can do Frank's whole grieving thing without it just coming off as bland and morose. Thomas Jane was not the problem with this film and, in different, better hands, he could have been quite good, a Punisher for the ages.

The same could also be said of a number of the actors in the film. Rebecca Romijn is generally quite a good actress; given a different role, or at the least not hobbled by a feel-good storyline like in this film, she could have found some solid pathos to play off of Jane's Castle. I could also see Ben Foster being given something more substantial in this alternate film, maybe playing a slimy heavy against Frank. That's a version of the film I would have liked to see, and the bones for it were right here.

The part that really doesn't work, and only helps to sell the tonal issues with the film, is Travolta's Howard Saint. Travolta, frankly, is a terrible actor; this is especially the case once he became famous and, effectively, got high on his own supply. His performance as Saint is the usual Travolta mid-2000s performance, a lazy attempt at scenery-chewing that just feels hacky. It's like he's playing a parody of a villain here instead of actually investing in the role (which is probably the case as I rarely ever seen the actor invest in any role he's given). 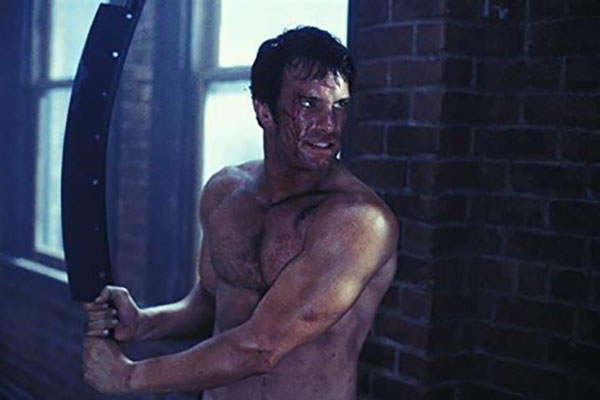 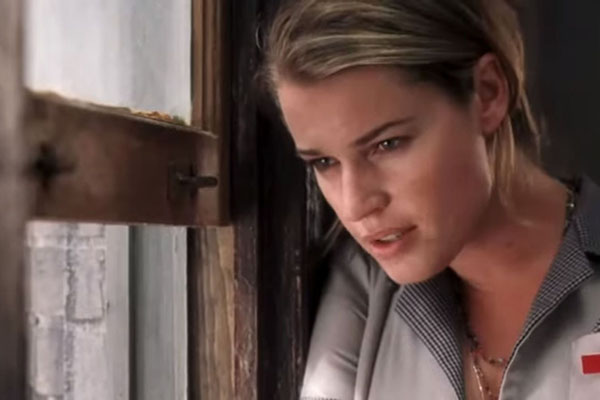 I just struggle with this film. On the one hand it's a bad Punisher films because it feels safe and staid and tired, a studio effort that tries to rehabilitate the hero and make him "pallatable". At the same time, it's also just a bad film at a basic level. It's not competently made, or directed, and the action is, at times, incomprehensible. Characters make dumb choices, events occur simply because they have to and not because there's any logic to it, and it feels like we're forced down a single path because the narrative demands it and not because there's a coehsive story to actually get us anywhere. Plus, it glorifies what the Punisher does when, even the fans will admit, the Punisher isn't exactly a good guy. He might have understandable reasons for his quest of revenge but that doesn't make what he does right. This film fails to understand that.