Teenage Mutant Ninja Turtles II: Back From the Sewers

It's commendable that Konami really wanted to get the Teenage Mutant Ninja TurtlesOriginally dreamed up as a parody of Marvel's Daredevil comics (going so far as to basically reproduce to opening shots of that comic's hero gaining his powers), the Teenage Mutant Ninja Turtles not only launched a sudden boom of anthropomorphic fighting animal comics but have, themselves, starred in multiple comics series, TV shows, and movies. series of games onto the Game Boy. The problem is that the fan base had very specific expectations for what made a good TMNT game -- TMNT II: The Arcade Game -- and if the game wasn't as good as that Arcade title then it just wasn't going to fly. Konami knocked it out of the park with their 1989 Arcade release, and after that every game in the series had to compare to that amazing title. 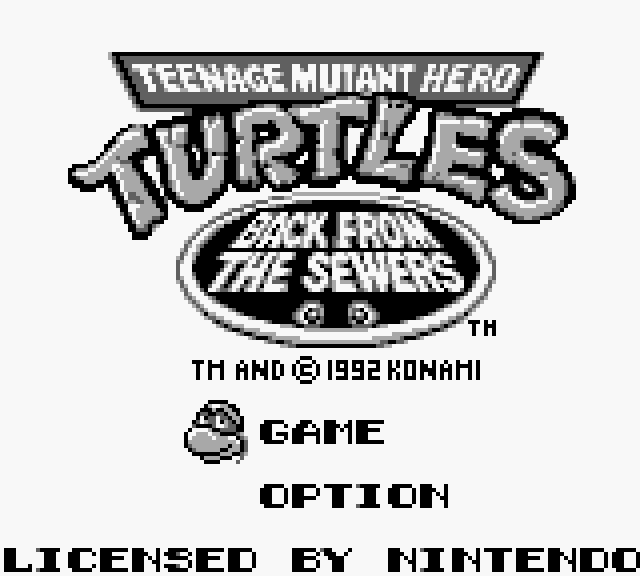 Frankly, trying to put that kind of game play on the Game Boy was impossible. The combination of low-res graphics (lower even than the NES), muddy colors, and basic hardware meant that simply translating the NES game play from TMNT II was impossible. The first Game Boy title, Fall of the Foot Clan tried to sidle past that by at least delivering competent (if not great) game play, but for a sequel Konami had to up the stakes. They had to deliver a bigger package with improvements across the board. Those were the expectations set for Back from the Sewers, but this sequel hardly rose to the occasion.

At the outset, the game does appear to improve upon the foundations of Fall of the Foot Clan, delivering a solid beat-em-up experience with little tweaks that bring Back from the Sewers closer to the style of The Arcade Game. For starters, the Turtles aren't always stuck on a simple 2D plane (unlike in FotFC), with many stages featuring arenas where the turtles can move up and down as well as side-to-side. In these moments, the game does feel like a translation of The Arcade Game.

Graphics wise, too, the game looks like an improvement, with many of the characters closers in resemblance to their cartoon counterparts. Action is smooth and fluid (even if sometimes the character poses are a little wonky). And, yes, all the bosses are nice and big, imposing figures for the heroes to try and defeat. Just looking at screen-caps alone, this game would seem to be a AAA-translation of Konami's best title in the series, packing all that power into the tiny hand-held.

Playing the game, though, you quickly realize that the design of the game doesn't hold up to intense scrutiny. For starters, the levels themselves are pretty awful. Yes, some of the stages feature open arena-style game play, but most of the levels are still single-plane, side-scrolling affairs. These would be tolerable if they were creatively designed -- you can do a lot with a little, as evidenced by basically every Mario game ever -- but the designers for Back to the Sewers simply came up with a "theme" for each level and then didn't put any real work into them. Each stage is essentially the same obstacle or two, looped over and over again for five minutes until the hero reaches an arbitrary end point. That's not level design, it's a loop simulator. 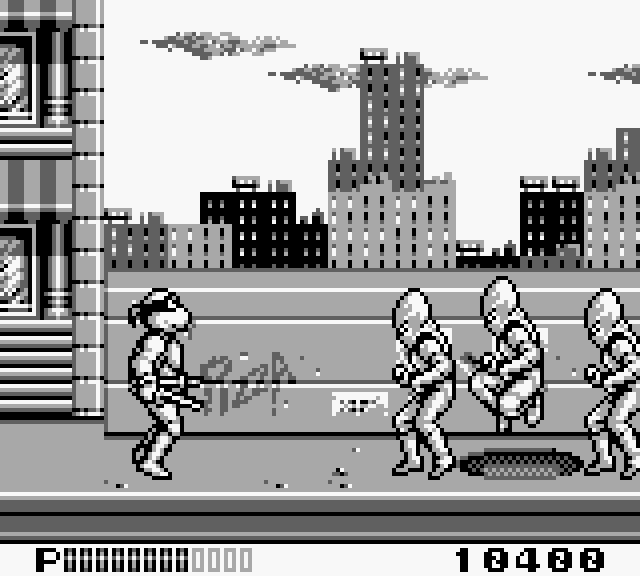 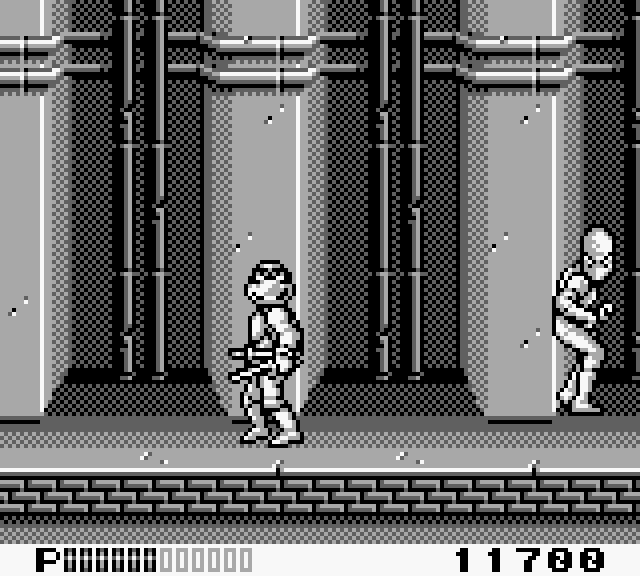 Exacerbating this issue is that, like the previous Game Boy entry, Back from the Sewers has a paltry number of enemies. I hope you like fighting the same basic foot soldier over and over again because that's what you're going to do. It'll show up in every stage, as will weird little bug guys, and very rarely is anything else introduced for the players to fight. Just the same hordes of enemies over and over again through the short selection of stages.

What makes the repetition of enemies so bad is that the game literally spams them at you at a constant clip. It feels like your character will take two steps and then three enemies will burst onto the screen all at once. They aren't hard to kill, with most enemies only requiring a single hit to defeat on the basic difficulty setting (although watch out if you decide to play this on hard mode), but it makes traversing a stage a dull trudge. Move slightly, fight three enemies (who all come in via the same formation), move a couple of steps and do it again. And again. And again. By the third stage the tedium of the experience had already set in.

It's funny because I struggled more with the enemies constantly mobbing me than I ever did with the bosses. Most of the bosses are simple to kill, with very basic patterns and easy plotting. It doesn't take much to kill them, just spam your own attacks and put in more damage to them than they do to you. Long as your stay reactive the bosses are all cake, start to finish. I can see why the multiple difficulty levels were put in simply because without it the bosses wouldn't have any challenge. Giving them more health doesn't really change the dynamics of the fights but it does at least make it harder.

One little twist to the whole experience is that the Turtles don't regain their health at the end of each stage. If you lose all your health as one Turtle you have to swap in a different bro to continue onwards. Beat a stage and you can get one of the Turtles you've lost back, but your health remains low; keep them all alive, though, and you can play a mini-game to collect pizzas and restore health between stages. The first time you play one of these games it's fun, but having to do this every time, spending a minute at a time just to regain your health, draws the whole package out. It adds to the tedium instead of breaking it up. It's just one more needlessly dull task to take care of in a game rife with them. 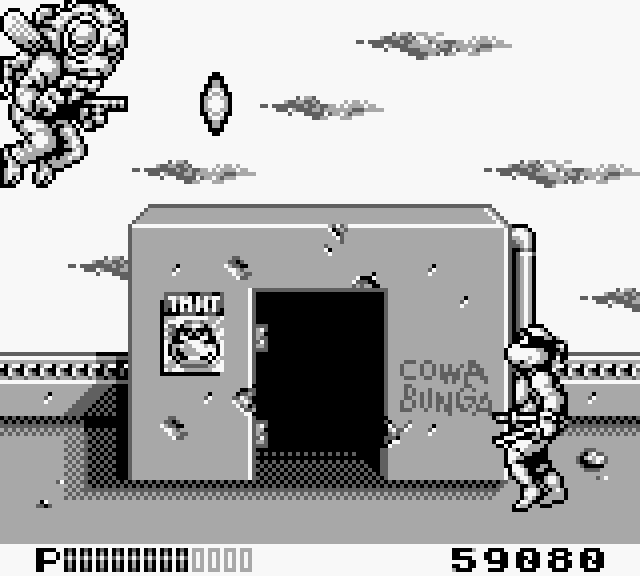 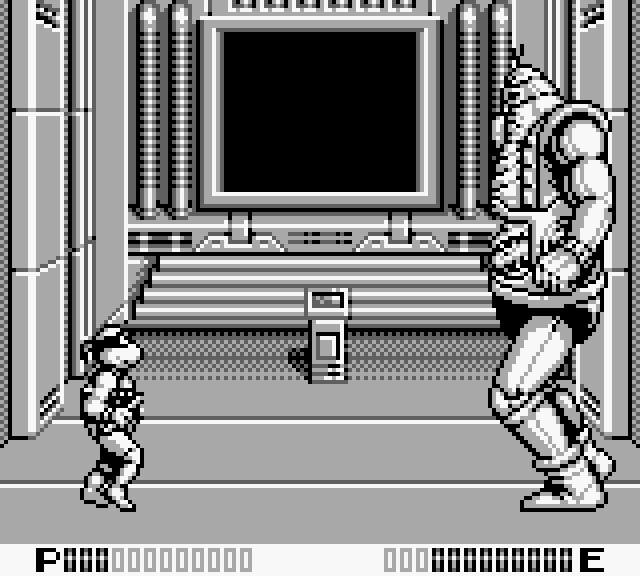 And that really is the problem with the game: everything is dull and monotonous. Yes, it's pretty, and yes it features more expansive stages, but nothing is done with any of it. It still just a mindless bash through constant hordes of enemies leading up to laughably simple bosses and dull mini-games. Once you've played a single stage of the game you've seen all it has to offer, but there's still a bunch more to get through, all of which have essentially the same experience. Back from the Sewers is one step forward for the portable TMNT titles, and then two big steps back.