A Nightmare on Elm Street

As much as it's a cynical cash-grab to resurrect the Nightmare on Elm StreetThe brain-child of director Wes Craven, A Nightmare on Elm Street was his answer to the glut of Slasher films that were populating the multiplex. His movie featured an immortal character, Freedy, with a powerset like none other, reshaping the expectations for Slasher movies to come. series -- and it is because the creator of the series, Wes Craven, said all he needed to say on the matter, finished it out with New Nightmare, and walked away -- I can also understand the basic desire. Freddy is an iconic character and as much as the series had reached a natural, interesting, and fulfilling conclusion, fans certainly weren't going to complain about the possibility of another dip into the well. I mean, okay, in the age of the Internet some fans were always going to complain, but most would just be happy having Freddy back again. 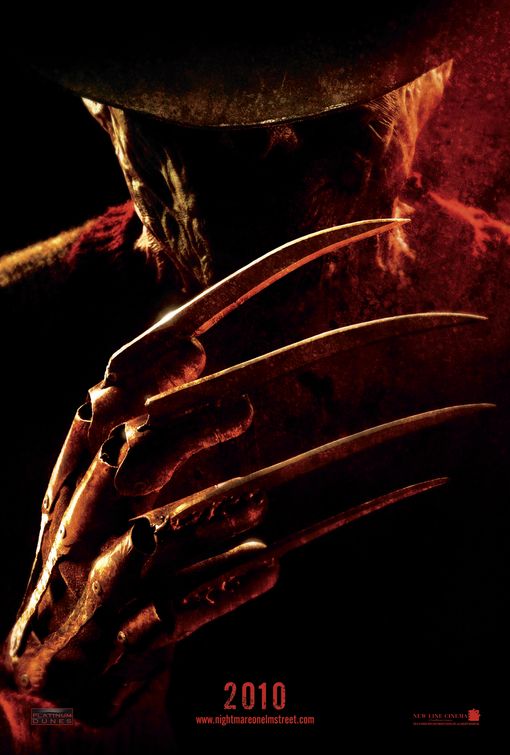 Pulling off that feat, though, wouldn't be so easy. For starters, original Freddy actor Robert Englund had retired from the role -- he'd almost died during the filming of the water stunts in Freddy vs. Jason and hung up the iconic gloves soon after. While Englund said he'd come back for a series of prequels (before Freddy was burned), the studio was loathe to give up their horribly scarred monster. And, really, how interesting could a series of prequels really be. If the first movie didn't end with Freddy dying in a blaze then everyone would complain about his "plot armor". That said, if he did die in the first movie, we're back where we were and, on top of that, the movie would then give us nothing we hadn't already seen. No, the studio wanted to move forward with a dream master, burned and scarred Freddy, and I agree with that decision.

Without their iconic star in makeup, the studio elected to reboot the series, and, again, I don't necessarily see a problem with this. In the right hands a new perspective on the material, a fresh start for the iconic character could have worked. Freddy, honestly, had descended into a parody of himself, a character that had stopped being fun, or funny, and was just a sad riff on corny jokes. New blood could have helped, could have made a reboot film so much better.

Sadly, the 2010 A Nightmare on Elm Street wasn't that movie. It's not a bad film, really, but it's also not a very good one. It's really just amazingly mediocre and totally average, which helps to explain why the movie never got a sequel despite actually making a decent bundle at the Box Office -- $115 Mil take on a $35 Mil budget, pretty good for a slasher flick. There's nothing really bad about the movie, but nothing astoundingly good, either, and in the end the movie came and went with a shrug from the fans. When no one was clamoring for a sequel, the studio eventually quietly dropped any plans to further the reboot, and that was that.

Part of the film's problem is that it isn't telling a story that's all that new. While I understand the need to reboot the character -- no one was going to play him like Robert Englund -- I don't get making a movie that's basically the original film. Slasher films derive much of their terror from the surprises, a fact that the reboot Friday the 13th understood since it gave us a new story. The reboot Nightmare, though, tells us the tale of the first film again with Nancy and her friends being stalked by a mysterious, burned man who kills them in their dreams. If your biggest problem with the original film was that the kids didn't have cellphones, I guess this movie fixes that. Otherwise you've essentially seen this movie before. 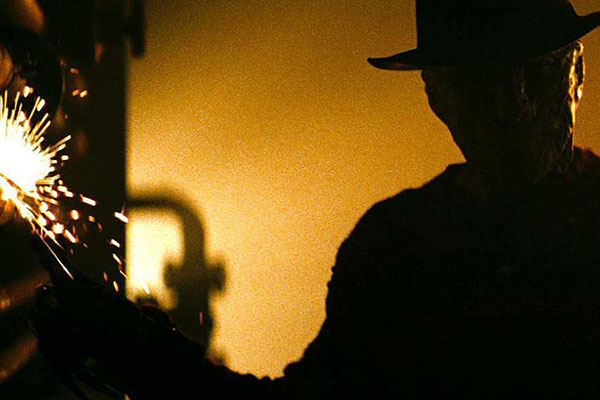 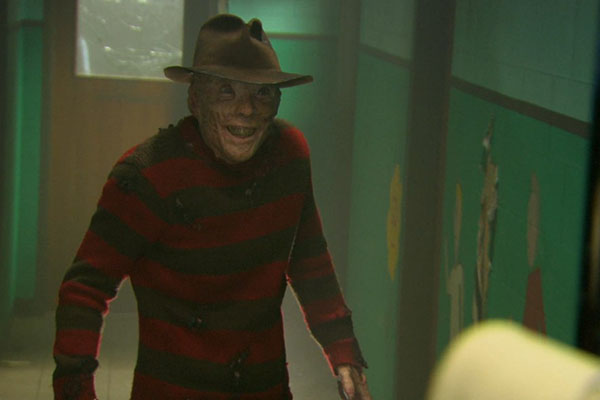 That's not just a comment on the basic story but the fact that, at times, the film slavishly follows the beats, and some scenes, from the original film. Remember when Nancy's best friend is attacked in her sleep, floats around the room, and then is sliced open before dropping onto her bed in a gout of blood? That happens here. What about when the bestie's boyfriend, framed for the crime, is then killed in jail? Yep, that too. How about when Nancy is nearly attacked by Freddy when she falls asleep in the bathtub. I get that it's an iconic image from the original movie, but redoing it here lacks the same impact as the original scene. We've been here before, and while the production values are good and the stars are trying, there's nothing fresh or interesting about this very literal remake.

Credit to the actors as they were at least trying to work with the material. New-Nancy actress Rooney Mara puts in a credible performance as a scream queen even if she lacks a certain girl-next-door innocence to her performance original actress Heather Langenkamp was able to infuse in the role. Thomas Decker, as the bad kid Jesse Braun, and Katie Cassidy (of ArrowverseWhen it was announced that the CW was creating a show based on the Green Arrow, people laughed. The CW? Really? Was it going to be teen-oriented like everything else on the network and be called "Arrow High"? And yet that one show, Arrow has spawned three spin-offs, various related shows and given DC a successful shared universe, the Arrowverse on TV and streaming. fame), as Nancy's bestie Kris, are both good as well, making their lightly written fodder characters into interesting, realized roles (for as little as they get to do with them). And, of course, there's Jackie Earle Haley who is a fantastic actor and, when he's allowed to just act, gives a deep, nuanced performance as Freddy. Unfortunately for much of the film everyone is just rushing through the story, putting in the required scenes to get to a confrontation between Nancy and Freddy but never really giving us the heart and soul to go with it.

Even this could have worked in Freddy were an interesting villain, but this time around he's kind of a blank void. For this movie the producers decided to do a blend of makeup and CGI to convey Freddy's burned exterior and, unfortunately, the CGI effects basic mute all the emotional quality of the performance. Haley's Freddy looks lifeless when he's on the prowl, a dead husk when he should be vibrating with energy. I know it's not the faulty of the actor as, when he's out of the makeup for an extended flashback sequence, his performance is on fire. He's a fantastic actor hobbled by special effects added with too much gusto and his Freddy suffers. The character that should be the center of the movie is nothing but a dull husk.

But then this film really does rely far too much on CGI for its effects. Every bloody splash, ever stab, shank, and gouge is done with CGI. As cheesy as some of the special effects could be in the original series, there was a visceral, lived-in feel to them that's missing from this movie. Beyond the scares beings predictable if you've seen the first movie none of them would connect regardless because the CGI drains the visceral qualities out of it. It's tragic. 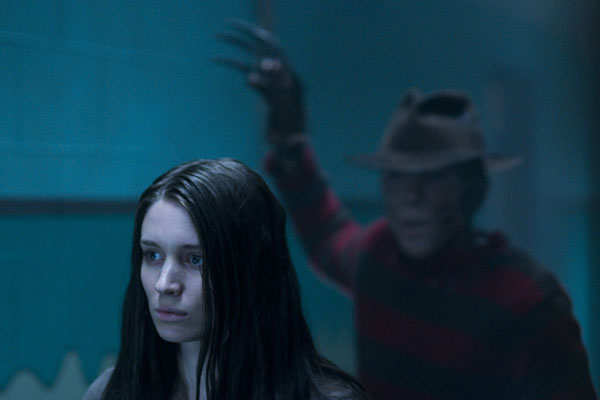 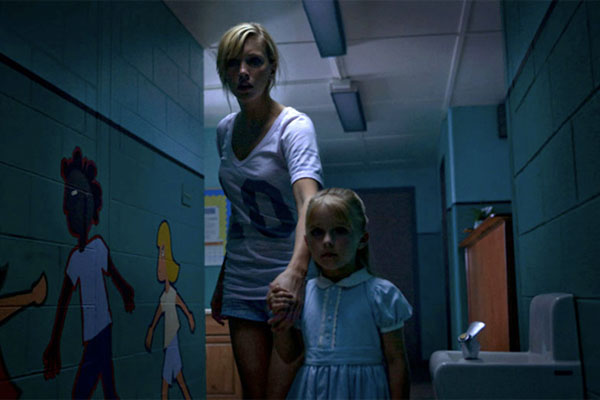 In the end the 2010 A Nightmare on Elm Street is a compromised film. It's just good enough that I couldn't hate it, but it never really rises above mediocrity. If this had been a film released in the middle of a series it would be perfectly fine, tolerable if dumb but at least a decent way to see a character return. As the start of a new series of Nightmare films, though, it fails to deliver enough new material or interesting scenes to justify its own existence. It's for the best that a sequel never happened so we didn't have to see how much worse this series could have gotten.

Just being young. Freddy doesn't need any more reason than that.

The first of the teens is killed in a diner from an apparent suicide, although we see it's really the masterwork of Freddy. The kid falls asleep, a micro-nap, and then Freddy goes in for the kill, quite literally, slicing the kids neck open with a steak knife. That's one sharp knife.

Three, maybe four. The kid in the diner, our heroine's best friend, and then her boyfriend. It's paltry until right up at the end when, with the twist ending (mirroring the original film), Nancy's mother is also killed. That said, if it happened in Nancy's dream (which we're led to believe), it may or may not have happened for real.