A Nightmare on Elm Street 5: The Dream Child

Now we're getting into the real dregs of the series. While I didn't think Nightmare 4: The Dream Master was a great movie, it certainly had its charms. There are worse slasher movies out there, and I'm sure we'll eventually get to covering them all at some point or another. Still, movie four was a decent continuation from A Nightmare on Elm Street and Part 3: Dream Warriors -- it doesn't completely drop the ball and helps to usher the series ever forwards (since, clearly, Freddy will never die). 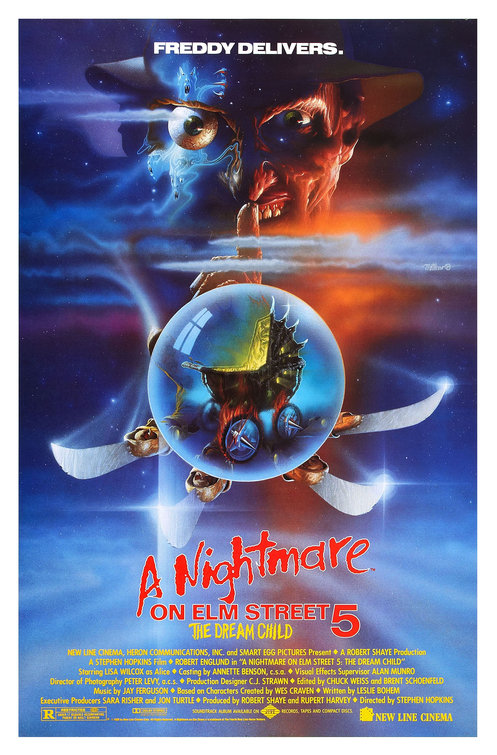 Part five, The Dream Child, it a pretty wretched movie. It's a movie that gets so caught up in trying to explain Freddy that it violates the two core tenants of a slasher movie: one, be scary; two, have a lot of kills. The Dream Child forgets to do either of these things for whole stretches of the movie, forcing us to watch the bad acting and weird story as it just goes on, and on, and on. Ugh.

The Dream Child picks up sometime after the events of the fourth movie (which doesn't entirely make sense when you try to fit the time line together since the first movie takes place in 1984, then the second is five years after that, and the third sometimes after that with enough time for Nancy to get her doctorate, and yet this movie explicitly takes place in 1989), we find Alice graduating from high school. She, with her boyfriend Dan (both of whom were in the previous flick) are planning to go to Paris for the summer before college and life and everything after. But then Alice dreams of Freddy, and suddenly all the nightmares return once more.

It's after Dan's death that Alice finds out she's pregnant (with Dan's child, because from the first frame of this flick where those two were boning). It seems Freddy is using the dreams of her unborn child to stalk Alice and a new bunch of her friends (since all her old friends died in the previous film). Alice has to find a way to stop Freddy and save her child before everyone she loves, including her kid, is lost forever. (Also, as a side note: don't be friends with Alice.)

The Dream Child marks the part of the series where Freddy stops being a side character and becomes one of the main characters. Gone are the days where he was a shadowy figure on the outskirts of dreams; Freddy now has his own arc in the movie and his own full back-story. The Dream Child spends long stretches dolling out bits and pieces of his past. Details that were hinted at in previous movies to give color to the character (coloring an already colorful character with knives for fingers) and given prominence in this fifth film. It's not even a really good story, certainly not one that can really explain how he became the master of dreams. 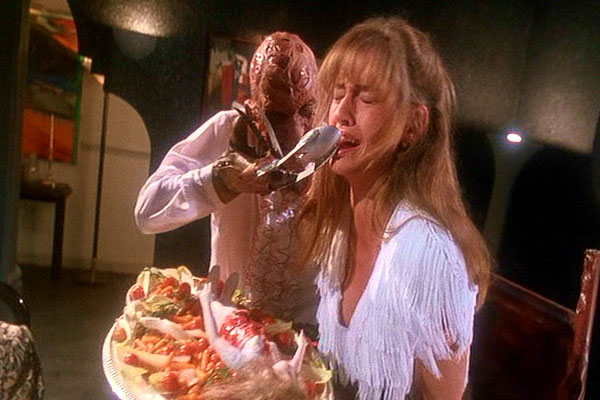 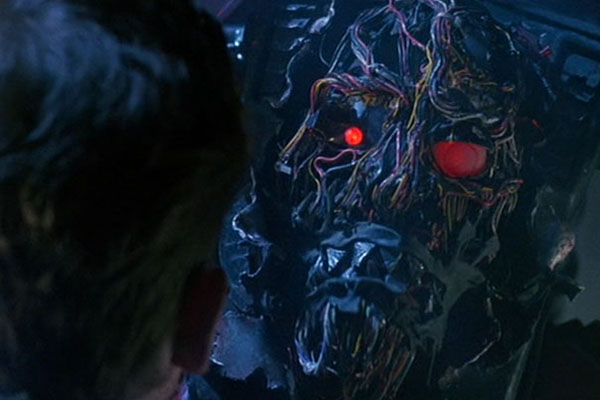 As dictated in the movie, Freddy is the bastard child of a nun and 100 insane rapists. As we see early in the film, he forces his way back into the world by reliving his own birth through Alice's dreams, and the only way to stop him is the find the body of his mother so her soul can be freed and she can fight Freddy. It's a lot of story for the killer, a long and detailed plot that really doesn't amount to much of anything. Sure, his mother kills him this time around, but we all know Freddy always comes back, so why bother putting in all this effort? No matter how much the filmmakers might treat this as the true death of the character, it never will be (even the next film, Freddy's Dead, failed to kill him for long).

Of course, all this back-story does go a long way to explaining why the body count in this film is so low. The film has to spend so much time teaching us about Freddy -- who is is, where he came from, what his weakness is -- that there's barely any time to spend on the kids and the killing there-of. Freddy's whole job is to kill kids, not relive his past. If they wanted to show us who Freddy was, they should have just made a proper prequel film exploring Freddy's life as a human (a movie that, at one point, Freddy star Robert Englund was gung-ho to make). Shoehorning it in here just doesn't work at all.

While the story betrays the film, at least the acting is a marked improvement this time around. The Dream Child boasts a much better batch of actors than The Dream Master, actors that can give something more than half-interested, wooden performances. Unfortunately they're saddled with barely-sketched characters who each have but one personality trait: the pretty one, the sporty one, the comic-book nerdling. Each one is stalked in their dreams by Freddy and their deaths are all based around their one character traits. After the first kill (which was creative and outside the norm for this film) you can basically guess where each kill is coming from and what's going to happen.

The kills aren't even scary, more like grotesque slapstick. It's not even good horror-slapstick (such as in the Evil Dead series). These kills are largely tedious, taking forever to get to their point, and then quickly cutting away just as the action gets good. Clearly the producers really wanted us to care more about Freddy than who he was killing, totally misunderstanding the relationship between killer and killed as well as the audience and the movie. 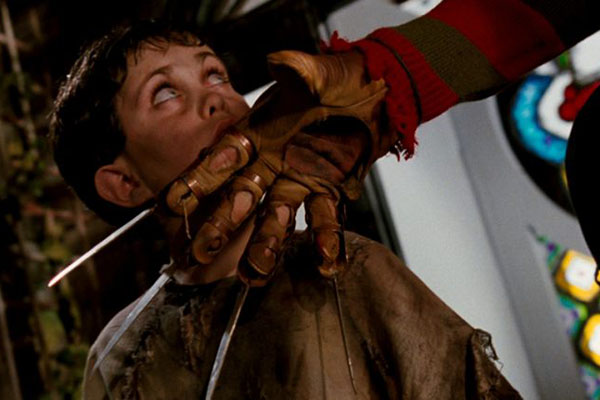 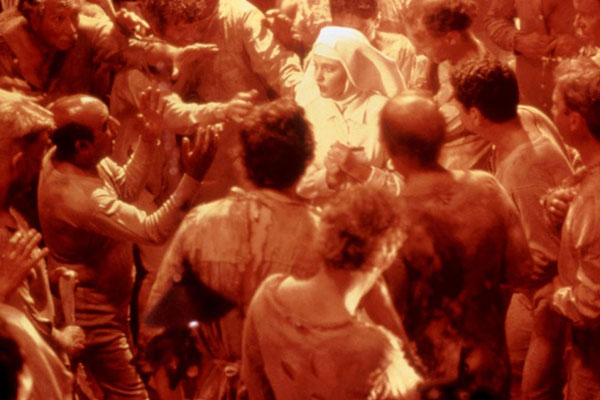 To fully understand just how far this movie goes off the rails, let's look at the plot in further detail. Alice finds out she's pregnant. She then starts seeing this kid, Jacob, running around in her dreams. Jacob, she soon realizes, is her unborn child who, in her dreams, looks like he's 8. He also speaks perfect English, knows slang and idioms, and somehow is a fully conscious, fully realized human being. He's also friends with Freddy and, somehow, starts gaining Freddy's powers. All this from a fetus that isn't even more than a couple of months grown. How does that work?

And what's Freddy's plan, really? Jacob loves his mother, but then hates his mother (because Freddy tells him Alice hates Jacob), but then Jacob immediately loves his mother again. If Freddy was somehow hoping to use the kid to stay alive forever, he has to work harder at it. The whole baby plot line (while different, I'll grant) feels half-baked and poorly thought out. Having Alice be unable to control the dreams because of her fetus (after being a Dream Master in the previous movie) is a really cool concept. The movie, though, spends no time really exploring this new dynamic. Instead, it just rushes through kills and dream sequences all so it can get to another overly-long, drawn out, climactic fight between Alice and Freddy. It didn't really work in Nightmare 4 and it doesn't work here.

The movie is passable at best. Any potential it has from it's weird concept is squandered, leaving you wishing for a better film to watch. There are a few decent films left in this series, but we'll have to slog through one more terrible film to get there...

Sex. Right at the start of the movie. We open to the two main leads getting it on as the opening credits play. Hard to have a bigger sin sooner than that.

Freddy gets weirdly over-the-top this time around, starting the killing at the 30 minutes mark. He tortures Alice's boyfriend, Dan, with a fake car accident that then leads to Dan stealing a motorcycle, only for the motorcycle to merge itself with him. And then he wakes up in his truck right before it smashes, head-on, into a semi. It's really graphic but also super strange.

Three. A disappointing low body count, and while they're all elaborate, none of them are really great.