It's Dangerous to Go Alone

I've never been what I could consider a "fan of shooting games". I get the appeal, certainly, running around with big guns as you mow through hordes of enemies. There is a simple pleasure in that. I have played the likes of Wolfenstein and Doom (instantly dating myself), and a smattering of newer games, but to really play through those games, and be good at them, requires a level of skill in that specific game play I've never shown. I can do a level or two (well, unless it's Far Cry: Blood Dragon, and then not even that), but clearing the game, let alone doing that well, was beyond me. 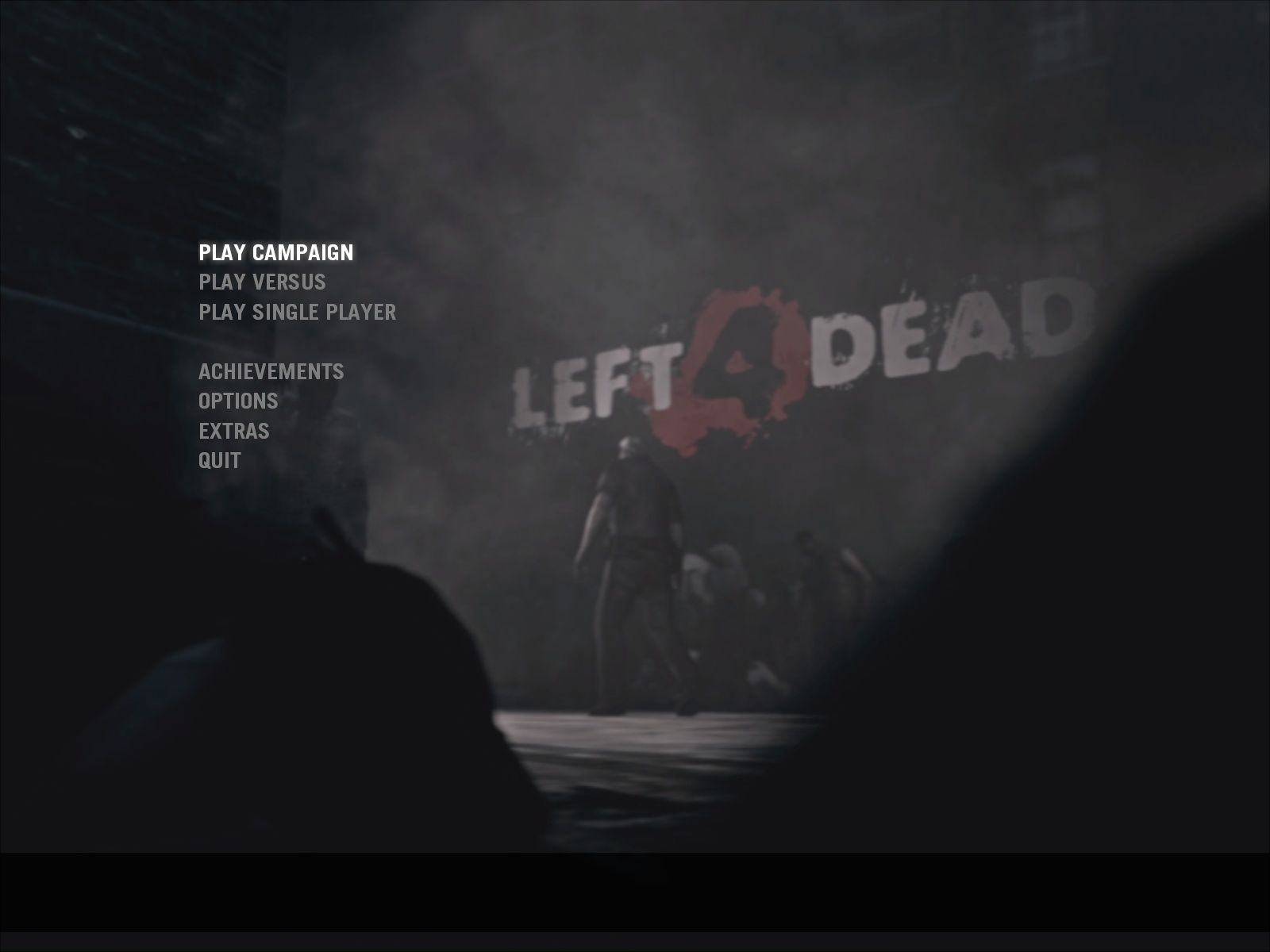 Occasionally there are games in the genre that do hook my fancy. I got in deep on the BorderlandsConceptually, Borderlands is Mad Max but set on an alien planet, with magic. The game play might be action-shooter-RPG fare, with a bit of Diablo thrown in, but the aesthetic is pure, Australian post-apocalyptic exploitation. games for a while, enjoying their mix of shooting and RPG elements with a subtle learning and difficulty curves. But the series I find myself coming back to, again and again, is Left 4 Dead. It has the right mix of everything I want without being too punishing.

Created in 2008, Left 4 Dead is a run-and-gun shooter focusing on four survivors -- Francis, Bill, Zoey, and Louis -- who are stuck in a city, in the middle of a zombie apocalypse, and have to try to escape. This requires them to pick up weapons, find health kits, collect items, and essentially run their way from one end of a stage to the other, shooting anything that gets close while they try to make it to the exit. Pretty standard shooter stuff.

The trick with Left 4 Dead is in how it mixes all its elements together. The zombies themselves aren't all that strong, quick to mow down with a few shots from any of your weapons , or you can push them away with a melee strike, but that won't kill them. The goal isn't really to kill everything but get to the safe house at the other end of the path. That puts the emphasis not on the action (although there is plenty) but on surviving. Your resources are precious, your time fleeting, and you have to move if you want to survive.

You better run because the hordes doesn't wait. If you take too long, linger in any area, waste any time, a horde of zombies will get called in, running from multiple directions to swarm the heroes. Sure, you can now them all down but that will bleed your ammo as well as your health (your health doesn't regenerate in this game so even a basic hit from a zombie will linger for a while), so staying on the move and avoiding the horde is, frankly, the better plan. 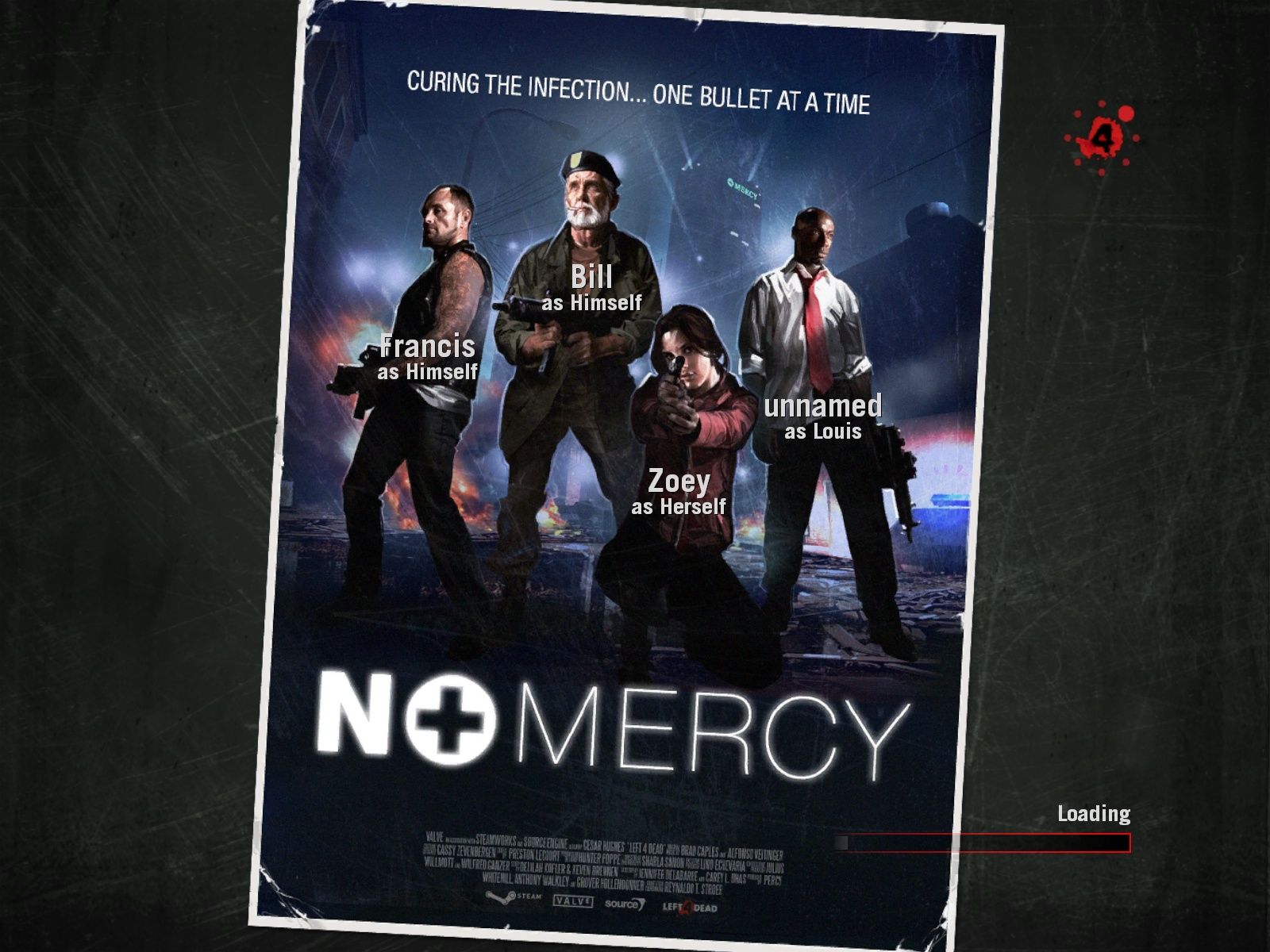 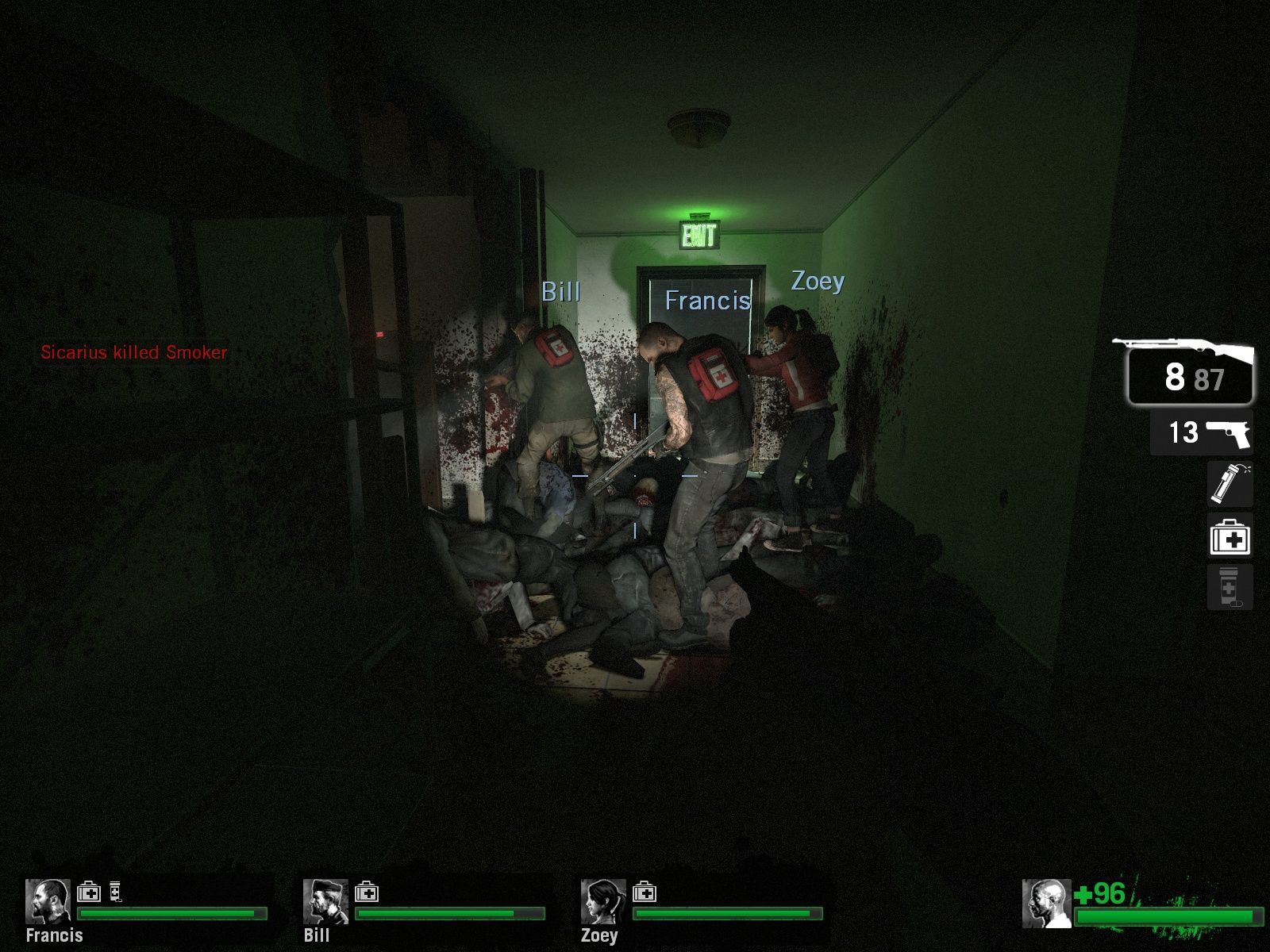 Not that it's going to stop you from seeing some nasty things along the way. Each level is dotted with at least one section where you'll have to activate a gate, or start an elevator, or something, and this will make a loud enough noise to draw the horde. You then have to wait, and survive, while whatever mechanism slowly opens, fighting off the pack as best you can. Then it's back to running again while you try to outpace any lingering zombies and make it to the exit.

Oh, and then there's the special infected. Along with the regular undead, Left 4 Dead features a smattering of specialized infected, like little sub-bosses and bosses, that will show up as you run through each stage. The infected range from the Boomer, who sprays zombie-attracting bile; the Hunter, who leaps on survivors and pins them down, attacking them; the Smoker, who has a long tongue they shoot out to grab survivors and drag them away; the massive and powerful Tank, who will charge through areas and takes a lot of damage to kill; and then the crying, scary Witch, who will attack whichever survivor wakes them. This variety, and the ways to deal with all of these undead, leads to a lot of strategizing and coordinating among the survivors.

The special infected not only change up strategies on the fly, but they also force the players to stick together. Many of these monsters can pin a survivor, leaving them unable to get back up (and bleeding out) until another player comes along to help them. If one player goes off on their own, and then gets taken out by an infected, that's game over for them until the next stage. Thus, traveling in pairs, or all four together, is a better strategy than just trying to play through the game on your own. Sure, speed-runners can do it solo, but everyone else needs to work as a team to survive.

And don't expect to just memorize where the zombies are and know that you're going to see a Boomer here, a Tank there. The game has an adjusting AI, called the AI Director, that will vary the setups of the zombies. It will stagger things around, throw more stuff at you if you're doing really well, and make you work to keep up with the hordes. No two play throughs of a stage will be the same, leading to a lot of fun and variety as you try to get through the game over and over again. 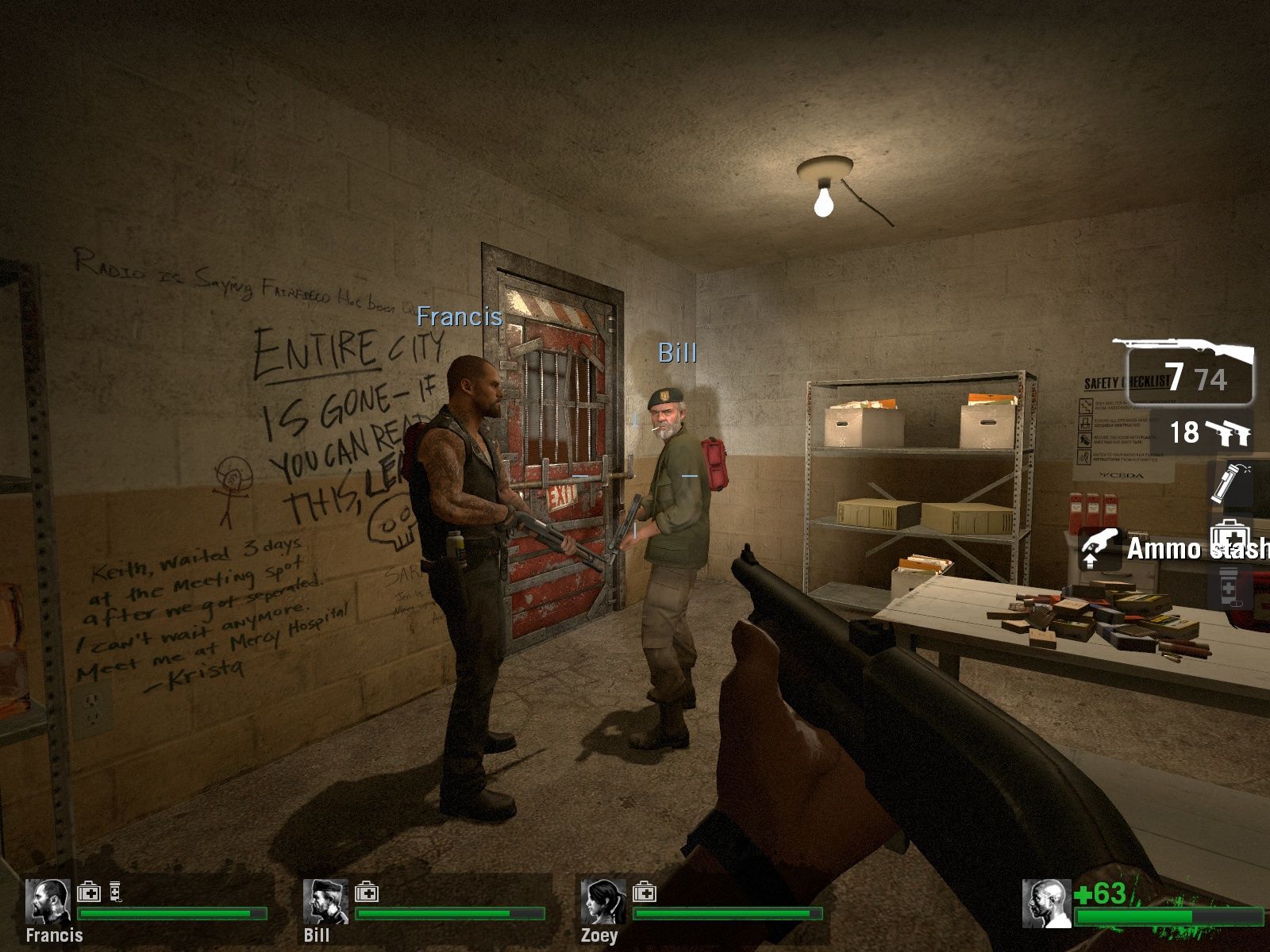 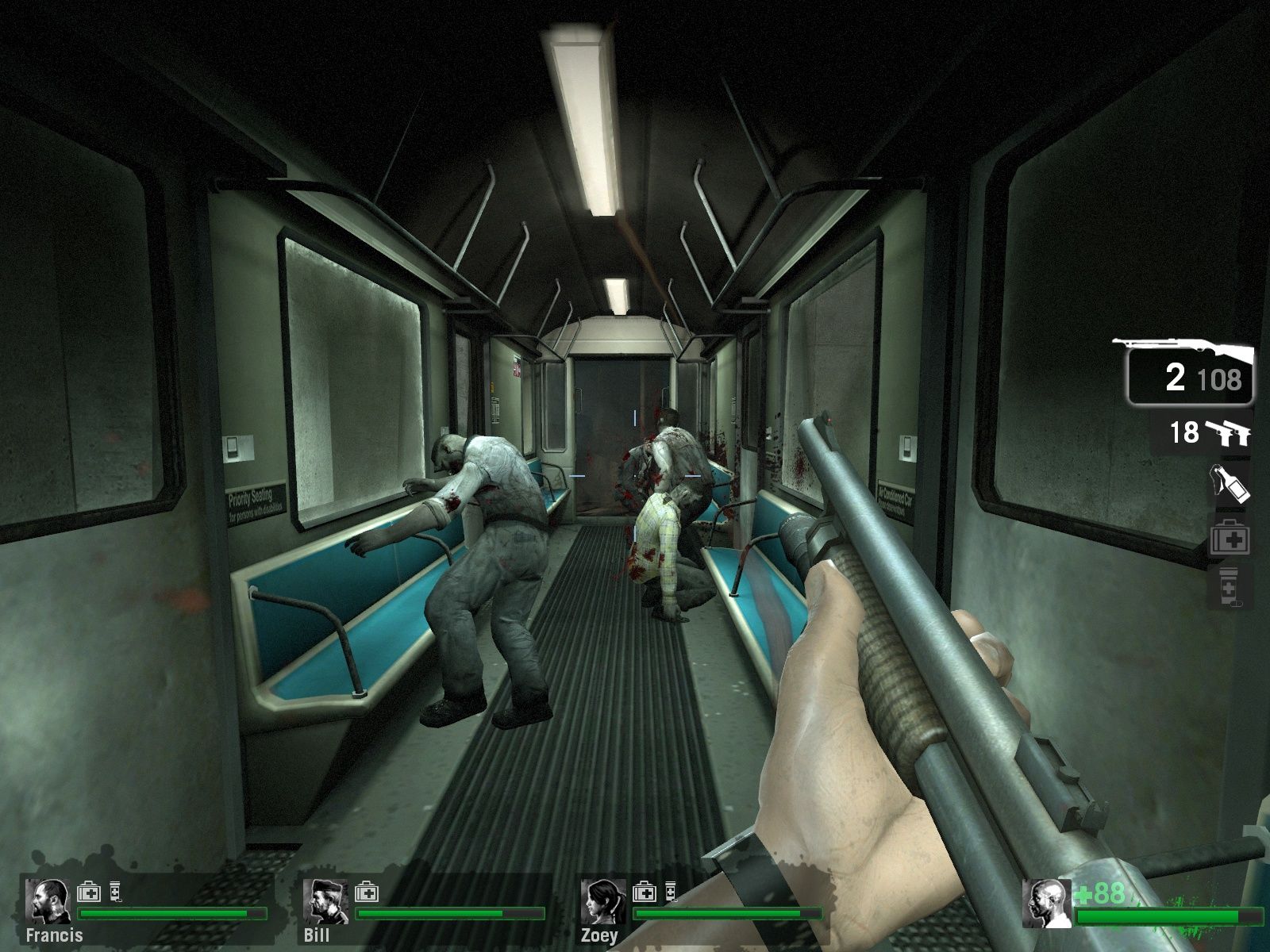 The original game had four main campaigns -- "No Mercy", set in a city as the survivors have to track their way through downtown to a hospital, "Death Toll", set along a small town, "Dead Air", set back in a city with the survivors having to track through to an airport, and then "Blood Harvest", SE in and around a farmstead -- and each of these campaigns was broken into four main acts which a big finale. These were that expanded on with the shorter "Crash Course", set in the outskirts of "No Mercy", and "The Sacrifice", which wrapped up the story of the game and lead into the plot line of Left 4 Dead 2. Between all these campaigns there was a lot to do and so much to kill.

And that doesn't even get into the co-op features, like team vs. team where one side plays as the survivors, the other as the infected, and then they switch. This game was made for co-op, really, whether it was playing against each other or just four people playing Online, trying to survive. That, I think, was really the best part of the experience: getting some friends together to rampage while you had a freewheeling, zombie killing good time.

With all that said, if you want to play Left 4 Dead now, it's easier (and arguably a better purchase) to pick up Left 4 Dead 2 with all its expanded content. All of Left 4 Dead was ported into the sequel eventually as DLC, and you can play through all of these campaigns, with the original characters, and all the additional features (and zombies) from the sequel. The balance is a little different, sure, but you get all the content you crave in one big package.

However you play it, though, Left 4 Dead is a lot of fun. And, despite its age (going on 15 years as of the time of this writing), it still has a loyal and dedicated fan base playing away on Steam. It's worth grabbing the game (which is cheap, bear in mind) and running around the zones with a bunch of friends. That experience still stands up after all this time.