Although the era of the Nintendo Entertainment System is beloved by many, it is fair to say that the system had its fair share of bad games. Many of the worst offenders were adaptations of films and other mdia, trying to get a little of that sweet cross-promotion, and hard earned cash from kids because of it. You could pick out any number of games based on films that likely shouldn't have received "kid friendly" adaptations (Rambo, Die Hard, Friday the 13th) and yet did. Anything to make a buck. 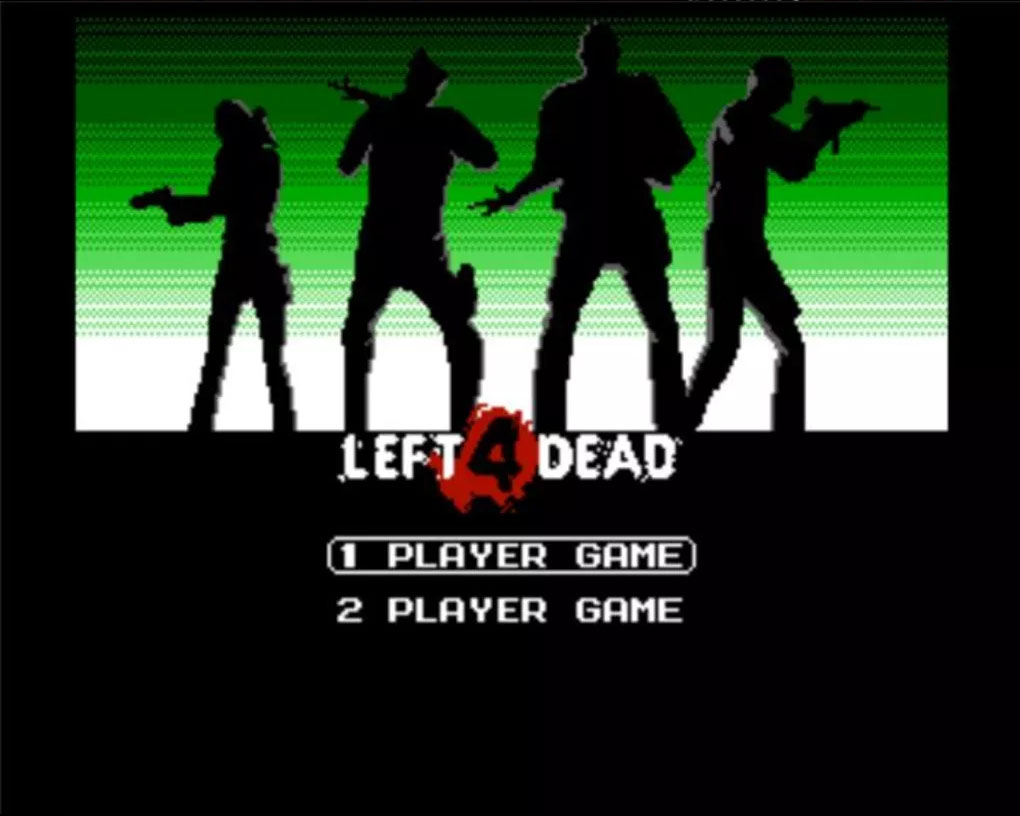 In the spirit of those old, questionable games, Pixel Force created their own adaptation of Left 4 Dead. A "demake" of the 3D zombie shooter, the game aspired to tap into that classic NES vibe with a game that, really, shouldn't have been marketed to kids (Left 4 Dead wasn't, but this is the vibe these creators were going for). It's bright and colorful, bouncy and poppy, and it does, in fact, do a pretty credible job of adapting Left 4 Dead down to the NES (at least styistically). The only question is if te demake actually is a good game in its own right.

Taing the bones of the original Left 4 Dead, the Pixel Force version brings in all the familiar trappings you'd expect. The game presents you with your four characters to select, and then sets you down to go through the four familiar missions -- "No Mercy", "Death Toll", "Dead Air", and "Blood Harvest" -- all before sending you out to kill zombies and survive. And then you proceed to walk through the acts, slaughtering zombies by the hundreds, until you reach the end.

Along with the standard zombies (who in this version all look the same), the special infected also make their own appearances. First boomers, spitting projectiles at the heroes, followed by hunters who leap at the heroes and try to pin them, smokers lashing out with their grasping tongues, witches who run screaming at the heroes when awoken, and then, finally, the massive tanks that mark the end of each act. You'll grab your weapons, defeat the bad guys, and try to survive because, if you die, it's game over and back to start once more.

As far as adapting the base gameplay of the original title, Pixel Force: Left 4 Dead does a pretty decent job. Considering the limitations of the NES (which, while this game is freeware for the PC, it still emulates the NES style), the game plays pretty smoothly. Your characters move around on flat stages with free, four-way control, and you'll shoot at your foes cleanly as the action builds. You never feel like you're fighting the game, or that your controls were dropped, as everything is tight and well constructed. 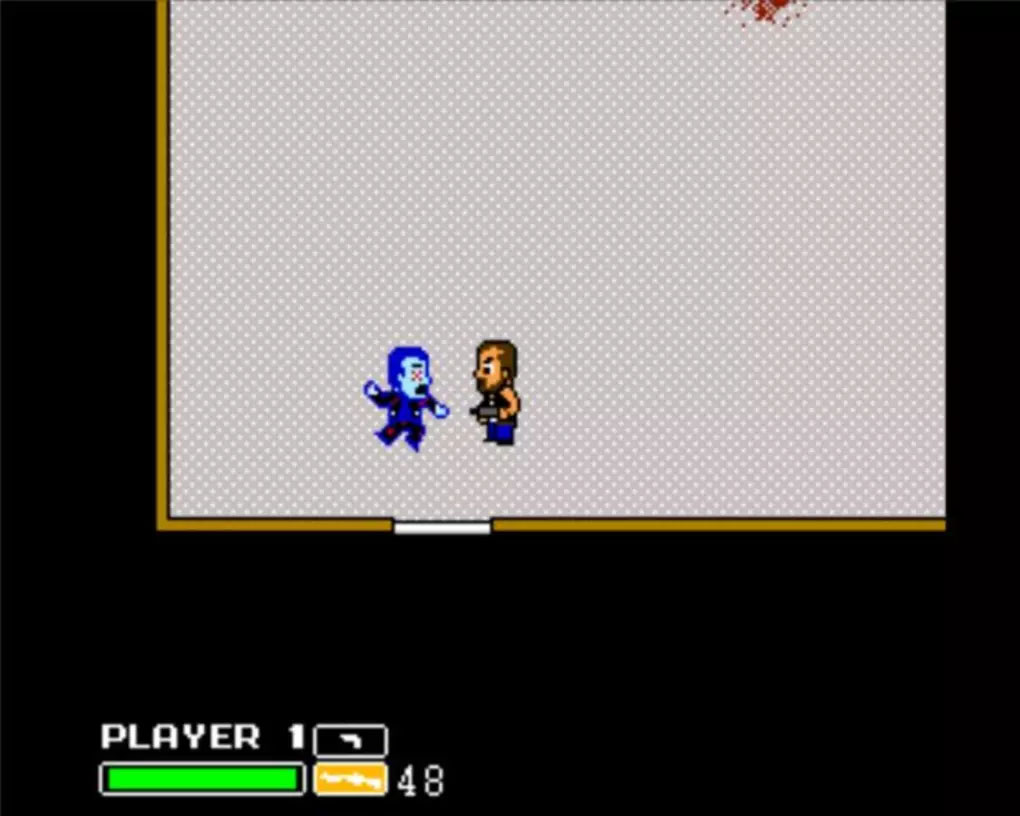 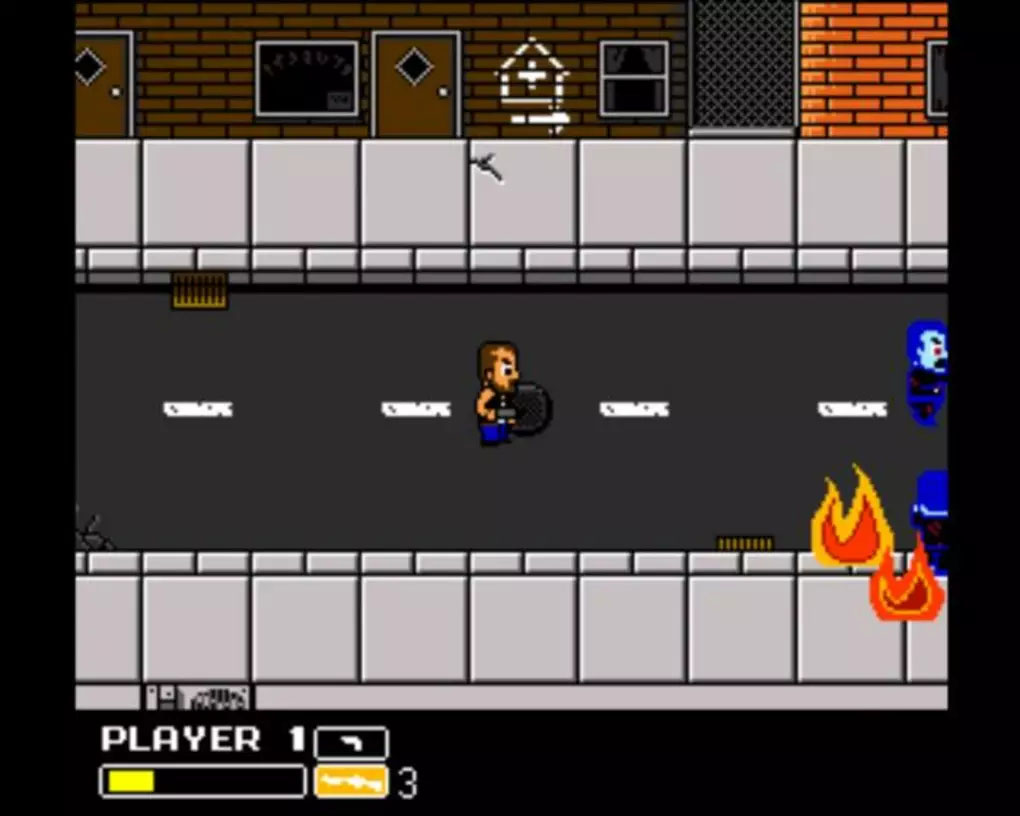 Of course, the game does benefit some from the fact that it's not actually running on an NES but a PC, just dressed up with NES trappings. Thus you won't encounter any sprite flickering or graphical issues aas the game plays. Nor will you see any kind of slow down as larger and larger mobs of enemies come for you. That's good because you do want to be able to target all of them cleanly without issues, but at a certain point you will be reminding yourself you aren't really playing on an NES and, had this been on original hardware, it never would have played like this.

As far as that verisimiliude is concerned, the graphics and sound also match that of the NES era. The music is delightfully plinky, matching the chiptune style of old. I'm not deep into the NES music scene so I can't say for certain just how accurate the game is in emulating the style, but it does sound authentic. I could grouse a little about how some songs are used a lot, and how the game could really use a longer soundtrack (especially considering some of the missions can take upwards of an hour so you'll hear the same tracks over and over) but it works in the context of the NES style and how those games used to operate.

Less authentic are the graphics. Oh, it looks like they matched the color palette just fine, with the bright blue zombies contrasting nicely against the backgrounds, looking very different from the heroes. The issue is that I could pick out, in many instances places where there were more colors on the sprites than the NES would have allowed. It was little things, for sure, like Bill's white hair, green hat, and peaach skin, all with a black outline. That's one too many colors and while a player now might not notice it, it's there when you realize what's wrong. This pulled me out a little as it showed the team wanted the illusion of NES style without always truly matching it.

And if they were willing to compromise a little I would have preferred to have a few other conveniences and other improvements made for the sake of punching up gameplay. For starters, none of the grenades made it into the demake. You can't throw pipe bombs at all, and the zombies don't even care about fire at all (unlike in the original game) so molitovs were right now. There's also no pushing zombies back or any kind of melee (although melee weapons were added into Left 4 Dead 2). Yes, I get that the NES only had two face buttons, plus start and select, but even with pausing that allows us to have three action buttons available. More creative weapon options would have given breadth to the game. 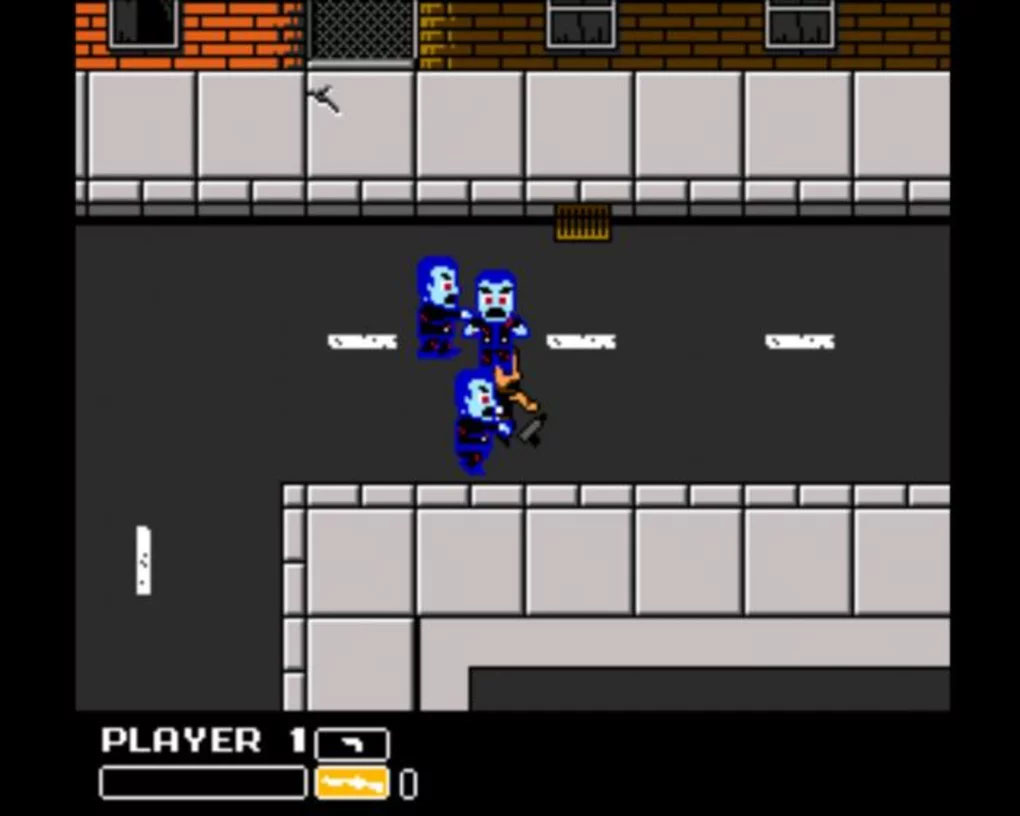 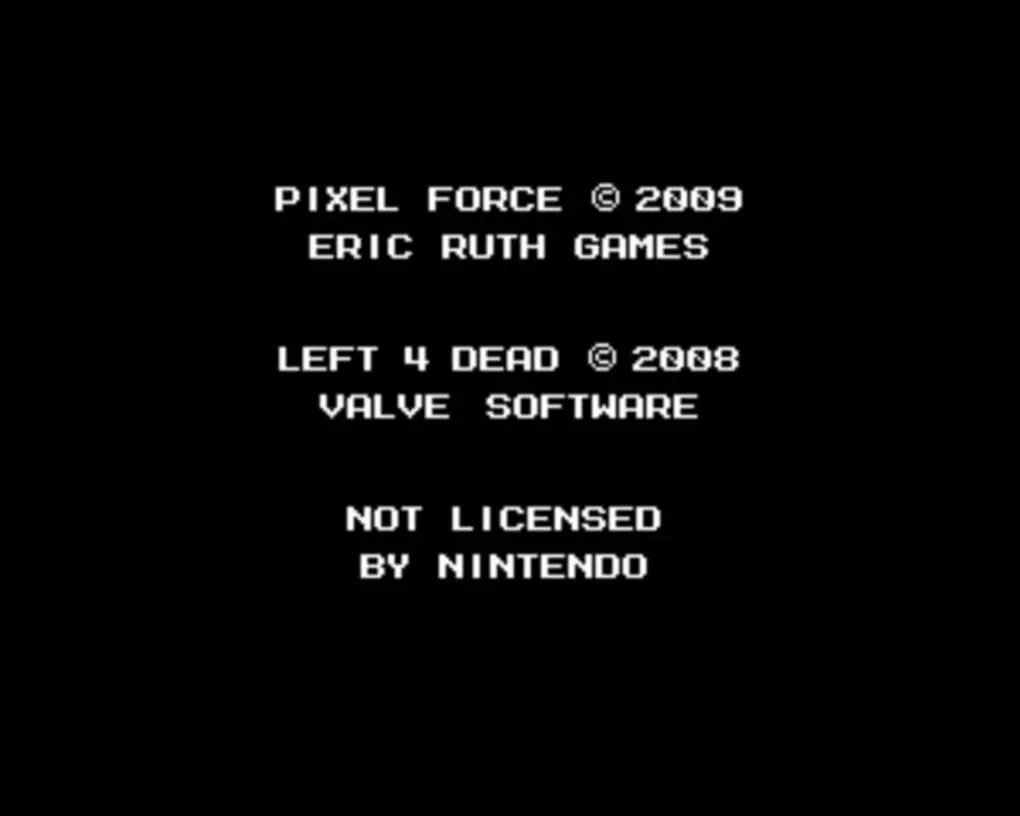 Heck, there isn't even anything to shoot aside from zombies. In the original games you could throw gas and propane tanks and then shoot them for big explosions. Those don't exist here, either. And there isn't any worry about shooting cars that will cause a horde to appear, or any other kind of events that change up the game play because none of that is included. The game is very basic with you just walking around and shooting zombies.

Now it might seem weird that I'm bitching about a zombie shooting game just having me shoot zombies, but the original game (and it's sequel) understood how to break up the gameplay just enough to keep things lively and interesting. This demake doesn't include any of that. There are no hordes, no big finales, nor anything else special. The best the game could muster were overly long boss fights against hulking tanks, but that's just like the normal zombie encouters except more drawn out. It's a lot of the same, over and over, for about four hours total gameplay.

What I would have liked to see were some mini-games to change things up. If we couldn't have hordes that were alerted to loud noises, like lowering a bridge to get across a gap, maybe we could have had a block building game to create the bridge. Or some tetris style puzzle to unlock a door to get to the next stage. Little mini-games like these would have felt perfectly inline with the kind of crap that was put into NES games to give variety, and it would have helped here. Variety would be really nice in this demake.

There is a lot that this game gets right, not the least of which is that (because this is an unofficial demake that, while well regarded by the creators, couldn't be made for commercial purposes) the game is free. It's had to argue with a free game. And in small doses the game's pleasures do come through. It's an amusing lark to see little "8-bit" versions of the heroes fighting chunky zombies in familar zones. The game adapts the basics of the first Left 4 Dead pretty well. Where it falls down is in innovating a truly interesting experience to play. Pixel Force: Left 4 Dead is an amusing diversion but, depite it's four hours of potential gameplay, it doesn't have the longevity of ideas to really carry through to the end of the game.