Shang-Chi and the Legend of the Ten Rings

When Marvel launched the Marvel Cinematic UniverseWhen it first began in 2008 with a little film called Iron Man no one suspected the empire that would follow. Superhero movies in the past, especially those not featuring either Batman or Superman, were usually terrible. And yet, Iron Man would lead to a long series of successful films, launching the most successful cinema brand in history: the Marvel Cinematic Universe. they did it with a cast of their B- and C-list superheroes largely because they didn't have access to any of their top-tier heroes (the SpidermanSure, DC Comics has Batman, Superman, and Wonder Woman, but among the most popular superheroes stands a guy from Marvel Comics, a younger hero dressed in red and blue who shoots webs and sticks to walls. Introduced in the 1960s, Spider-Man has been a constant presence in comics and more, featured in movies regularly since his big screen debut in 2002. and X-MenLaunched in 1963 and written by Stan Lee and Jack Kirby, the X-Men featured heroes distinctly different from those featured in the pages of DC Comics. Mutants who didn't ask for their powers (and very often didn't want them), these heroes, who constantly fought against humans who didn't want "muties" around, served as metaphors for oppression and racism. Their powerful stories would form this group into one of the most recognizable superhero teams in comics (and a successful series of movies as well). crew, among many others, having their license rights sold to other companies to keep Marvel afloat in the 1990s). That's why the franchise started with a superhero that, at the time, no one really knew or cared about: Iron Man. With perfect casting, and a solid script, that film became one of the greatest superhero adventures ever. 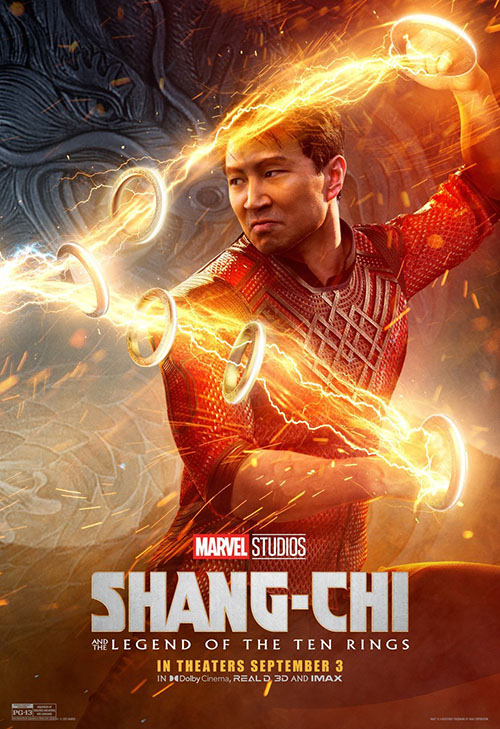 Sometimes Marvel is able to capture that magic again -- Captain America: The First Avenger, Guardians of the Galaxy, and then Ant-Man to a lesser extent), but the great power of the MCU is its momentum, the fact that all the films are connected and that whatever happened in a movie was caused by previous events and will then lead to other events. You watch each chapter not for the individual stories but to see the whole narrative; the Marvel train slows down for no one.

Solo adventures, although they have continued to regularly come out, don't often feel very solo. Spider-man: Homecoming needed Iron ManBillionare Tony Stark has a secret: while he travels the world by day as a playboy philanthropist and head of Stark Industries, he combats the evils of the world as the armored Iron Man. in it and built off of Captain America: Civil War. That film also launched Black Panther. Even one of the best solo adventures, Thor: Ragnarok, was the third adventure for that hero. Marvel doesn't really make true stand-alone stories at this point, but Shang-Chi and the Legend of the Ten Rings is about as close at the studio can get at this point and it's much better for it.

The greatest strength of Shang-Chi is that it feels largely removed from the greater Marvel world around it. Yes, the villain references another villain from Iron Man 3, and yes a character does cameo from Doctor Strange, but this film is about as close as we're ever going to get to a true solo adventure. It works because, without worrying about how this film has to connect into the greater narrative of the MCU, Shang-Chi is able to focus on its hero and tell a solid, honest, fun story about this new (to the universe) character. And there's a big emphasis on that fun.

The film introduces us to "Shaun" (aka Xu Shang-Chi, played by Simu Liu), a dude just going about his life as a valet at an expensive hotel. He spends most of his days hanging out with his best friend, Katy (Awkwafina), as they have fun and slack off from life. That all changes, though, when a group of goons come for "Shaun". Katy just wants to give the goons whatever they want (specifically the pendant Shaun has around his neck that he got from his mother), but Shaun then fights them all off, impressively, and he's forced to reveal he's not just a valet doofus but, also the son of a powerful, thousand-year-old terrorist. 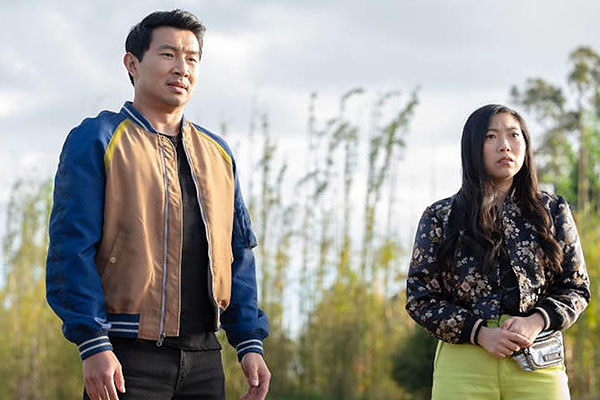 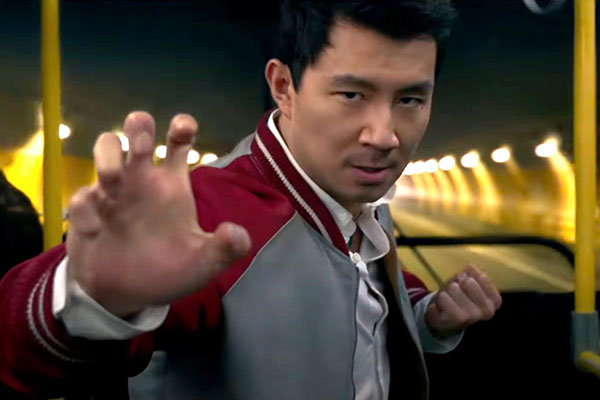 Centuries before, Shang's father, Xu Wenwu (Tony Leung), discovered a powerful alien artifact: ten magical rings that gave him limitless power (and immortality). With these rings, Wenwu went on to become one of the most powerful conquerors in the history of the world. But then, much later, he met a woman, Ying Li (Fala Chen), while attempting to invade her magical village. Instead of continuing his attack he, instead, courted Li and the two were married, having Shang and his sister, Xialing (played as an adult by Meng'er Zhang). Sadly their mother died while they were young and this sent Wenwu back into his life of evil. Now, years later, Wenwu wants to invade Li's village once more, now because he thinks her soul is trapped there and needs to be freed. But a dark force is controlling their father and Shang (along with help from Katy) will be forced to reunite with Xialing to battle their father and the true evil working behind the scenes.

There's a lot going on in the story and the movie builds and builds until it becomes another big, Marvel CGI event. But before we get to that point we spend time with Shang and Katy and it's there, with this duo of characters, that the film finds it true spark. There's a genuine, friendly chemistry between Simu Liu and Awkwafina that sells the fact they've been best friends for going on a decade. The fun the two have with each other, the jokes they crack and the asides they share, give the film heart and depths. Most Marvel films focus on their lead character with the cast of side characters rotating around them, but for most of this film it's Shang and Katy sharing duties (even though only one of them is a fighter destined to become a superhero).

Honestly, the writing for this film really is on point. The whole first act is a romp as the comedy flies and the action builds in. Even as the film transitions from amusing and comedic adventure into a something more akin to a family drama it still keeps the focus squarely on the characters. It uses one comedic character, Trevor (a returning Ben Kingsley), to keep that bit of Marvel humor going, while it transitions into drama and action to carry us into the last act. It does this really well, continuing to maintain its energy so the film never drags or loses steam, keeping the audience engaged and interested.

The film does become a more standard Marvel superhero film in its last act, a showdown of good and evil against a pretty generic CGI bad guy. To the film's credit (and, really, the credit of the CGI director), at least the CGI bullshit in this film doesn't feel like the standard Marvel CGI bullshit. The artists working in a proper Asian flair to the CGI, making it feel like monsters and beasts that came out of an Eastern work of art. It makes the images and visuals interesting and while it's clear that a lot of this stuff was filmed against a green screen and doesn't really exist it looks cool and works within the context of the film. That keeps it from at least feeling like standard Marvel CGI bullshit. 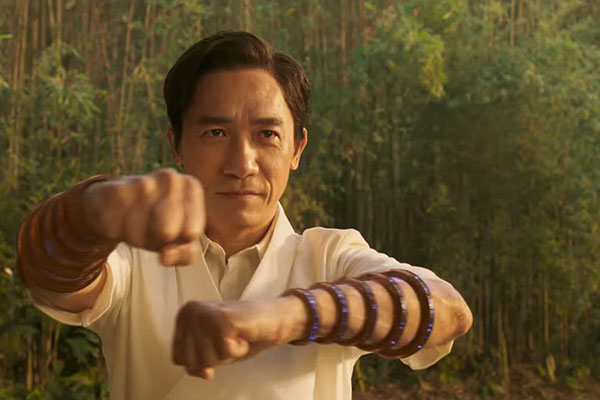 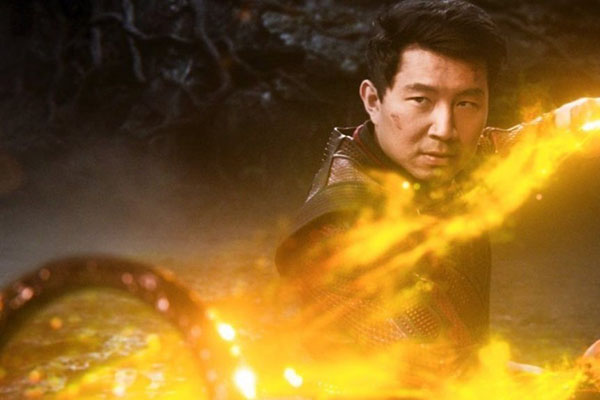 The focus, though, remains on Shang-Chi. This film isn't exactly his origin story (although we get bits and pieces of that in flashbacks) but more a story of him reclaiming his birthright. The movie does a good job of making it clear that he was trained for a long time to be a warrior and has kept his skills in check even if he never used them. Then it also shows us how he learned Tai Chi and other martial arts from his mother (who had been the protector of her magical town). Thus, when in the last act he has to bridge the fighting and powers of his father and his mother it doesn't feel like the film has just spontaneously leveled the character up. He spent decades earning this, finding his own path through life, and it works.

Really, the film should be congratulated for finding a way to introduce a new character into this world that's already jam packed full of them while also finding a way to make him seem fresh and interesting. Once the movie was done I found myself wanting to know what happened next to Shang and Katy, where their adventures would take them in the future. I haven't felt that way about a Marvel hero in quite some time. Sure, Shang is going to be an Avenger at some point and will probably end up appearing in the next big crossover so he can say a few lines and then punch something, but right here, in this moment, there's promise that the character is in good hands, will have adventures that are worth watching. I like the Marvel films but they do all kind of boil down to the same stuff eventually, whereas Shang-Chi and the Legend of the Ten Rings proves there's still a solid spark in the Marvel formula.

Here's hoping the studio can continue with this kind of energy for the films continuing to come out in Phase IV (although, from the sound of it, Eternals really failed on that count).