During the span of specials that were produced at the end of David Tennant's run, a single animated special was produced. Released in smaller parts over the course of a few days on the Doctor Who website (among other outlets), these mini-episodes comprised a single larger adventure that kinda-sorta neatly tucks into the series of episodes that make up his last year as the Doctor. Since it didn't air live on the BBC (although it was eventually given a broadcast after the fact) it is, really, of questionable continuity. It's also of questionable quality, but that's most because it's just so poorly animated. 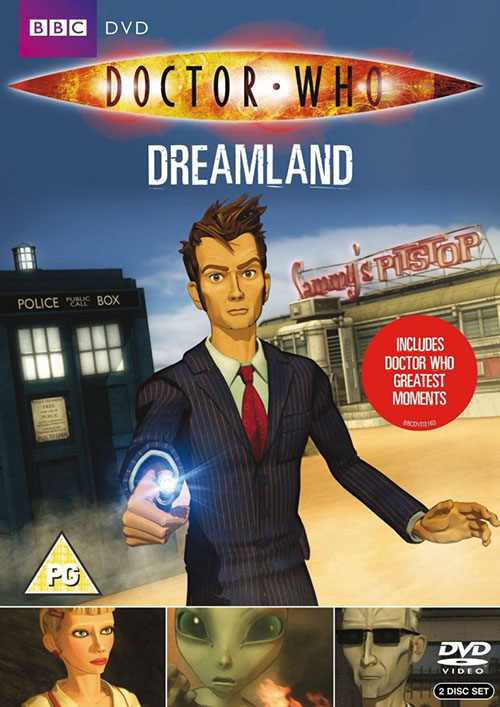 The thing is that I understand the urge to crank out web-based material, especially now in the 2020s. Back in 2009 these webisodes were practically novel, and the effort made certainly is interesting. While David Tennant did come back to voice his character, and even dragged along his then-girlfriend (now-wife), Georgia Moffat (although she doesn't play the Doctor's Daughter here but some different, random companion), overall this is a very bad episode of Doctor Who. It's not just because the episode is poorly animated, although that doesn't help the quality at all, but because everything about this (outside of the voice actors) makes it feel as cheap as possible. Well, that and the story is just bad.

The Doctor ends up traveling to Dry Springs, Nevada, 1958. He's there, ostensibly, to grab a bowl of chili (because, as he puts it, there's something special about diner food pre-1962). Naturally, as with any time the Doctor arrives somewhere, there's immediate danger to follow. A man in black comes into the diner to look for an artifact that was lost years ago and the diner's proprietor, Cassie (Moffat), has a piece of space junk that just happens to fit that bill. The Doctor tries to stop Cassie and her friend, Jimmy (Tim Howar), from preventing the guy from taking the item, but they fight anyway and it leads the Doctor to insert himself, distracting the man in black so all three can flee. Space junk, though, is only the first of their issues as they're soon attacked by a giant alien bug, then bailed out by the U.S. Military who immediately arrest them and take them to a secret military base, Ara 51 (aka "Dreamland") to be "processed".

This then leads the Doctor on a whole long adventure fighting against the military and a race of evil alien bugs, the Viperox. These bugs came to Earth in search of another alien species, the greys, who crashed on the Earth when they were attacked by the Viperox 11 years earlier. Since then the U.S. Military had kept them under wraps, but they hope that with an alliance with the Viperox they can get a weapon they can use to fight back against the Russians and win the Cold War. The Viperox, though, are not reliable allies and might just, in fact, have their own plans up their exoskeletal sleeves.

Before we get into what doesn't work about this episode, and there is a lot, I do want to take a moment to commend the one thing that does work: the voice acting. While this might be a cruddy, cheesy little animated special, David Tennant leads a voice cast that actually is pretty great. It's Tennant that does the majority of the work here, mind you, giving his all to voice a performance that oozes all the charm and charisma you'd get from one of his live-action performances as the Doctor. He sells what's going on, never phoning in his performance, and that they elevates the rest of the cast, from Moffat and Howar, to Stuart Milligan as the Colonel in charge of the base and the always reliable David Warner as the evil alien Lord Aztok. The voice acting is so good I almost wish this were an audio drama so I didn't have to watch the awful animation. 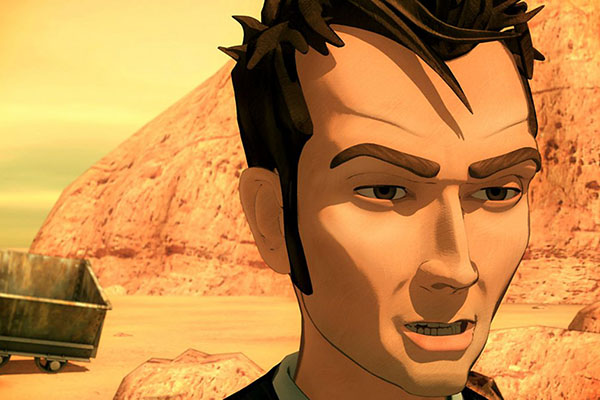 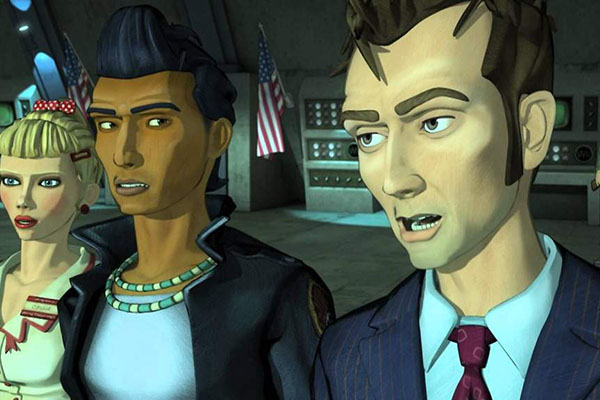 The animation is, without a doubt, absolute trash. I've seen bad animation before and sometimes the production can use janky animation to highlight or sell a story -- anyone that's watched South Park knows how that show could rise about its construction paper medium. "Dreamland" has animation that's just about as cruddy, but it's done with 3D models that just look astoundingly bad. I'm not sure if any animated special could rise above 3D models this poor, but it would take a lot of effort and this show didn't have it in it.

The models aren't just sub-quality; they're early PlayStation level cut-scene bad. They make the poor animation in sections of Final Fantasy VII look bad. Hell, the TV show Reboot from twenty years earlier had better animation and that show looks like utter crap now. There's bad and then there's "Dreamland" bad and there was no way something this glaringly ugly could ever rise above its material. It was instantly hobbled by a production house cheaping out as hard as it could and the special never recovers.

Not that the story really provides any way for the show to elevate itself. This is a bland and simple Doctor Who tale that really doesn't do anything special to set it apart from just about every episode that came before. Yes, David Tennant's Doctor has fun running around but he doesn't really have an arc here; like with most episodes he just shows up, does some stuff, and then leaves. The rest of the cast of characters are as bland as they can be, sucked along for the ride in one form or another while they barely show any development or direction. These companions aren't the type to assert themselves and prove their own mettle, they just hang around the Doctor because that's what you do. End of story.

The villains, meanwhile, are awful. The Viperox are one-note bugs that don't have any real back-story or anything of interest going on. The Doctor says, by the end of the episode, that hundreds of years later the Viperox will be magnificent but we don't see anything about that here. They're bland as can be, through and through, and even a fun voice performance from Warner can't sell the fact that these bugs are as empty inside as their exoskeleton. It's tragic because to make this episode work we needed a good villain and the Viperox are not it. 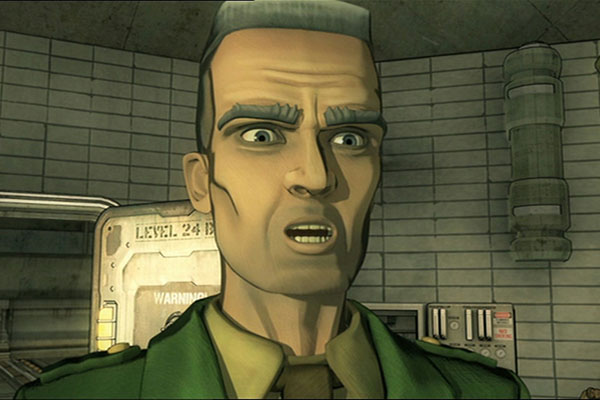 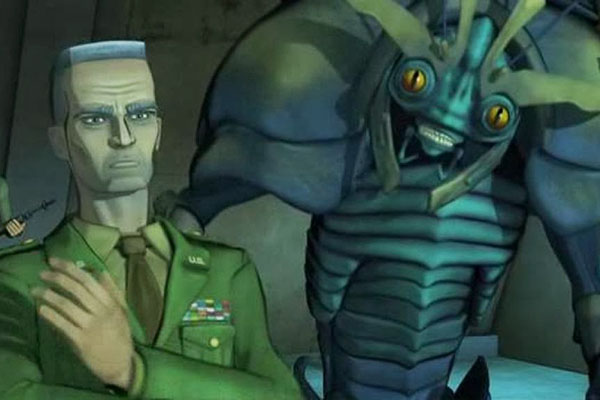 The Colonel, amazingly, fares worse. While the Viperox at least are shown to be territorial monsters and have an actor that can sell that at least a little, the Colonel is hobbled by a story that makes him look like a complete idiot. At every turn he and his men fail time and again to capture the Doctor and his companions, putting them in Bond Villain-level situations where, clearly, the Doctor is going to escape the second they turn their back... which he then does. And the Colonel's whole reason for this is because he believes the Viperox is the U.S.'s ally because... reasons? Seriously, how did this man ever get promoted? Why is this moron allowed to lead a whole military base?

Just, through and through, this is a bad adventure. Yes, I enjoyed David Tennant's voice performance but that's not enough to sell this story. If anything this episode proved to me that I need to go and listen to Tennant's audio dramas as the Tenth Doctor; I bet those are amazing. This adventure, though, isn't even worth the time I spent watching it. It's included in boxed sets of the Tenth Doctor's tenure, bonus episodes for completionists, but once you've seen it once I doubt you'll ever pop in the disc to watch this animated adventure again. Hell, do yourself a favor and don't even bother watching it the first time.