And with this film the Dark Universe is dead. If you followed monster movies, or Universal horror over the last few years you'll know that the studio desperately wanted to put together a cinematic universe to rival Marvel. The only problem for them was that they didn't have any superheroes in their stable; what they had instead were their classic monsters, characters that hadn't really been able to make a dent at the Box Office in the last 60 years of film (see also: Dracula Untold). Sure, Universal pioneered the shared continuity way back in the 1940s but they had to try and do it again for modern audiences. 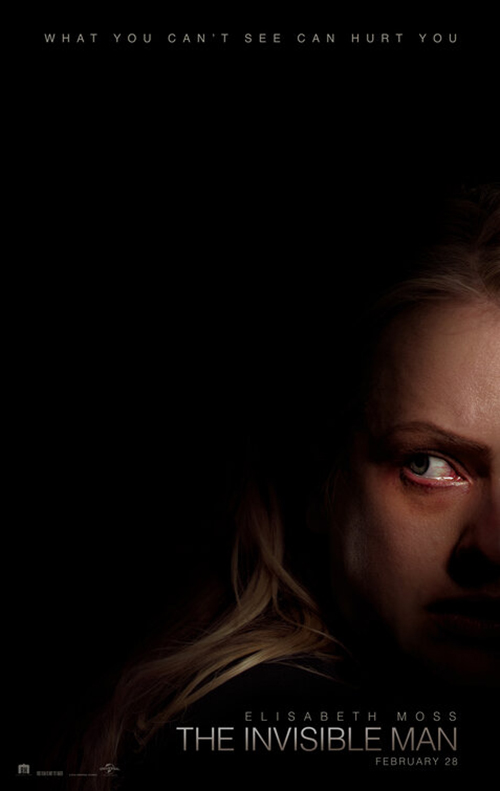 This resulted in a massive plan, titled the "Dark Universe", with Universal casting a ton of stars in lead roles -- Russel Crowse as Dr. Jekyll and Mr. Hyde, Johnny Depp as the Invisible Man, Angelina Jolie as the Bride of Frankenstein -- and it was all supposed to start with 2017's The Mummy. I don't know if you heard, but that film was considered an unmitigated disaster at the Box Office, and when it tanked out (much like the previous attempt at launching a franchise, Dracula Untoldff), Universal was sent scrambling. All their lofty plans for the Dark Universe were cast aside, all the contracts that had been signed were allowed to expire (with plenty of actors and other associated people probably being paid handsomely to do nothing), and the whole continuity was put out to pasture.

But then, in 2019, rumors started up that Universal was moving ahead with the reboot of Invisible ManOriginally created by H.G. Wells, The Invisible Man is probably best known from the series of Universal Monsters featuring various versions of the titular character.. Was this going to be a continuiation of the Dark Universe? No, not in the least. Watching the film in theaters the first thing that struck me as the complete and utter lack of a Dark Universe logo -- whatever plans Universal has for their monsters going forward, it won't involve any hint of the continuity from Mummy '17. Instead, if this new Invisible Man is any indication, we're looking at smaller movies telling tense, tight, self-contained tales of horror. And, honestly, I think that's probably for the best.

In The Invisible Man, we're introduced to Cecilia Kass (Elizabeth Moss) just as she's leaving her boyfriend, Adrian Griffin (Oliver Jackson-Cohen, who, yes, also appeared in the 2013 Dracula). Adrian is abusive and controlling and, after drugging him with sleeping pills, Cecilia flees, driving away by her sister, Emily (Harriet Dyer), to live with their childhood friend, James (Aldis Hodge), and his daughter, Sydney (Storm Reid).

Soon after escaping, Cecilia gets the news that Adrian is dead of an apparent suicide. In his will, Cecilia is granted $5 Mil as long as she isn't found guilt of any crimes or being mentally incompetent. At first Cecilia is relieved -- he's finally gone -- but then she starts to get the sense that someone is watching her. She begins to think that Adrian, a leader in optics tech, faked his death and is trying to make her look crazy. And, wouldn't you know it, really strange things start occuring around her, making her look insane... and murderous. Can Cecilia find a way to prove her innocence, and that she's not insane, before she's locked away forever? 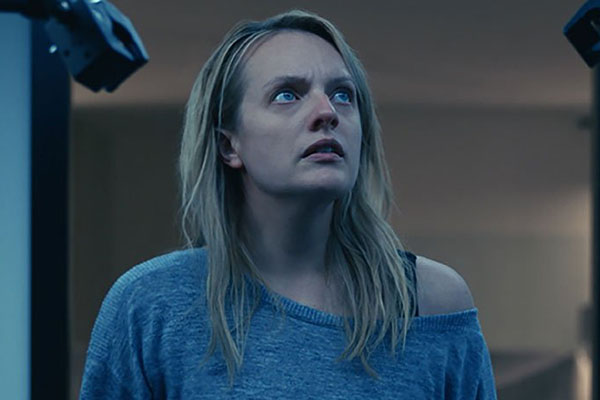 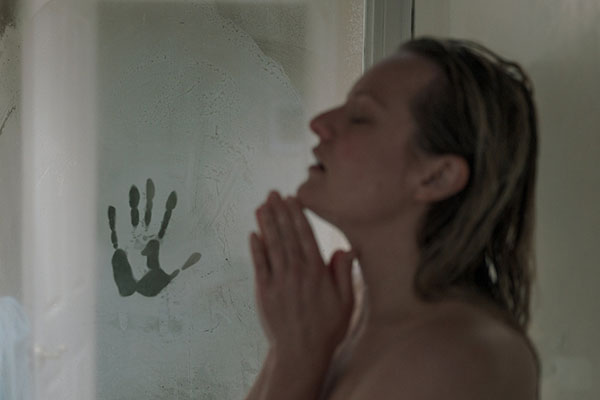 I have to credit this film as, first and foremost, it finds a new story to tell from the concept of The Invisible Man. Past movies, both in the Universal MonstersThis franchise, started off with Dracula and Frankenstein in 1931, was a powerhouse of horror cinema for close to two decades, with many of the creatures continuing on in one-off movies years later. series as well as the unrelated Hollow Man, have focused on the titular monster. While other characters have been involved, the monster has always been at the center, his story, his subject. Here, though, the monster is not only barely glimpsed for much of the film (and not just for practical reasons), he's not even the central character. Cecilia is out focus; it's her story, he journey, and her horror. Adrian may be the invisible monster, but Cecilia is the actual protagonist.

This recontextualizes the story in a way the previous versions never managed and puts this film more in line with many other Universal Monsters films. When you watch a Dracula movie, for example, you're not rooting for the monster (well, okay, I am but I'm weird) but the heroes that will stop him, but in the case of the Invisible Man, so often the film was focused on him that he was the protagonist even when he was also the monster (aka, the antagonist). Finding growth for the characters was hard when the monster was the lead role and, well, most of he time we knew how that was going to end (with the monster dead). Changing the content of the monster allows for more growth from the lead and a fuller, richer story.

As a benefit of this we can actually get a complex character study of someone that really matters (because, likely, they won't end up dead by the end of the film). Cecilia is a powerful character to focus on, a woman in an abusive relationship who has to go through desperate means to escape only to be stalked and hunter by her jealous ex. It's a story that resonates, especially in the #MeToo era; the monster is used both in the literal sense here as well as a way to focus on the psychological and emotional damage an abusing relationship can cause. The movie tells that Cecilia will always been looking over her shoulder, always waiting for the other shoe to drop, and that's even before she realizes that (spoiler warning for the rest of this sentence and the next paragraph) Adrian has made a suit that allows him to be invisible.

That's another innovation that I really liked. As you will note in my review of Hollow Man, one of the things that really dragged that movie down for me was the bad science -- How can his hair turn invisible? How can he eat and the food is invisible? How do his eyes work when the rods and cones are invisible?. Here, though, the movie posits a kind of suit that looks at the outside world, via a series of cameras, and then projects the world around it so that it appears completely invisible. No need to worry about hair, or eyes, or food as everything inside the suit is still totally normal (cuz it's the suit that does the "science magic"). It's a smart solution that really works in the context and feels believable considering the state of modern technology.

(And, for those wondering, end of spoilers.) 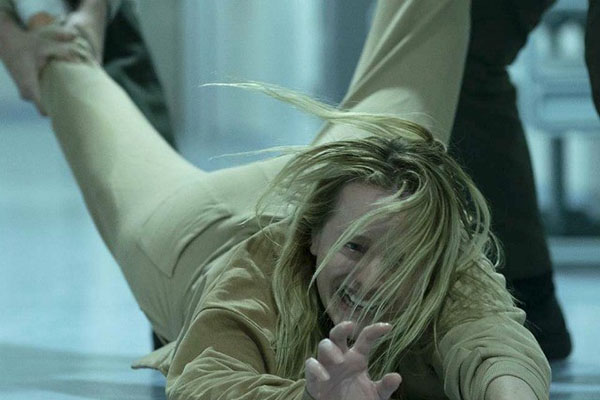 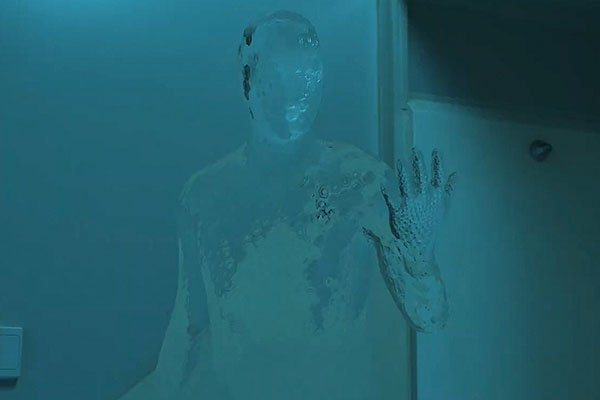 This solution also means that I was able to let me brain relax and just enjoy the story, and the horrors of the film. We can get involved in her story as Cecilia is slowly driven mad by what's going on around her (some of which she just chalks up to her own imagination before the evidence starts to pile up). And as she slowly falls further and further into insanity (she's the one driven mad by the Invisible Man instead of him becoming mad on his own) the horror steadily ramps up.

The flaw with the film comes in the last act. This is where everything is revealed (mild spoilers here) and all the work the film has been building kind of falls away. The abusive ex story takes a bit of a back seat as Cecilia changes, becoming a harder, tougher woman. While I appreciate her evolution it does undercut the story the movie was building -- most women don't have a literal monster chasing them and most of them, even after leaving their man, don't find the strength to become an action-thriller bad ass. Yes, Hollywood wants the Hollywood ending but the film undercuts itself in a way that seems to weaken its own argument.

Plus, honestly, at a certain point the film loses its horror, becoming a more traditional monster-action film. It's got some solid thrills, and plenty of great CGI action (I really love the effects here, such as in a sequence with a can of paint), but the monster stops being a scary monster at a certain point. Again, I get why based on the trajectory of the story but I have to wonder if maybe the writers put themselves in a corner with the direction the story took, leaving the movie a little weaker in the process.

Still, considering the reboots we've had over the last few years (Dracula Untold, The Mummy '17), The Invisible Man does make the case that Universal can, in fact, reboot their films for modern audiences and make those movies quite interesting. This is, far and away, the best Universal Monsters product we've had in years, and I don't mean that as a back-handed compliment. True, if there had been a stellar smash hit in the last decade, this film might not be the cream of the crop anymore, but then if either of the reboots before had been great, I doubt we would have gotten this Invisible Man at all. It might be a little flawed but it's still got a solid idea and a decent grasp of its message. If Universal looks at doing more films like this in the future I honestly think their Monsters line could become the rich, strong series they were hoping for.