The Universal MonstersThis franchise, started off with Dracula and Frankenstein in 1931, was a powerhouse of horror cinema for close to two decades, with many of the creatures continuing on in one-off movies years later. came about in the 1930s but persisted long past that decade. During that time the kinds of movies the general public was looking for shifted, and with a war on -- World War II, to be specific -- the public wanted adventures that played up the U.S.A. and show how those Germans needed to be taken down. A villain that wanted to rule the world via his invisibility formula seemed like something the other guys would be interested, not a good, red-blooded American! With a war on, we were all for truth and justice and apple pie. American values. 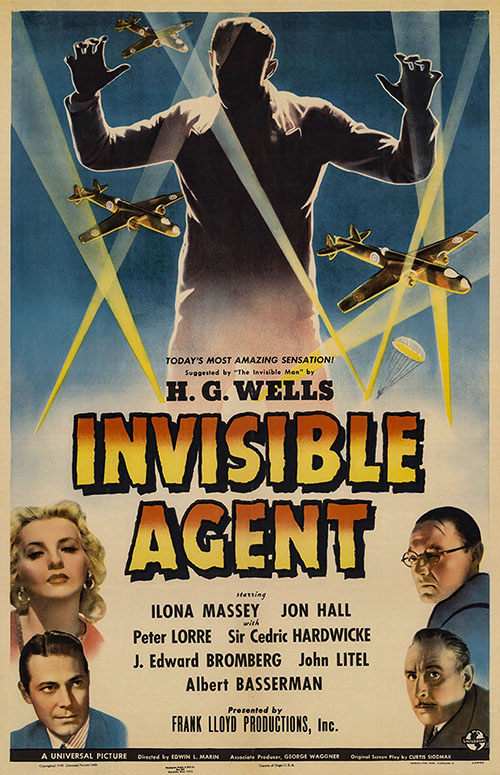 That's the big reason Universal shifted their Invisible Man series over to wartime propaganda. Although Universal never seemed all that concerned with continuity -- most of their monster movies were only loosely related at best -- this film does at least acknowledge the first two films in the series (although, sadly, not The Invisible Woman) before throwing out most of the intent of the series to craft something more in the vein of an espionage thriller, just with a hero who happens to be invisible. Need to know which Griffin scientist our hero is related to? Wondering if they're going to bring up the fact that the invisibility serum will drive a person mad? Don't think about it because the film really doesn't.

For the Invisible Agent, we're introduced to Frank Raymond (aka Frank Griffin, grandson or nephew or something of the original Invisible Man, played by Jon Hall), working in his print shop when he's interrupted by German agents. It seems they've figured out who he is (heir to the invisibility formula) and they want to buy the formula off of him. Being a proper, red-blooded American, he refuses fearing what the serum could do if it were in the hands of the Axis. After threatening to kill him. Griffin fights off the agents and escapes with the formula. Months later, our hero goes to the U.S. and offers to assist them with a mission to gain German intelligence and bring it back to the Allies. The only catch: he won't give the Americans the formula, he has to be the agent that goes over.

Parachuting behind enemy lines, Frank quickly makes contact with embedded agent Arnold Schmidt (Albert Basserman), who then sends him on to Maria Sorenson (Ilona Massey), who is the love interest of a high-up German officer, Karl Heiser (J. Edward Bromberg) -- Maria will get key information from Heiser while Griffin, still invisible, listens in, and then he'd take that information. use it to get the files he needed, and go back to the Allies. The only problem is that the Germans are on to the plan, suspecting the Invisible Agent may be among their midst. Thus it's a game of cat and mouse as Griffin attempts to avoid detection while gaining all the information he needs for the war effort.

Seeing a Universal Monster converted into a wartime hero really wasn't that odd. Sure, the original Invisible Man was a villain, driven mad by the drugs, and it would have been nice to see some mention of that (the worst this movie comments is that the drug makes Griffin awkwardly sleepy at time, a problem never mentioned in the series before). But on the whole, taking this film series and giving it a wartime revamp works well enough. I mean, just about ever bit of pop culture of the era was focused on the war at that point -- just look at how many comic book heroes supposedly went and fought in the way during that era, with just about every hero kicking Hitler in the butt at least once. If Universal were going to wartime propaganda, there were worse concepts than using the Invisible Man as a hidden agent. It's at least a creative use of his "power". 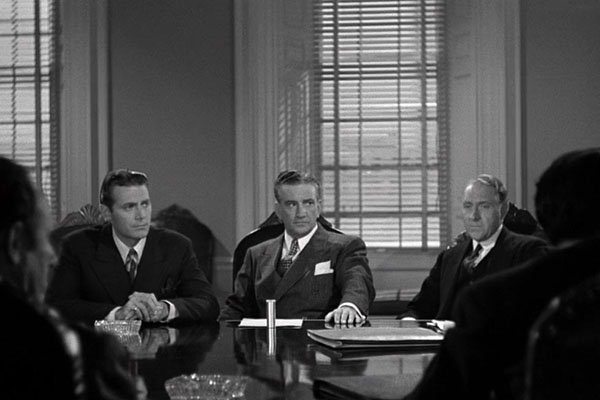 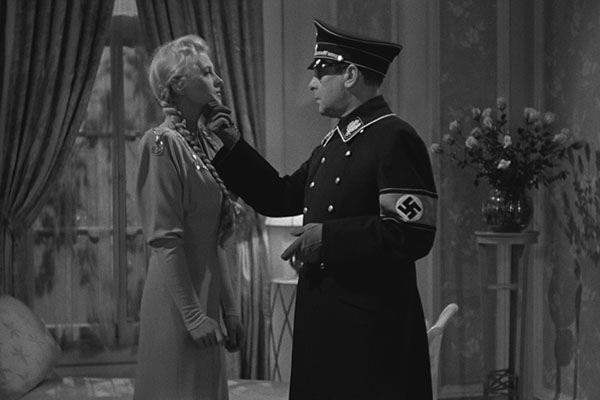 What I don't like is how sloppy this movie is otherwise. It starts with the villains, the Germans and the Japanese, neither of which are very effective as villains. Considering when this movie came out, and the social mores of the era, we can't expect truly great villains (nothing too scary that might horrify the kiddies), but it would be nice if the villains here were anything more than bumbling fools. I get that audiences wanted a villain they could immediately hate, but these are Nazis so we already hate them. Giving them something more to do than oaf around and then get bested, time and again, by our Agent would have added some depth to their side of the story. They can still be bad guys but make them believable at least.

It's like the studio thought the best way to sell how much better the U.S. is than the Nazis was to make the bad guys go broad with their comedy, pratfalling and suffering at every turn. For the modern eye this just made me feel bad for some of the characters which, when we're talking about Nazis is really the wrong message to send. A couple of the villains -- Conrad Stauffer (Sir Cedric Hardwicke), Baron Ikito (Peter Lorre) -- are at least less bumbling but they're still easily outmatched by the Griffin, a guy, mind you, who has absolutely no training in espionage. These are the guys leading this section of military intelligence for the Axis and their easily bested by a guy who, up until a couple of months earlier, worked full-time in a print shop? I don't see it.

The other major issue I had with the film is that, for all his talk of aiding the war and working with the Americans, Griffin really isn't that likable of a guy. He's mean spirited, torturing any of the Germans he can with pranks (and worse). He actively leads a number of them to their deaths, on purpose, just because he can, and then laughs about it afterwards. Again, I understand the intent of this movie when it came out but it's just another part of the film that hasn't aged very well at all.

Of course, speaking of things that haven't aged well, how about the casual "yellow-face" of having Hungarian-American actor Peter Lorre playing a Japanese military officer. I honestly didn't really what nationality he was supposed to be when he came on screen originally (since this was filmed in black and white and Lorre didn't bother with a Japanese accent, even a horrible one), but once someone said he was Japanese, I was more than a little put off. Again, that comes from modern sensibilities and this film is very much a product of its era. The film wasn't meant for us, it was meant to be played for people in between a couple of propaganda cartoons and a few newsreels, on loop in a theater. U.S.A.! U.S.A.! 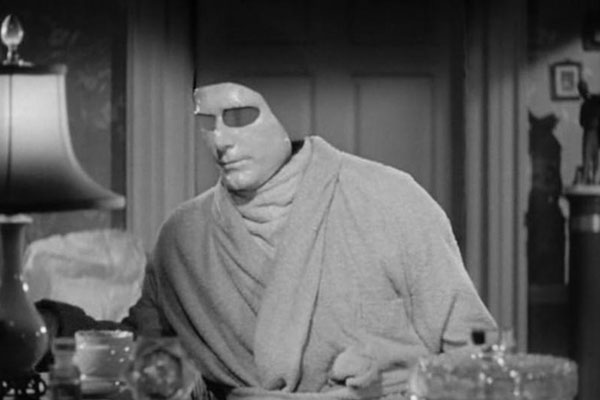 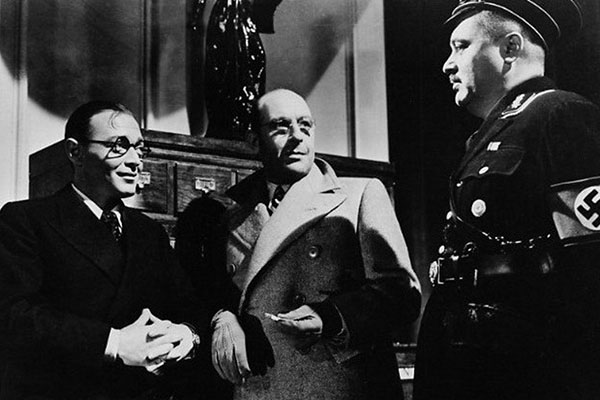 Production wise, the film is film. It looks on par with other Universal Monster films, even if the effects of making a guy invisible still had some flaws. Massey and Hall are likable enough and have good chemistry together, but this movie doesn't do anything to push the storytelling of this series or propaganda films of the era. It's a perfect fine movie for the audiences it was intended for, but it's not very interesting a few decades removed. If you're really interested in an Invisible Man film, Universal has plenty of others to choose from. I'd suggest avoiding this one at this point, it's just not worth your time.