Hollow On the Inside

Director Paul Verhoeven is know for a certain kind of movie: viloent, over-sexed, and yet, also, cutting edge. He's certainly quite a name in sci-fi, considering he directed the hit films Robo-Cop and Starship Troopers. While those films have lived on as classics, there's no denying there's a certain cheesy gloriousness to both of them. Much of this is, of course, intentional -- -you can't watch Robo-Cop with it's over-the-top fake ads, or Starship Troopers and its propagand-tastic "Would you like to know more?" moments and not think them delightful cheesy -- but there's also a "teehee, so dirty" quality to his films. 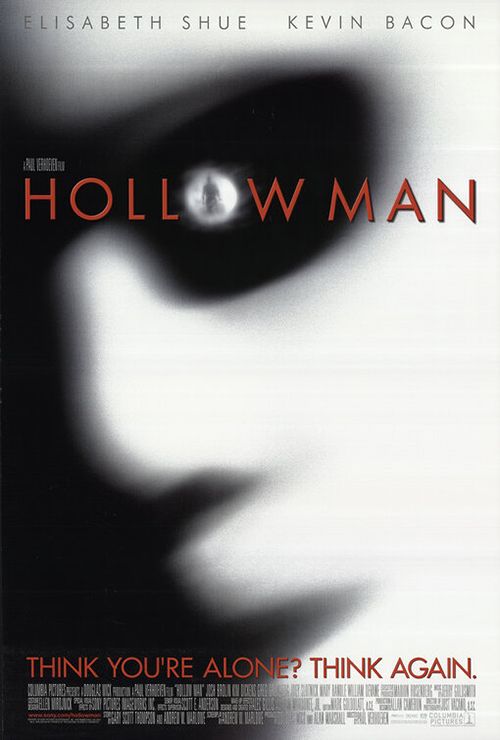 I mean, lest we think I'm being harsh on the director, this is the guy that mad Showgirls when he was at the height of his popularity. I know that movie has its defenders, and yes it does try to tell a story of depravity on the Vegas strip, but it's mostly remembered for its hard NC-17 rating and lackluster performance from Elizabeth "Jessie from Saved by the Bell Spano". No one is going to argue that movie, or many of the others Verhoeven made -- films like Flesh + Blood or Basic Insinct -- were high art; fun for what they were, yes, but not exactly Academy Award winning cinema (not in the "big" categories).

All of that is a means of saying that when Verhooven announced his next project, a quasi-retelling of the Invisible ManOriginally created by H.G. Wells, The Invisible Man is probably best known from the series of Universal Monsters featuring various versions of the titular character. titled "Hollow Man", we all knew what to expect: sex, gore, violence, and tits. While any number of Verhoevens films have a political edge to them (in the sub-subtext) mostly we expected the film to indulge its purient interests more than anything else. And, on that front, Hollow Man didn't dissapoint; if all you wanted from the film was a naked Kevin Bacon creeping on women, this film gave it to you in spades. The question I had watching the movie, though, was who really wanted to see a naked Kevin Bacon, let alone one that was creeping on women?

In Hollow Man, egotistical, super-genius scientist Sebastian Caine (Bacon) is on the verge of a break-through in the field of "making things become invisible and then, hopefully, reversing that"; while he's managed to make any number of animals invisible, doing some sort of "quantum" mumbo-jumbo with a solution injected into the creatures, reversing the process has always lead to their deaths. However, when working on the molecule, Caine has a breakthrough and makes a stable version that, when injected into an invisible gorilla, does in fact reverse the process. Caine immediately decides to move on to human trials despite the objections of his second in command (and ex-lover), Dr. Linda McKay (Elisabeth Shue). He overrules her, cajoling her into letting him be the human guinea pig, and the project moves forward.

Turn Caine invisible works like a charm (with the body only feeling some mild distress). Getting him back, though, proves more difficult as human DNA is more resistant to the new molecule than gorilla DNA (something you'd think could have known from a single simulation). The longer it goes on, the harder it is for Caine to keep a grip on himself. His mind is pulled apart bu the situation he's in, and soon he goes full-tilt villain, lashing out at everyone around him. Realizing the "power" he has (as someone that can go anywhere and do anything, more or less), he decides to kill his team and nuke the whole projects (so they can't stop him in the future). It's up to Linda and the rest of the team -- fellow scientist Matt (Josh Brolin), veteranarian Sarah (Kim Dickens), and assistants Carter (Greg Grunberg), Frank (Joey Slotnick), and Janice (Mary Randle) -- to stop Caine before the madman escapes, never to be seen again. 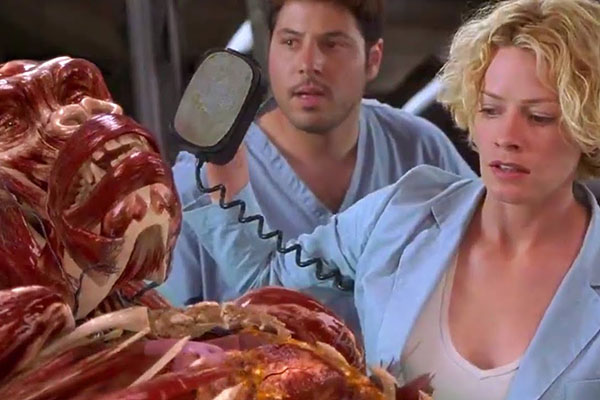 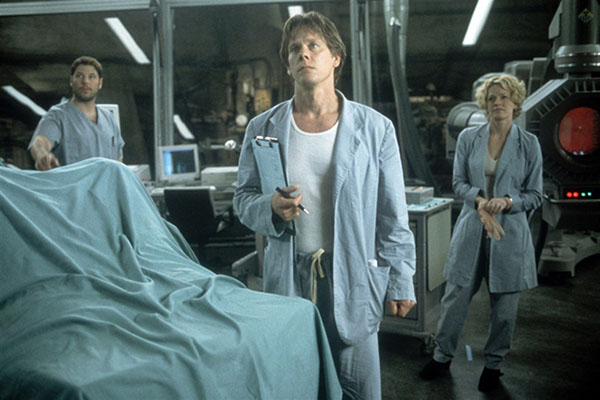 At only a surface level, Hollow Man succeeds. If you just shut your brain off and let the film do it's thing, it's not so bad, really. The science of the film is dumb, sure, but the movie trucks along at a decent clip, never sitting still for too long so the audience doesn't get bored. It's always pushing ahead, just like Bacon's character, making big leaps in logic but also distracting us with violence, or intrigue, or nudity, all so we don't think all that hard and just get into the groove of the film. It's dumb but entertaining, a simple film that, if you don't want to think at all, can have its charms.

The problem with Hollow Man is that it's so dumb it's hard to shut your brain off long enough to enjoy it. I will admit that even when watching the old Universal MonstersThis franchise, started off with Dracula and Frankenstein in 1931, was a powerhouse of horror cinema for close to two decades, with many of the creatures continuing on in one-off movies years later. films I had problems with the "science" of the films. If someone is invisible they have to be naked because the clothes aren't also invisible, every film does it as an injection and the body's vascular system movies the formula through the body. That's fine except for the fact that hair and nails wouldn't go invisible since they're just dead cells on exterior of the body. Hell, any scabs would also remain visible by that logic, but that's never addressed in the films. The only one that even has a solution to that is the The Invisible Woman and that's because it's a booth and a special ray, along with an injection, that allows for the invisibility. That I can accept.

Hollow Man, though, tries to dress it up with more science speak and sci-fi trappings, but at the end of the day it's still someone being injected with a formula and then, for some reason, every bit of them (including hair/fur and nails/claws) goes invisible. There's no explanation for it -- the best this film can do is a "quantum phase shift" which means... nothing. It's pseudo-science that really tries to make itself look like real science, but it's too dumb to know how to actually do that right.

It doesn't help that the big selling point of the film was its CGI. The first time we see the whole process in action is when the science team makes a gorilla visible once again. We see the injection go in and then the solution slowly shifts the body, from veins to organs to skin and fur, into the visible realm. It's very cool to watch, and then CGI team better have gotten all kinds of awards for it, but the setup is just "realistic" enough that you can't help be think of the science behind it and have to wonder, "why did their hair and nails also go invisible?" Hell, since we can see all their organs and everything going visible one piece at a time that means they're invisible through and through, so how do their eyes work when all the rods and cones are invisible? How do they eat and drink (and, let's be honest, shit) without all of that being visible in them constantly? None of it was made ivisible via serum so what's the trick of it? 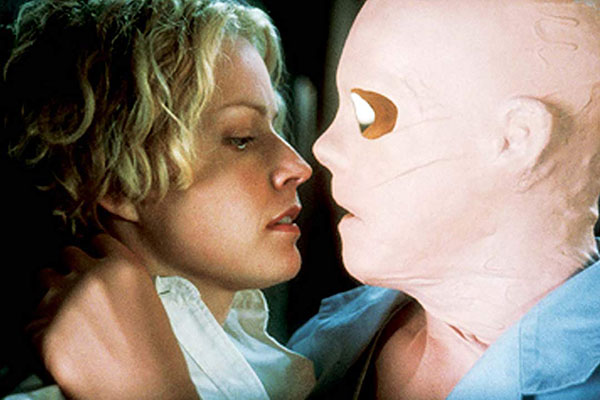 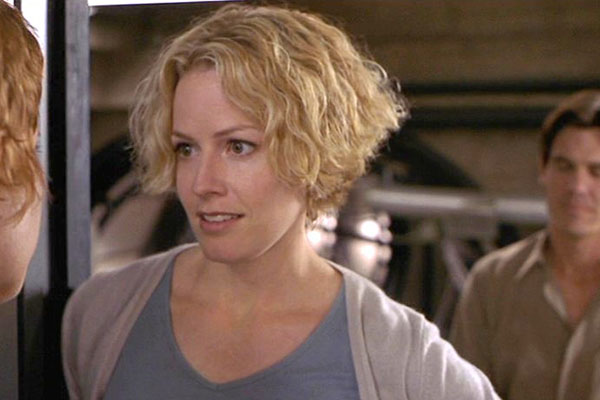 Moving past the dumbness of the not-scientific-at-all-science, we then have the fact that the movie really is quite shallow in its approach to its main character. Kevin Bacon plays Caine as a shallow, evil, vile guy even before he becomes invisible. We're supposed to accept that the power given to him by the serum unlocked some hidden well of evil within the man but, honestly, nothing is different about the character before or after the procedure -- he's a vile, creepy piece of shit before he becomes the first human test subject, and he's exactly the same level of vile jerk after. The only thing being invisible did to him is it let him actually rape a woman without her seeing her attacker (which, from the fact that we saw him creeping on the same woman earlier, makes us think he would have done this anyway, invisible or not, if given the opportunity and means to not get caught).

The film, in fact, revels in just how far the character can go with his creepiness. He'll lust after women, expose himself to them, strip them, grope them, and rape them, but he's never actually punished for doing any of these things. It's only when he finally goes on a murderous rampage that the movie thinks, "hey, maybe we should actually stop this guy and show him the error of his ways." Considering the political climate of 2020 (and the version of The Invisible Man we've gotten with a very #MeToo outlook on creepy invisible men) Hollow Man is positively backward in its approach to women and sexual assault. It wants us to think, "what he's doing is bad," while also lusting after all the nudity at the same time.

I want to think Verhoeven was trying to make a point of it, that he was trying to say, "everyone comes to my movies for the sex and nudity so I'll give it to you but make it as creepy as I can." If the film had been shot different, had been a little less leering and lustful, it might have been able to make that point. But, again, the film is a little too dumb to really know how to handle its subject matter so whatever point it maybe was trying to make is lost in the trashiness of the final product.

Hollow Man is a film is a gleaming, shiny surface that never manages to have any substance or voice. It's violent and sexualized, with a ton of cool looking CGI, but those are also thing that get in the way of any kind of supposed message the filmmakers might have wanted to convey. Like it's titular character it's creepy and gross but, most of all, it's hollow through and through.