Next Avengers: Heroes of Tomorrow

Although I will admit that I haven't been won over by the Marvel Animated FeaturesBefore the Marvel Cinematic Universe was even a thing, before Marvel could even hope their theatrical aspirations would take off, the company tried to launch their heroes with a much more modest idea: a series of animated features starring the heroes Marvel had access to. up until now, I haven't outright hated any of the films. They're been uneven but, at the same time, they've clearly had a vision for the stories they wanted to tell. And, as a first draft for what would eventually grown to become the Marvel Cinematic UniverseWhen it first began in 2008 with a little film called Iron Man no one suspected the empire that would follow. Superhero movies in the past, especially those not featuring either Batman or Superman, were usually terrible. And yet, Iron Man would lead to a long series of successful films, launching the most successful cinema brand in history: the Marvel Cinematic Universe. these early animated movies hinted that there were good stories to tell with the AvengersMarvel's answer to DC's Justice League, this team features many of Marvel's biggest superheroes working together to protect the world and avenge its evils., if only the films could get out of their own way and tell them. 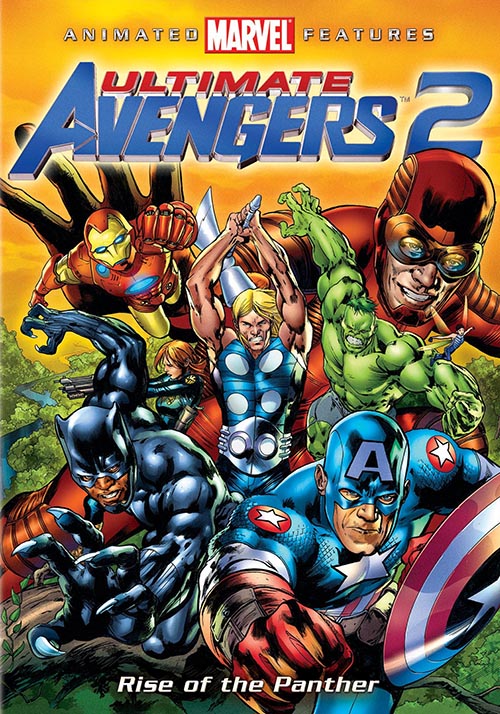 The fifth film in the series, though, really makes me question if Marvel (and Lionsgate) really had a clue of who their audience was and what kinds of stories they wanted to tell. Next Avengers, a movie about the youn children of the Avengers having to fight a battle without their parents, splits its time between being a kid-friendly Saturday Morning Cartoon-style adventure and a darker, nastier, made-for-adults comic book tale. Neither approcah blends well with the other and, in the end, the two competing ideas war so much that the movie becomes a muddled mess. Which is sad because, when it's good, Next Avengers is really good.

Set sometime time years after the events of Ultimate Avengers 2, Next Avengers gives us four kids -- James (son of Captain America and maybe Black Widow), Torunn (daughter of Thor), Pym (son of Hank Pym and Janet Dyne), and Azari (son of Black Panther and Storm) -- raised by Tony Stark (aka Iron Man) in seculsion. The reason: Ultron, a powerful robot that had taken over most of the world. This villain killed all of the parents of the kids (off-screen, before the movie gets going) and, if he knew they existed, he'd come for the kids too. Which he does when one of them accidentally alerts Utron to their existence.

The kids are forced to flee the hididen home they've lived in most of their lives, but Iron Man is defeated and captured by Ultron. Faced either with running for the rest of their lives or fighting for their future, the kids decide to go to Ultron City to find Tony, the only parental figure they know, and find a way to defeat Ultron once and for all. In the process they gain the help of two more heroes -- Hawkeye (son of Hawkeye) and the original Hulk (Bruce Banner). But will their combined forces be enough to defeat Ultron and save the whole world?

Credit where it's due, the basic story of the film is mature (as in not preschool-level kid friendly) and interesting. It's a bold move saying, "you know all those heroes you loved from the last few movies? Yeah, they're all dead." I respect that decision. It actually gets you to care more about these kids because it adds a dramatic plot point to their past, right up front. It sets stakes and let's you know just how dark the world got in the intervening years. That's some heavy storytelling right there. 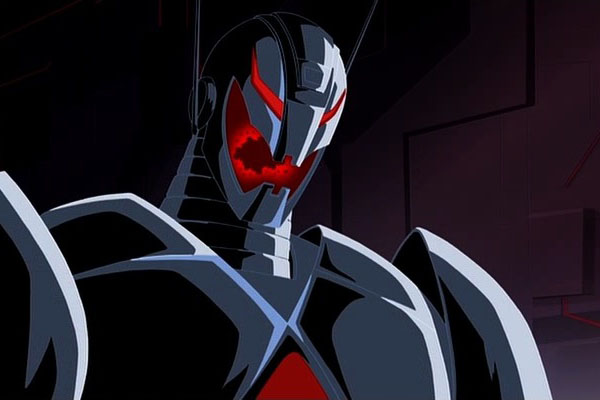 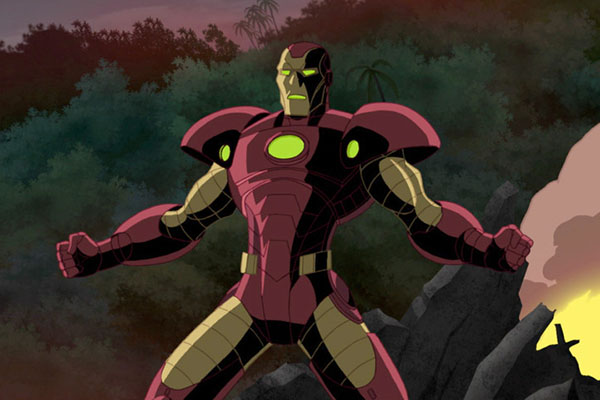 The problem is that clearly the person who wrote the story treatment for the film wasn't the person with final say over the tone of the final movie. While the story may be heavy and dark, the kids themselves act like they're in a rendition of Marvel Babies. They're all hyper and amped-up, about as young kid friendly as they could be, which drastically changes the tone of the story. You've have the kids getting into slapstick antics, bouncing off each other, burping and farting and being silly, while Tony Stark is lecturing them about how Ultron enslaved the world. The audience, regularly, is forced to endure severe tonal whiplash.

It's not just the story that solidifies this weird tone but the art for the show as well. All the adults are drawn as they were designed in the previous films, and Ultron matches this style. All the kids, however, are drawn in this weird, super-deformed style that make them all look like they have giant bobbleheads. This make them look like little action figures, tiny toys for the kids to lust after, but not realistic people (even in the context of this series of films). As with the story, the artwork ends up with this weird whiplash in style.

It's tragic, too, because I really do like the basic story the film came up with. These four kids have been secluded their whole life before suddenly being thrust into a world they don't understand. Very quickly they have to grown up, find the heroes within, and help save the world, all while they should still be going outside to play and have fun. And pitting them against Ultron, a robot that doesn't care about feelings or emotions, that ddoesn't understand kids or their emotional attachment they could have to parents (or parental figures) makes for a solid contrast. There is real potential for this story in a different context.

I even appreciate the fact that this movie is able to make Ultron work (years before Avengers: Age of Ultron tried, and failed, to do so). Ultron is a different kind of villain from what we've seen in this series before. He's not motivated by greed or desire but the simple idea that humans are a threat that either need to be subjugated or eliminated. Other villains feel fear, heroes can try to bargain with them, but the Untron we're given here can't be reasoned with, can be made to fear. He's an other, cold and calculating and very effective. If only he could have been put in a move that better understood how to build a story around him; he's a great villain in search of a better movie. 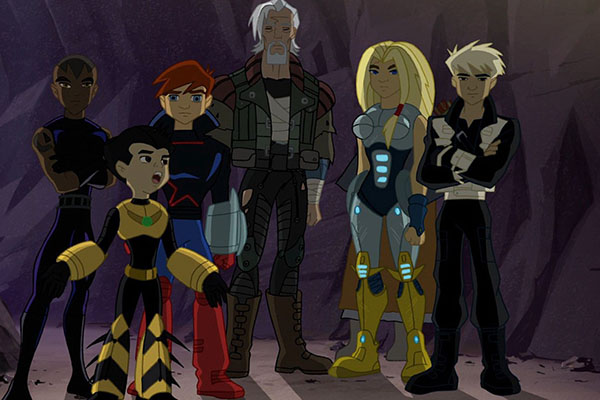 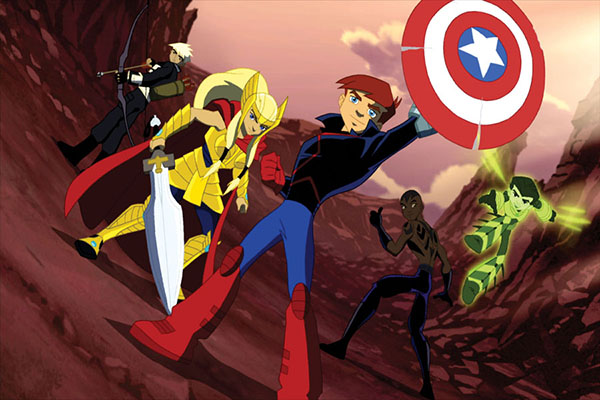 Additionally, I liked most of the kid heroes. little Thor and little Cap try to measure of to their parents while using the powers they're given -- Torunn with her powerful sword and ability to taken a lot of damage, James with his holographic shield and sense of right and wrong. Little Black Panther, Azari, has bother the powers of the Panther as well as the lightning of Storm (although that's not really explained well in the film), and he's also got a solid sense of who he is and who he wants to be. These three actually are great characters, or would be if they weren't saddled with Pym.

Pym is just the worst, the absolute worst. He's all the little kid tropes from other cartoons rolled into one, annoying and obnoxious with just a hint of Urkel's "did I do that?" Every stupid joke, every silly moment, every terrible idea has Pym right at the center of it, and Pym is front and center basically from the moment the kids are introduced at the start of the film. If this film would have simply not had Pym in it at all it would have gone a long way to redeeming it's whole story and setting. He's that bad.

And tragically it's what brings down the film. Marvel really didn't know what kind of movie they were making so they made one that was supposed to be all things to all audiences yet it ends up pleasing none. It's too kiddie, too silly, too amused with itself to be a serious comic book movie, but it's also too dark, too serious, and too mature to be a kid-friendly romp. It's two sides divided, tearing the film apart. Next Avengers: Heroes of Tomorrow is perhaps the best idea for a movie in this series of animated films and yet it's also the worst film yet in the series. That's quite an accomplishment but probably not something to brag about.