Just Add More "Nuclear" To It

Today's feature comes from deep in the middle of the 1960s atomic fear. It's a movie that takes a simple idea -- a Frankenstein-like mad doctor attempting brain transplants -- and, for no good reason, add nuclear power to it. it's dumb a stupid and makes no sense which is exactly why the Mystery Science Theater 3000First aired on the independent TV network KTMA, Mystery Science Theater 3000 grew in popularity when it moved to Comedy Central. Spoofing bad movies, the gang on the show watch the flicks and make jokes about them, entertaining its audience with the same kind of shtick many movies watchers provided on their own (just usually not as funny as the MST3K guys could provide). It became an indelible part of the entertainment landscape from there, and lives on today on Netflix. team had to cover it; this is their wheelhouse right here. 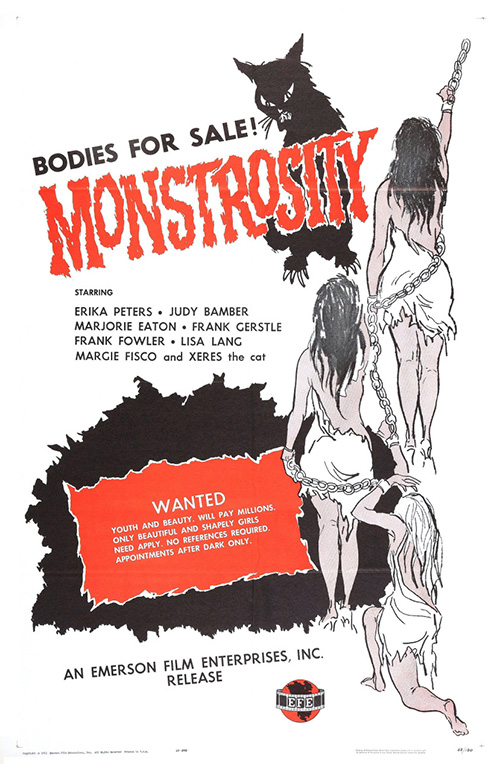 But first, before we get to that, we have to watch a short film and juvenile delinquency. The Atomic Brain is a shorter movie so something had to be done to pad out the time...

Short: What About Juvenile Delinquency?

Jimmy (probably not his name but I'm not going to look it up) is a good kid hanging out with the bad crowd. His friends, a gang of hooligans if ever there was one, like to pull pranks around town and be general nuisances. While Jimmy is off doing something, though, the gang assaults a driver, beating him up bad, before driving off. Jimmy goes to meet the gang at the dinner to hang out, but once he gets home and learns what happened -- that the gang, unknowingly, beat up his father -- he ditches the gang and find the path of the straight and narrow. The gang, though, aren't too happy about that. They tell Jimmy that he has to join their gang again or they'll make him rue the day.

Meanwhile, the town council are aghast at the up-tick in teenage crime in the city (apparently powered by these four hooligans, mind you). They want to put new resolutions into the town charter that would institute strict curfews and harsh penalties. Some of the kids at school think Jimmy should go and talk to the council at their town hall meeting since it was Jimmy's father that was beat up, but the gang wants Jimmy to stay out of it (for some reason). So there's a chase, and everyone ends up at the town hall. The council calls Jimmy to find out what he things should be done. As they ask, "what about juvenile delinquency?" Oh, and then the film ends.

I have to admit, as silly as this how short film seems now -- a group a white-as-snow greasers harassing the white-bread folk on a New England-esque town and calling it "a wave of crime" -- the film itself was actually engaging. When all the kids made a break for the town hall there was legitimate tension for the chase. And then when Jimmy was called up to make the case against new town policies, I was interested to see what happened. The biggest issue with the film is that it ends right when it gets good, but I think that's because it was meant to be a film that introduced a class discussion. The council member turns to the camera, asks for opinions, and then the film ends so the classroom can really talk it out. It's interesting, but does leave us hanging.

Personally I want to see some comedy troupe pull together to film an ending for this movie. It's crying out for someone to give us the conclusion to Jimmy's story. Justice for Jimmy (or whatever his name is).

In comparison to the short film, our main feature is a pretty lackluster affair. In the film a rich of biddy, Mrs. March (Marjorie Eaton), doesn't want to die. Instead, she finds Dr. Frank (Frank Gerstie), a fairly mad scientist interested in finding ways to transplant brains into other bodies. He tries first with dead brains in dead corpses (proof of concept), but the real goal is to take the brain out of Mrs. March and put in a fresh, new, young girl, essentially allowing her to live forever (by moving from body to body every time she wears out an old one.

To that end, three women -- Nina (Erika Peters), Bea (Judy Bamber), and Anita (Lisa Lang) -- are hired by Mrs. March's other associate, Victor (Frank Fowler), to ostensibly act as servants around the elderly woman's house. In reality, though, one of them will become the unwilling guinea pig of the ghastly experiment, the new home for Mrs. March's deranged brain. That is, of course, if the plot goes off without a hitch. Things might not work out as planned, though... 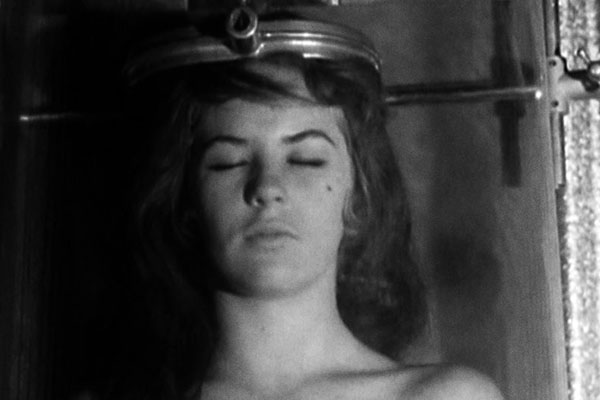 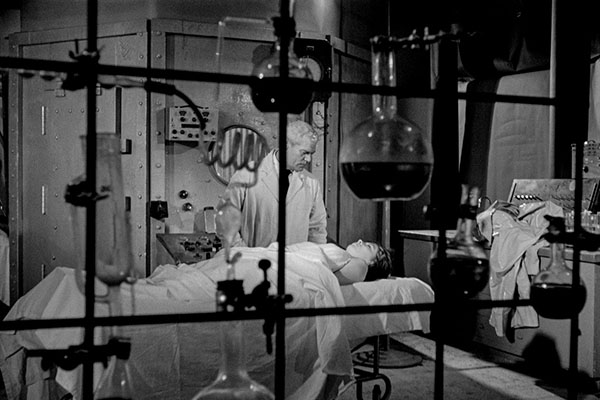 As noted, this film came out in the 1960s when a lot of "nuclear scare" movies were coming out. Everyone was afraid of what the future could hold and so they made nuclear power (and it's devastating effects) the monster of so many films. Even when nuclear power was viewed as a good thing, it was still used by the bad guys to do bad things (such as in This Island Earth). Of course, the Hollywood creators didn't understand what "nuclear" really meant so they just slapped the term on basically everything. "We need a monster? Make it irradiated from nuclear bombs!" (And thus The HulkOnce the brilliant Dr. Bruce Banner had dreams of making the world a better place by building super soldiers to act as a shield for all mankind. Then an accident at his lab bathed him in gamma radiation. Now he has a living nightmare, as a big green guy lives within, just waiting for the rage to take over so he can be free. was born.)

There's a lot that's wrong with The Atomic Brain (the TV version of the film's title, and the one MST3K used; it was originally released as Monstrosity, which makes even less sense given the plot of the film), but certainly the biggest issue with the film is the fact that all it's science is stupid. Dr. Frank (I see what they did there) says he can transplant brains using nuclear power which... how? It's a transplant, so how does the power source specifically influence it. If anything, irradiating a brain would kill it quicker. Then he transplants a dead brain into a dead host and revives it with nuclear power (which, okay, I guess), but it's just a zombie like thing that can walk around and interacting with objects but can't "think" because all the brain function is dead which, also, makes no sense if you know anything about anatomy.

I think my favorite stupid moment in the movie, though, comes near the end (and spoiler for a 50-ish year old movie) when Dr. Frank betrays Mrs. March and implants her brain into the head of her cat. I had to stop the movie right here and try to figure out what the hell Frank did because, I don't know if the Hollywood suits knew this, cats' heads are smaller than humans by a fair bit. That little detail seems to have eluded them, though, and wouldn't you know it, Mrs. March is apparently quite capable of controlling this foreign body instantly. Wow.

Outside of these horrible moments the film offers little else. Honestly, the terrible science (that made me cringe every time) still comprises and the best parts of the film. Everything in and around this is just dull drudgery of actresses that can act going through the motions of a barely-there script while we wait for some other pseudo-science scene (with 200% more nuclear!) to occur. This film is a waste of time.

Thing is the MST3K guys felt this too because they really didn't bring their A-game to this one. This episode is light on comedy (once "What About Juvenile Delinquency?" is over) and they sit around for a dull film just like the rest of us. This film defeated us all.

But now, I have to ask: really, what about juvenile delinquency?