This is Why Clowns Are Bad

Stephen King is hit or miss for me. Back years ago I read through most of the author's catalog (at least everything that was out up to that point) and, for a while, I was obsessed with the novels. I like finding an author and reading everything from them -- once I find an author I want to bury myself in the library, but I also am very picky about the authors I read -- but after a time I grew to dislike his books. At a certain point they all felt the same as far as the actual stories were concerned. Sure, the ideas that started off each novel were cool, but past that point, once King actually had to tell a story, it all felt so blah. 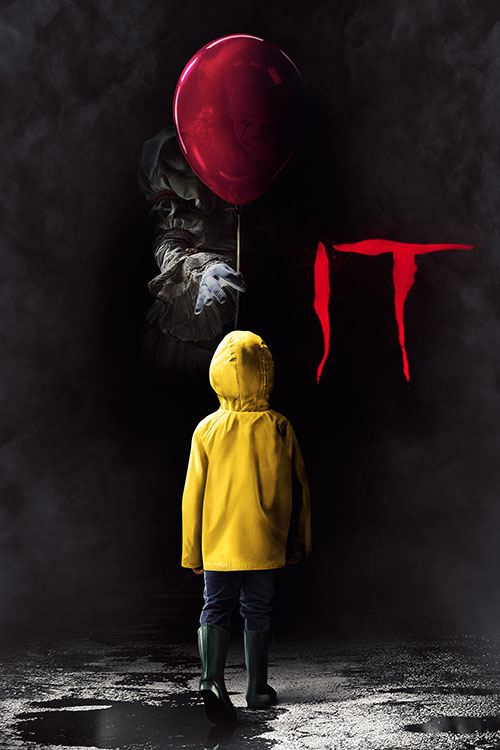 I haven't read King in years but I do still, from time to time, sample the adaptations of his works. The original It mini-series from 1990 was one of the few I skipped, largely because I'd heard it was pretty bad. Everyone raves about Tim Curry in it, but the actual mini-series was, from everyone I talked to, kind of ass. Essentially it's interesting until the evil creature is revealed, and then its just goofy and dumb. A good idea that peters out right when you expect it to get interesting. Thus, I was initially hesitant to watch the 2017 adaptation of the story -- if the original attempt at it wasn't all that great, could the new one do any better? Rave reviews said it was pretty good, but I still held off on seeing It until it was on home video.

I am glad I saw it, though, because at least this first chapter of the movies is pretty darn good. The original book is one of King's longer novels (topped by only a couple of other of his longest works, the unabridged The Stand in particular). Making it into a mini-series original made sense back in the day, but for the movie version the production team instead decided to divide the story along chronological lines. The novel bounces back and forth between two time periods, with the main characters encountering It as children and then 27 years later as adults; the 2017 movie just follows the kids (with the plan to adapt the adult portion of the story as "Chapter 2" later). Just focusing on the kids gives the movie as solid immediacy, the knowledge that we're going to get a single, complete story in one go without being baited into waiting for the second half to get some kind of closure.

Honestly, I think it was the right idea, along with updating the story to set it in the 1980s for the kids and the modern setting for for the sequel. The original novel was set in the 1960s and 1980s, but updating it to more recent decades also allows the movie to play off the 80s nostalgia that's popular right now. Works like Stranger Things have played off the current spate of 1980s nostalgia and, amusingly, the original It mini-series is one of the works held up as inspiring the current trend. Playing into that with the new version makes it feel of-a-piece with the burgeoning genre -- 80s revival horror -- while also saying, "this is the story that inspired it all."

For our first half of the larger story we follow the Losers -- Bill (Jaeden Lieberher), Richie Tozier (Finn Wolfhard), Stanley (Wyatt Oleff), and Eddie (Jack Dylan Grazer) -- as they dodge bullies and make friends with some other outcasts -- Beverly (Sophia Lillis), Ben (Jeremy Ray Taylor), and Mike (Chosen Jacobs) -- and then have to battle a demon that lives in the sewers under their town. At first, of course, they don't realize the evil living underneath them as they enjoy the summer of 1988, but as kids keep disappearing, and the evil starts to spread to the minds of more and more people, the kids quickly clue in to the fact that there's something wrong with the town. A force has returned, every 27 years, to feed on the fear of the town of Derry, and when no one else seems to want to pay attention, it's up to the kids to save the day, no matter what. 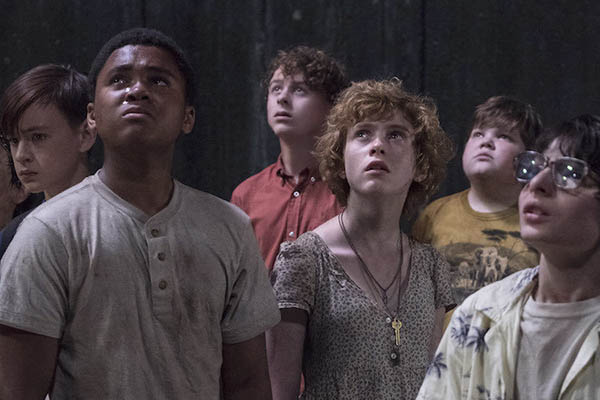 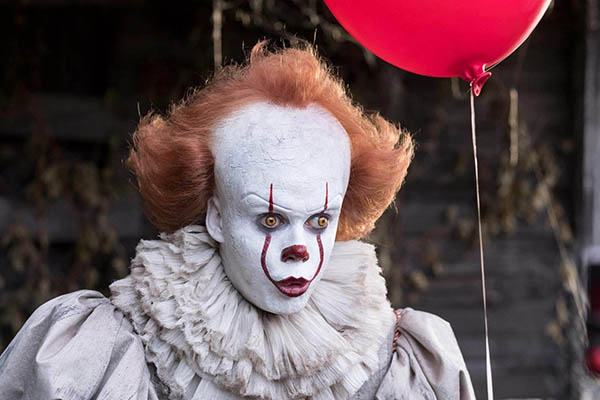 So, yeah, It is a film that neatly fits into that genre of "kids saving the day from evil" that is so popular right now. Many of them, like Goonies and Gremlins came out in the 1980s and, no, are popular because the kids that watched the films then are adults now, trying to get their kids into the works as well. Other works, like the aforementioned Stranger Things play up that same genre, leaning hard into the weirdness and the mysteries to draw a connection to what came before. The new It does both -- it's a remake of a mini-series that hit right at the end of the decade everyone loves so much now, a movie that neat ties into the stories of kids saving the day, and it have a deep love the the 1980s in the process. It's maybe not quite as in love with the 1980s as Stranger Things is, but it's not far off, either.

What helps the film is that it's a really tight, focused story. Looking only at the kids means we don't have any superfluous story, no filler to lead into the back half of the tale (when the adults fight It again 27 years later). Sure, fans of the story know we'll get a second part, but nothing about this movie seems automatically set up to have a sequel -- just in case this first film had bombed, the movie was setup to be standalone and complete within itself. It's smart, allowing viewers to get a solid, well written story with a seemingly happy ending, with only the barest of question marks raised by the last scene when all the kids say, "if It comes back, we'll be here to fight him." So much better than dragging a single story out over four-plus hours.

It also helps that the film is really well acted. Child actors can be pretty spotty, with many of them losing their performances part way in, or wavering between their characters and themselves. This cast, though, is uniformly great, never falling out of character and always making us feel the fear their characters are feeling. Of course, a couple of these kids will be familiar faces, especially among the family-movie genres sect. Finn Wolfhard also appears in Stranger Things, drawing a direct connection between these two semi-related works, while Jack Dylan Grazer was the co-lead in Shazam!. That's not to undersell the rest of the cast -- in particular I really enjoyed the performances of Lieberher as Bill and Lillis as Beverly -- just that fans of recent genre movies will have a couple of actors they know and probably enjoy.

Then there's the monster of the piece, Pennywise the Dancing Clown (aka It). Played by Bill Skarsgard, Pennywise is a nasty beast, creepy and awful and otherworldly. While the special effects and CGI enhancements help make It so creepy, the real power of the creature comes from Skarsgard. I've seen this actor before, such as in the weird and rather awful NetflixOriginally started as a disc-by-mail service, Netflix has grown to be one of the largest media companies in the world (and one of the most valued internet companies as well). With a constant slate of new internet streaming-based programming that updates all the time, Netflix has redefined what it means to watch TV and films (as well as how to do it). series Hemlock Grove he was strange an off-putting there, when all he had to do was basically play a human (or human-ish), but here he gets to really be weird and, man, does the actor revel in it. I know everyone raves about Tim Curry, but I have a feeling the Skarsgard has given us the definitive Pennywise. 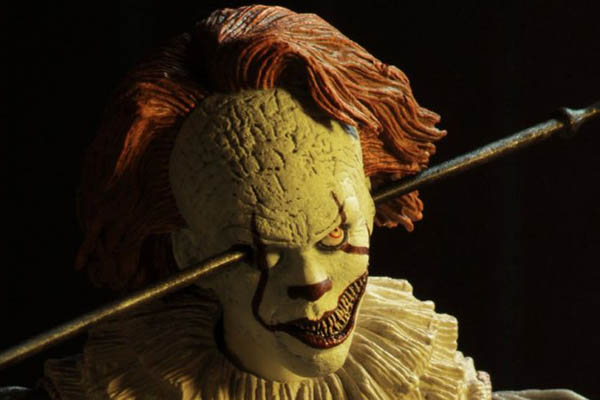 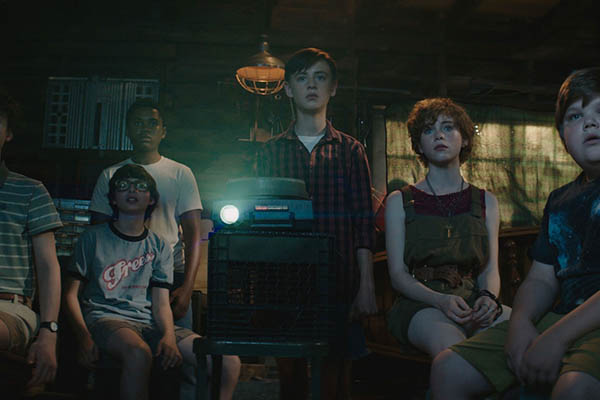 If I have any qualm with the film its that the climax of the movie really isn't all that climactic. Pennywise is as his most scary and creepy when he's barely seen, half-hidden in the sewers and using his powers of deception and illusion to scare the living daylights out of people. He's a force, and effect, but he works best in the shadows. The final act of the movie, those, sees the kids confront Pennywise deep in the sewers, on the clown's home turf, and that's when the monster has to be revealed, when he has to be out of the shadows and on screen all the time. It's here where the monster loses his luster and stops being so scary, and the film falters because of it. The film is least interesting in its last act, and that holds the film back from being truly amazing.

All the same, It is a great movie. For a solid two hours is thrills and scares with gleeful abandon. While it might falter right at the end, it's more of a stumble than a full face-plant. It could have been better, but it also could have been much, much worse. It might lose a little bit of energy, but the actors keep it from becoming a complete disaster. I've watched the film a couple of times now and I enjoyed it both times. It's worth it for most of the movie, and it keeps you just invested enough that, come the sequel (which, as of the time of this writing, just released), you'll probably want to see what happens when the evil, dancing clown comes back 27 years later.