New In Town and Looking for a Scrap

When last we checked in with the ladies of GLOW they'd just had their TV show get canceled only for their act to get picked up by a Las Vegas casino. The show promised a big shake up -- new town, new event, new reality for the ladies -- and the only question was how the NetflixOriginally started as a disc-by-mail service, Netflix has grown to be one of the largest media companies in the world (and one of the most valued internet companies as well). With a constant slate of new internet streaming-based programming that updates all the time, Netflix has redefined what it means to watch TV and films (as well as how to do it). series would adapt to this new setting to push the characters further. Would a shakeup like this be good for the show, or would it be one step too far? 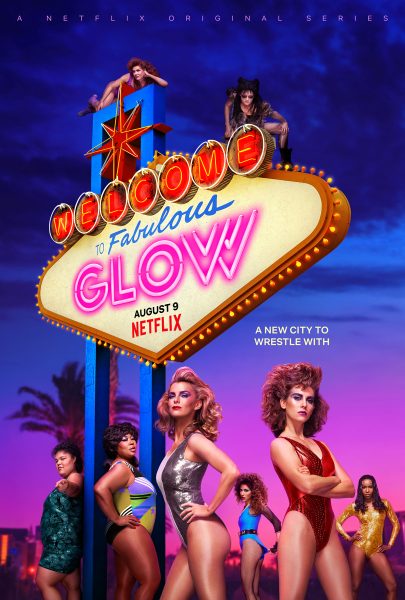 That's not pessimism, just realism. Most of the time when shows decide to go for a big shake up, changing something major just to see what happens, it's usually because the show is flailing around. Plenty of shows in the past have ditched major characters, started new settings, or creates some drastic status quo to paper over holes in their long term health of the series, so it's fair to wonder what the goal was with a move like sending GLOW to Vegas. However, it's nice to be able to report that the change in locale and the new situations that come from it feel organic to the whole series. The show uses the new setting to expand its focus the right way, broadening the depth of the series as it forced each of the characters to find new things that made them happy.

The biggest change to the series, really, isn't the move to Vegas (although it does establish new sets and a new reality, of course). No, the biggest change is that Ruth (aka Zoya the Destroya when she's in the ring, played by Alison Brie) isn't really the main character anymore. Previous seasons used Ruth as someone for us to focus on, a women trying to make it in show business despite being struck down again and again. While we learned about the other ladies in the Gorgeous Ladies of Wrestling (the show within the show), Ruth was always the character we fell back on. She's still a major through-line for the series, but just as much time is spent this season on Debbie (aka Liberty Belle, played by Betty Gilpin) and Rhonda (aka Britannica, played by Kate Nash). Each of these ladies have their own stories to work through, season-long plots to deal with.

Debbie, for starters, is trying to balance her work and personal lives. For the first half of the season she's flying back and forth every weekend between Vegas and L.A. so she can see her kid while still acting as a producer on the Vegas show. Eventually she decides to bring her kid over to Vegas and then, in the process, also meets a nice gentleman (who she calls "Tex", played by Toby Huss) that she forms a serious connection with. The problem for Debbie is that just being a producer on one show isn't enough, not only because she's never sure if G.L.O.W. will last another year but also because she has big dreams for her career. She wants to be a power player in Hollywood and, as we see by season's end, she'll get pretty cutthroat to get what she wants.

Rhonda wasn't a major character in seasons past. British and cute, she basically was a bit of a manic girl that would hang out in the backgrounds of a lot of scenes and occasionally be funny or silly. That changed though at the end of last season when her immigration status expired and she either had to get married (for a Green Card) or get deported. So she married the G.L.O.W. producer Bash (Chris Lowell) and while it was a mercenary play at the start, over the course of season three she really grew to love him. Bash, though, is very deeply closeted and doesn't really know what he wants. He says he's in love with Rhonda but, deep down, we can all tell there's a lot more lie than truth to that statement. So Rhonda is on a path to try and figure out what she truly wants from her life. 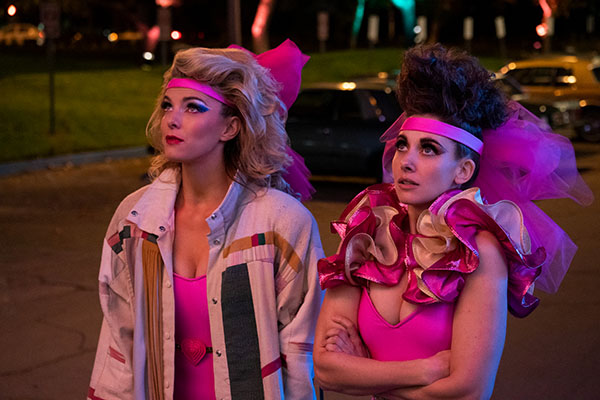 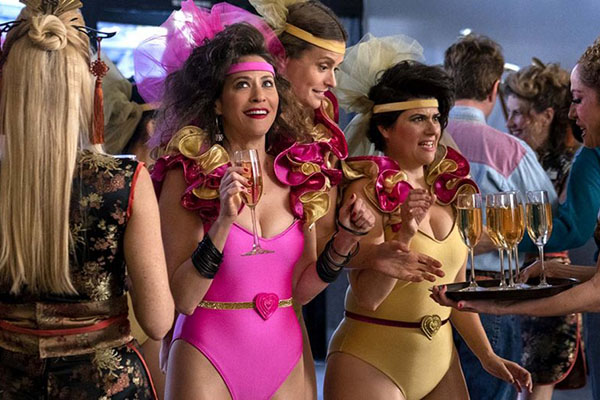 Ruth, really, has the least interesting storyline. Over the last two seasons she was motivated by two goals: one, rekindle her friendship with Debbie after she was caught screwing Debbie's husband and, two, find a way to make it in Hollywood. By the end of the season season she's already become best friends with Debbie once again (largely because Debbie realized her ex-husband was a tool and she didn't really need him at all), but for most of the third season Ruth was pining for a career she never could get off the ground and, over the course of the season, she continues to fail to make it at all. It's sad because we do see that's she's great in G.L.O.W. as Zoya, but those aren't the kinds of roles Hollywood is casting for. So she continues to struggle, stuck at the end of the season right where she was at the beginning of the season.

The rest of Ruth's story is defined not by her own actions by but the men in her life, a weird place for such a feminist show to be with one of its main characters. Ruth has one boyfriend, Russell (Victor Quinaz), who works as a cameraman in L.A. The long distance relationship is hard for them but the distance actually makes it easier for the two of them to ignore the fact that their relationship is ending. Meanwhile there's Sam (Marc Maron), the weirdo director of the TV G.L.O.W. who came with the ladies to Vegas but doesn't really have much to do with the series anymore. Ruth is obviously in love with Sam and Sam knows it, pretty much spelling it out for Ruth in an early episode this season. He wants her, he knows she wants him, but for whatever reason she's resistant so, after a single conversation on the topic they both drop it and then, eventually, Sam moves back to L.A. to help his daughter sell a script she wrote.

Part of the problem is that while Ruth is stuck in molasses, unable to move herself forward in any direction -- not her career or her personal life -- Sam is actually push himself along. He writes a script, but then his daughter shows up with an even better script and he realizes her script is the one to sell. So he puts her needs above his own, goes out to help her in Hollywood, and essentially becomes the kind of person the daughter needs in her life. Its growth, it's movement, it's everything Sam needs. All Ruth has, though, is a will she/won't she with Sam, defining herself by her relationship to him.

And let's not ignore the fact that Sam is at least twice Ruth's age. Brie is twenty years younger than Maron, an obvious age difference even the show has to call out... only to then brush it aside because, for whatever reason, these two are "meant for each other". It's problematic, though, as Hollywood has a tendency to cast much older men with younger women (but not the other way around) making it seem like the only relationships that are "good" are older men/younger women pairings. It's a weird angle that this show, which normally so good at presenting healthy, feminist perspectives, stumbles right into. And don't get me wrong, Brie and Maron have solid chemistry but that doesn't cover for the fact that their pairing seems a tad... gross. 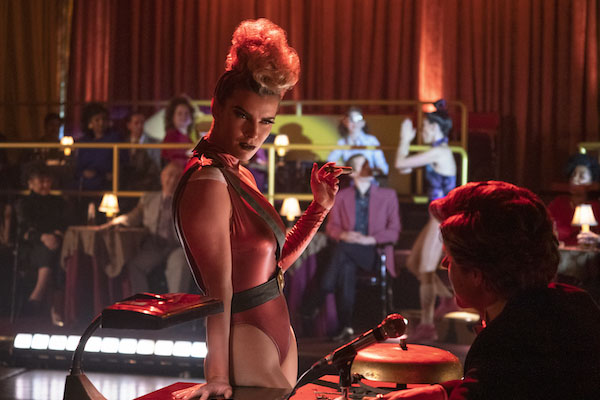 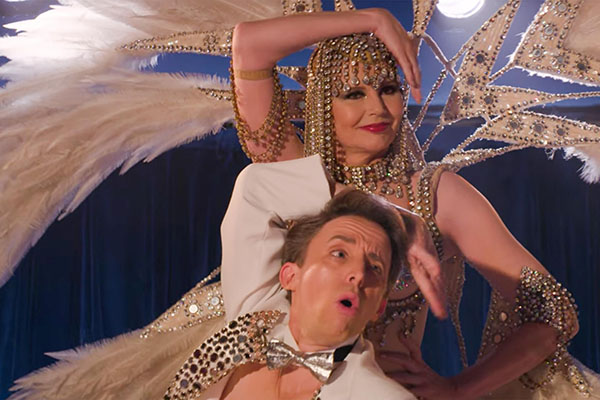 It's just odd that the show struggles here because in so many other areas it does a great job of presenting characters and situations in a solid, healthy light. The girls make friends with Bobby Barnes, the drag queen with his own show at the Casino Hotel complex. They accept him for who he is, regularly attend his show, help him with his annual AIDS benefit, the Libertine Ball, and commiserate with him when homophobic assholes ruin the event. Bobby gets to be a real person and the show treats him kindly while also using him to help the other characters find their own paths their through their sexuality (as more than one character struggles with whether they're gay or straight).

Then there's Sandy Devereaux St. Clair, played by the fantastic Geena Davis. Sandy was a showgirl dancer before she, of course, became too old to maintain that lifestyle. So she took over the casino and has been running the place solidly ever since. Sandy gets a lot of great moments (including one number in a rather revealing showgirl outfit) and the show never treats her like an "icky older woman." Again, the show tries to treat her character fairly, an aging woman given the respect she's due.

By the end of the season the characters are all heading off for a winter break before coming back to Vegas for another year of the show. Some new developments also happen to be in the works (motivated by Debbie) that could spell a new status quo for the series (again) moving forward. And just about all of it is great. Unfortunately, Ruth is the one character still stuck in the mud. The show spends a lot of time getting all the other characters to mature and find themselves (Bash and Sam included), but Ruth is still in basically the same spot now she was at the start of the series. If another season of GLOW happens (and knowing Netflix and their love of killing shows after three seasons, its entirely possible this might be it for the series) the show needs to find a way to give Ruth something new to do, some new direction for her life. She's the character we started with and, at this point, she's the one the series has left behind.