The Quick and the Dead

Sam Raimi has a particular directorial style. Known back in the 1990s for the Evil Dead films, it might seem easy to dismiss the director as just another genre nerd, what with his "splatstick" horror films and his superhero movies (of which, in fairness, he has directed five in his career), the director has a much larger filmography than many might realize, and there are some very different movies than one might expect on that list. Despite that, they all do feel very Raimi, through and through. 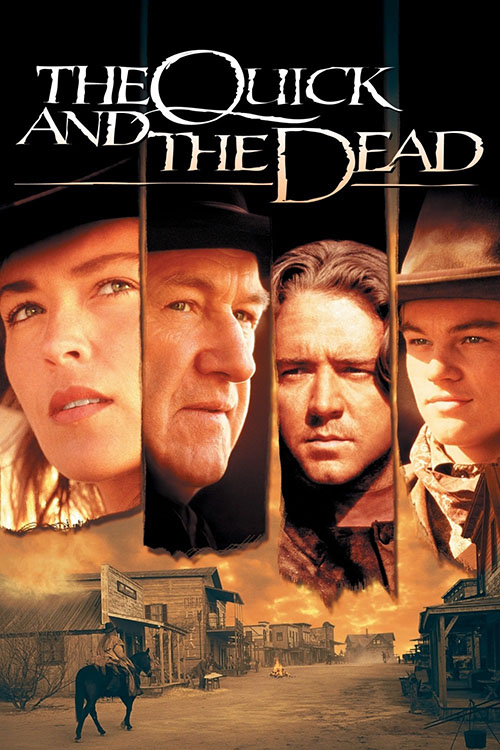 Perhaps the oddest addition to his oeuvre would be The Quick and the Dead. Having not directed a Western before (although he'd had his fair share of period pieces, both on film and TV), one might wonder just what the director of The Evil Dead would bring to a story of law and order in the Wild West. And yet, watching the movie you'll find a film that manages to marry Raimi's directorial instincts with a tale of revenge, justice, and a whole lot of shooting. Really, from the right angle this feels exactly like a Sam Raimi film.

The movie opens with "The Lady" (Sharon Stone) riding into the town of Redemption. Ruled over by ruthless outlaw John Herod (Gene Hackman), Redemption is desperately in need of someone to take him out. Unfortunately for the denizens of the town, Herod is not only one of the best gunfighters in the West but he also has a cadre of loyal men working for him, always watching his back. The only way to kill him is to do it right to his face in the annual gunfight competition he puts on each year. If you can make it to the end of the competition you might just be able to knock the king off his throne.

Thus, over the course of a single day, we have sixteen people sign up for the shooting spectacular. From the Lady, to the Kid (Leonardo DiCaprio ), Ace (Lance Henriksen), Scars (Mark Boone Junior), and more, all the wildest western tropes come to show they have what it takes for the $100K on offer in the contest. Herod even drags in his old partner, Cort (Russell Crowe), forcing the one-time outlaw (turned reformed man and preacher) to fight in the show. One fight per day for each pair of shooters, with the winner moving in while the loser, well, they die. It's the quick and the dead, and there might not be anyone fast enough to make Herod eat a bullet.

Going back and watching this film (the third time I've seen it) I noticed the way the movie setup its story, or, really, the lack there of. Most of the details about the tale are only told in passing, given out as breadcrumbs along the way, without a huge info dump at any one point to really inform us of what's going on. It's just a lady, a gun-woman come to town, right as the violence erupts. The movie expects you to keep up as it sets its colorful cast and starts the shooting, and that honestly works to its advantage. 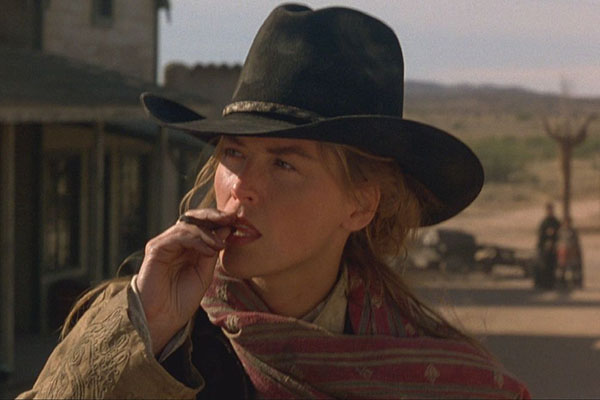 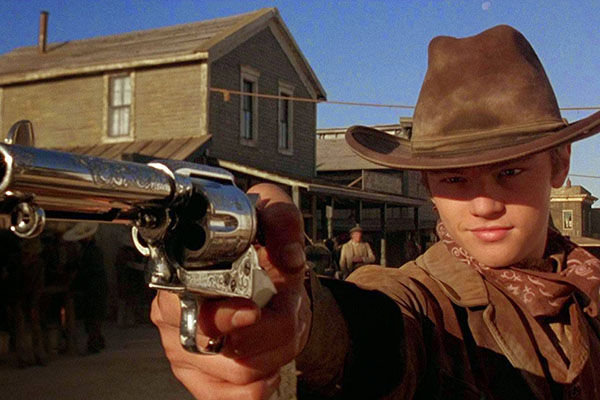 A lot of the draw of the film is figuring out what's really going on. What motivates all these people? Who are they? Do they have some connection to the town or to Herod? Some of them state their cases, like the Kid (who is really Herod's son, or at least so he thinks) and the Preacher, but for most of them we only learn the little bits of story we need when we need it and never before. The film keeps you guessing, working it all out for yourself while the action continues onwards. It's really masterfully done.

Let's also not ignore the fact that this is a female-led film in a genre that so rarely sees female heroes. Sharon Stone fought hard to make the film the way she thought it needed to be made, threatening to walk from the project if Raimi wasn't the director (he was her first choice, based on Army of Darkness), actively fighting for the casting of Russel Crowe (an unknown at the time), and even paying DiCaprio's salary out of her own pocket because she felt he was the right kid to play The Kid. The was a passion project for her, and the film certainly feels like it was made with a lot of love.

Aiding matters, of course, is the action itself. Solo gunfights don't sound that action packed -- too men facing each other and then they shoot, over and over -- but the film makes it work. In part that's because it plays up the tension of the gunfights, the moments when both shooters are waiting, and then when the clock strikes and the guns are drawn. Each set piece keeps you engaged, waiting to see how everything is going to play out. Rarely does the movie set its cards down early, showing you who will win in a fight, so you're almost never sure who really will be the better gunfighter from one scene to the next.

That's as much a credit to writer Simon Moore and director Sam Raimi as it is to the cast. All the actors are in character, really helping you invest in the story, the action, and everything going on in the film. Of course, with a cast this stacked, from Stone to Crowe, Hackman and DiCaprio, plus a bevvy of characters actors to boot, it's hard to find a bad actor in this whole thing. Naturally you can't keep Crowe away from a period piece (he has to drive by the studio every day, asking, "is there a period piece going on?") but I think the real credit goes to Stone here. She was known as a femme fatale in the 1990s but, despite the Lady being against type for her, she works so well in the part. She makes the movie. 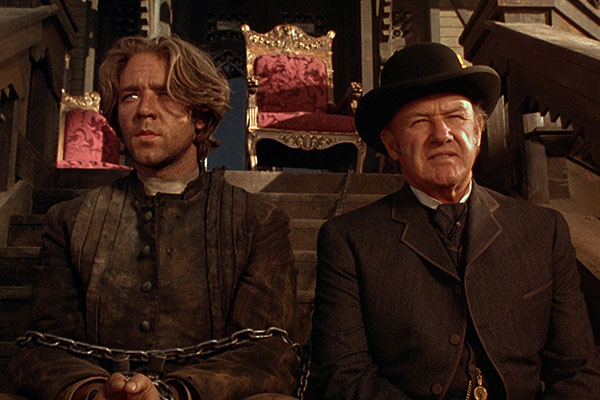 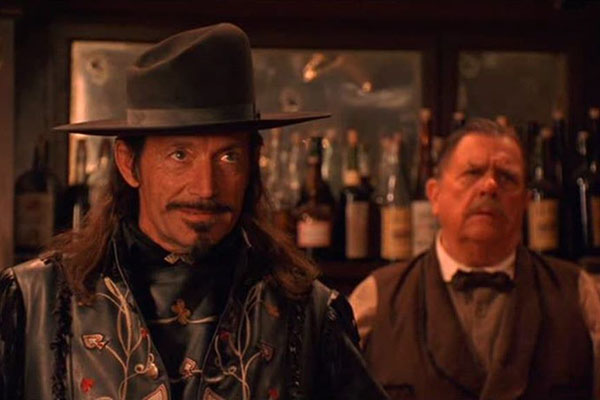 Through it all, though, is Raimi's directorial touch. He has a way of setup up scenes, that style of shot-and-sound effect, of canted angles to draw you in, of weird affectations that are both really fake and yet so charming you don't care. Raimi came to the Western genre and instead of just phoning in a Western he made the movie his own. This is the movie, really, that shows the kind of depth he could bring, the eye he had for every film he could make. He might have been comfortable in genre work, playing in gooey body-horror, but he kills it with the Western genre this time around.

The movie wasn't a huge success when it came out, making a lackluster $47 Mil against a $35 Mil budget, but it's gained a solid reputation in the years since. Thought to be too strange and too weird back in the mid-1990s, many have realized that it'd oddball touches, the weirdness that Raimi brings to all his films, actually works as its greatest strength. It's a Western quite unlike any other you'll watch, but engaging from start to finish. The Quick and the Dead is a fast and lively action movie that showcases its stars and directors in ways you might not expect, but in doing so it creates a film you won't likely forget.