It's a Family Thing

As I noted in my review of the previous Hitman film, I don't really know the mythology of the characters or the world. I don't know how obsessed with the creation of these "hitmen" the games are, or if they spend a lot of time digging into the deep storytelling to justify its world. For all I know the games could have as long and convoluted of a mythology of, say, Assassins Creed or all the works surrounding Final Fantasy VII (god, that game in incomprehensible). Maybe there's more to it than a bald dude that kills people. 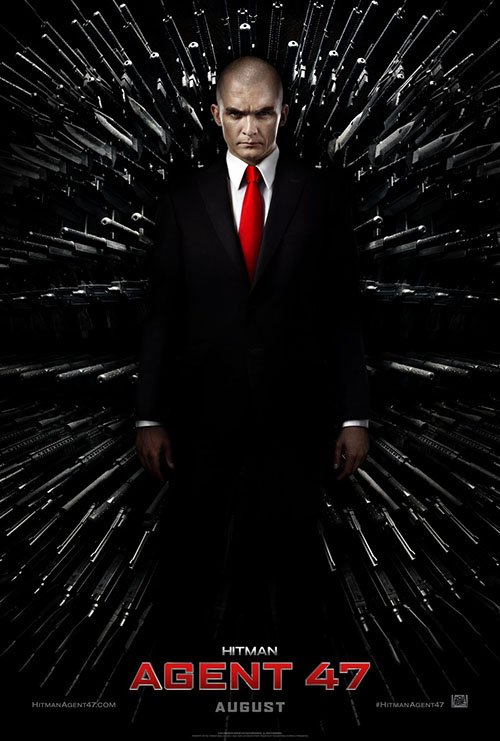 As such, I don't really feel like it's fair for me to judge how much mythology is crammed into the new film, Hitman: Agent 47. A reboot after the only marginal success of the 2007 film, this movie goes all in on the background of the world, diving deeper into how the agents were created, the family behind the creation of the Hitman project, and so much more. I don't know if its accurate or not. The issue I have with it is that I don't care: I spent the hour-and-a-half watching this film and by the end of it I didn't feel like I have a better understanding or a desire to learn more. The film buys all in on its mythology and, accurate or not, it still sucks.

The movie introduces us to Katia van Dees (Hannah Ware), a woman who had been on the run for most of her life, chasing a man she barely remembers but who she very much wants to find. Her search has dropped her in Germany as she continues to collect clues for this man, Dr. Piotr Aaronovich Litvenko (Ciaran Hinds), who is eventually revealed to be the mastermind of the Hitman project. As we soon learn, Katia is Litvenko's daughter, and her desire to get back to him is deeply rooted in her need for family.

All this is revealed with a man, John Smith (Zachary Quinto), shows up and tells Katia that she has to run, let him protect her, because an agent is after her. This agent, 47 (Rupert Friend), supposedly wants to kill her. In reality, though, Smith wants the knowledge Katia has so he can capture Litvenko and bring the scientist back to his boss, Antoine Le Clerq (Thomas Kretschmann), a billionaire that wants to restart the Hitman project so he can build his own, personal army. 47 wants to protect Katia and prevent the project from ever coming back, whatever the cost.

As I said, this film goes all-in on mythology. Where the original film just hinted at the Hitman program, showing a montage of kids being trained from a young age to be cold-blooded killers before picking up a mission and just letting us fill in the blanks ourselves, this movie delves deep to the point of obsession. The agents aren't just trained, their grown. The agents are just practiced and skills but essentially are gene-spliced to effectively have super-powers. It's not good enough to have a trained assassin, he has to have a mission to save the world. 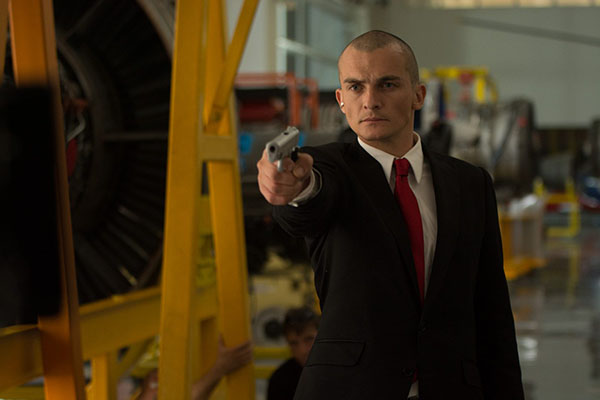 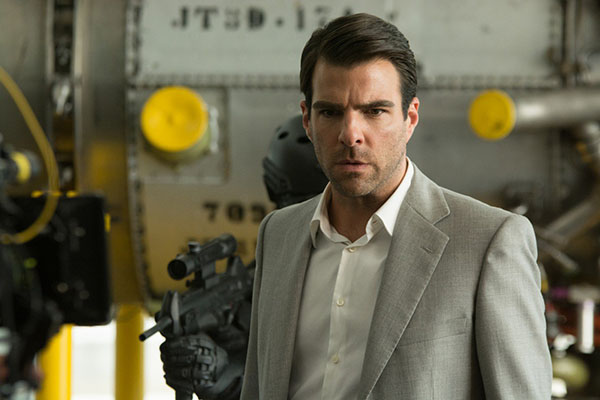 I guess I can kind of see what the producers were thinking, and it all relates to Hollywood trends. The first film felt like it was trying to be a clone of one of the Bourne Identity films, taking the basic concept of the Hitman games and applying it to a Eurotrash espionage template. That movie felt like Bourne, from the look to the locations to the rip-off music playing behind. It was clear what the producers wanted because those movies were the action films that were leading Hollywood at the time.

Eight years later, though, we're now in the land of superheroes, headed up by the Marvel Cinematic UniverseWhen it first began in 2008 with a little film called Iron Man no one suspected the empire that would follow. Superhero movies in the past, especially those not featuring either Batman or Superman, were usually terrible. And yet, Iron Man would lead to a long series of successful films, launching the most successful cinema brand in history: the Marvel Cinematic Universe.. Now we can't just have assassins and spy-shit, now everyone has to be a superhero, everything has to be a mission to save the world. That's why Agent 47 and (as its eventually revealed) Katia are revealed to be genetically engineered super-soldiers. It wasn't enough for them to just be trained, they have to literally be made to be special. It's really kind of stupid, once you sit and think about it.

Of course, if they're engineered then their enemies have to be created as well. John Smith (a character I have to assume was created for this movie) is a guy who willing let himself be experimented upon, with liquid metal injected under his skin to make him bullet-proof. Try not to think too hard on that as it's incredibly dumb, and also feels like it was ripped right out of X-MenLaunched in 1963 and written by Stan Lee and Jack Kirby, the X-Men featured heroes distinctly different from those featured in the pages of DC Comics. Mutants who didn't ask for their powers (and very often didn't want them), these heroes, who constantly fought against humans who didn't want "muties" around, served as metaphors for oppression and racism. Their powerful stories would form this group into one of the most recognizable superhero teams in comics (and a successful series of movies as well). (just without the super-powers to make it seem plausible). If you're going to have agents as the heroes, you have to have agent-like people as the villains, too, right?

Issue I have with that (among all the issues I have with this film) is that we've seen this kind of dynamic before. The MCU if rife with films where the hero has to face off against a villainous version of themselves: Iron Man with Ironmonger, The Incredible Hulk with Abomination, Black Panther with Killmonger, and so many more. It's a trope of the superhero genre at this point, and this film doesn't really add anything new to the concept or make it any more fresh or interesting. 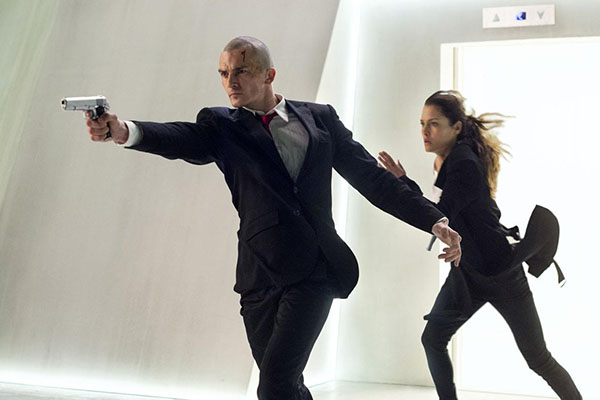 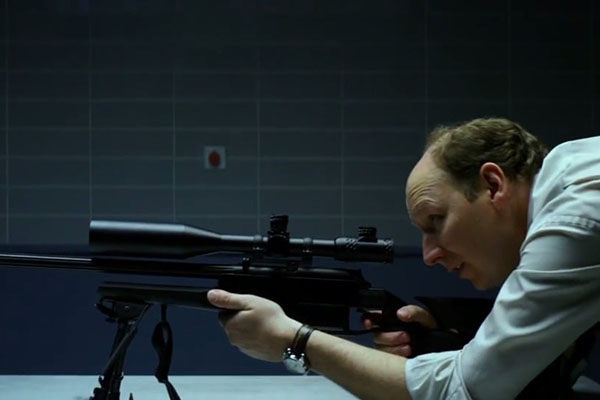 That's not to say nothing about this film works. I do actually like both the leads who do as much as they can with what they're given. Friend and Ware have an interesting dynamic, a kind of trainer/trainee vibe that evolves eventually into a brother/sister relationship (a quite literal one at that). The lack of a romantic angle between them at least lets this film stand apart from the previous one (as sexless as that was), and it also allows both of these "agents" to develop proper personalities (unlike poor Timothy Olyphant who as wasted in the previous film).

And it is a very handsomely made movie. It's stylish looking, with a good directorial eye and clearly a fairly solid amount of money spent on making it look pretty. The action is good, and while its still pretty choppy (to cover for actors that aren't also stunt men), it's at least legible enough that you can follow along. It's no worse than any of the action coming out of the MCU, although I do feel like I would have preferred better action instead of a reliance on superhero tropes to carry the film.

All that being said, this film is incredibly stupid. It has a plot that sits just this side of incomprehensible, with a villain (and his flunky) that's stupid to be in the position of power he wields. The heroes are fine, if not spectacular, and in the end everything amounts to very little. I don't know if this was supposed to be a franchise starter, although I suspect it was, but that clearly never came about. Audiences seems to care for this film about as much as I did, and after debuting it faded away to be largely forgotten.

I'm not a fan of the games as I've never played them. That said, I do feel bad for the actual fans: they've had to sit through two films that failed, both times, to capture the magic of the bald assassin. I have to wonder if they'd even bother turning up for a third attempt...