The THAAAAAAAAAANG from the Swamp

The DC Universe streaming service admittedly seemed like a pretty strange prospect when it was first announced. It's a streaming app focused on the U.S. that provides not only new TV shows and movies but also a back catalogue of old hits (and misses) as well, plus a deep collection of digital comics to read. The draw for fans would be that it's a one-stop shop for all things DC ComicsOne of the two biggest comic publishing companies in the world (and, depending on what big events are going on, the number one company), DC Comics is the home of Superman, Batman, Wonder Woman, and just about every big superhero introduced in the 1930s and 1940s., but for people that didn't read comics the new shows would be the focus. 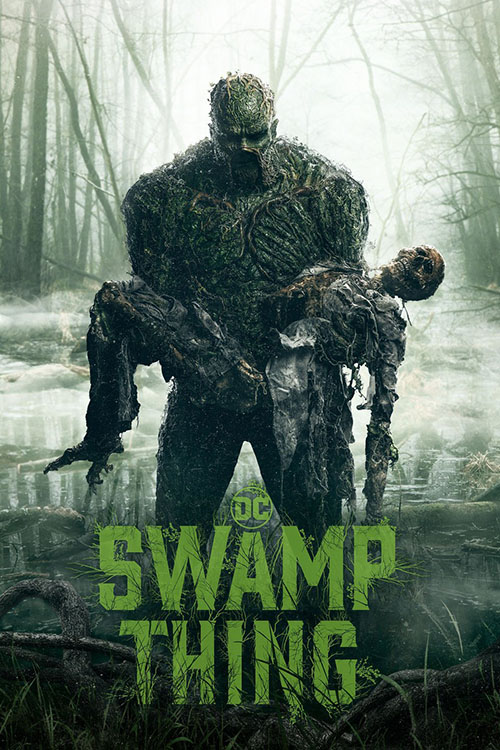 And, honestly, the new shows weren't bad at all. I've gone on at some length about both Titans and Doom Patrol (both of which I discussed, week by week, in my ArrowverseWhen it was announced that the CW was creating a show based on the Green Arrow, people laughed. The CW? Really? Was it going to be teen-oriented like everything else on the network and be called "Arrow High"? And yet that one show, Arrow has spawned three spin-offs, various related shows and given DC a successful shared universe, the Arrowverse on TV and streaming. reviews), and there's an expansive slate of show that are coming out over the next couple of years (and not just new seasons for those two shows). Now, sure, the argument can be made that DC doesn't need it's own streaming service -- NetflixOriginally started as a disc-by-mail service, Netflix has grown to be one of the largest media companies in the world (and one of the most valued internet companies as well). With a constant slate of new internet streaming-based programming that updates all the time, Netflix has redefined what it means to watch TV and films (as well as how to do it). is a fine host for this kind of original content, and outside the U.S. they actually are the host for Titans, and that service also currently has the rights to all the Arrowverse shows. One more service seems silly... but then that's a whole other argument that could bee made as well.

Whatever your feelings on the matter of different streaming services, it is the case regardless that DC not only has their shows in a lot of different locations but they also run a huge number of diverse universes. While Marvel has basically gone all in at this point on the Marvel Cinematic UniverseWhen it first began in 2008 with a little film called Iron Man no one suspected the empire that would follow. Superhero movies in the past, especially those not featuring either Batman or Superman, were usually terrible. And yet, Iron Man would lead to a long series of successful films, launching the most successful cinema brand in history: the Marvel Cinematic Universe. (one universe, tightly controlled), DC has been willing to let pocket universes build up, so that we get not only the Arrowverse but also the DC Animated Movie UniverseWhile DC Comics was amping up production on this big "MCU-killer", the DC Extended Universe they were also quietly putting together another shared movie continuity, the DC Animated Movie Universe. This series was more closely related to the comics, directly adapting a number of famous storylines to, arguably, better effect than the live-action movies could. and the DC Extended UniverseStarted as DC Comics' answer to the MCU, the early films in the franchise stumbled out of the gates, often mired in grim-dark storytelling and the rushed need to get this franchise started. Eventually, though, the films began to even out, becoming better as they went along. Still, this franchise has a long way to go before it's true completion for Marvel's universe. plus the DC Universe shows (and, next year as part of Crisis on Infinite Earths, many of these universes will be crossing over). DC has been willing to put all this out there, to experiment and see what works, and then smash it together just for the hell of it.

Sadly, one show that won't be joining the ranks of the big DC Crossworlds Extravaganza is the 2019 edition of Swamp Thing. The third attempt at bringing the big green man to screens, after the 1982 film and its sequel and then a 1993 live action series, this new series attempted to create a version of the protector of the Green that could eventually tie into Titans and Doom Patrol. However, early into its production the series order was reduced from thirteen to ten episodes, and then the second the first episode premiered on DC Universe, the show was canceled. Sources claimed management hated the tone of the series and didn't see the need to support it. Knowing the show was canceled. before it essentially even aired, I held off on watching the show until I could binge it all at once, and easier way to enjoy a show when I don't have to support its ratings week to week.

Having now gone through the show I will admit that I can kind of understand why the powers that be at DC decided to let this one go. Sure, a show about the Swamp Thing, a C-list character at the best of times, was going to be a hard sell for viewers no matter what -- it's a dude made of weeds that hangs out in a swamp. The show tries to compensate for this by strike a tone somewhere between body-horror and psychological terror, working the ambiance of the show as hard as it could. But the fact is that the producers really didn't know how to make a version of the character that was interesting and the ten episodes, while full of big ideas, plod along before eventually just petering out. 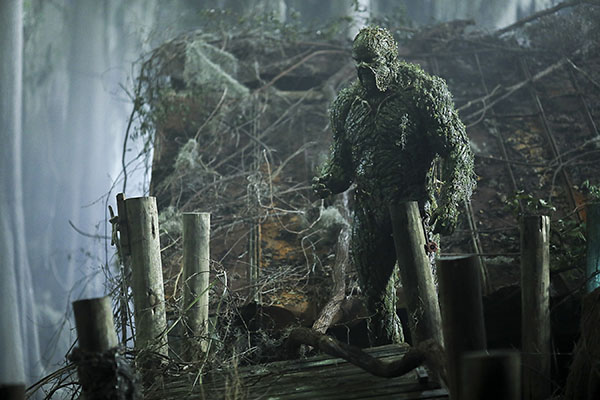 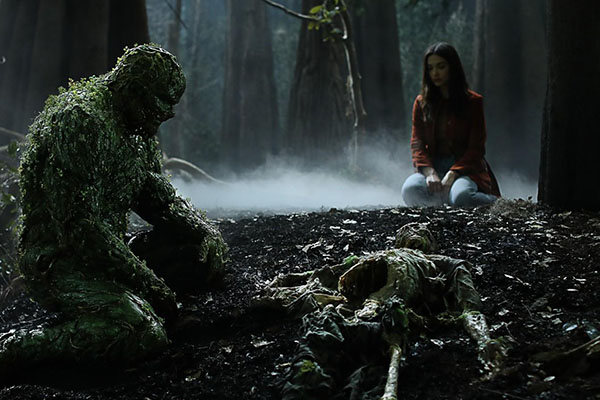 In Swamp Thing, we're first introduced to Abby Arcane (Crystal Reed), a CDC doctor sent back to her hometown of Marias, Louisiana, to deal with a mysterious epidemic. People are getting sick with what appears to be some kind of plant-based illness. She soon teams up with Alec Holland (Andy Bean), a swamp researcher who thinks there's something hinky going on in the bayou. Unfortunately for Alec, though, someone shoots him out in the swamp one night. Unfortunately for the killer, and every other evil doer in town, Alec's corpse finds the problem with the swamp: a pollutant that's causing the plants to overreact and mutate, and when they come into contact with Alec's body, the pollutants transform him into the Swamp Thing (Derek Mears). Now the protector of the Green will be coming for everyone that looks to pollute the water, and he'll take whatever force he deems necessary.

There's actually a lot set up in the first season of the show. There's the illness, of course, which is sort of tied to the Swamp Thing but also to a different force in the swamp, something our hero calls "the Black". The Black is supposed to be the big threat of the series, but we barely get any time to focus on it. Meanwhile there's Avery Sunderland (Will Patton) a local businessman who has been authorizing the dumping of the green wastes into the swamp just to see what would happen. The doctor he's working with, Jason Woodrue (Kevin Durand), thinks they can use the mutated plants to cure all diseases, and they take the existence of the Swamp Thing as their proof. Eventually Woodrue even mutates himself, soon to become the Fluronic Man (a major villain of the Thing)... but this, too, doesn't happen before the show is canceled.

It's the big problem with the series, really: so much is set up but none of it really comes to fruition in the first ten episodes. Over the course we get weird plagues, evil insects, blue demons, poltergeists, and all kinds of other seeming threats, but none of them ever get explained and none of them actually are a threat worthy of the Swamp Thing. Even when the hero gets captured and almost killed, he very quickly heals back up with the power of sunlight. The show lacked any kind of real threat or major villain that could stand up to the Swamp Thing, and then it ends before it could get maybe its one true villain into play.

I really wanted to link Swamp Thing. Certainly it tries. The special effects are all pretty great, with a lot of practical effects (like the Swamp Thing himself, done as a rubber suit and not CGI), supplemented with the right amount of computer effects. Care was put into the creature effects, looking properly gross and tactile. And Mears is able to give a convincing performance underneath all that makeup. 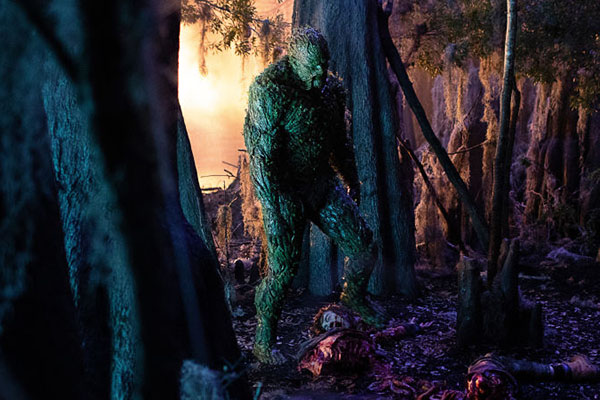 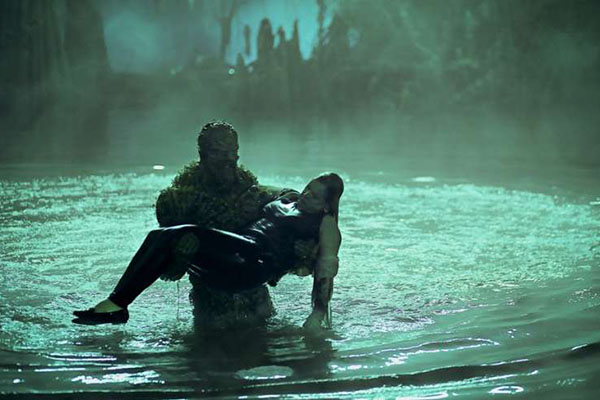 Then there's Reed and Bean who both provide solid performances in the series. Abby is our way into the show, the closest we get to a true protagonist as she's there to, one, stop the disease (which, by the by, never gets solved) and, two, help Alec in whatever form he may be in. Meanwhile, Bean is great in the human form of the Swamp Thing (seen before he transforms and for a few short scenes after), a charismatic lead who has great chemistry with Reed. These two are a solid team and much of the show works when they're on screen.

The unfortunately fact, though, is there's just not enough going on around the great leads and solid practical effects. I watched all ten episodes of this season recently and I struggle even now to think about what really happened. People ran around a lot, Swamp Thing killed a bunch of people that came after him, and then everyone returned to their starting positions to, presumably, do it all again in a second season that never will appear. The show had so much it could have done but, in the end it really didn't do much of anything.

So yeah, long run I think that canceling the show was probably the right thing to do. Swamp Thing, Abby, and the setting can all show up again down the road, probably on Doom Patrol, but the series itself just didn't have enough going on to justify a second visit to the world.