So That Vault Really Didn't Help

After the original Borderlands was a success, you had to figure there'd be a sequel. The first game was such a fun, weird mix of ideas that gained a strong following of players. Everyone wanted to see a sequel, so developer Gearbox got back to work to make a second visit to everyone's favorite, blasted-out planet, Pandora. 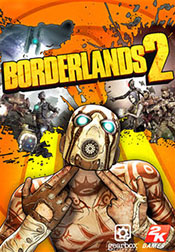 What made to the first game work so well was the tight shooting mixed with fun RPG elements. Many of the powers the characters could get were strong to the point of almost being game-breaking, but that was part of the charm. If you weren't so good at gun play you could rely on your powers to help get you out of a jam (I know I used the Siren's powers a lot in the late game to utterly wreck many of the bosses). While the story wasn't much to speak of (there's a vault, go find it), the gameplay was so good that it carried the game. The fear with a sequel would be that somehow Gearbox would have messed up the formula.

Of course, let's be honest, gamers are fickle beasts. We want sequels to somehow push the envelope, to give us more and different and better and yet at the same time we also don't want anything to change. We want more of the same while not wanting more of the same. How do you please that audience?

Well, Gearbox did their damnedest to try and suit the needs of their fanbase. Borderlands 2 doesn't try and reinvent the wheel -- while the characters (and their powers) are different the second time around, the base game hasn't changed all that much at all. Sure there were some gameplay tweaks to make the game a little tighter (and also a little harder), but the overall message is "you liked Borderlands? Well, here's way more of that." The sequel features more characters (through DLC unlocks), more areas, more guns, more powers. More, more, more.

That's not to say it's not a better game in many respects. There's a far greater emphasis on story this time around, all starting immediately with taunting messages from Handsome Jack, the villain of the piece and a constant voice in your ear (telling you how he's gonna murder you). You, the new vault hunter, dropped into a snowy landscape on Pandora, have to fight your way to the resistance (lead by the characters from the first game), battling through all new terrain, to help find a way to free Pandora from the grasp of Jack. There's constant plot missions spattered with so many sidequests, all delivered by much more fleshed out characters. For anyone that felt like the original game didn't have much going for it once you got used to the gunplay, the sequel delivers. 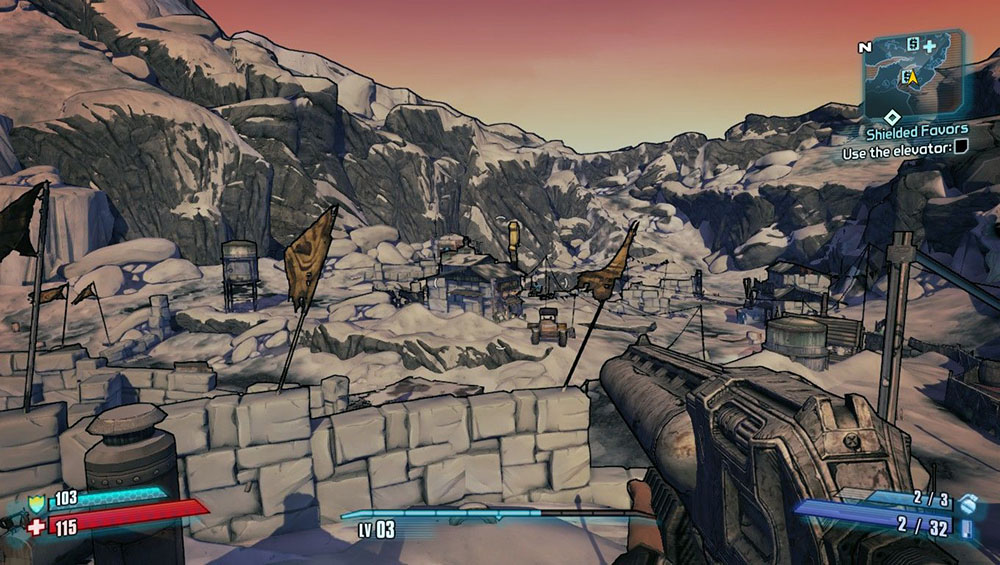 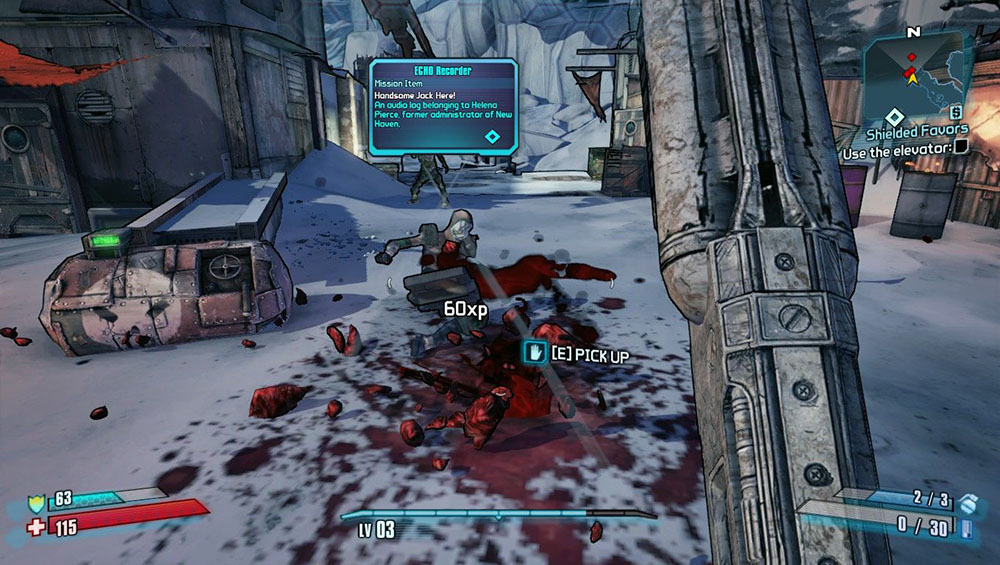 Plus, overall, I think the mix of characters this time around is better. I will fully admit that while I enjoyed the siren, hunter, and soldier from the first game and could use their powers quite effectively, the fourth character, Brick, bored me. Essentially a boxer, Brick's power was to get all juiced up and use his fists in combat. I guess if you really liked hand-to-hand combat this was the character for you, but he didn't really do much to sell himself in a shooting game.

The second time around, though, all the characters have their good points. I, again, played the siren who is delightfully overpowered (her phaseblast can decimate swaths of enemies once you get it powered up). I also really enjoyed the Commando (this game's version of the soldier) who can basically solo the game with his turret (and he eventually gets two, and can make them both ridiculous over time). I know a lot of people enjoy the Assassin (although I never really could get into him), but I did find a new love for the Gunzerker recently (with his ability to wield two guns at once for crazy amounts of damage). The two DLC characters also were a lot of fun -- the Mechromancer had her summon bot who added another powerful solder to the field, while the Psycho made up close fighting fun (via the sheer amount of damage he could do and his ability to resurrect himself with ease).

Plus there are the guns. So many guns, now, with each of the in-game companies producing themed guns so you can predict how they're going to operate even before you start using them. One complaint I had from the first game was that the guns weren't varied enough -- if you got a combat rifle from Atlas or Tediore they all worked and felt the same. Sure, maybe the Maliwan guns would have elements attached, but that was about the only real difference. Here, though, each gun company is different, with Tediore making cheapo guns that you throw away when the clip is empty (the gun replicates in your hand after), while Hyperion makes guns that lock-on as you fire them, meaning you gain control over your shots (instead of losing control the more bullets you fire, as with other guns). Each maker is distinct and you'll eventually find the right kind of guns for you based on your play style and how you like to run through scenarios.

Let's also not downplay the fact that there are so many different terrains in this game. The first game gave you basically one long, uninterrupted stretch of desert while this game starts you in the snow before showing you cities, plains, lakes, corrosive caverns, and volcanic hell-scapes. The world feels entirely different and so much more full of life. 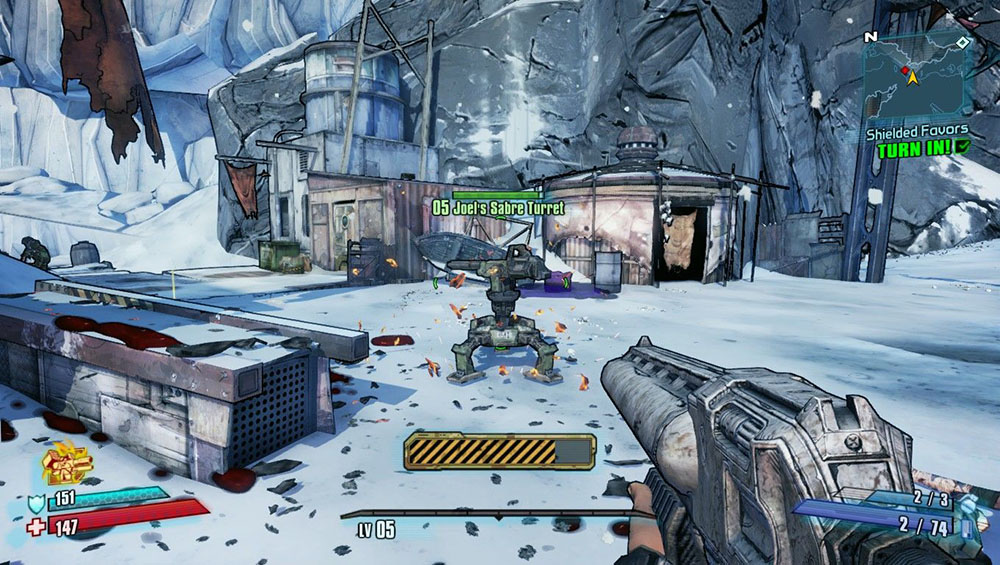 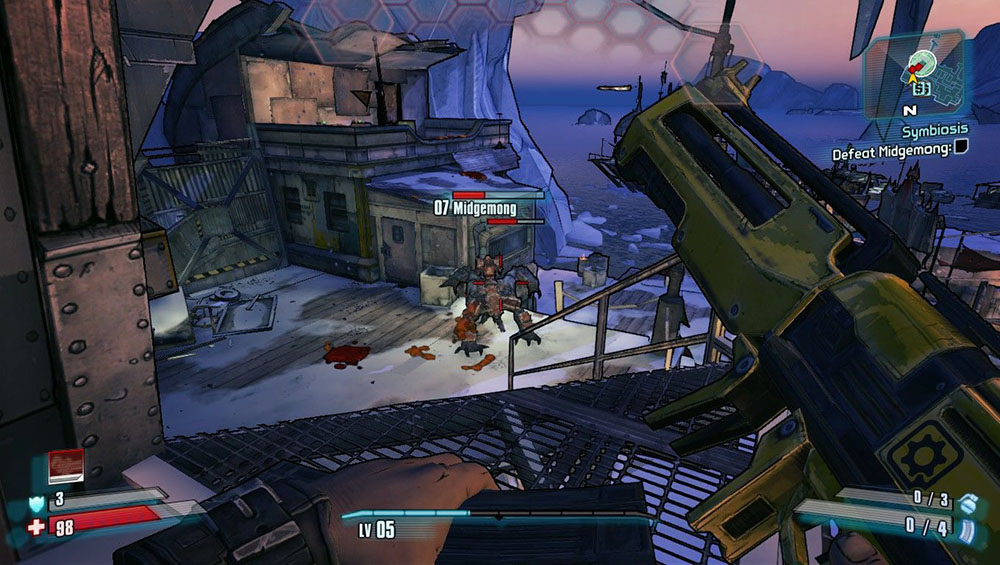 So yes, essentially, Gearbox delivered everything players wanted while, at the same time, answering all the criticisms of the first game. There's a reason so many people raved about how Borderlands 2 was what the first game should have been.

Before the game was even released, Gearbox was already taking about expansions, putting together a Season Pass for the first game which promised four expansions. Those ended up being:

Captain Scarlett and her Pirate's Booty

Taking place in Oasis, Pirate's Booty essentially took us back to the deserts that gave Pandora its blasted-out feel from the first game. This time, though, you're rampaging through the sands as sand-skiff pirates, all in search of a legendary lost treasure.

While the scenario is interesting, and fighting pirates for a little while can be kind of fun, this whole mission pack felt half-baked. Captain Scarlett herself wasn't much of a character, neither was vile as Jack nor as weirdly comic as so many of the other characters dotting Pandora. Plus, the missions themselves were pretty generic. It all amounted to "go to this place, fight through to a pirate, and then kill them." On and on. More variety would have been nice, along with a more interesting lead.

After the tedium of the first expansion, Gearbox let loose with Mr. Torgue. A ridiculous character that OFTEN spoke in CAPITALS and who absolutely loved EXPLOSIONS (all Torgue guns fire explosive rounds), Torgue anchored a righteously stupid romp through multiple battle arenas and side quests. The Torgue missions are, essentially, what would have happened if you'd stitched a plot through the Underdome missions from the first game and, damn if it doesn't work. 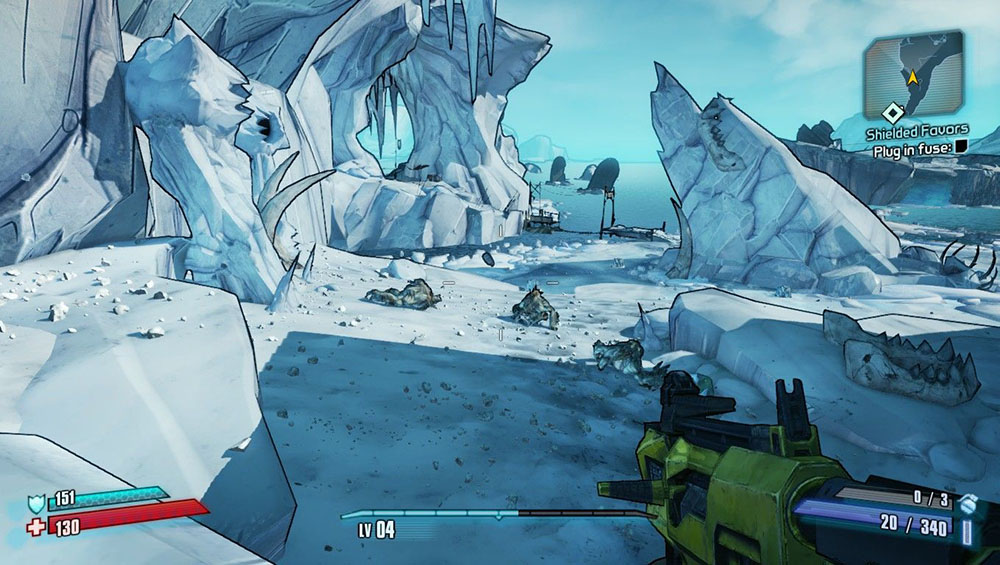 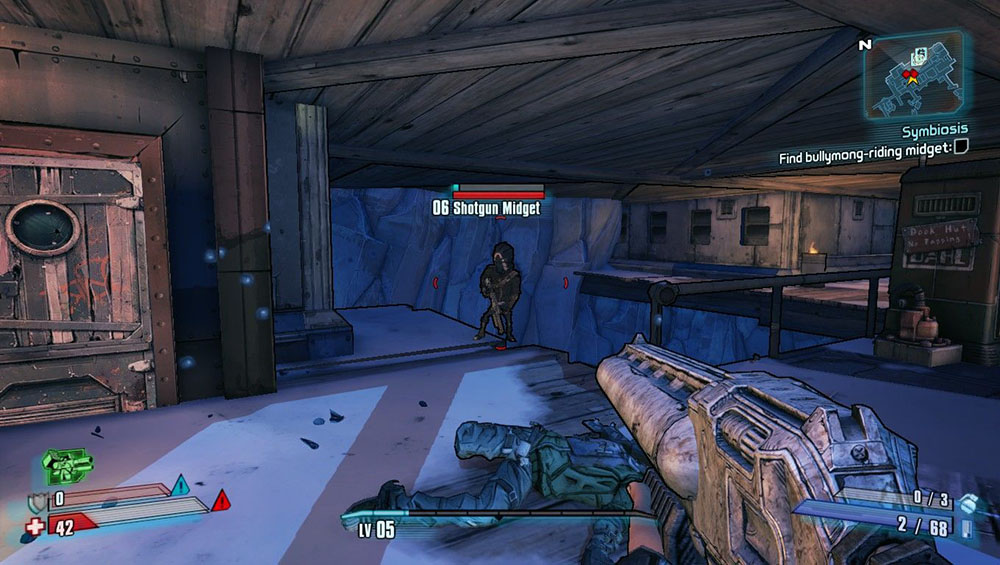 Don't get me wrong, the missions aren't really all that special on their own. What makes this mission pack work is Mr. Torgue, who is hilariously over the top. Gearbox also wisely added in Mad Moxxi and Tiny Tina, two great characters who shined in the main game and really get to let loose here. The story is dumb and funny and the constant character interaction livens the missions. This one is well worth playing over and over (which I have).

The Campaign of Carnage is a hard act to follow and, sadly, Sir Hammerlock is just not up to the task. While I liked Hammerlock in the main game (with his effete British sensibilities), he's not a funny enough character to anchor a full mission set. Plus, the big hunt you go on isn't really all that interesting (and, at times, is pretty racist to boot).

Plus, there are some curious decisions that hobble the fun of the game. The main hub land is really hard to navigate leaving first-time players search from where to go and what to do (it's weirdly broken up in three barely-connected areas that overlap making it impossible to navigate the area via the in-game map). Plus, one side mission in particular requires you to hunt rare versions of monsters that appear randomly, leaving you searching for hours sometimes just to get that one elusive monster. This mission pack was a lesson in tedium.

This is the motherlode of an expansion (and, as I recall, the biggest one made for the game). While the heroes are interrogating a Hyperion spy, the original cast of characters (from the first game) decide to play a game of "Bunkers and Badasses" (think a non-infringing Dungeons & Dragons), all Game Mastered by Tiny Tina. Thus, your characters are dumped into a fantasy world filled with skeletons, dragons, knights, and wizards. And, yes, you can explore this mission set and then go back to the main game with all the new, fantasy gear you've collected. It's ridiculous and amazing. 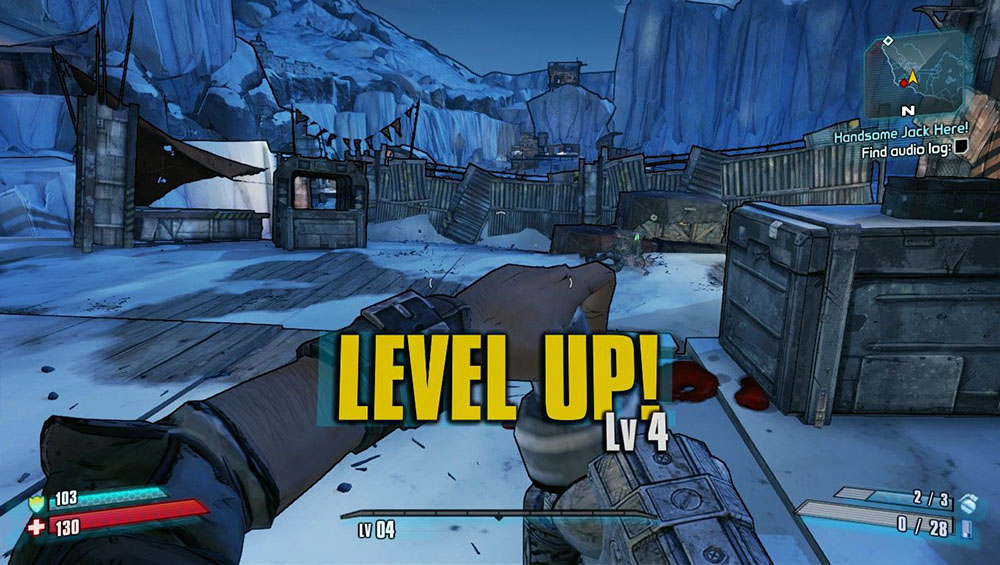 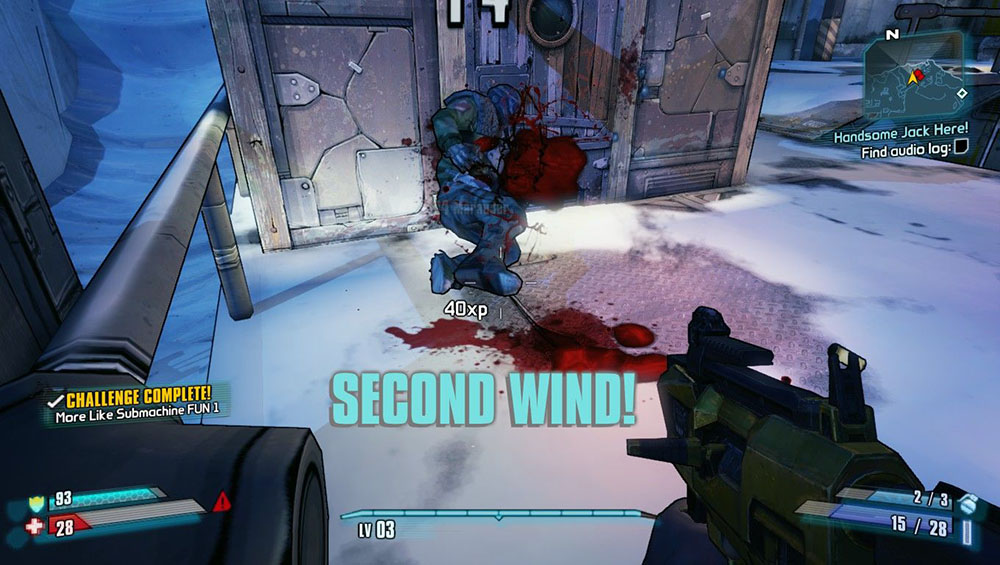 The whole of the expansion features new artwork and new voice work, making the Fantasy Pandora feel like a fresh, new game. It's practically enough to be its own stand-alone expansion (if not for bringing your characters in from the main game to play around). The amount of work, and love, put into this set of missions makes the whole endeavor sing.

Plus, let's not undersell the fact that Tiny Tina is a riot and having her voice always going as she leads the party through her fantasy game is great. This is easily the best, funniest set of missions in the whole game. If I had to choose just one expansion to play, this would have been it.

After the initial four expansions were released, Gearbox did a second season of smaller packs. These were called the "Headhunter Packs" as, after completing each of the short scenarios the player was given a new head for their characters to wear. The packs included:

The final mini-expansion unlocks one new area, Digistruct Peak. Here, players are put through a long arena of enemies and have to fight their way to the end. If played on the hardest difficulty level (Ultimate Vault Hunter), this area would unlock bonus "level" that don't grant the players any new upgrade points but do let them get stronger weapons. This was basically for the hard-core, end-game players so, obviously, your mileage will vary. I personally didn't do more than a single run through the mission (for completeness sake).