Having watched through the two name-checked inspirations (Bad Boys II and Point Break), it's time to get into the movie we all came here to see: Hot Fuzz. The second film of the eventual "Cornetto" Trilogy by director Edgar Wright (the first being Shaun of the Dead), Hot Fuzz is a loving parody of the action movie genre. It's a funny film that's also, very much, an action movie unto itself. 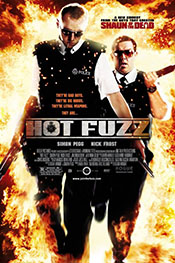 When parody movies are discussed, there are really two types (although I'm sure some cinephiles would argue for more): there's the parody of a specific film, of which you have Airplane (based on the 1957 disaster flick Zero Hour), Mel Brooks films like Spaceballs (Star Wars) and Robin Hood: Men in Tights (Robin Hood: Prince of Thieves) and the first Scary Movie (parodying Scream). The other type are broader, poking around at a genre or style of movies. Mel Brooks made a lot of these films, like History of the World, Part I (historical epics) and Blazing Saddles (Westerns), and Hot Fuzz certain fits into this style of parody.

Parody films are derided usually due an assumption that the material is shoddily slapped together with lazy call outs to other works without much in the way of jokes. The best films in the genre eschew this, but all it takes is a look at some the later parody output post-Scary Movie to see plenty of awful entries in the genre, from Meet the Spartans to The Starving Games. Those movies, though, are simply cash grabs to horn in on a popular property and/or genre to make a quick buck from willing audiences. And, usually, they work, so it's hard to argue with the Hollywood logic at play.

Thankfully, there's nothing lazy about Hot Fuzz. Although the film is pretty unashamed about calling out other action films, specifically Bad Boys II and Point Break, Hot Fuzz finds it's own way to construct an action movie while, the whole time, delivering plenty of jokes and gags. Even the premise itself is a gag as the film is an action movie set and filmed entirely in a quiet little British hamlet. When you think of Britain get picturesque landscapes with quiet, stuffy, fairly repressed people and on top of that we're talking about layering a big, brash, entirely American-genre (well, at least until recently with China and Russia both getting fully into the action game) over the top of it. There's nothing British about an action film which is why it works so well here.

When the movie begins we're introduced to Nicholas Angel (Simon Pegg), the best police officer London has ever seen. After excelling at everything (we get a well filmed montage to prove this), he's given a promotion that's really also a kick to the curb. It seems Angel has been making everyone else look bad (with a case close rate 400% better than anyone else), so the higher-ups in the Police shuffle Angel off to a quiet little hamlet where nothing ever happens. Except, once he gets there, he finds a sinister darkness lurking underneath the facade everyone in town presents. Right off the bat, then, we get joke poked at being British, from "being too good at something" (never show up other people) to "what's lurking underneath your mask" (which, if you're British is, presumably, just deeper and deeper layers of repression). 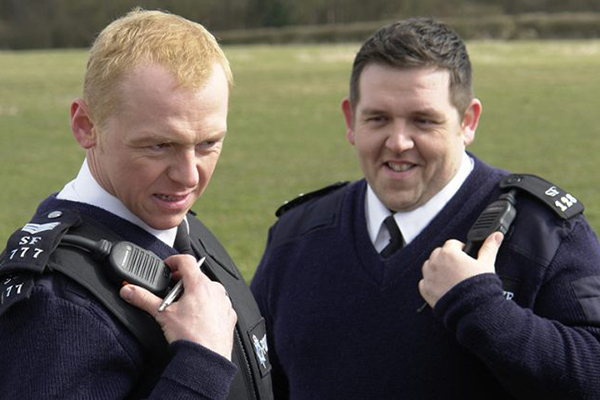 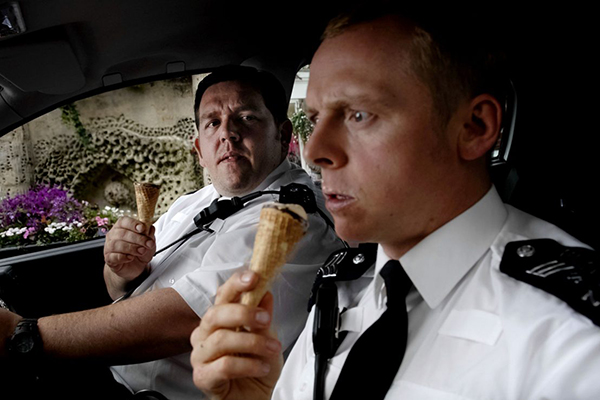 The movie isn't aimed just at British audiences (although having an appreciation for that level of dry humor helps). There are plenty of good lines, sight gags, and call backs to other films to keep you laughing throughout. Plus, of course, there's the action. The first half of the movie is pretty sparse on the action front, mostly setting up the eventual carnage that happens later in the film. We get a couple of hints at what will come, from Nick taking down some shoot-range targets at a carnival to a fist fight with a hulking brute. The last act, though, puts everything in motion, allowing the director to film large-scale violence in a quiet little hamlet. It's awesome.

But let's go back to the two movies that serve as inspiration, and we'll start with Point Break. As you'll recall from the discussion of that movie, what works in Point Break is the comradery of the two leads. Hot Fuzz hits similar notes, allowing you time to appreciate the dynamic between Angel and his partner, Constable Butterman (Nick Frost). During the highs and lows of their story, it's the eventual bromance between these two cops that drives the movie and makes you care about everything going on around them. It helps, of course, that both men can act and that they're friends in real life so their chemistry is already full-force before a single frame was filmed. Having these two in the lead does wonders for the movie, something Point Break could only aspire to (and sometimes achieve via Swayze alone).

Meanwhile, Bad Boys II was all about the action. Butterman in Hot Fuzz is an unabashed action movie fan, and he regularly calls out the things the leads in Bad Boys II performed -- jumping through the air whilst firing two guys, getting in a high-speed chase and firing a gun -- hoping to one day witness that kind of carnage. And he does. The whole last act of Hot Fuzz gives the sequences in Bad Boys II a run for its money (two-gun firing, high speed chases, and all). Edgar Wright isn't the same kind of director as Michael Bay, so the shots in Hot Fuzz aren't anywhere near as elaborate as Bay's best work.

However, Wright has an eye for coreography, not of the actors but of the story. He has a way of setting up details that pay off either seconds or minutes later. When you watch a Wright movie you have to pay attention to all the details because something mentioned at the beginning of the movie might come into play at the end with a parallel sequence and repeated call back. A tossed-off line can blow up into a full action sequence, or a few moments of action can lead to a long sequence of similar shots. Everything is tightly planned and smoothly edited, lending the film a propulsive energy (both for the action and the laughs) that drives the movie forward in a way I'd say even many of Michael Bay's films are unable to do. 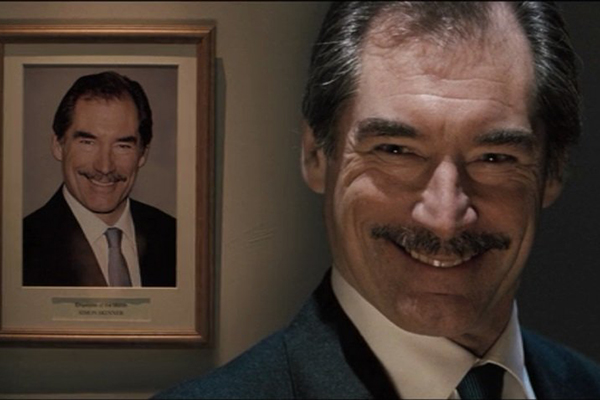 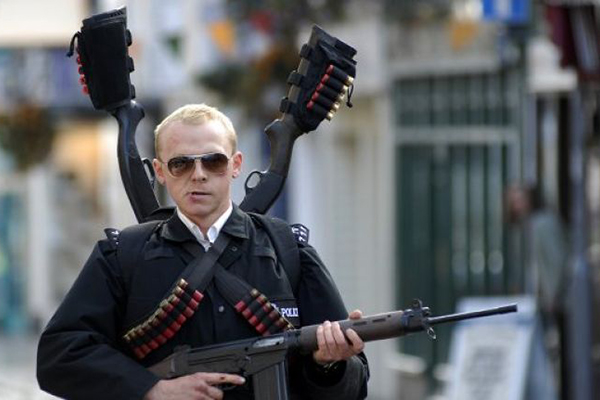 In many ways Hot Fuzz is an improvement on the action movies that came before -- a better relationship than in Point Break, comparable action to Bad Boys II -- all with being both a loving tribute and send up of the genre. It's not the best action movie out there (if you want nothing but carnage and wonton killing, might I recommend John Wick), but it's probably one of the best comedies to ever tackle the genre. And, heck, it's just one of my favorite comedies period.