A Well-Seasoned Blend of Asian Flavors

In recent months I moved across country, relocating from Central Indiana to West-Central Virginia. It was a big move, not just for logistics but also just because it required me to learn a whole new area. New streets, new places, new stores. When you've lived in a place for close to two decades, any major relocation is going to require a big rewiring of the brain. You've left the creature comforts you know, left the place where you've set your metaphorical butt dent. Now it's time to start all over again in a new place and find that comfortable spot once more.

When I make a move, big or small, one of the first things I try to do is figure out where all the Asian restaurants are. Asian food is, hands down, my favorite style of food, and while that is a pretty broad grouping, I do find that, in general, it applies. If someone suggests going out to eat, whether its for Chinese, Sushi, Thai, Korean, or Mongolian (just to name the styles that come to mind), I'm immediately more interested than if, say, Mexican or Italian were suggested. These are the foods I crave, so I have to find the right places to eat wherever I live.

Thankfully, near my new home in Virginia there's a solid Thai restaurant, Napa Thai, that has the kind of quality food I enjoy. I have sampled more than a few Thai restaurants over the years, and when you wander into one you'll more or less know what to expect on the menu: pretty standard Asian apps, a selection of "traaditional" dishes, some noodle dishes, and curries. Napa Thai has all those, along with a few more out of the box items, that help to give the menu depth. I wouldn't say every one of their experiments are winners, but they have more than enough solid dishes to make any diner happy.

Starting with appetizers, the winner for me are the spring rolls. A spring roll is a pretty standard appetizer on any Asian menu, but it's surprising how many restaurants fail to get these right. A good spring roll should have a light and crispy wrapper, filled with tasty, savory elements inside that blend well in the mouth without dtstracting from the crunch of the roll. Napa Thai nails this, providing three crunchy and delicious rolls with just the right savory flavor inside. The contents aren't distracting, nothing too chewy or chunky within, making for a delicous blend containing just the right levels of umami and salt, to leave the tongue happy after your finish your bite.

Sadly, their garden rolls (often called "summer rolls" at other restaurants) aren't as good. These soy paper-wrapped rolls are filled with a lot of greens (especially basil) and have that graden crunch you'd want. What they lack, though, is flavor. They're too bland, too green, without the needed pop to make them instantly scrumptious. Even the peanut dipping sauce served on the side doesn't add quite enough flavor to really make these sing. Although garden rolls are a healthier option over the fried spring rolls, I'd still lean towards the fried option when I'm ordering apps. 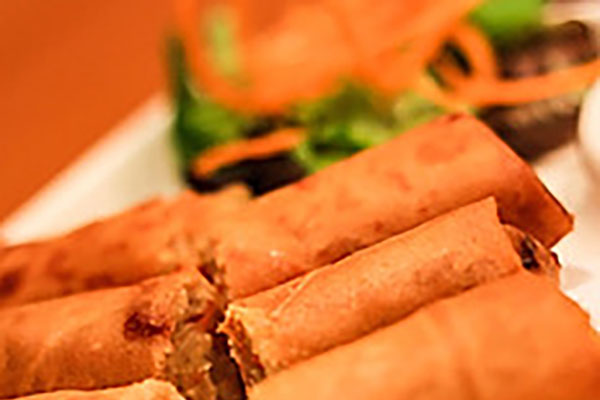 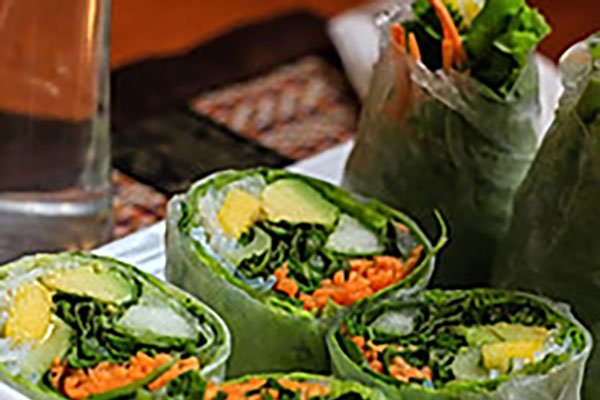 Moving over other traditional appetizer fare, I will note that the restaurant's satay chicken is exactly what you'd expect from satay chicken. It's perfectly average flavor wise, and while well cooked I wouldn't say it does anything particularly special with the concept of "marinated chicken on a stick". My wife, who loves eating meat off sticks, thought they were good, but I don't know that I'd get them on my own.

Meanwhile, the lemongrass soup my wife ordered wasn't an immediate "must get" for the future. It's a soup that leans very heavily on tomato flavors, with a light broth punctuated by the acidic veggie's flavors. This, along with a heavy emphasis on the lemon, made for a very sharp soup. The flavor was bright, and salty, but all became a bit too much as she neared the end of the bowl. This wasn't a cup of soup she could finish hon her own, just due to its strong flavors, and the few sips I had led me to agree with that assessment.

Speaking of soups, the restaurant does offer a set of "Thai Inspired" Pho options. This is one of the weirder offerings on their menu, so during one of my visits I had to try it out. Unlike with Vietnamese Pho, which is generally served with the noodles in the broth and the meat on top, with everything else served on the side so you can assemble your soup to taste, Napa's "Thai Pho" comes preassembled with all the toppings and acoutrements mixed in. For the beef soup I ordered, this meant the beef came out overcooked, the thick slices having stewed in the broth for a while. The flavor was also a little more basic than I would have liked, and while I could have spiced things up with their offered "spice rack", for anyone just getting this soup "as is", it might come across a little too bland. Not as bold as I expect from Pho.

Before delving into the rest of the dishes I've tried, I do want to discuss their sauce and spice rack. Any time you eat in at Napa Thai, the servers will offer to bring out the spices for you to use in their dishes. These range from a a spcy red sauce heavy on chilis, to a salty green sauce with just a bit of heat, and then a ground dry seasoning that really has the burn behind it. Generally I like things spicy, so I'm all for adding heat, but most of the dishes at Napa Thai, by default, don't edge up on the heat scale. If you want a lot more heat to your food, ask for the spices. It would, at the very least, kick up the Pho to a tasty degree. You are also able to ask for the dishes at any heat level you want (from 1 to 10), but the sauces let you get a little more control over your flavor profile, if that's your thing. 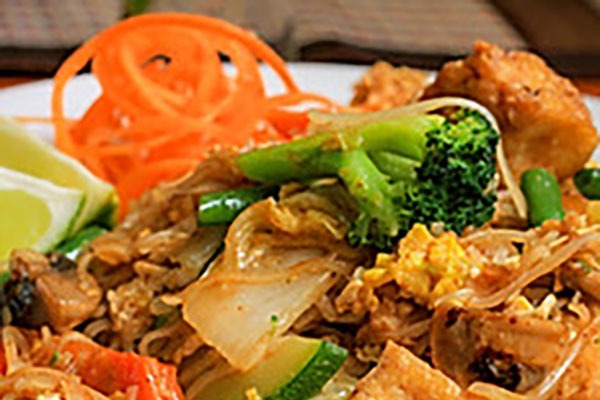 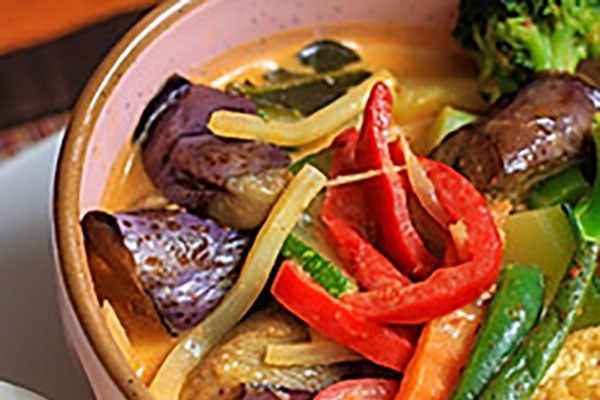 Where Napa's food shines is in the more traditional Thai offerings. When I go to a Thai restaurant, one of the first things I order is their Red Curry. That's because I tend to find that Red Curry is a hard dish to really screw up (everyone knows how it should be made), so it works as a good barometer for a place. If they do screw up the Red Curry, you know that nothing else they serve will be good, but you can also see how they like to season things, where their heat scale sits, and what the quality of their ingredients will be, all from this simple and flavorful dish.

Thankfully, Napa managed to knock their Red Curry out of the park. While the sauce was a little thinner than I expected (I'm used to very thick curry, heavy on the coconut milk), I actually liked the slightly more delicate broth of Napa's curry. And while the sauce was a little thinner than I first expected, it certainly had more veggies and flavor than I could have hoped for. I'm used to restaurants going heavy on the meat with the veggies reserved as more of a "garnish", but Napa provided plenty of both. The chicken was thin sliced and well cooked, while the dish was loaded with eggplant, pepper, green bean and basil. And, the curry brought the heat, with teh menu noting it as a 6 out of 10 heat level (the highest I saw on the menu), and it did feel spicy. I got just enough heat on my tongue to feel it (and I like spice, so that's a high bar to hit). I have a feeling if I asked for the dish to be any spicier it might have actually gotten uncomfortable, so this was pitched perfectly.

During that meal my wife ordered the Garlic Beef, which came out as a simple dish with a lot of flavor. Served in a light brown sauce, with a lot of garlic thrown in, the dish felt very traditional for any Asian restaurant, but had a lot of flavor behind it. It wasn't spicy, only scored as a 2 out of 10, but it didn't lack for savory notes. My wife cleaned her plate during that visit. She also enjoyed her Pad Thai on her next visit, and this is another of those traditional dishes that you expect everyone to make well. The noodles were just the right level of cooked, soft but not too gummy, and the dish was well flavors, heavy on the creamy, peanut notes.

The other dish I really enjoyed was the Pad Kapow. Like the above dishes, you expect to see this (under one spelling or another) at any Thai restaurant. Napa's version didn't feel super traditional, more like a brown sauce Asian dish with standard slices of chicken and veggies. That said, the dish have both flavor and spice, with a lot of basil included. While the preparation may not have been quite what I expected, the dish was delcious and, despite getting the dinner order with apps before, I still finished off the whole plate. 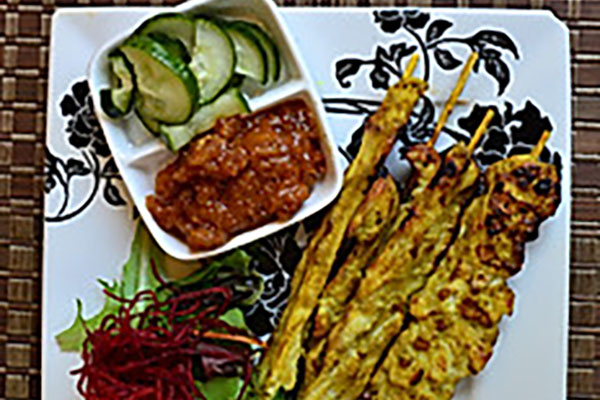 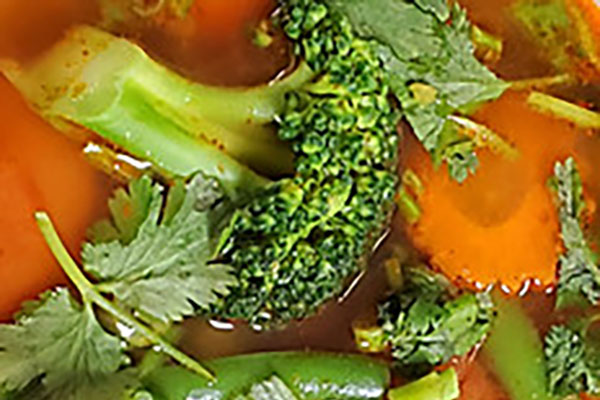 Finally, rounding out the meal were our bevarages. While I haven't sampled the alcohol on offer, as I'm not a big drinker, my wife and I have at least gone in for the traditional hot and cold beverages. She's tried both the ginger and jasmine teas, and came away enjoying the both. The jasmine is light and flavorful, but in my opinion needed a bit of sweetness to pick it up (I like sugar in my tea because I'm a monster). The giner tea, meanwhile, came out naturally sweeter, with a bit of that sharp ginger bite. She and I both enjoyed this one a lot, being an immediately sippable treat. That goes double for their Thai Iced Coffee, which is a smooth blend of dark roast and sweetened milk. This drink is so smooth, it's frankly the best coffee I've found in town yet. I have half a mind, when I'm rolling around downtown, just to stop in and get their iced coffee while running errands. It's good enough to pull me in just for the coffee, even if I'm not getting any food.

After three visits to Napa Thai, I'd consider their food a must try for anyone visiting the area. It's good, especially when you stick to their traditional offerings, with enough flavor to really suck you in. While I can't recommend their outside the box dished, not for anyone that expects things to be a certain way, there's enough to like and enjoy from Napa's menu to suit anyone with a craving for Thai food. The food is delcious, and the menu is priced to suit the quality of their food. For the price, this restaurant is well worth the visit.