Skittles are an odd candy. I don't mean on their own, mind you, as they're essentially what you'd get if you had a marketing exec say, "you know, kids like M&Ms, so what if we just did that but with fruit flavors." No, the reason Skittles are weird is because the company that makes them, Mars, has tried repeatedly to expand the line and come up with weird and wild flavors that would attract new audiences. Some of these experiments, such as the Tropical and Wild Berry Skittles that acted as the first new flavors in the line (after the original selection of Strawberry, Grape, Lime, Lemon, and Orange was introduced) have stuck around. Other flavors, well... less so. 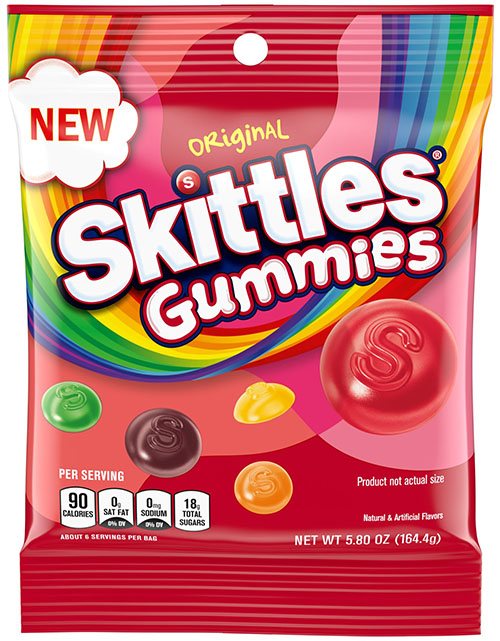 There have been some real gems in the Skittles line that haven't survived for long. I personally really loved the Skittles Gum which was little round gum pieces that tasted exactly like Skittles (those were so good), but sadly they didn't make it a year. Other ideas, like Skittles Mints (which were decent as mints but I think most people found the chewy mints that weren't gum off-putting) or Skittles Chocolate flavors (which, ugh, no), certainly seemed bold but weren't really good ideas. Most of the time, then, Skittles stays in its own lane, releasing candies made from the basic form factor of a Skittle and flavored with fruit sensations (the boldest Skittles generally gets is to put sour powder on their Skittles and, mmm, those are great).

But then we had the recent release of Skittles Gummies and I had to try them out. Generally speaking, Skittles have stayed well within their form-factor and style (gum notwithstanding), so a product like this did seem interesting. Starbursts have had success taking their flavors and applying it to other types of candy -- ropes, jelly beans, and heck even ice cream -- but I had to wonder if Skittles could have that same success. Is the flavor of Skittles enough to translate, and be delicious, and the basic factor of the candy is different? Could this be like the gum and be amazing despite its different style?

The sad fact is that these new Gummies aren't good but it's not because of the form factor. Instead, this candy makes a cardinal mistake in translating the Skittles name to another type of candy: it stops tasting like Skittles. The thing I liked about the gum was the fact that it still tasted like Skittles with its distinctive grape, strawberry, lime (apple hadn't come around at the time), lemon, and orange flavors. But these Gummies don't really taste like much of anything but sugar, and they certainly don't taste like Skittles. Considering the gum could bring the flavor over from the candies this seems like the first step in translating Skittles to anything else, and yet the Gummies drop the ball.

On their own the Gummies aren't exactly terrible. They're a firm little chew that'd made vaguely in the shape of a Skittle (i.e., a rotund dot of gummy sweet). They don't look off-putting, and their smell is what'd you expect: sugary fruit. I didn't had their in consistency as they give you exactly what's advertised: it's a gummy that looks sort of like a Skittle (you know, if you squint and tilt your head just so).

The taste, though, just isn't there. They aren't bad, mind you, but they aren't good either. Skittles have this taste that somehow wires itself into your brain such that you find yourself popping them in, by ones and twos, so you can "taste the rainbow" (if you will). The flavor is strong, but (for most flavors) good. The Gummies, though, don't have a strong flavor. They're sweet, yes, but there's nothing really distinctive about them; most of them taste the same, with the only stand out (such as it is) being a slightly "zesty" flavor off the orange gummies. None of them are good, and they certainly don't taste like Skittles.

What they remind me of, more than anything, are fruit snacks, those (supposedly) healthy chewy bits sold for kids lunches. Like Skittles Gummies, fruits snacks don't generally have distinctive flavors, they just have shapes and colors that are supposed to imply flavors even while the actual flavor is more akin to "sugar miasma". That's what I get from Skittles Gummies, less a flavor than a sense that these were somehow give a vague sense of fruit and then shoved out the door to go in lunch boxes.

Except, here's the thing: Skittles Gummies are, very much, not healthy. Okay, sure, likely fruit snacks aren't either as they're some unholy combination of fruit juice, sugar, and gelatin, but Skittles Gummies don't even have the "fruit" part of that equation. These Gummies are just sugar and gel, and the only fruit flavor they have is artificial. If Mars wanted them to be thought of like fruit snacks they needed to actually make them like fruit snacks. These have all the favor (or lack there of) without any of the supposed benefits.

I struggle to think what the market is for these, honestly. They aren't flavorful enough to be true Skittles, but they aren't made with anything that would actually make them comparable to proper fruit snacks. I think, if they had actual fruit juice somewhere in their unholy makeup, these would actually be pretty decent little fruit snacks and likely would sell pretty well. "Mommy let me have Skittles in my lunch," the little child would say as she (or he) was actually getting something that (at one point) once might have been actual fruit. Meanwhile the parent is happy because while the child is still eating something vaguely like candy it isn't as bad as actual candy.

I'm all for Skittles branching out and trying new things from time to time. Skittles in ice cream (or sorbet) could be good. Skittles as gum was an absolute winner. Hell, do like Nerds, crunch up Skittles into pieces and plaster them onto fruit candy ropes (Nerd Ropes are solid snacking). In the case of Gummies, though, perhaps Skittles should have stayed just a little more in their own lane. These forgettable chews aren't worthy of the "Skittles" name.

Editor's Note: There is apparently also a Wild Berry variety of Skittles Gummies, but stores in our area do not currently have them. Reportedly the flavor of the Wild Berry variety is "stronger", which might mitigate some of the complaints in this review. However, until a bag of the candies can be found to test that first hand those reports have to be taken with a grain of salt.