Zelda II: The Adventure of Link

I've written a lot about Zelda II, not just an overview of the game for ICVD but also a look at the randomizer on this site... and now this review as well. It's amusing to note this because, back in the day I really hated Zelda II: The Adventure of Link. Any child of the NES era knew the game, knew it was a drastically different breed of game from the original The Legend of Zelda, and knew, without a shadow of a doubt, that the game was absolutely obnoxious to play. 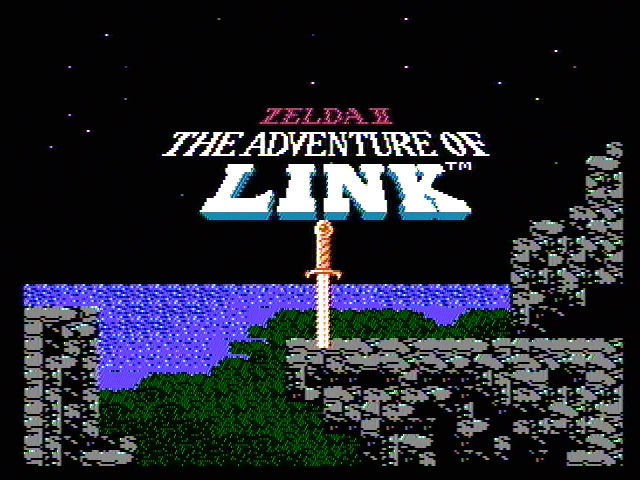 And yet, over the years my opinion of the second ever Legend of ZeldaCreated by Nintendo in 1986, the original Legend of Zelda game presented players with a open world to explore, packed with dungeons and monsters all ready to kill them at a moment's notice. The mix of adventure and action game play created a winning game and launched not only a successful series but an entirely new video game genre. game has softened. In part that's because I've been able to see others play the game Online and see how it can be done "right". I think, though, that my attitude has shifted because what I want out of games now, nearly thirty years after this game was originally released, is different than back when it first came out. Beating a game isn't my main goal anymore; now I just want an experience, and there's no doubt that Zelda II is an experience all its own.

When you compare the original The Legend of Zelda and Zelda II, they feel like two very different games, as if they belong to completely different series. That is, in large part, because the team at NintendoSince 1983 (with the release of the Famicom gaming system in Japan), Nintendo has proven to be a gaming company dedicated to finding what gamers want, even when the gamers don't know it themselves. From dual-screen systems, to motion controls, to convertible home console/portable consoles, Nintendo regularly proves that the weirdest innovation is exactly what the gaming community needs. responsible for the original game didn't make the sequel. Instead, those duties were passed off to the Super Mario SeriesHe's the world's most famous plumber and the biggest face in Nintendo's stable, a character so ubiquitous you already knew we were talking about Mario even before we said his name. team and those guys decided to make a game around the concepts they knew. A platformer, an action game, one that had very little to do with the Zelda that came before.

From the outset things are very different in the land of Hyrule. Link (who really isn't the same Link from the first game, even if the title is obtuse about that fact) stands in Hyrule Temple where the sleeping Princess Zelda lies. She's been cursed and the only way to save her, and wake her up, is for Link to defeat the various beasts guarding six temples around Hyrule. Only then can he get into the Great Temple and defeat the fiends within. That will break the curse and, in the process, save the land of Hyrule once more. So yes, it's a quest to explore dungeons and defeat monsters, but right as you are there, with Link, you'll notice one big change: we're side-scrolling.

Sure, when you leave the temple and go out into the world you get an overworld like you might expect, but that's just a veneer. Monsters will pop up and when they attack you'll get taken into side-scrolling action zones. Any time you enter a cave, or a town, or a dungeon, the game switches to side-scrolling. The overworld may be top down but everything you're going to do will expect you to platform. You'll have to brush up on your mechanics, and learn to fight from this new dimension, if you want to have any chance of getting through the game. 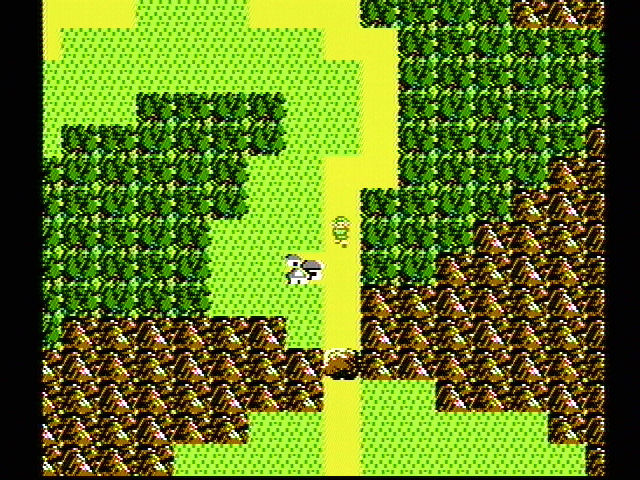 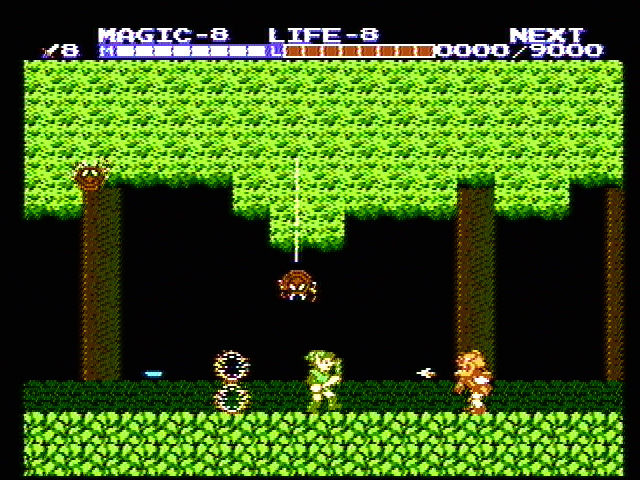 Although you can find plenty of people Online that can now get through Zelda II, I'd be willing to be that the game had plenty of kids that quickly threw down their controller in disgust once they'd played a bit of this game. That's because the core game play of Zelda II -- the running, jumping, and stabbing -- is incredibly difficult to get a hold of. The enemies in the game do a ton of damage to weak little Link while he can't seem to do much of anything with his pathetic sword stabs. Of course, that's only if he actually manages to hit anything with his sword as the hit box is tiny and it leaves Link pretty darn open to attack. You'll die, a lot, as you learn the way of playing Zelda II.

Battles are, in effect, duels with each monster you come across. It doesn't matter if it's a basic slime or a massive boss, most of what you'll be doing is dodging, feinting, and looking for ways to get your sword in to do damage. Battles in Zelda II are a dance, one for your life, and one missed step can lead to a ton of damage that sends you reeling. In some ways Zelda II feels like a precursor to the Souls games with intense combat spiked by a high learning curve. However, once you get it the game unlocks before you. It's never easy but it does get more manageable.

Of course, most people know Zelda II as the narrative oddity that went nowhere. The series immediately reverted to the traditional top-down style for the third game in the series, A Link to the Past, and it stuck with that style of play for all of it's non-3D adventures. There are more "traditional" Zelda games in the series than anything resembling Zelda II.

But I will note that there are more than a few games that at least had to borrow something from where Zelda II was exploring. The second Link (whichever one it was) moved into 3D, platforming of some kind was suddenly back on the table. As the games moved on they got more interesting with their mechanics, sometimes flirting with the RPG-style mechanics of Zelda II. And then, of course, there's Breath of the Wild, a game more than willing to throw away everything that made Zelda, just like the second game ever in the series tried to do as well. 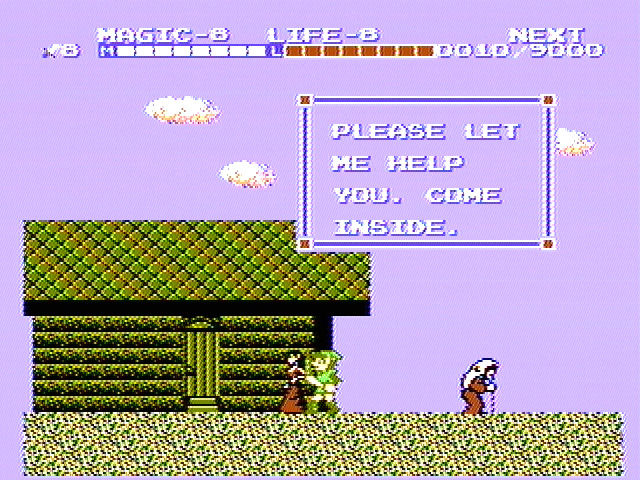 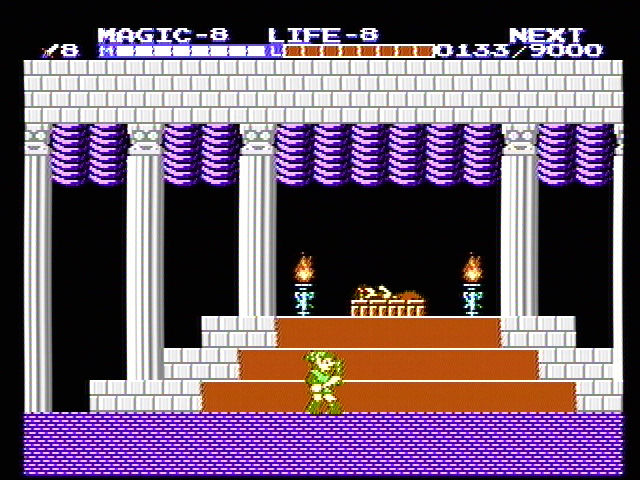 Now I'm not going to argue that Zelda II is in any way as good as Breath of the Wild. It's very much not. In fact, even as my opinion of Zelda II has softened I still can't say that I really like the game. It's rough, and evil, and has a penchant for sending up back to start, over and over again, without mercy. Zelda II is a slap in the face to players wanting anything even remotely like the challenge of the first game. It doesn't care about your anger, or your pain. Like a Cenobite, it's there for your suffering.

And yet... sometimes the game just clicks right. Watching a good player work through the game is like seeing a painter deliver a masterpiece. You can see how it's done, you can see the artistry at play. You can't do it, and never will, but there is some kind of beauty in good play in Zelda II, and that at least is something.