Putting On a Marathon is a Lot of Work

Thoughts from the FFR Rando Marathon 2022

It's been a little while since I covered a speed-running marathon (not since 2019 on this site). Obviously that's not for a lack of marathons to cover (seriously, you can find some kind of speed-running marathon going on basically every week at this point), but simply because I didn't really feel like I had much new to say. There are only so many times you can say, "this was a good run, this was an okay run," before you repeat yourself. They're fun to watch, but eh, they didn't need my coverage of their events. 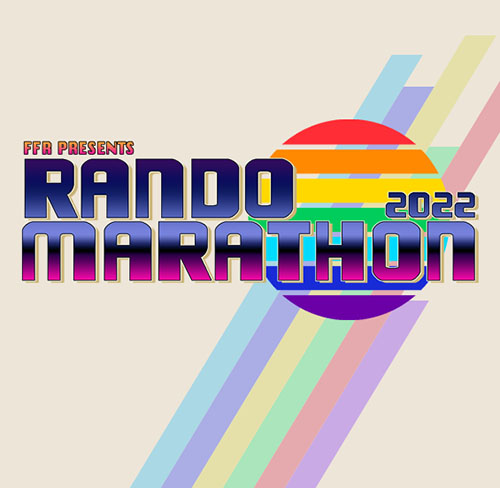 That being said, I had a different perspective this last weekend as I helped put on the FFR Rando Marathon 2022. This event, put on by the Final Fantasy Randomizer community, was the first marathon the community had ever run. We'd put on plenty of tournaments and other events, but noting quite like this with all the extra work (and organizing) that went into it. Suddenly I could look at other marathons that I'd watched and appreciated just how much effort something like this required.

The marathon was three days with an emphasis on randomizers. This was inspired by the previous RandoMania marathons that had been put on in years past, and we decided to take up the mantle and do our own version when RandoMania went off the air. It felt like there was an opportunity to continue showcasing randomizers, large and small, so that fans (and new viewers) could learn all about these games and see them played in a fun and competitive setting. On that score we succeeded quite nicely as there were a lot of viewers getting to see all kinds of games, not all of which many of the viewers even knew existed.

We'll get to some of the games in a bit, but before that I want to look at just what it takes to actually put one of these together. When you think of speed-running marathons, a couple of big ones come to mind. Obviously there the Game Done Quick events, as well as the biannual marathons put on by the European Speed-running Association. And there's RPG Limit Break which naturally has an emphasis on role playing games. When you want to put on a marathon you have to try and match these events for what they do and what they offer. If you can't hit anywhere near their level of professionalism then you've missed the mark. We in the FFR community weren't expecting to have the same kinds of viewership numbers (or donation numbers) as GDQ but we did need to rise to their level for presentation.

That meant we had to not only get a good layout together (both graphically and from a coding perspective) and then organize the event so it ran as smoothly as possible. Thankfully we have some very dedicated members of the community who came together to not only help get the word out and organize the behind-the-scenes of the event, but we also had a code (Online name of adr) who helped put the layout together and make it do everything we needed it to do. Everything was voluntary, no one got paid for their work, and everything we raised went to charity, but I have to say, I think we really did nail that GDQ feel (which you can see in the runs). 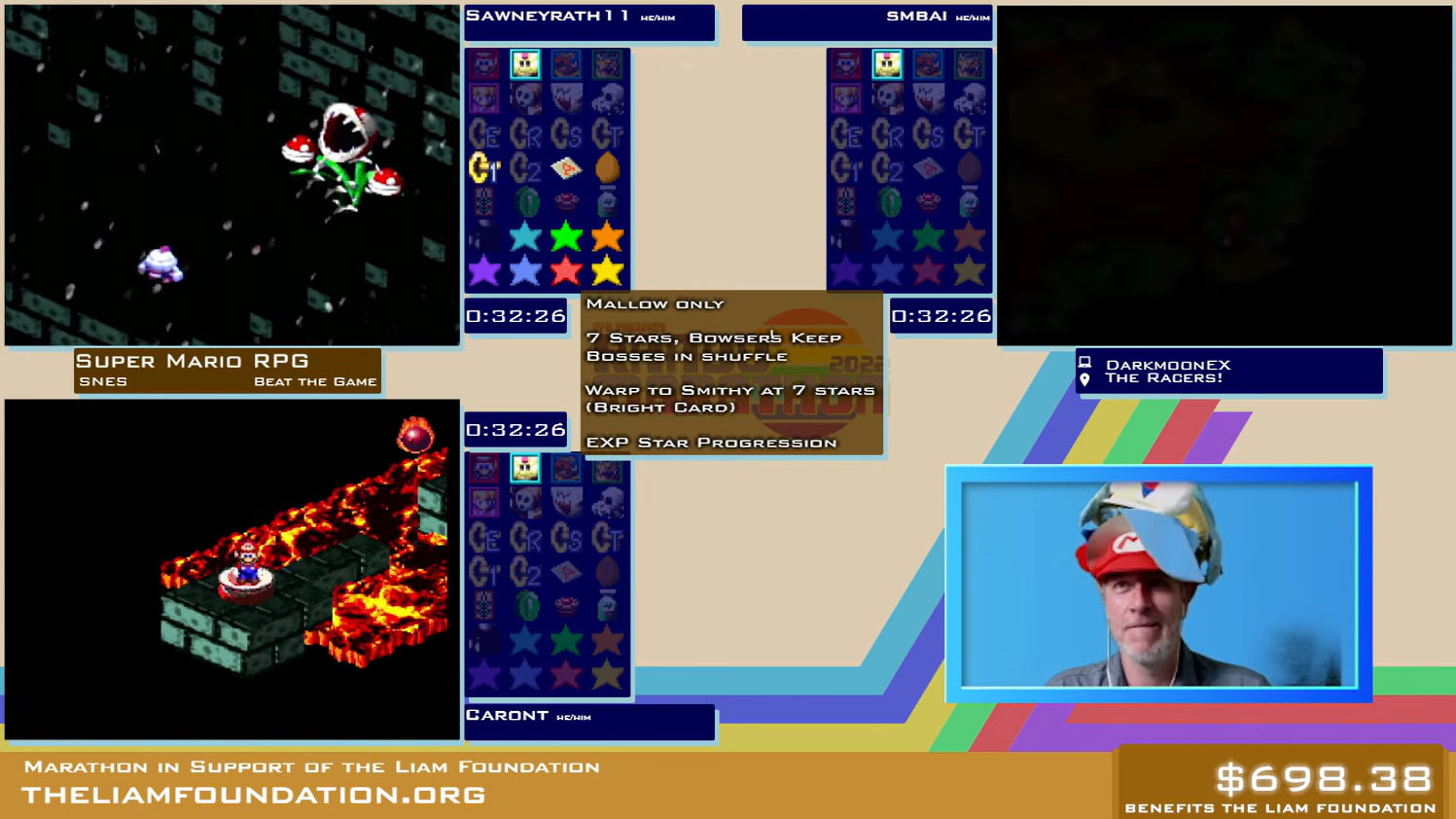 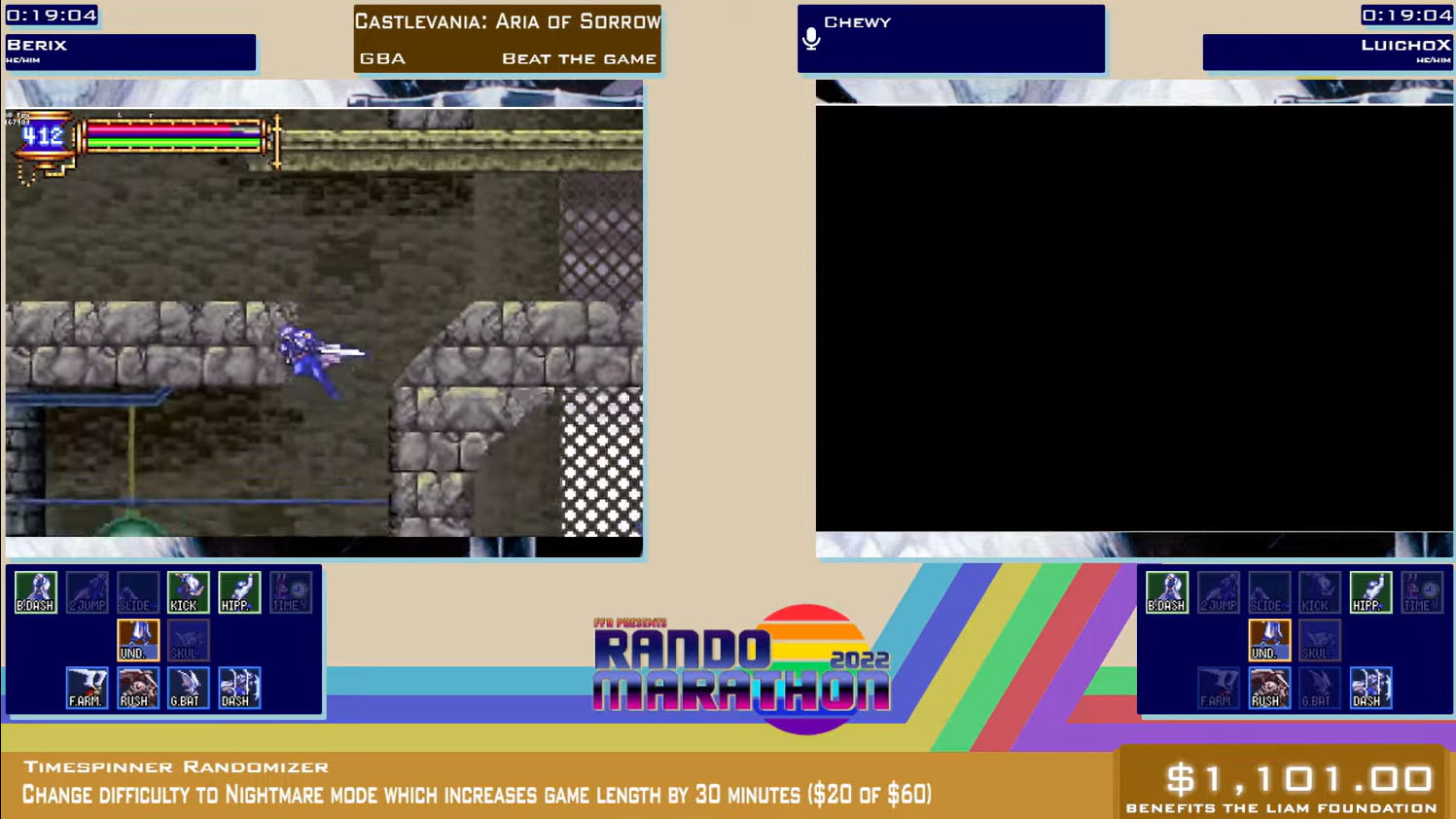 As far as our charity, we have to give a big thanks to The LIAM Foundation for partnering with us. The board of the charity, which helps the LGBTQIA+ community in and around the Rockford, IL area, really didn't know anything about speed-running marathons but they embraced what we were doing whole-heartedly. They worked with us every step of the way, even when we had to get them to sign up for Online tools just so we could run their donations. It worked out in the end as we raised over $4,000 for the charity, 100% of which is going to them (as FFR didn't take any cut at all). That's smaller than some of the big marathons, sure, but for a small community like ours, for our first event, it was a huge number for us. And it'll do a lot of good for a local charity like The Liam Foundation.

And, I have to say, actually being a part of the marathon was a blast. Yes, it was tiring (I was basically a ball of stress for the two weeks leading up to it, and I barely slept at all for the three days of the event, but it was so much fun. Well worth the time and effort, not just because we helped a great cause but also because it was just so much fun to be there in the moment. I may have slept for most of the next day after it was all over with, but it was still a great time.

All grand feelings about the marathon laid out on the table, now let's actually look at the runs for a bit. There were a total of 19 randomizers shown off in the main days, as well as an all-night Final Fantasy Randomizer run and an all-night Archipelago block of games. Final Fantasy Randomizer's night featured three players going head-to-head-to-head in a short and fast flag-set, playing as many sees as they could before the block ran out. Meanwhile, if you haven't seen Archipelago, it's a multi-world, multi-game randomizer that essentially let's you mix and match any game you want (that's been put into the system) with any other game other people want to play. It's a crazy randomization experience and one I'd recommend watching.

For more traditional runs, I do have a few recommendations. The first day featured a crazy run of Castlevania: Aria of Sorrow which featured two runners getting a seed so gorgeously perfect they both beat the estimate for their block by an hour (giving them enough time to run a second seed). There was also a great run of Castlevania: Symphony of the Night which, not to toot my own horn, did have my on commentary for the run (and, as I overheard from a few viewers, had some of the best comms of the marathon, a-thank you very much). 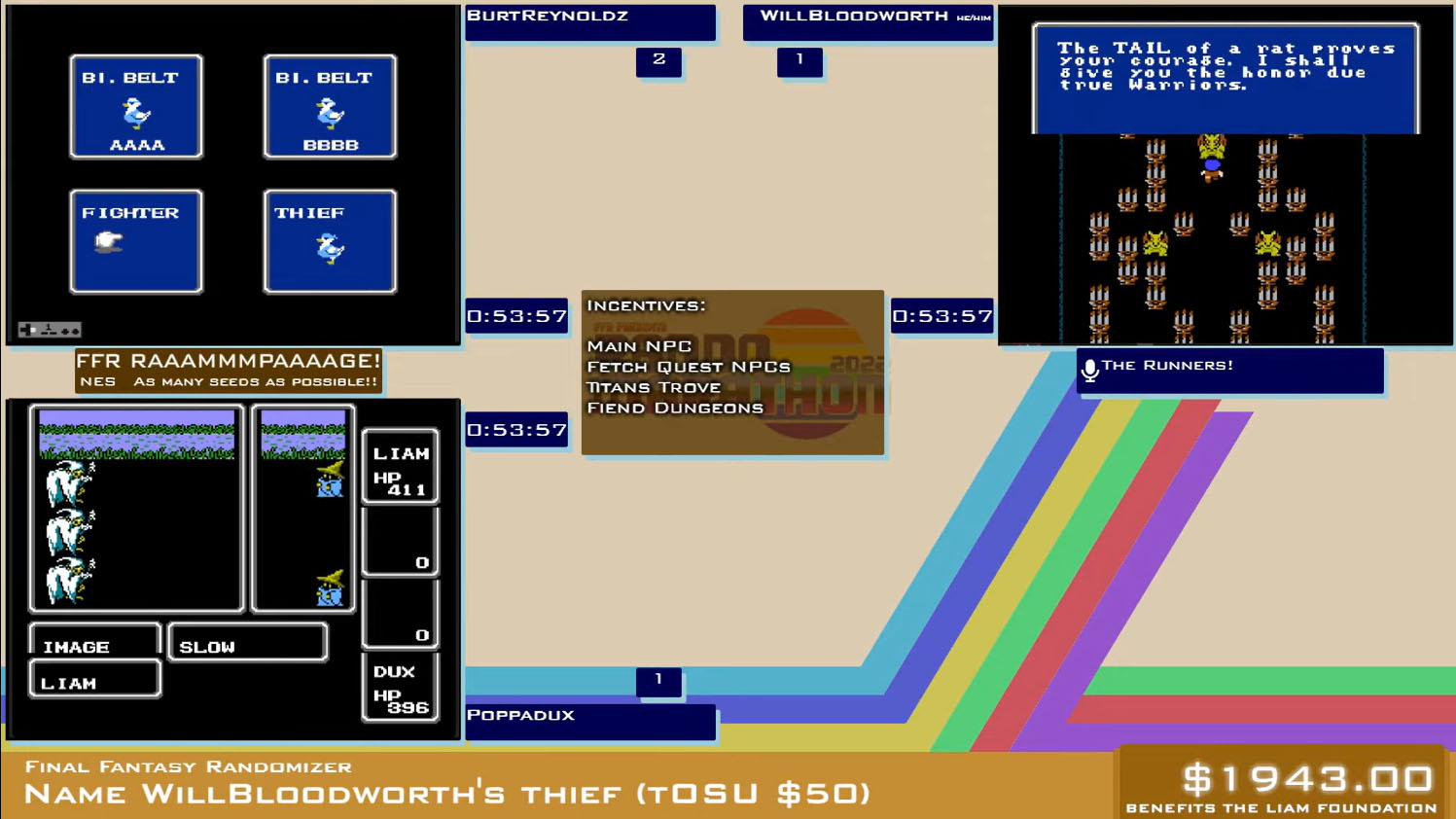 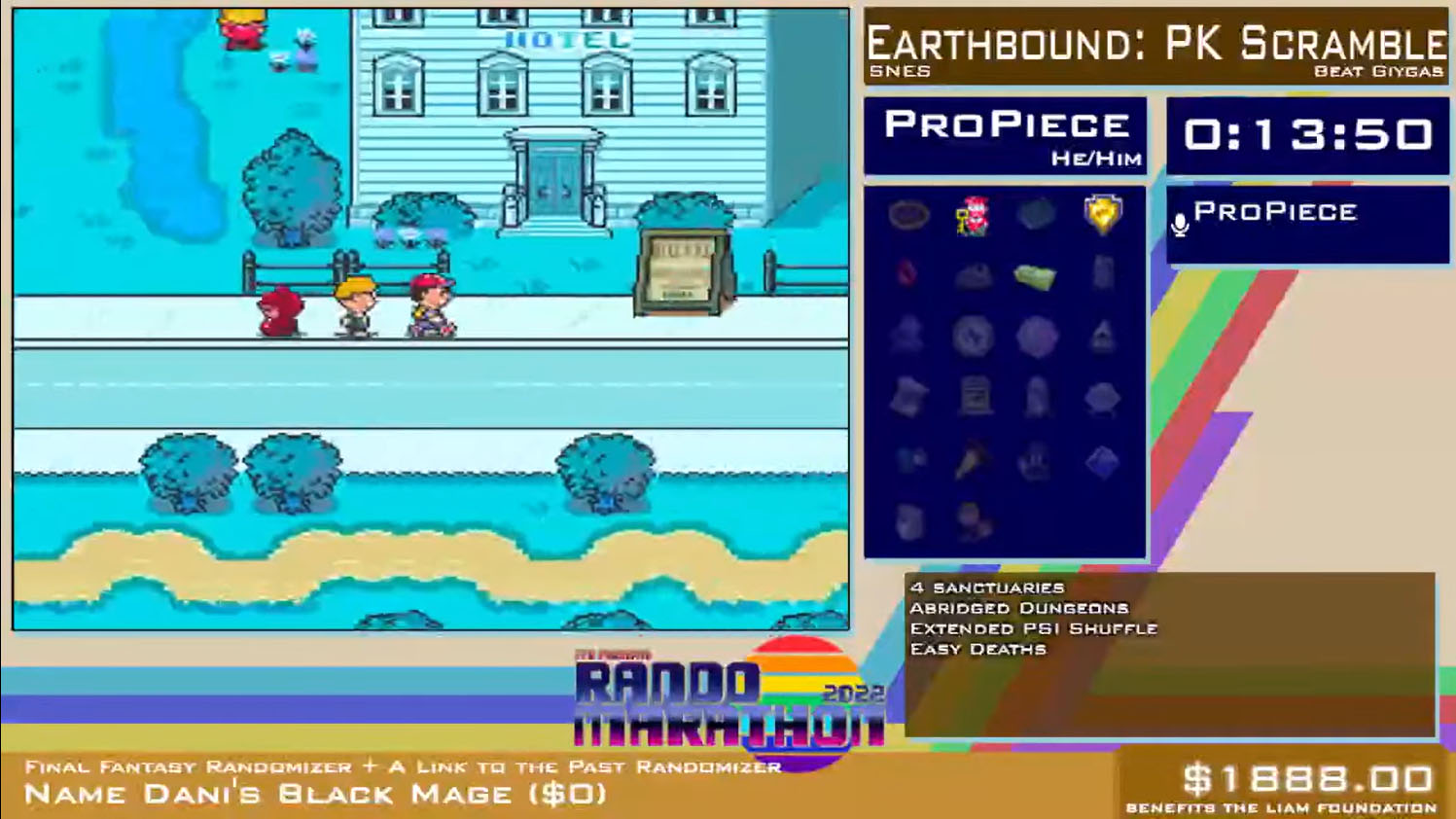 Day two had a few games viewers hadn't heard of, including a 4-player race of Faxanadu Randomizer and a great head-to-head run of Final Fantasy V: Career Day. My personal favorite was Final Fantasy IV: The Lunarian Shuffle, an under-the-radar randomizer that deserves more attention (which is why it was invited to the marathon). Oh, and there was a fantastic 4-player race of Super Metroid / Zelda 3 featuring four of the top runners in the combo-game. Totally a solid race.

Finally, Friday another new randomizer, Final Fantasy Mystic Quest Randomizer, which is a great way to play a game that wasn't appreciated when it came out back in the 1990s but has grown to have quite a following in the years since. There's also a solid double-header of Timepsinner Randomizer, a personal favorite Metroidvania adventure. And the event was capped by a solid race of Metroid Fusion Open Randomizer which quite literally came down to the wire.

So yeah, it was a great weekend. As the videos are uploaded to YouTube I absolutely recommend you check out all the runs. And keep an eye out because, sooner or later, there just might be an announcement for another marathon in the future...