Come Together, Right Now, Over Ring

I have never been so glad I don't do actual scores for movies on this site (letter grade or number) than I am with The Lord of the Rings: The Fellowship of the Ring. This is a movie that, for just about every nerd, geek, and fantasy freak out there, is like catnip for their noses. It has everything you'd want -- a solid script crafted by a caring director with fantastic performances and more practical effects than you can shake a stick at -- that, for anyone looking for a solid adaptation of J.R.R. Tolkien's trilogy, this is the exact movie they always dreamed of. This is about the best adaptation of The Fellowship of the Ring that could exist. 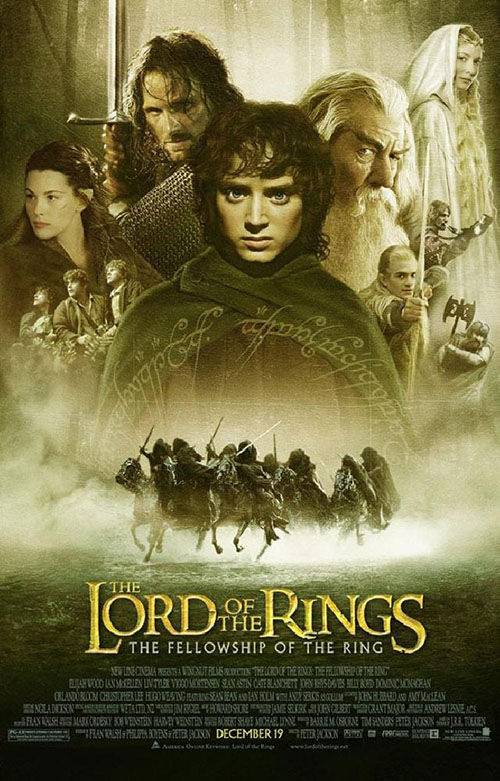 And yet I was also utterly bored by it. This is partly because I've seen the movie before (twice, in fact, with one time in theaters and a second time with the "Extended Edition" that I watched with family on DVD) and have read the books (just once). I know the story, and familiar with all the beats, and know full well what to expect from the film. The thing is, though, that I've watched other films again and again and I can stay engaged over and over -- the number of times I've watched Blacula, for instance, is truly epic and really sad. For some reason, though, this movie just can't keep my attention. It's the pace, or the length of the film, or the subject matter, or all of the above, but what I know now, after my third (and probably final) watching of the first movie of the trilogy is that Peter Jackson's The Fellowship of the Ring is just not for me.

It is a pity, too, because if you're a fan of these stories then this movie really is for you. Encompassing the whole of the first book (with a one-movie-per-book format), The Fellowship of the Ring follows Frodo (Elijah Wood) after he inherits the One Ring (the magical ring that lends Sauron his power and immortality) and realizes he has to take it across the world to Mount Doom so he can melt the ring in the fires of Mordor and save all of Middle-earthCreated by J.R.R Tolkein, Middle-earth is the setting for the author's big sagas, featuring the characters of hobbits, dwarves, elves, and men.. To do that he first has to venture to the land of the elves to meet with the Council of the Ring to decide what, specifically, to do with the Ring and just who among them will take it the whole way. After much bickering (like any office meeting) Frodo take the Ring back and volunteers knowing that he's brought it this far and he might be the only one that can get it the rest of the way.

So his various companions -- hobbits Samwise Gamgee (Sean Astin), Peregrin Took (Billy Boyd), and Meriadoc Brandybuck (Dominic Monaghan); humans Aragorn (Viggo Mortensen) and Boromir (the ever-dying Sean Bean); elf Legolas Greenleaf (Orlando Bloom); and dwarf Gimli (John Rhys-Davies); all aided by the wizard Gandalf (Ian McKellen) -- head across the world, dodging the orcs send by the evil wizard Saruman (Christopher Lee), and diving through the mines of Moria, all before these party breaks up over fears that one (or more) of the heroes may try to take the Ring and use its powers instead of destroying it. In the end Frodo has to head off alone (begrudgingly taking Sam with him), while the other heroes head off to save the other hobbits from the orcs (or, sadly, laying dying). Their grand adventure gets off to a rather inauspicious start, all things considered.

For a film buff, there is a lot to appreciate about how The Fellowship of the Ring (and its two sequels) were made. Just about everything that could be done with practical effects is done that way. It's impressive to see the actors playing the tiny hobbits pass in front of the larger human characters blending seamlessly despite the fact that, in reality, they're films at weird angles and strange distances all to make everything look right. It's a technical feast for the eyes, one that even now, nearly two decades later, is hard to believe. 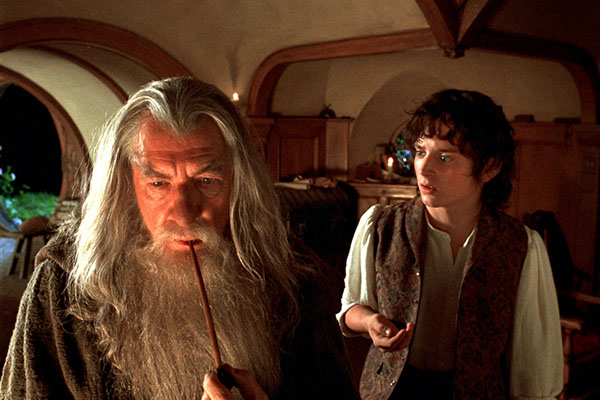 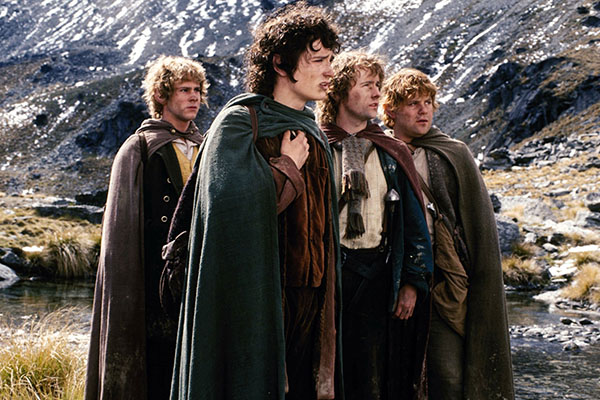 When special effects are used, such as to create the CGI backgrounds of the depths of Moria, that's when the movie struggles a bit. The special effects here are more obvious, with easy to spot matting, bad lighting, and poor seaming of the details. Some of this can be blamed on age, certainly, as effects of this style have improved a lot since 2001. And, to be fair, the later Hobbit movies are even worse looking (just go check out An Unexpected Journey to see truly terrible blending of live-action and special effects). Even when the special effects blow out here it's not so bad that you'd really complain. It just isn't as good looking as the practical effects employed.

The acting, too, it fantastic. Although I haven't ever really been a fan of Elijah Wood he does do a commendable job of Frodo, selling the deep emotions at play - fear, worry, sadness -- as he realizes the depths and dangers of the adventure he's been sucked into. Mortensen, too, is great, gruff yet caring (almost motherly) as Aragorn. I really enjoyed his performance, especially when put up against Wood's Frodo, crafting a pairing that works really well as knight and protected. I liked this dynamic and it helped to carry the movie for me as well as it could.

Part of the problem for me was that outside these two character I didn't find myself caring all that much for anyone else in the party. Merry and Pippin were amusing but pretty flat, lacking much beyond their need for mischief and food. Sam is nice but unremarkable, with most of his growth yet to come in later films, a problem that also struck Legolas and Gimli (I enjoy these two much more in later films). Boromir is the heel of the group and, knowing he dies at the end of the film (spoiler for a nearly twenty year old movie) I just couldn't invest in him. And as for Gandalf, well, he's just a dick.

Gandalf is a character that just didn't work for me here and I think that's because I'd watched through all the Hobbit films before coming to this trilogy. In those prequel films, Gandalf has a habit of telling the party where to go then buggering off for a spell, only to come back and act like the rest of the people were dumb for not keeping up with his instructions. He pulls the same crap here in Fellowship, getting especially annoyed when people start questioning him and acting like the wizard doesn't know everything. Fact is, though, tat Gandalf has proven for 60 years that he's a terrible leader and he's just as bad here. When he falls into a pit in Moria I was honestly relieved. 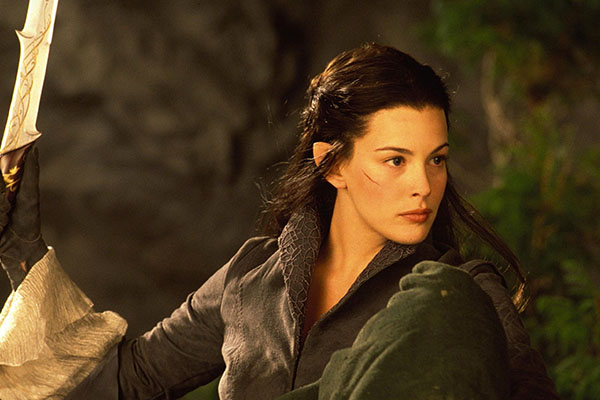 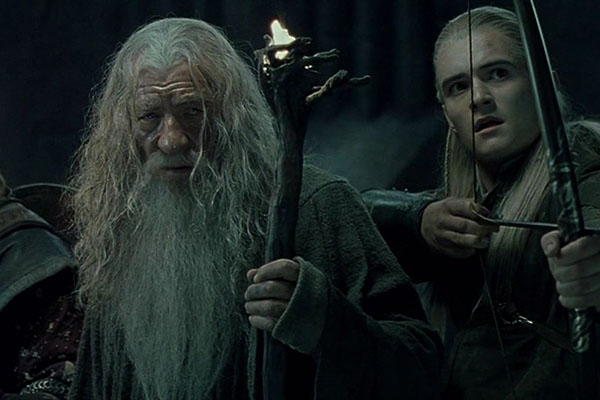 I get why people love these films: they're everything in the books laid out on the screen, practically page-for-page. Fact is, though, that so much of this movie feels like padding. The hobbits have to get from their home to the elves, then out into the world, and they have a bunch of adventures along the way, sure, exploring mines and fighting orcs, but they don't actually accomplish anything. Just as much would have happened, really, if Frodo has told the group, "thanks but no thanks," and hopped a boat in a river near Elfland so he could paddle his way to Mount Doom on his own. The only thing he achieved was a bunch of wandering and leading people around for no reason. That's not a great place to leave your characters in at the end of the first story.

I really wish a good forty-five minutes of the film had been trimmed out. I know that must sound like sacrilege to the fans of these films, especially the ones that love their four-plus hour cuts of the Extended Editions, but this movie dragged so much for me. It was pretty but long, well films but tedious, a great film that just kept going and going until I no longer cared. What I need is an Abridged version of these films just so I can stand to watch them again.

So clearly I'm divided on these films. I understand why people could like them, especially if they enjoy high fantasy more than I do, but this film just isn't for me. Fellowship of the Ring is a movie I just can't enjoy no matter how much I appreciate the work and care that went into it.