Indiana Jones and the Kingdom of the Crystal Skull

Hollywood likes to revive old properties, especially those that have a penchant for making oddles of money. After 1989's Indiana Jones and the Last Crusade, it would be fair to say that most fans never expected another Indy movie in theaters. Sure, there were still regular releases of video games and books, but the movies were the big draw and, for nearly twenty years, the franchise lay dormant. Last Crusade was the high note the franchise went out on and, for most of us, that was enough. 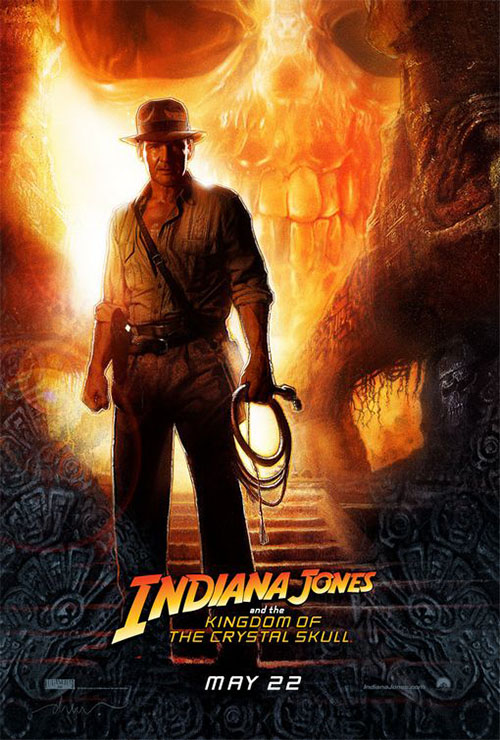 And then, for some reason, Lucas and Spielberg decided to put their heads together and make another film. I certainly wasn't opposed to it in theory because two of the three films in the series had already been good. Better, the Last Crusade proved that the production team knew how to rebound back from a bad film (Indiana Jones and the Temple of Doom) to craft something redeemable and fun. That said, it was fair to be at least a little wary because, as we all know, Lucas had already revisited one of his old franchises, Star WarsThe modern blockbuster: it's a concept so commonplace now we don't even think about the fact that before the end of the 1970s, this kind of movie -- huge spectacles, big action, massive budgets -- wasn't really made. That all changed, though, with Star Wars, a series of films that were big on spectacle (and even bigger on profits). A hero's journey set against a sci-fi backdrop, nothing like this series had ever really been done before, and then Hollywood was never the same., after another two decade gap, and the resulting trilogy had been pretty wretched. Did Lucas have what it takes to craft a good movie after all this time?

Going back and watching Indiana Jones and the Kingdom of the Crystal Skull, the answer is definitely "no". The film is, in fact, pretty bad, but it's the kind of bad that makes you want to like it. There are large sequences of the film that are fun and flashy and work really well. But then something will come up -- the nuclear fridge, the uncomfortably racist natives, the tedious entire third act -- that causes the movie to fall apart once more. It's a film that needed some more time in the hopper, a few more passes over the script, and, just maybe, someone other than Lucas overseeing the whole project.

It's 1957 and the U.S. is deep into its Cold War with the Soviet Union. Indiana Jones (Harrison Ford) and his partner Mac (Ray Winstone) are captured by Russian agents and taken to a secret military base to help them track down a secret treasure: an alien corpse stashed at the base (Area 51) since the Roswell incident. Indy does help their leader, Irina Spaiko (Cate Blanchett), find the alien, but then he pulls a daring escape (that, yes, includes him riding out a nuclear bomb by hiding in a lead-lined fridge, not one of the series' finest moments).

This sets Indy on the case of the aliens and their crystal skulls (the aliens quite literally have magnetic crystals for bones). Aided by a new kid assistant, Mutt (Shia LeBeouf), Indy has to follow clues down into South America to track down a Nazca civilization dedicated to these aliens (that treated them like gods) and stop the Soviets from gaining these crystal skulls for before they someone manage to use the skulls, the civilization, and all its tech to somehow take over the world. 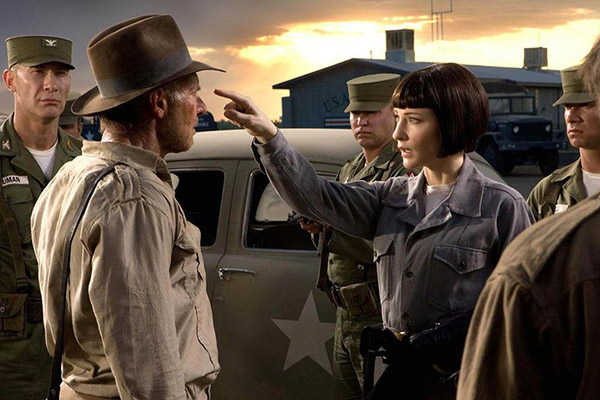 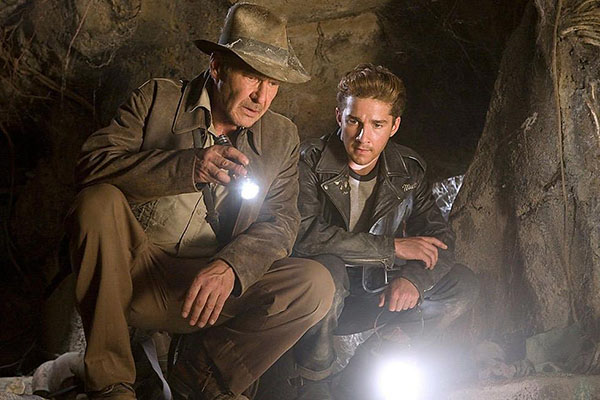 Although the film starts strongly enough -- the encounter at Area 51 trucks along swimmingly for a while -- the film constantly falls over its own feet just as it gets going. Yes, the section of Indy in the fridge is bad, but then he has to deal with a conspiracy to slander his name (from the FBI) while fighting off Russians and learning about this new kid that's wandered into his life, looking for help. The film has some solid momentum and, for a while, seems to revel in the fact that dropping Indy in anywhere instantly causes chaos. It's light and fun and, while a little stupid at time, it seems like another rollicking Indy adventure.

But around the one hour mark the movie loses all steam. This is the point where Indy is easily captured by the Soviets (in much the same way that he was always easily captured by the Nazis in the first and third films). At their camp the big plan is revealed and it honestly doesn't make any sense. See, the alien skulls apparently grant the person carrying them some kind of low-level telepathic field and the Russians think they can somehow use this to, eventually, mind control all of the U.S. All they need to do is take the skull back to its home civilization because, as per legend, returning the skull will grant the person unlimited power.

The problem is none of it is every clearly explained. Sure, we see the skull do things, like make someone stare at it and convulse, or make a horde of (monstrous) ants go around the person holding the skull, but we never get a clear picture of just how the Soviets are going to use the skull. How can this thing power their plans, how is it anything more than a magnetized tchotchke that would look garish in just about any living room? The psychic field it produces can be disturbed by throwing a light cloth over it, so how is this a super weapon?!

The answer would be that the true power lies in the civilization itself but that's a bait and switch even the film seems bored by the time we get to it. The whole last act of the film is a slapdash affair involving a lot of green screens, bad CGI, and a climactic "temple of treasure" with very little pay-off. Sure, there are moments that are fun, but as the film wears on the story, the actors, and the audience all grow bored with the contrivances required to keep the plot on the rails. It just doesn't work. 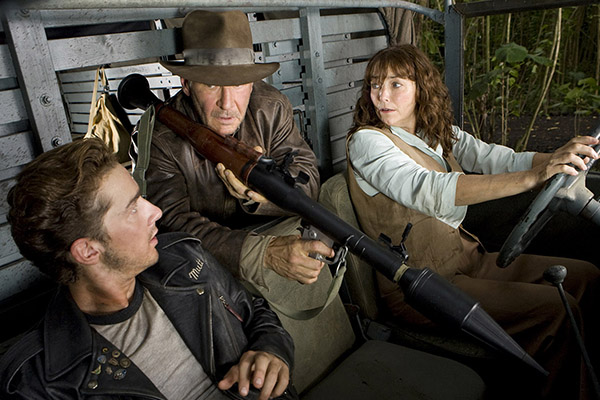 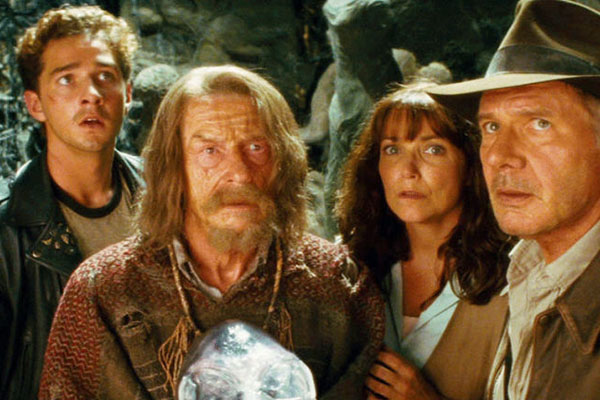 Not helping matters is the fact that none of it feels realistic at all. There are so many instances where characters are getting shot at and magically avoid an entire hail of bullets, or where they take a huge drop down a gigantic waterfall and somehow survive (even though we all know it'd kill them, smashing their bones on the surface of the water and the rocks below). And, yes, there's Indy riding out a nuclear blast in a fridge. This film doesn't understand even basic science, like gravity or bullet trajectory, let alone complicated matters like nuclear physics. It's hard to invest in the film when the characters can bounce back from anything like they're in a cartoon. The realism isn't there and it undercuts all the action of them film, ruining the momentum the film should otherwise be building.

It sucks, too, because there are some great performances in this film. Blanchett, of course, is amazing (because she's always amazing in everything). She deeply invests in her Soviet agent, creating a vampish role from the underwritten character, making her more menacing than the script deserved. We also have the return of female love interest Marion, once again played by Karen Allen, and she's a delight as before. The movie doesn't really know what to do with her, and for much of the movie she's basically just set dressing, but when she gets to act Allen plays Marion like a dame on fire. It's fantastic.

Hell, I even enjoyed Shia LeBeouf, the greaser kid of Marion (who turns out to also by Indy's kid), this despite the fact that he's basically this film's version of Short Round. He fun and sarcastic with just enough attitude to make his character work. He's certainly more invested in the proceedings than Ford, whose Indy just seems bored most of the time now. Ford is the weak link in the cast and he drags down a number of scenes because it's clear he really doesn't care about anything going on in the film (just there to collect a paycheck).

In short, Indiana Jones and the Kingdom of the Crystal Skull is a mess. It has a lot of ideas that don't really mesh together, a collection of scenes that keep the action movie but don't really explain anything. And, once you get past the first hour the film becomes a tedious slog. While I don't think it's the worst Indy movie in the series (that honor still belongs to Temple of Doom for me), I'll probably still choose to believe the series is two films: Raiders and Last Crusade.