Totally How Archaeology is Done

Raiders of the Lost Ark

I have to admit that it's surprising to me that in all the time I've been writing for this site (in any version of it over the last, oh gods, 20 years) I've never once written anything about the Indiana Jones movies. I've touched upon the films when discussing other movies (such as the recent Tomb Raider film), but I never once got around to reviewing Indy's adventures. That's surprising. 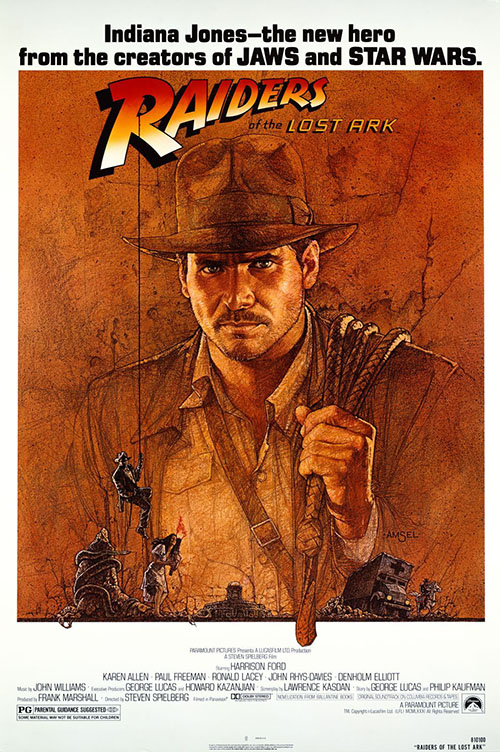 That said, I can see why the adventures fell through the cracks. The Indiana Jones films are well loved, sure, but they don't come out at the frequency of other film franchises, and the most recent attempt to revive the franchise (Kingdom of the Crystal Skull, which we'll get to soon enough) was hated by the fanbase and generally ignored by everyone else. Indy has, in short, fallen to irrelevance in the four decades since he first debuted.

That might, in part, be because, honestly, his adventures are kind of cheesy. I don't mean to disrespect anyone that loves the series -- I'm a big fan of the Indiana Jones movies -- but when you look at the films with a critical eye, and not the rose-tinted glasses of a misspent youth watching these films over and over again, you have to admit they're all pretty silly, deep down. Fun, yes, and rollicking good time, but if you're one of those people that hasn't caught the Indiana Jones bug, you're probably looking at the rest of us wondering, "why?"

One of the first "flaws" with the original film, Raiders of the Lost Ark is the fact that it really doesn't have a story. Sure, it has story beats, but it's fair to say that the plot of the movie is really "Indy finds out Nazi's want the Ark of the Convenant and he does everything he can to stop them." Beyond that the film is essentially just a collection of scenes as Indy travels from one location to the next, trying to find the next MacGuffin he needs before chaos ensues (because everywhere Indy goes choas ensues).

The majority of the story, in fact, is told up front, literally in a classroom, as Indiana Jones (Harrison Ford) and museum curator Marcus Brody (Denholm Elliot) info dump the whole lesson about the Ark on us so we have all the background we need to understand the movie. The rest of the story is told in little character beats, background bwteen characters, but the main plot of the movie is just a chase from point A to point B with lots of carnage in the middle. It's not fancy but it gets the job done. 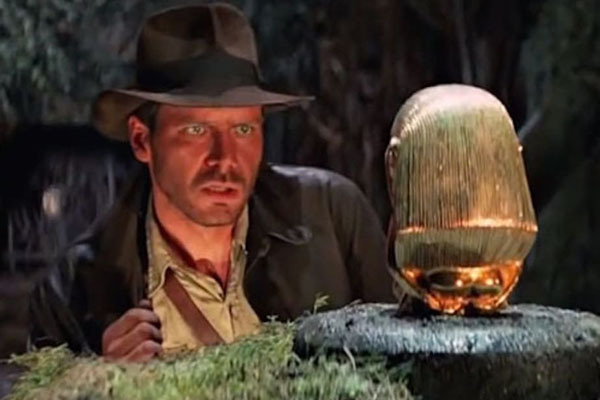 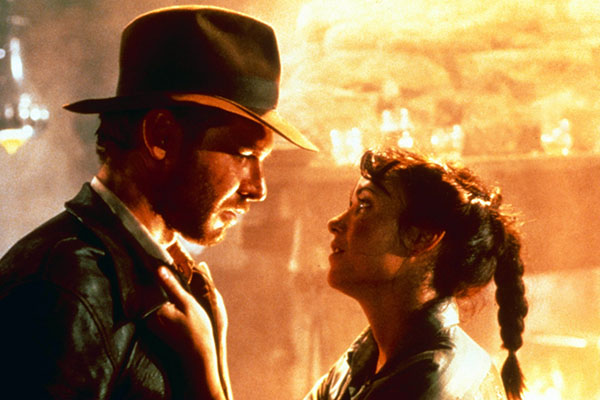 Why the film works is because it has a a care free, throw everything at the wall attitude. The basic construction is simple: Indy shows up somewhere, talks to someone, a fight (or trap, or danger) occurs, and then Indy figures out some way our of the scrape before jetting off to the next location. It's similar in style to the old serials that used to play in movie theaters -- hero goes somewhere, furthers the plot, and then gets stuck in a trap right at the end of the episode, and then people have to come back the following week to see how the hero gets out of it -- just built into a single movie. So every time Indy gets into a dire situation from which there is no escape (example: stuck in the Well of Souls as it slowly fills with snakes), a solution out of left field suddenly presents itself (apparently there's another room in the Well that leads to an undiscovered exit, and Indy is able to break into that room with ease). It's light and fun and cheesy.

Of course, the real magic of the movie is its star, Harrison Ford. Ford had just come off his star making turn as Han Solo (in the Star WarsThe modern blockbuster: it's a concept so commonplace now we don't even think about the fact that before the end of the 1970s, this kind of movie -- huge spectacles, big action, massive budgets -- wasn't really made. That all changed, though, with Star Wars, a series of films that were big on spectacle (and even bigger on profits). A hero's journey set against a sci-fi backdrop, nothing like this series had ever really been done before, and then Hollywood was never the same. series), a role for which his give-np-fucks charm worked perfectly. He affects the same demeanor here, giving Indy a sly grin and scruffy attitude. Honestly, Indiana Jone is just Han Solo with a hat, but that's why he works. This is the kind of tole Ford was born to play, he does it so well. Without Ford at the center, Raiders of the Lost Ark would be a very different movie (see: every Tomb Raider and also all the National Treasure films).

Ford isn't the whole of the cast (even if he is the central figure). Karen Allen gives a winning turn as Marion Ravenwood, Indy's "business partner" (and love interest) for this adventure. Allen is impish and sassy as Marion, a good foil for Indy. The only issue with her character isn't with the actress but the movie itself, taking what could be a very strong female role (especially with Allen at the helm) and then constantly reducing her to a damsel in distress. Allen's performance is different from what the movie wants for Marion, which at times makes the film feel at odds with itself.

ROunding out the main cast are the villains, archaeologist Rene Belloq (Paul Freeman) and Gestapo agent Arnold Toht (Ronald Lacey). These two act as constrast to each other, two sides of an evil coin. Belloq is calculating, a devilish, swaggering art thief who (as he points out perfectly) acts as a shadowy mirror of Indiana, the kind of person our hero could be if he stopped trying to stay on the side of what's right. Toht is the evil Nazi muscle, the mustache twirling sadist (just without the mustache) who screams "homicidal psychopath" every second he's on screen. He's not a very subtle villain but he is a very effective one. 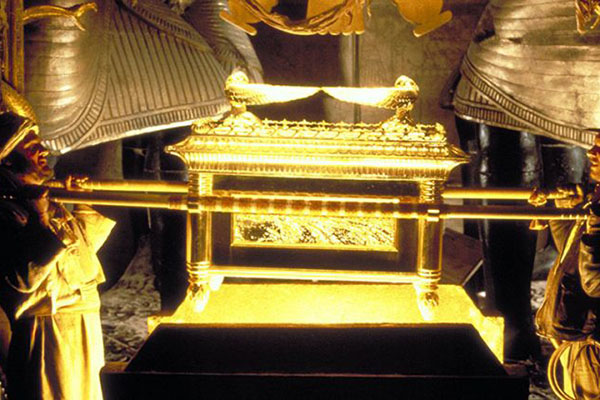 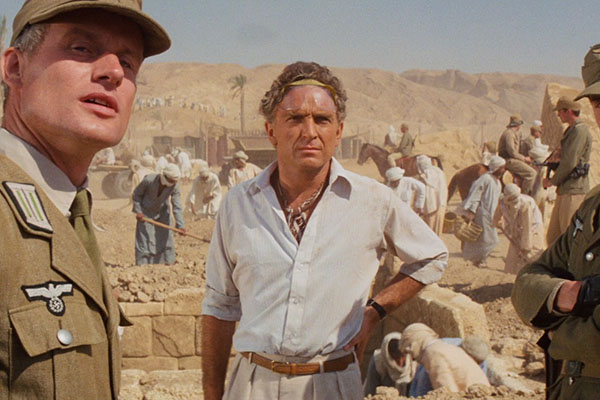 If there is anything that holds the movie down, thought, it's the fact that, in essence, Indiana Jones isn't required for his own movie; if anything, he makes it worse. As The Big Bang Theory and Cracked both pointed out, Indiana Jones doesn't actually accomplish anything and, if he simply hadn't gotten involved, the same things that happen in the movie would have happened anyway. Essentially (and spoilers for a near-40-year old movie), the Nazis find the Ark, take it to a remote place, open it, and then the Ark kills them all. This would have happened whether Indy was there (as depicted in the movie) or not. All he did was run around a lot and fail to keep the Ark out of the Nazi's hands.

In fact, if Indy hadn't gotten involved, things might have gone even worse for the Nazis. Best case scenario they simply never find the Ark (since Indy is the one that actually discovers it) and a powerful relic stay out of German hands forever. Worst case scenario for the Germans, they actually do find it and instead of taking it to a remote place (as they do in the movie) they elect to take it back to Berlin and end up wiping out the entire city, Fuhrer, SS elite, and all. There's a scenario on the table where, if Indy had just stayed home, all of the Third Reich is wiped out before WWII even happens (since this movie takes place in 1936 AD).

Of course, that's not something you're supposed to notice in the heat of the moment. That's a long-term look at the movie, taking the film as a whole when, obviously, it's supposed to be viewed as a single, united serial. Each little adventure is its own set-piece, it's own singular moment in the film designed to carry you from one moment to the next without thinking too hard, and the film does that very well. Between the adventure, the mystery, the intrigue, and Ford's performance, the film lifts you up and drags you along as Indy causes carnage in every place he visits. It's glorious.

Raiders of the Lost Ark isn't a perfect movie but it is a hell of a lot of fun. It's a great way to kill a couple of hours while intrigue and antics happen on screen. If it were anything other than the movie we were given it wouldn't have that cheesy charm of the old serials (that Lucas and Spielberg wanted to honor). It's exactly the movie it needed to be for the yarn it wanted to tell and, because of that, it's fantastic.