Even Worse Than the Last Time

I love Slasher movies. I've been writing on this site for over a year now so I think my cred in this department is at least somewhat established at this point. I like how dumb they are, how cheesy they can be. I enjoy the colorful killers and the elaborate kills. But, more than anything, I love the tension that builds, the waiting for the scare, the moment when a kill happens and that tension releases, or the times where something funny and the moment gently deflates. It's a rollercoaster and the best Slasher flicks know how to gear that ride perfectly. 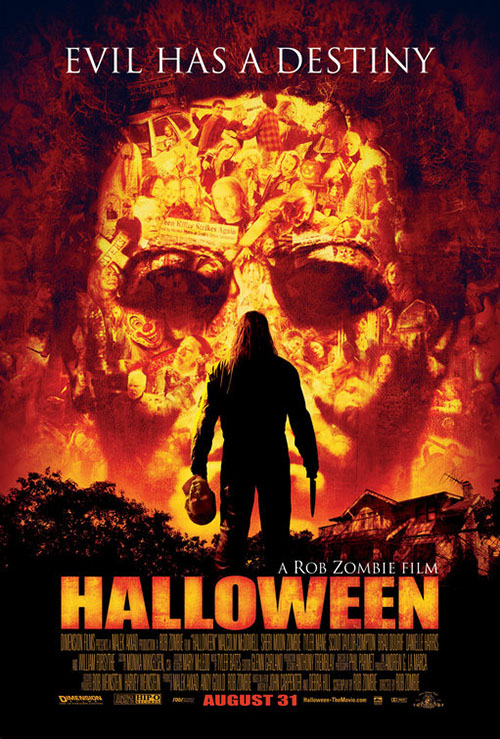 I mention all this because the second Rob Zombie film in the HalloweenThe franchise that both set the standard for Slasher horror and, at the same time, defied every convention it created, Halloween has seen multiple time lines and reboots in its history, but one thing has remained: Michael Myers, the Shape that stalks Haddonfield. series, 2009's Halloween II, takes the series right out of the Slasher genre and deep into Torture Porn. Zombie completely loses all sense of what made the original film (and and of its half-way decent sequel) work, instead wallowing in hiw baser instincts, creating a movie that isn't just a bad movie but one that's unbearable to sit through as well. It is, without a doubt, the worst film in the series, and considering how bad some of them had been, that's pretty damn impressive.

While the original version of Halloween II picked up the events right after the original Halloween, giving us an extension of a single frightful night, Zombie's sequel jumps two years ahead after the events of his remake. We find Laurie (Scout Taylor-Compton) living with best friend Annie (Danielle Harris) and Sheriff Lee Brackett (Brad Dourif), although this potentially happy family unit is, understandably stretched thin. Laurie suffers massive PTSD, as well as dark dreams of Michael, of killing, and of potential suffering (this includes at least one protracted dream sequence that may or may not have actually happened). She lashes out at those around her, unable to take comfort or love from those closest.

Of course, hanging over the heads of everyone is the fact that Michael's body went missing that fateful Halloween night two years ago. Everyone assumes the body was just misplaced, but we know the truth: Michael is alive and, eventually, he'll come back to kill once more. And, sure, enough, two years later Michael returns, cutting a swath through Laurie's life because, somehow, he knows who she really is -- his baby sister -- and he wants to kill her. Or maker her like him. Or have them both die to they join their mother in Heaven. Honestly this whole movie is muddled so I really don't understand what the plan was. 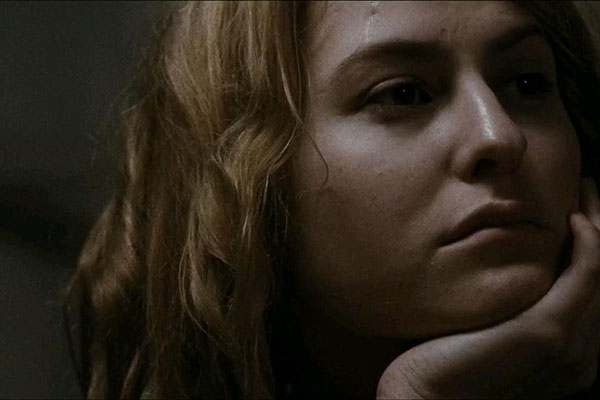 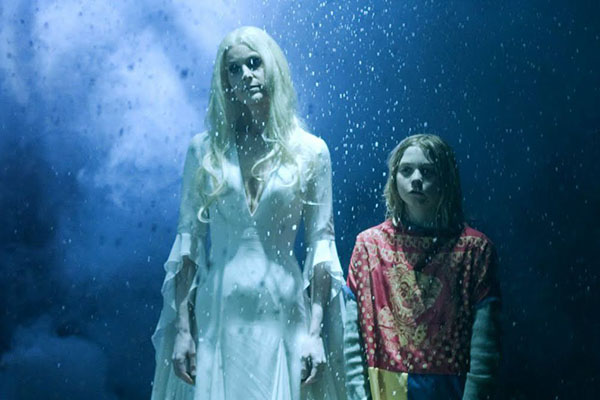 Like with his previous film in the series, Zombie spends a lot of time trying to get into Michael's head. Just having the killer be "The Shape" isn't good enough for Zombie; he has to try and explain why Michael kills. In the first effort that meant giving young Michael a history as a burgeoning serial killer, a history that really didn't have much bearing on the killer he would become (he killed a male buddy, and then a father figure, and then a random guy in his house before moving on to his sister -- if anything he should mostly kill dudes from that M.O., not nubile teeange girls). Here, because Michael is already a hulking, silent giant his development comes in the form of seeing his dead mother (and a child version of himself) who eggs him on to kill and kill again.

I might have been able to buy this; Michael has visisons, like some people hear voices, and they uge him to kill. Sure, why not. Where the film loses me is that, somehow, Michael also develops some kind of psychic connection to Laurie. Somehow the traume he put her through ended up making her more like him and now they're connected, right down to her eventually also seeing the dead mother she never knew (and a child version of Michael). This is plot device ripped from Halloween 5: The Revenge of Michael Myers, except there it was Michael was linked to his niece instead of his sister. If they'd made a third one of these were they going to have a new version of Jamie, his niece, for Michael to stalk. God, I'm glad that never happened.

The psychic connection was stupid in that movie and it's stupid here. It had a magical connection to the film as a way to gloss over any meaningful character development. Laurie is Michael's sister so a propensity for evil could run in the family; there's no reason to have Michael psychically connected to the girl, as if controlling her with his psychosis, when she could just as easily go bad on her own. Instead of really trying to get inside Laurie's headspace as she slowly descends into evil, the film says "psychic bond" and then shrugs and walks away.

Not that Laurie, or really anyone else in this film, is likable enough that you care if they're good or evil, let alone if they live or die. Like in the previous film, everyone here is ugly on the inside, awful and depressing people that make you loathe humanity in general. There's not a happy person in this film at all, not one person that's nice or sweet or even kind. Everyone yells at each other, abused each other, and generally hates everyone around them. Ugly, through and through. 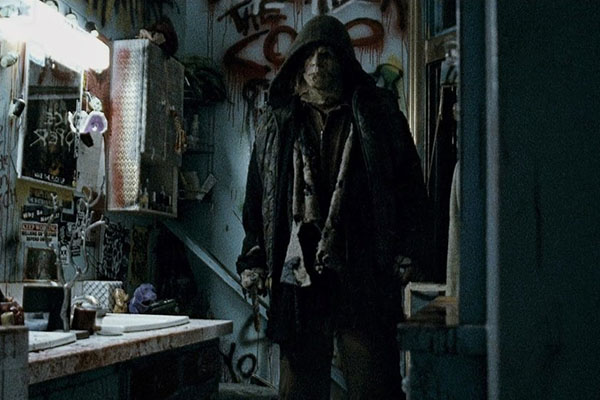 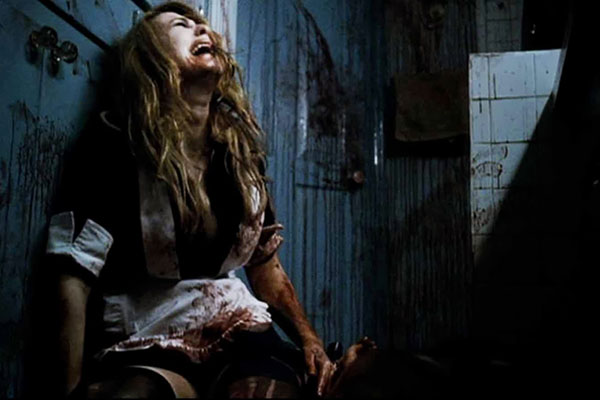 But then, of course, the whole of the film is ugly, right down to its gore. Every character that gets attacked isn't just killed; they're brutally savaged, torn apart or slashed to bits as Michael goes for maximum carnage, over and over again. There aren't any scares to be had here as the film doesn't have time to build up tension. Every kill is the same: Michael shows up, Michael kills, and then the camera lingers, on and on, as the gore and viscera pile up. It's disgusting, but worse, it's boring.

That's the reason I hate Torture Porn: not because of the gore (which I honestly enjoy) but because it's not scary. "Oh, this person is trapped by Jigsaw with a collar fused to their neck and there's a bomb. Oh no, their head exploded! Ooooooh." You can see every kill coming a mile away and there's essentially zero chance that a person can escape their torture once they fall into the trap. And it's the same problem here: Michael shows up, and no matter what someone does you can already tell how they're going to die, right off the bat, so it's just a matter of waiting to see how long they suffer for. It's desinsitizing and tedious.

For whatever reason Zombie declined coming back for a third film in this awful ugly series, and I think we should all be thankful for it. Instead of having to suffer through another awful Halloween III (god, just the thought of it makes me long for Halloween III: Season of the Witch instead) the series went silent once more until 2018's 40-year anniversary film, Halloween 2018, and in comparison to this flick that movie is high art.

We get a two-fer from the coroner drivers at the start of the movie, with disrepsecting the dead on top or one of the ambulance drivers wanting to have sex with a dead girl. Icky, to say the least.

The two drivers get their comeuppance quickly when they crash into a cow in the middle of the road (although the physics of the crash itself are off when you watch it, looking less like they hit an animal than just a concrete road divider). The driver dies on impact while the guy in the pasenger seat gets to wait for Michael to crawl out of the van before getting his head lopped off.

Twenty. Both drivers of the ambulance (although technically one of them died because of his own stupidity and not from Michael), two nurses, a security guard, seven yokels, two Halloween partiers, a cop, two of Laurie's friends, and Loomis, plus Michael and Laurie (since this didn't get a sequel I think we can count them both as dead). Although, honestly, it's hard to know how many of these count since some of them may have been part of a dream squence. Plus there's a whole pile of bodies at the hospital early in the film that just doesn't make any sense in context and maybe have been part of the dream sequence, if it was a dream sequence. This movie is a mess.

Note, the version that was watched for the review was the Director's Cut. Apparently the theatrical version has a different ending where Laurie doesn't die, leaving open the possibility of a third film (which, thankfully, we were spared).