And Then Some Idiots Die...

It's hard to call any film in the Slasher genre "pointless". The job of a Slasher film, really, is to do nothing more than present a bunch of teenagers, a killer, and then watch the two come together in a series of kills as the body count rises. If a movie does that it had, by definition, done exactly what a Slasher movie can do. And yet we can't ignore the fact that Slasher films are still "films" and, as such, they have to provide at least a bare minimum of filmic quality. If a movie in the genre, either as part of a long-running series or just a stand-alone film, failed to justify itself in any meaningful way, the film has to be considered a failure. 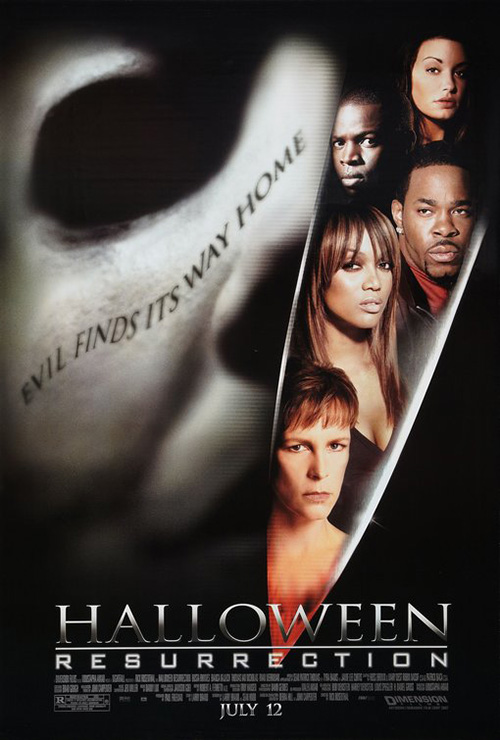 By that metric the eighth HalloweenThe franchise that both set the standard for Slasher horror and, at the same time, defied every convention it created, Halloween has seen multiple time lines and reboots in its history, but one thing has remained: Michael Myers, the Shape that stalks Haddonfield. film (and second in this reboot of the series, following Halloween H20: 20 Years Later) can certainly be considered "pointless". If the goal of the seventh film was to restart the franchise, to shake off the cruft that had built up, and refocus the series on the dynamic between Michael Myers and his sister, Laurie Strode, then Halloween: Resurrection completely and utterly fails on all fronts as a continuation. And even if we just view it as yet another Halloween film it's still a failure because it's just so bad. So very bad.

It's been three years since Laurie (a returning Jamie Lee Curtis) seemingly killed her brother, Michael (at the end of the H20). We find Laurie in a mental institution, though, because apparently it wasn't Michael she killed but a paramedic that Michael had dressed up as himself, damaging the guys vocal cords so he couldn't speak, knocking him unconscious, and shoving the mask over his head. The guy was only trying to defend himself and Laurie killed him, so she got shoved in a joint for the rest of her life. And, of course, Michael then eventually reappears to kill her, once and for all, before wandering back to Haddonfield to hang out in his house.

When he gets there, though, he finds a crew of people setting up for an Internet streaming shoot. This crew, Dangertainment, want to capitalize on Michael's fame by filming six kids as they wander around his abandoned house. What the crew, and then the six suckers, don't realize is that Michael is back so, as the night of filming progresses, he steadily picks off each and every member of the crew. It'll be up to the last few survivors to take out Michael (for a while, at least) and save themselves before Michael finishes the job once and for all.

There are a number of issues with Halloween: Resurrection, not the least of which is that it's a poorly constructed film, but we have to start with the story of the movie because, really, this whole affair makes absolutely no sense. For starters, the setup of this movie takes a lot of mental gymnastics to be believable. We're supposed to accept that somehow Michael was able to attack a paramedic, knock him out (which isn't something Michael ever does), strip him, dress himself and the paramedic again, and then sneak out of the school without anyone noticing a horribly burned guy carrying a knife. I mean, that would require everyone around him to be completely oblivious, but it also means that Michael acted completely against type since he's never, not once, been shown to care about planning. He acts and reacts, always on the day of Halloween. That's his only motivation, his sole job. 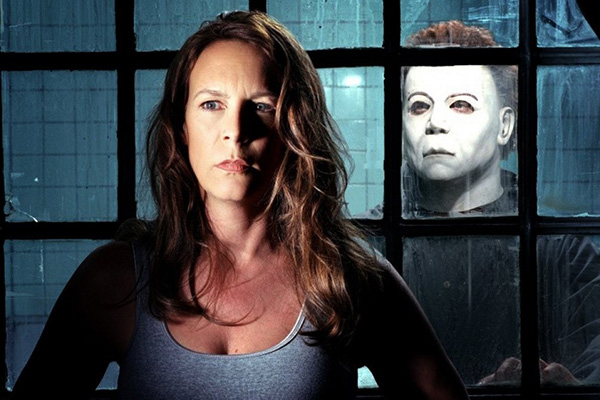 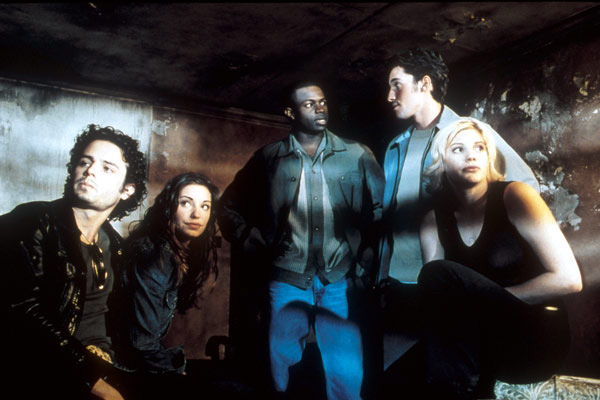 If he wanted to go after Laurie, that's fine, but he wouldn't create the whole cover story for himself, and then he certainly wouldn't wait another three years to act. He's just sit for a year (so he could go on Halloween again), find her, kill her, and be done with it. And if she was too hard to target (which, since she was in police custody, might be a possibility), he'd go over her son (who we saw in the last flick), or her cousin, or anyone else he could first because he really, really wants to kill his family.

That then speaks to the next issue. By keeping the second film, Halloween II in continuity, H20 kept the modus operandi that Michael is driven to kill his family; if he's successfully finished off Laurie he would immediately go after her son. While he might be interested in killing people in his old house, he'd only care if the house was his destination, and he'd only go back there if Laurie's son were also there. Otherwise, who cares about the house? Michael has a road trip ahead of him.

The movie doesn't address any of that. Instead it comes up with a story about Internet streamers and a mass murderer that stalks them. I actually don't hate this part of the story even if critics back in the day lambasted it. The judgment of the era was that "no one would watch a bunch of kids streaming their pointless exploration of an old, spooky house." Now, though, that totally seems like something people would watch -- with the advent of Twitch (and other streaming services) I've seen plenty of stupid crap get streamed (hell, there are popular streams of farms where the audience can just watch chickens hanging out in their coops). Six kids wandering through a house is absolutely something that would be successful, especially if they started getting killed one by one. That's appointment viewing.

To try and sell this story the film actually hired a surprising number of up-and-coming actors for the film; seriously, I haven't seen such a good collection of soon-to-be stars since Dazed and Confused. The cast includes Tyra Banks (supermodel), Katee Sackoff (Starbuck in Battlestar Gallactica), Luke Kirby (Lenny Bruce on The Marvelous Mrs. Maisel), Sean Patrick Thomas (co-lead in Save the Last Dance), Thomas Ian Nicholas (the kid in Rookie of the Year), and Busta Rhymes (I hear he might rap occasionally). That is a stacked deck and they are absolutely and completely wasted in this film. 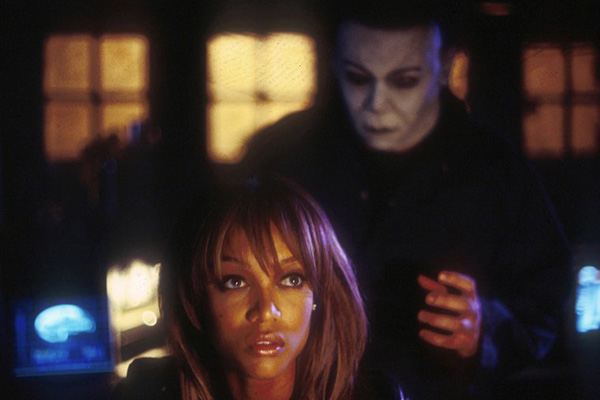 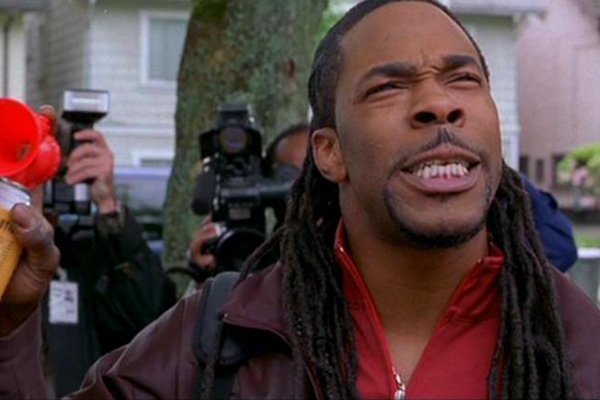 How can a cast like this be wasted in this film? It's because Halloween: Resurrection is the least scary film in the entire series. Director Rick Rosenthal (who basically reached his peak as a director with this film) has absolutely no clue how to stage horror. Every single one of this kills is a rushed job, often moving from setup to kill in a matter of seconds. That's when the director even bothers to show the kill, often enough simply cutting away from the action to show some comedic bit off to the side instead. The movie has no sense of how to handle its subject matter so a film that should zip along as we watch, from a remove to a remove (since we're seeing the stream at times, and the audience reacting to it), these people steadily (but creepily) get killed off. It should using the filming devices at its disposal (headsets of the kids, cameras mounted in specific locations around the house) to accentuate the scares. It does none of that.

I think the greatest issue, though, is that the film completely lacks a compelling lead to carry the story. All the actor's I've mentioned are side characters while the final girl, Sara Moyer, is a complete void. We're not really given any story for her, we just know she hangs out with much more interesting friends, and then somehow she's the lucky one to survive as if she's getting rewarded for a lack of personality (she's not interesting enough to be a "slut" in the movie's own logic). It doesn't help that she's played in the least interesting way possible by actress Bianca Kajich, rendered into a total and complete void because her star didn't have anything to add to the part. It's a total waste.

There are any number of ways this film could have gone, even hobbled by the fact that Curtis wanted to end this series one film earlier and only returned here so she could be killed off (and never have to return to the series again, a plan that didn't entirely work out considering Halloween '18). Without Laurie the film still could have followed her son, could have found some way to invest in persona;l stakes for the characters and make us care about what was going on. Instead it was lazily filmed by a terrible director with no inspiration as to its story or goals. There's no reason for this eighth film to exist beyond, "hey, let's bring Michael back again for... reasons." It is, in short, pointless.

I guess gluttony since one of two sanitarium security guards killed off early in the film (see below) stops in the middle of a search for a missing patient so he can buy a snack from a vending machine. Remember, always stay in pairs and if your buddy stops for a snack, stop with him.

We could count the paramedic that apparently died at the end of the last movie, but that feels like a cheat. Instead, we go three years forward to the start of this movie. Two security guards are killed in quick succession when Michael breaks into the sanitarium housing his sister, Laurie. One of the guards is beheaded, the other gets his throat slit. I'll say this for Michael, he is efficient.

Not counting the paramedic from the last film (which, again, is a cheat), we have ten: the two security guards, Laurie, two Dangertainment crew members, and five wannabe reality stars.