It's been years since I last watched the whole of the Thin Man series -- I actually think it's been over 20 years, after HBO did a marathon of all the films to celebrate New Years one time -- but I knew we were going to really start hitting the bottom of the barrel before too long. Even though I hadn't watched these films in years (even after buying the complete set a little while ago) I had seen one other person run through the series and they'd commented that this film in particular, The Thing Man Goes Home, was where you could see the noticeable drop on quality of the films. 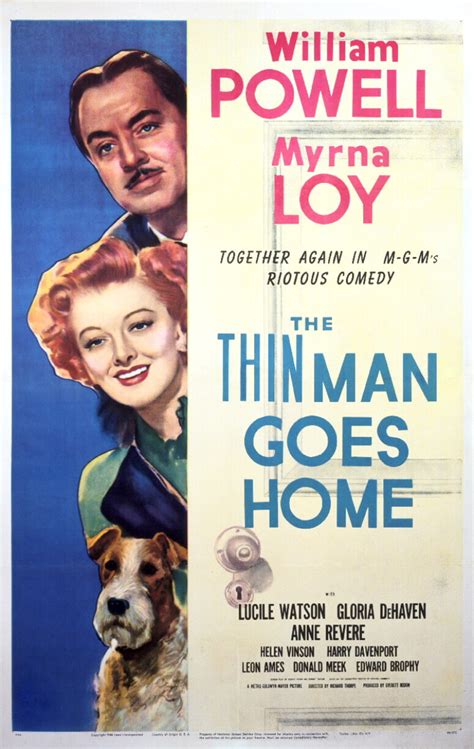 You can understand why, of course: at this point most of the creative staff behind the scenes had left the productions. Writers Hackett and Goodrich had left after the third film, Another Thin Man, with original novel author Dashiell Hammett had also left soon there after, while director W.S. Van Dyke had died after making the fourth movie, Shadow of the Thin Man. The people who had given the series its distinctive voice and look were all gone so anything that came after was going to feel like a copy of those works instead of the real deal.

That makes The Thin Man Goes Home the first film to really feel like a studio picture, something made to line their balance sheets and try to milk more money out of the franchise than a film made simply for the love of the characters. Hell, when original actress Myrna Loy (who plays Nora through all six films) said she didn't want to come back for a fifth movie (as she wanted to focus her time on the War efforts), the studio even thought about recasting her. The fans threw a fit, of course, and the studio backed down, but you can see their thought process: it doesn't really matter who is in the film, or working on the film, at all so long as "Thin Man" is in the title.

Watching the film it's hard not to feel like all the joy has been sucked out. Yes, Nick (William Powell) and Nora (Loy) are here but they hardly feel like the same characters anymore. Where the fourth film minimized Nora contributions to the plot, this fifth film shoves her almost completely out of the picture at all. She used to be Nick's equal, a partner in his cases (even if, time and again, he tried to keep her from getting involved) but now she's reduced to little more than his sidekick and hype man. Nick, meanwhile, hardly seems to care for his wife at all. She's there to be by his side but he has more important things to do than banter and show his love. This film just feels off all around.

Things start off reasonably enough with Nick and Nora heading to Nick's hometown, Sycamore Springs, to visit Nick's parents, Dr. Bertram Charles (Harry Davenport) and his wife, Mrs. Charles (Lucile Watson) -- and it says something very clear about the film that the mother doesn't have a full name while the father does. While he's there Nick has to tell people, time and again, that he isn't working on a case but, of course, eventually a case falls right into his lap (as I've noted before, where Nick and Nora go, murder follows). 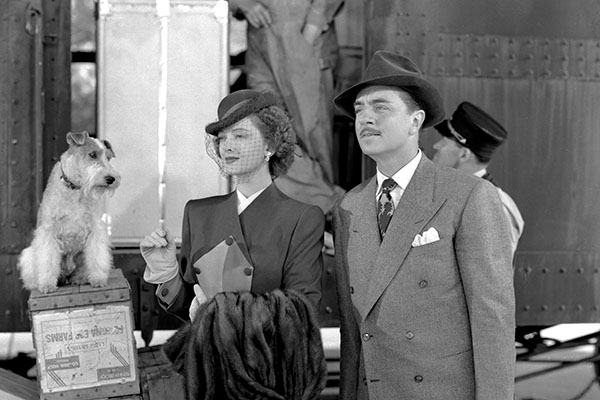 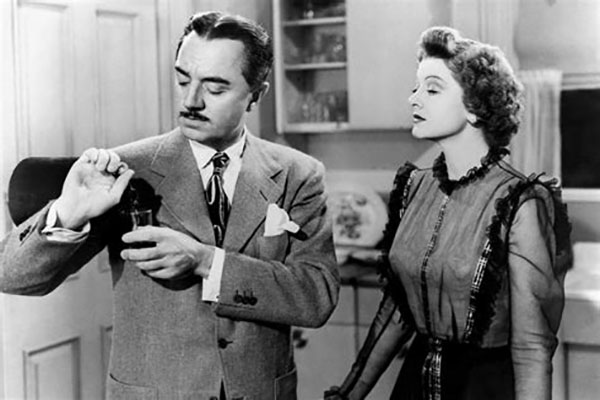 As it so happens, a young factory worker, Peter Berton (Ralph Brooks), comes to see Nick but, right in front of him, is shot dead (with no killer in sight). Soon after, someone tries to break into the Charles house although no one is quite sure why (as it turns out, it's to get a painting that Nora had just bought). Nick, suddenly suspicious, automatically picks up the case and starts investigating. This puts him in opposition with all the leaders of the community who don't want a detective digging around in their business. But when Nick realizes just what the kid was killed over, and how it could even affect the war effort, there's nothing he can do but solve the case.

So let's begin, as noted above, with Nick and Nora. As in the previous films the two actors are about to do a lot with the chemistry they have. What's lacking between them is that spark of life in their words. They're a handsome couple, but all the barbs and bite and jokes that used to fly between them are completely missing here. Writers Robert Riskin and Dwight Taylor don't have the same grasp of their characters that the original writers had. Hell, they clearly didn't understand the dynamic between Nick and Nora at all since, where before they used to be equals, now Nick ends up acting like he patriarch of their household (and, in a particularly galling instance, even bends his wife over his knee and spanks her for being mouthy). Their dynamic is all wrong here.

The film also lacks the same pace of the previous movies. The mile a minute patter is gone, of course, but also is any sense of urgency, of danger, or actual adventure. This is a pretty slow film that wanders its way through the suburbs as Nick saunters along with his case. The push, the verve that really made the previous films catch fire is missing here. Part of it, honestly, I think is because they set it in small town suburbs when Nick and Nora always used to go out -- to races, to boxing matches, to bars and clubs. The zesty high life is missing here, replaced instead of a sedate visit to Nick's home.

The case itself is actually halfway interesting. Like, it's not deep, and even though I couldn't remember the plot of the film at all I had an inkling of the "why" of the murder even if I didn't have a guess at the "who" of it. The paintings are a big give-away and, maybe I've just watched enough crime flicks that I could see something of where it was going, but I could tell right off the bat there was something hidden under the painting (and, as it turned out, paintings). If you could that with the prominent mentions of the War effort you probably can start figuring out where the plot is going. 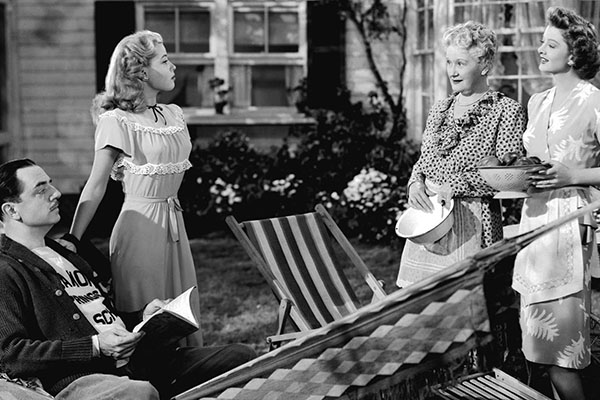 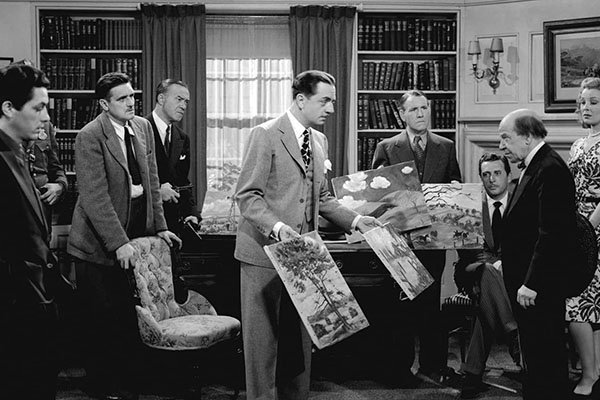 Really, though, the story behind the film is just there to let Nick wander around and do his thing. Again, not Nick and Nora, and not with their delightful banter, as none of that is here. Instead it's just Nick, doing his case solving, while Nora stays at home like a dutiful wife (and neither of them drink at all). Frankly, if this hadn't had "The Thing Man" in the title, I might have been hard pressed to even know it was part of the series. It's doesn't take place in the same kind of locales, it doesn't have the same energy, and the characters hardly resemble their former selves. This is a dim shadow of the previous movies (and one of them even had "Shadow" in its title) and that just feels sad.

This very well could be the worst the series gets but we do still have one more film to go before this is all over, so let's hope it gets better from here and ushers the series out strong. That said, this fifth film at least turned a profit for studio MGM, whereas the last film does not, so I'm not exactly going in with high hopes.