A Dashing Detective and His Lovely Wife

We don't review a lot of classic films on this site, especially ones that don't somehow encroach upon one of our usual "nerdy" genres, such as sci-fi or monsters. Even then, we usually look at them to help put the latter media into context with modern content also released with those characters. It's rare we actually take a look at a film or series from the Golden Age of Cinema just for the sake of watching that media, no strings attached. One of those, though, is the The Thin Man franchise. 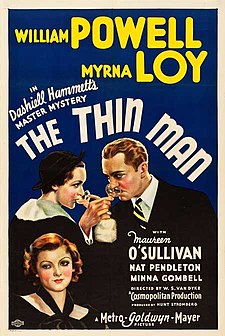 The Thin Man series, which ran for about 15 years in the mid-1930s and 1940s, is not a series that gets talked about very often at this point. The last time I heard reference to it was in the context of the fast-paced dialogue of this movie, and even then that was because the dialogue from this series served as a template, apparently, for the dialogue in Gilmore Girls. Well, and I guess there was that movie Nick and Norah's Infinite Playlist which just borrowed the names of the lead characters from this series. But, on its own, who's really heard of The Thin Man outside of deep-cut cinema buffs?

That's a pity because this series, especially the early films before series fatigue obviously set in, is a pretty solid romp through the detective genre. It's witty, its funny, it has a winning central couple, and it gets by a lot on the easy charms of its cast and setting. And, fact of the matter is, these films don't have the problem I have with a lot of early-period cinematic releases: namely, their pacing is really pretty solid. Light, fast, and funny, these movies have the perfect combination to make them watchable any time you want just a jazzy bit of fun.

This first film certainly has the most work setting up everything about the series (that, at this point, wasn't expected to come along after). Before we get to our central couple who lead this series, though, The Thin Man has to first get into the details of the case, and that means actually setting out our titular "thin man". We're introduced to Clyde Wynant (Edward Ellis), a business man and a bit of a mean old cur who, nonetheless, has a soft spot for his daughter, Dorothy (Maureen O'Sullivan). Dorothy, as we learn early in the film, is betrothed to Tommy (Henry Wadsworth), and, with Clyde's blessing, begin to plot their wedding. Clyde, meanwhile, heads off on a business trip, never to be seen again.

Months later, Dorothy runs into Nick Charles (William Powell) at a club. Nick once worked for Clyde way back, as Nick used to be a detective -- he gave up that game and retired when he met and married rich sociality, and industrial heiress, Nora (Myrna Loy). But Dorothy's pleading, and a few sultry details of the case, soon, lure Nick out of retirement and he, along with his wife, begin prodding at the edges of the case until, soon enough, he has an idea of what happened and what fate might have befallen the Thing Man. 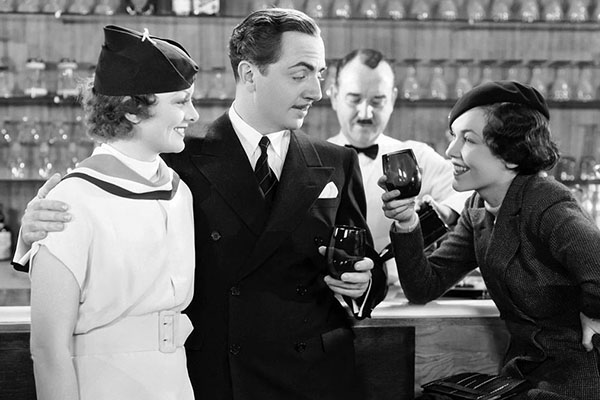 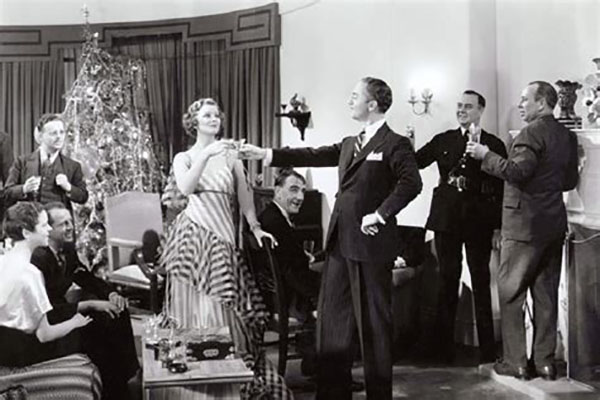 I've watched this film a couple of times in recent memory: once when I picked up a boxed set of all the films (there are six total and we will be going over all of them) and then again just now for this review. I can say, over multiple viewings, that film does hold up, if for no other reason than the banter between Nick and Nora works so well. The writing and acting for these characters is effervescent and funny, and that comes from the fact that the writers specifically played up the banter of the couple in the script and then the actors were encouraged to ad-lib and get creative to heighten the humor for their scenes.

There's a live, energetic quality to this film, and that's in large part due to director W.S. Van Dyke. Van Dyke specifically wanted the cast to stay fresh, to not over-rehearse their lines or lose the spontaneity of the moment, so he'd often put them in a scene, have them film once, and then cut and send it to print without doing any further takes. The actors were said to not always be happy with this way of doing things, as it put a lot of stress on their initial performances, but it did keep the film lively.

Also helping is, of course, the natural charisma between William Powell's Nick and Myrna Loy's Nora. These two play such a fantastic couple, loving and endearing with just enough of a bite to sell the dialogue between them. It crackles on screen, with the verbal fencing the two perform, back and forth, even in mild scenes. But it's playful banter, and that comes across; this is a couple madly in love with each other, not one purposefully trying to hurt each other, and the humor always comes across as endearing, not spiteful. That goes a long way here.

For the time period, and the social mores of cinema during this time, this film is probably about as action packed as you can expect from comedic-noir film. It's not a hard-as-steel detective story, although there are three murders and a fair bit of gun play. Despite being based on a Dashiell Hammett novel, this film has a light touch. What violence there is in the movie is a few moments of fisticuffs but you never worry that any of the main cast is in danger. It's certainly more "adventure" than "action", to be sure. 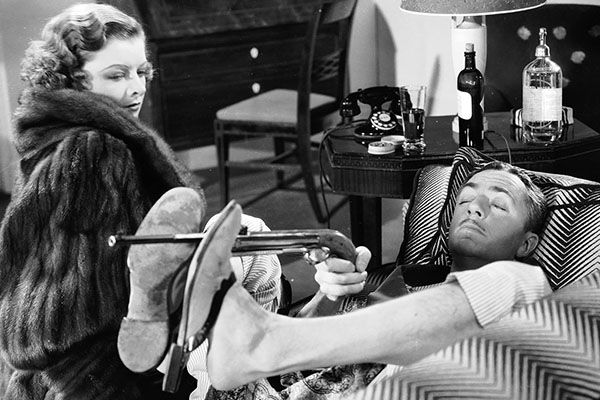 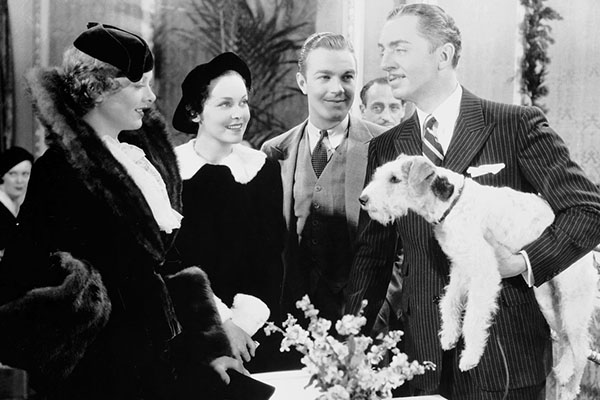 In fact, if there's any actual flaw in the film I'd say its the case itself. It's not bad, per se, but there are so many twists and turns and motives for all the characters that it's hard to parse out ahead of time who might be behind all the crimes. Lead actor Powell said that he had no clue what was actually going on in the final, climactic scene where his character solves the case over a dinner party, and that seems pretty fair. The actual solution seemingly comes out of nowhere; if there are clues laid out for it you'd have to be much better at spotting them in his genre than I was.

That said, I don't think a weak case really holds this film back as, truly, you're here for the lead couple and their fun, playful charm. This is probably the most relaxed detective series we'll ever cover on this site, but it works so well. This is the rare series that, for me, does hold up after all these years, and in large part that's because this first film does such a good job of establishing the characters, their setting, and the intricacies of how the films should work. For such a foundation to a series, The Thin Man still feels lighter than air.