City College Must Be Stopped

Community is a show known for being "meta", for commenting on itself as well as all of pop-culture in general. While the first season of the show had its meta moments -- the mob movie pastiche of "Contemporary American Poultry", the war movie/Die Hard parodying "Modern Warfare" -- it's the second season of the show that really cemented that shtick. And, at least here, it really works. 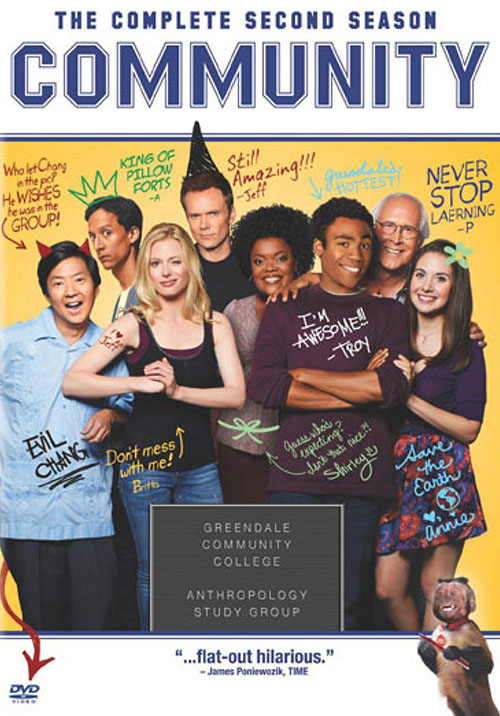 It's possible to make a show just about people going to school and attending class; certainly there have been plenty of teen shows that cover that ground well. Community, though, never really wanted to be about the school, or the classes, but the really weird things the students could get into in a college that never could quite get its act together. The first season of the show quickly disposed of most of the "will they/won't they" trappings between Jeff and Britta, and freed of the need for romance the second season quickly breezes into some really weird area, finding new heights for its meta commentary that helped the show become laugh-out-loud funny.

Take, for instance, "Basic Rocket Science" (one of my favorite episodes of the series). It starts off amusingly enough with the Dean upset with out favorite study group after they submit a flag called "the Crossroads of Learning" to the school's flag design contest (which was an actual Online poll the show ran). The flag looks like an anus, even saying "E Pluribus Anus" on it, and it, of course, wins the competition (because that's the Internet for you). As punishment, the Dean forces the crew to wash and clean the school's new (very used) KFC-branded space simulator (to explore the 11 Herbs and Science of Space). This then quickly leads to the space simulator being towed (by rival school, City College), leading to a spot on perfect Apollo 11 parody and all kinds of laughs.

Or there's "Aerodynamics of Gender" which is half Mean Girls-esque parody as Abed and the girls of the study group go on a tear destroying all the "bitches" in the school, and half Secret Garden pastiche, with Troy and Jeff finding a secret trampoline which leads them to inner peace (and a Neo-Nazi). This episode has a number of unexpected twists all baked right into its weird parodies, and it works so well.

The fact is that the show develops the world of the show so well that it can get away with parodies like this and they don't feel weird or strange considering the show. Not all the parodies were as well as others -- "Epidemiology" is an amusing Halloween-set zombie episode with a story that doesn't really go anywhere -- but they all, by and large, feel of a piece with Greendale Community College. 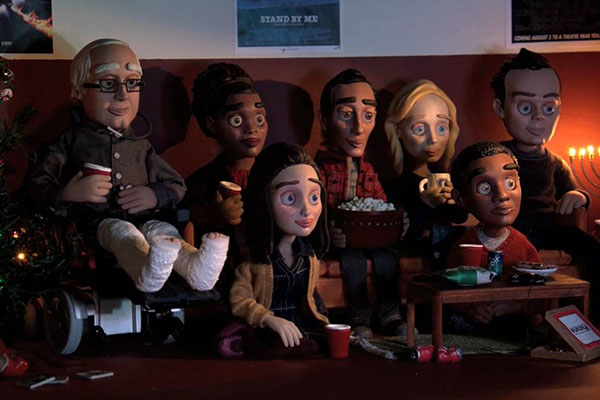 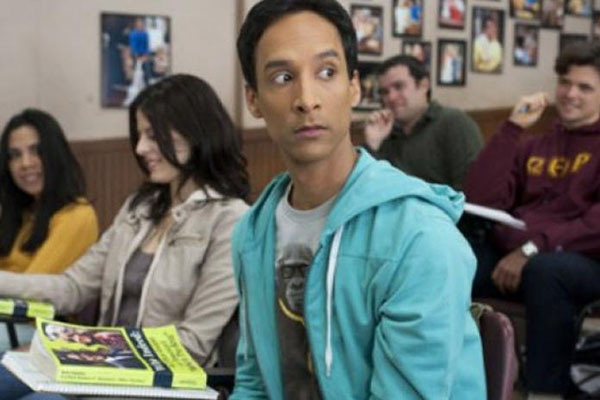 When the show is just focusing on being weird and doing strange, narrative diversions, it really clicks in season two. There are some plot threads that don't work and maybe hold the season back from greatness, especially on repeat, binge viewings. For starters there's Chevy Chase's character, Pierce Hawthorne. He was a boorish ass in the first season, a character played very well by Chase (which is no knock against him as he could, at times, find the humor in the boorishness). In second season, though, Pierce was turned into a kind of villain and the amusing, if horrible, traits of the character were blown out to tell a story about how mean and nasty the character was. It sometimes worked well, using Pierce as a catalyst to further the story, but other times his shtick would wear thin and you'd just wish the show would focus on anyone else.

Take, for instance, "Advanced Dungeons & Dragons" (one of the best D&D stories ever done on TV). In this story we're introduced to Fat Neil, a very depressed (and, yes, larger person) who is on the verge of suicide until Jeff and the group decide to play a game of D&D with the guy. Naturally, they don't include Pierce because he's a jerk, but when Pierce finds out he gets really mad, demands to be in the game, and then makes a mockery of everything the group wanted to do. This leads him to split off from the group and work against their adventure, culminating in a great climax where Neil finds his own inner strength and combats Pierce's dickishness. And all of it is wrapped in a fantastic fantasy adventure told only in words. This is Pierce used properly.

On the flip-side we have "Intermediate Documentary Filmmaking" which uses Pierce poorly. Here, Pierce fakes a major medical emergency all so he can pretend to be dying. He gives each person in the group a "last bequeathment" which, in each instance, is just something to screw with them. He's the villain of the whole piece and by the end of the episode he's learned nothing while the rest of the group forgives him for no good reason. Sure, by season end the group has had enough of his shit, but that comes much later in the season. We still have a ton of episodes of Pierce being a jerk, like in this episode, doing little to further any kind of story.

Pierce, though, is still treated much better than poor Chang. After losing his professorship last season, Chang ends up penny-less, homeless, and then goes completely crazy. It's a complete character assassination of a character that was weird and dark but still sane in first season. He gets a lot of laughs due to this change in his character, to be sure, but by the end of the season you're just tired of this version of change and wish, against all fact and reason, they they'd just reset him back to the character he was before. 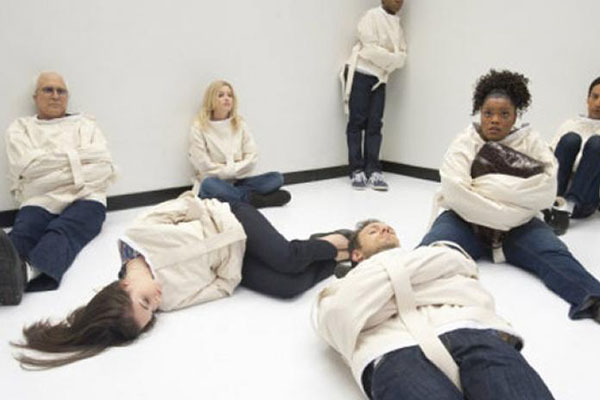 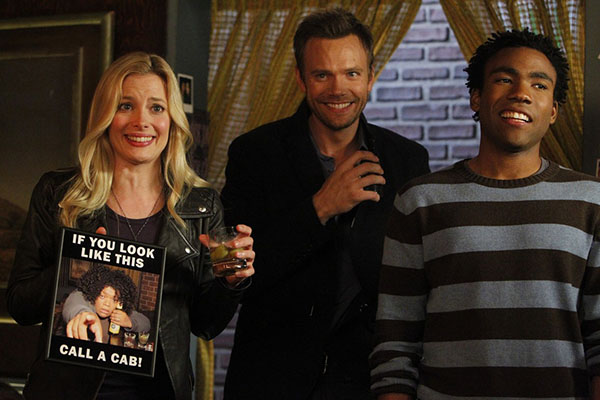 Season season is, without a doubt, uneven. There are so many high marks in the run, plenty of great episodes that, honestly, I could list just about all of the episodes from the season here and make a case for every one of them. And yet the characters themselves have some issues and, in the case of Pierce and Chang, the problems are enough to ruin a handful of episodes.

Despite this, though, the highs of the season certainly outweigh the lows. Going in I remembered this season as the high point of the run. Having watched it again I can see how I formed that opinion but now I'm really hoping the next season or two are able to get even better, redefining just how good this show could get.

I've already mentioned "Basic Rocket Science" above, and that's a contender for this slot. Instead, though, we'll go with this season Christmas episode because of just how far it pushes what Community could do. In this episode Abel realizes he's viewing the whole world as if it were a Rankin Bass holiday special (plastic model puppets and all). We then take a journey through Abed's own Christmas wonderland to find out why Abed is seeing the world this way and what's causing his distress. It's a fun, deep, and at times heartfelt story that still manages to be strange and meta.

Going back and watching this episode for the season review, I was struck by how well this story is constructed. Yes, the Rankin Bass-style puppetry is spot on, but it's more than that. The convention of the story is that everyone in the study group is helping Abed via group therapy, and the story works both as the characters sitting around a table talking out what they're doing as well as the "real" Christmas adventure we're watching. It's a feat on multiple levels and a really solid story all around.

One of my big issues with Pierce is that the show uses him to make easy gay jokes. It's like with Kevin Smith when he says, "the idiot character says the homophobic stuff but you aren't supposed to listen to him because he's the idiot character." It works for Smith because he makes movies and his gay jokes are infrequent. Pierce, though, makes gay cracks all the time, and he's in every episode of the show, so very quickly the show starts to feel like maybe the gay jokes are intended, as if there's a thread of gay panic running through the writers' room.

Nowhere is this more prevalent than in "Early 21st Century Romanticism" where Britta makes friends with a girl she thinks is a lesbian. The other girl isn't gay but thinks Britta is. The two then eventually start competing with each other, unknowingly, to prove they're less homophobic, which only leads them to act gayer towards each other. it's like the show is trying to comment on its own gay panic undertone but it does it in the most ham-fisted way possible. It's not funny, just uncomfortable, and it ruins a major portion of this episode.

The B-plot about Tory and Abel courting the same woman is cute and sweet but it doesn't really go anywhere. Troy and Abed are a great duo and I like seeing the two of them work together in weird ways, but this is a B-plot that needed a stronger A-plot to balance it out. Sadly, this episode just can't support anything it's trying to do.