It All Comes to an End

And now for the grand finales of the Harry PotterFirst released as a series of books (starting in the UK before moving worldwide), the Harry Potter series gained great acclaim before even becoming a series of successful movies. Now encompassing books, films, a prequel series, and a successful two-part play, the series even now shows no end in sight. series, which, honestly, isn't all that grand. Don't get me wrong, this movie has an epic scale to its set-pieces and it does, on the whole, find a way to nicely tie up all the threads of the whole series. That said, it doesn't feel like a single, cohesive movie, just half of one. More of a season finale than the final film in a series. 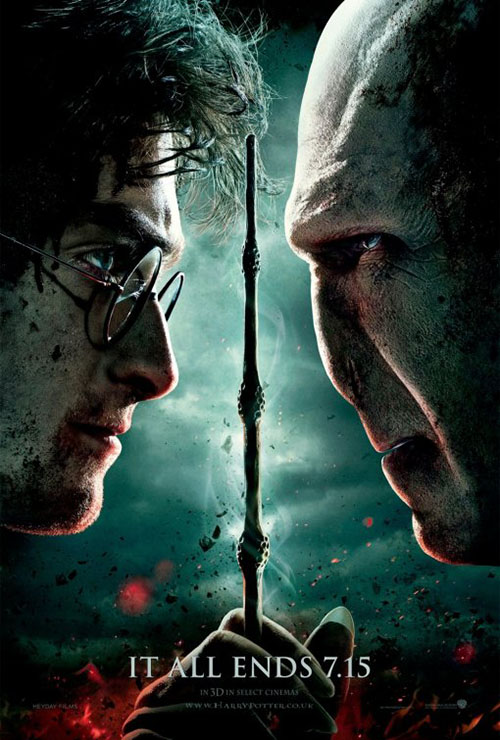 Of course, this is all due to Warner Bros. bone-headed decision to take a single story, Harry Potter and the Deathly Hallows, and split it down the middle into two different movies. As a single, unified production, like a long, Lord of the Rings-style extended edition, this whole two-part movie would feel nice and complete. When taking each on their own, though, neither really add up to the sum of their individual parts.

Having collected, and destroyed, the fourth of the horcruxes near the end of Deathly Hallows, Part 1, Harry (Daniel Radcliffe), Ron (Rupert Grint), and Hermoine (Emma Watson) also had to escape from a squad of Death Eaters led by Bellatrix Lestrange (Helena Bonham Carter). During that encounter, Bellatrix let slip that a relic Harry and Co. had in their possession, the sword of Godrick Gryffindor, was supposed to be in her vault at the goblin bank, Gringotts (a supposedly impenetrable bank). Bellatrix is so upset over this that, once Harry and Co. escape, they realize this might mean another horcrux they need to destroy is also at Gringotts. This leads to them sneaking into the goblin bank, with Hermoine polymorphed to look like Bellatrix, to steal the item and put Voldemort one step closer to death.

This then leads into the final long act of the story with Harry and Co. sneaking into Hogwarts to find the last two horcruxes (which Harry learns about due to his connection with Voldemort): Voldemort's familiar, the snake Nagini, and the diadem of Ravina Ravenclaw. If Harry and his crew and destroy these last horcruxes, Voldemort should finally die. Finding them, and taking them out, might just prove to be a problem once Voldemort shows up at the school with his army. It's time for war for the fate of the Wizarding World.

Let's not undersell this: the big climactic fights between good and bad wizards are great. They have a propulsive energy to them, staged in big, swooping shots with blasts and bursts flying left and right. It's like Michael Bay's vision of a chaotic wizard war, explosions and all, just filmed better and without so much choppy editing. These battles are brilliant (to use the British version of the term), giving us all the wizardly battles we'd been promised since the start of the series. This kind of combat is the exact reason why the students, year after year, were taking defense against the dark arts classes (well, allegedly since we barely ever saw them in class), and seeing them using all their skills in such grand set-pieces is so satisfying. 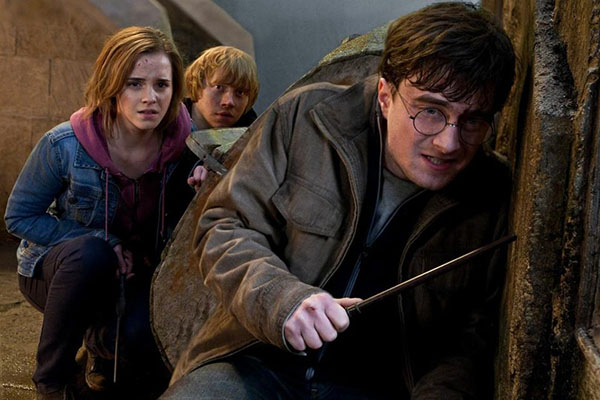 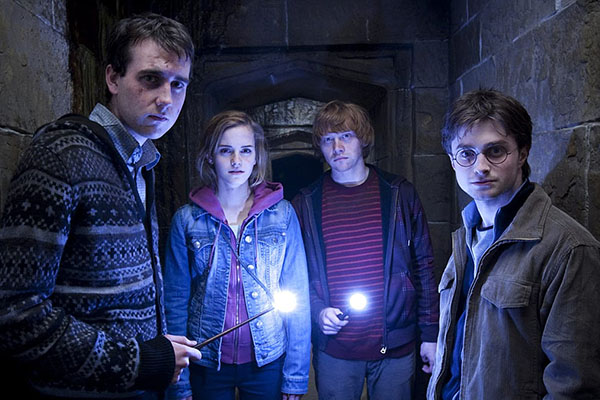 That said, much of the movie around the climactic battles is lacking. This film relies a lot on Harry and is crew just stumbling into the next solution, having someone (often Voldemort) let slip the information they need to find the next horcrux, to solve the next riddle. Harry was given the quest to find the final horcruxes and destroy Voldemort, but Harry is little more than a chess piece moved from one square to the next. It's everyone else that actually does all the research, all the info gathering, all the necessary steps to actually solve the mystery. Harry's just there to take take the last step (and sometimes not even that). Harry isn't exactly passive in these movies, but so many events in this film (along with the rest of the series) happen to him and not because of him.

It's been noted elsewhere, but if you look at the progress of the series from wide perspective (and not focused solely on Harry), the real hero of the series would seem to be Neville Longbottom (Matthew Lewis). Like Harry, Neville's parents were killed by Death Eaters, another set of victims of Voldemort's crusade of evil. Neville goes to wizard school and eventually picks up his parent's mantle, joining with Harry during the many fights throughout the series. Neville gets to have a satisfying arc, growing from passive runt to the one student willing to stand up to an army of Death Eaters on Hogwarts's doorstep (in this final movie). He even gets to take the last, key action that finally destroys Voldemort. Harry might have a connection to Voldemort, but Neville is really the chosen one from a lot of perspectives, and he actually earns it. The movies focus on Harry when a hero with actual agency is standing off to the side.

Even among the core three characters -- Harry, Ron, and Hermoine -- Harry is the less interesting choice for central hero. Hermoine, in contrast, makes a much better case for real hero of the trio. Unlike Harry, she doesn't have any magical parents, having been a natural witch born to muggles. Every power, every skill she gains is one she earns, and it's her natural abilities, her smarts, that get her through the day. Harry often has everything handed to him (whatever relic or bit of information is needed next) but Hermoine has to earn it all. Honestly, Voldemort has more reason to hate Hermoine and go after her parents than he ever did Harry's. Remember, Voldemort hates all muggles and muggle-born wizards. While Harry's mother, Lily, was muggle-born, Harry comes from two magicians. Hermoine, meanwhile, has no "natural" wizard blood in her, she's a full "mudblood" (to use the slur). If Voldemort should have attacked anyone as a babe, it should have been Hermoine.

The problem with the series, that this movie on exacerbates again and again, is that Harry is the least interesting part of his whole series. If you want a great wizard, you have Hermoine. If you're looking for a solid hero, you have Neville. There are great romance stories (Ron and Hermoine, Neville and Luna) going on around the character, but the story between Harry and Ron's sister, Ginny (Bonnie Wright), lacks any development (or chemistry). Daniel Radcliffe is a great actor (as evidences in later films, like Horns and the truly bizarre Swiss Army Man), but the films never give him any material to really sink his teeth into, and that's because Harry, the central figure of the series, is such a bore. 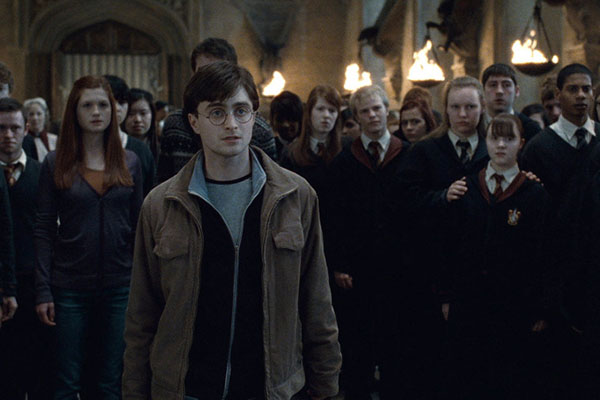 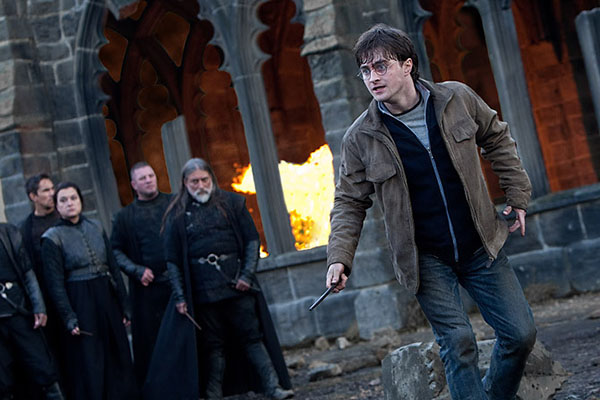 So, despite this being the epic final confrontation between Harry and Voldemort, I ended up caring more about all the side characters. Professor McGonagall (Maggie Smith) gets some great moments in the film, balancing the steely protector mode she's shown throughout the series with some tender and lighter moments as she tends to her students. The real MVP of the movie, though, is Carter and not because of her performance as Bellatrix (which is always good in a crazy way). Her standout sequence is when the actress is playing Hermoine playing Bellatrix, and the actress really nails the mannerisms of the younger Watson. There's a reason the actress has been nominated multiple times for Academy Awards.

The sights and sounds of the film are also great. As noted, the action is filmed in a fluid manner without any of the choppy camera work or editing common to Hollywood action sequences. There's loving care in the long, cinematic shots of the battles, with everything shot in such a way where the action is clear even as so much of it is happening on-screen. This is couple with assured special effects with CGI that's vastly improved over the horrid effects the first film featured. This series has evolved so well over the course of its eight movies, and from a wide perspective it comes to a satisfying, action-filled conclusion.

I just wish this last film felt like a complete movie. It's essentially one-and-a-half acts of a larger story (by design, of course) and because of that it's not a movie I'd ever go back and watch on its own. There are some sequels that are worth seeing individually (such as Empire Strikes Back and Terminator 2: Judgment Day), but Deathly Hallows, Part 2 would not make that list for me. Due to its construction it's both the last act of a single movie (taken in conjunction with Part 1) and a whole epic series, but I would never watch it just on its own (unlike Prisoner of Azkahban or Half-Blood Prince). It's just not complete enough to stand on its own.

Does the film cap off the whole Harry Potter series? It does, but I don't mean that in the way fans probably expect. This final film highlights what's great about the series (the magic, the action, and adventure) along with what still doesn't work even eight movie in (too much necessary material left unexplained, a passive hero that always has other people doing everything for him). As the final embodiment of the series, Deathly Hallows, Part 2 has everything that's good and bad about the series all at once. In perfectly encapsulate and finishes the series, but it never rises above the problems inherent in the material since the very first film. 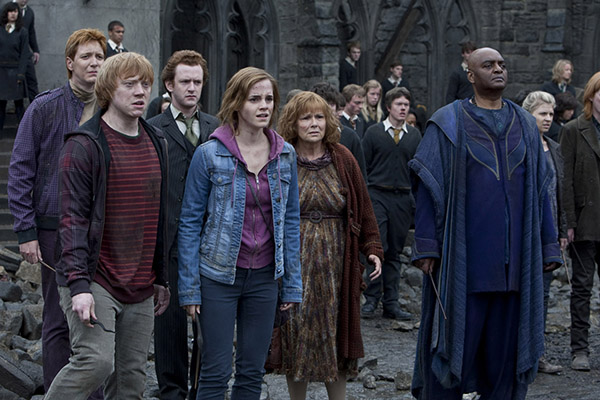 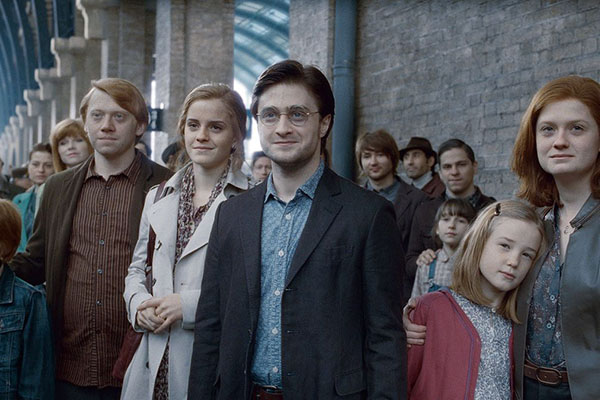 I did enjoy Harry Potter and the Deathly Hallows, Part 2. It's satisfying enough, with plenty of great moments scattered through the run-time. I just wish this whole series, start to finish had been handled better, done in such a way to improve on the source material and create a cohesive, throughly explored world. Maybe down the road Warner Bros. will reboot the series, taking it to HBO or Hulu or whatever as a eight-season continuing series (ala Game of Thrones but without all the incest and rape). This film series was a good first attempt at adapting the books, but there's definite room for improvement.

Put another way: if you're watching this whole series and are at the last movie, obviously you're going to watch this one. There's nothing in this film to convince Harry Potter haters to give the series a second look, but it's a great film for the already inducted faithful. For someone like me, on the fence and never really that into the movie series, I await the next inevitable attempt at adaptation.