We're On a Quest For God(s)

What is the point of a prequel? It's an honest question, one that any artist needs to answer before they commit to creating an earlier edition to an existing work. Often prequels are used to answer "questions" the previous films had left unanswered, even if the "questions" being raised really didn't need answering. For instance, did we really need to know how Han Solo got his last name? No, but Solo: A Star Wars Story still felt like telling us that tale. This is the issue with prequels: they need to have a good reason justifying them. 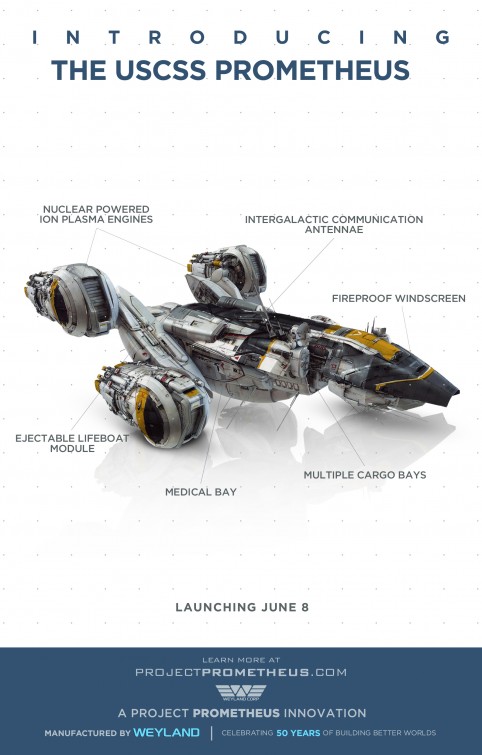 Having watched Prometheus, first in a planned series of prequels to Alien, and this my second viewing of the film, I can't honestly say the movie does a very good job of answering any lingering questions I had about the series. Did I need answers as to who the Space Jockey (the big, dead alien in a chair at the start of the 1979) movie was, or how the xenomorphs came to be? No. They're alien creatures and the whole point of the first movie is that the humans (and through them the audience) doesn't know what to expect. The mystery of everything, the questions without answers, adds to the shock value and attempting come up with stories behind all of it just reduces the effectiveness of the original film. It makes it less, a problem many prequels (and sequels, for that matter) stumble into.

Besides which, the film doesn't really do a good job of answering anything in a satisfying way. Nor does it cohesively setup its own events to line up with the start of the original 1979 film. Everything is off, almost like they wanted it to be more of a reboot than a straight prequel. "Now that we've given you the prequels, let's go through an remake the originals to more closely align with these new stories." I doubt that was really the intention of the producers or the studio, but everything is just off enough that I can't rightly say. It certainly doesn't help that the next prequel, Alien: Covenant doesn't answer any of the questions left over from Prometheus, but then we'll save complaints about that film for a different article.

In short, do you want to know more about the Space Jockeys and the Aliens? Well, I hope you do because nominally that's the point of Prometheus. In the film two archaeologists, Elizabeth Shaw (Noomi Rapace) and Charlie Holloway (Logan Marshall-Green) find an ancient cave filled with cave paintings. These paintings seem to indicate a great and towering god-like race that early humans first worshiped, as well as indicating a set of spacial coordinates (a star map) pointing to the planet these beings came from. Further, this wasn't the only site they'd found, having found a whole set of sites like this from every early human settlement across the globe. These beings seem to exist, so the archaeologists team up with the Weyland Corporation (yeah, those jerks) to fly across the galaxy to the Space Jockey planet do humans can finally meet their makers.

That's the theory at least. Unfortunately, what the humans find aren't the towering aliens but a huge, empty building and a lot of death. The Space Jockeys were once on this alien world, but it wasn't their home world. This was seemingly the site for their experiments (read: bio weapons). And one of those experiments, the proto-xenomorphs, is about to break free. 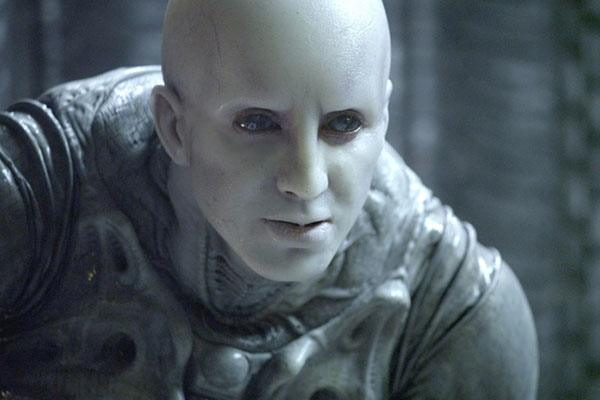 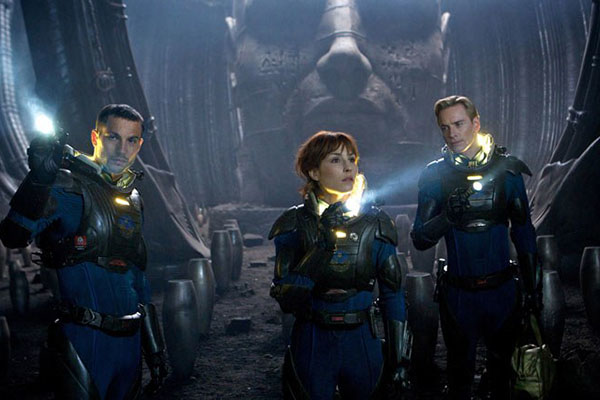 I will admit that while watching this movie there were a fair portion of the runtime where I didn't hate what I was watching. While I certainly didn't need more information about the Space Jockeys, this film at least had all its events set far enough apart from Alien that any connections would be minimal; it certainly wouldn't ruin the story of the original film. And I will admit that there were enough mysteries early on -- what happened to the Space Jockeys here and why is their ship essentially hibernating for 2,000 years? -- that I was actually interested in finding out the truth. If the film had been just about this, about the mystery of the titans, it might have worked really well. An interesting side-story to the main cannon that only barely connected in any meaningful way.

But then the proto-xenomorphs show up and the film goes right off the rails. It's weird to say, but once this prequel to Alien actually tries to be a proper prequel to Alien, it gets phenomenally less interesting. Suddenly the mystery of the Space Jockeys isn't the priority anymore, now it has to be a straight up horror movie. That's not to say there aren't some effective moments (a few scenes of true body horror certainly ratchet up the tension) but they're disconnected from what the main story was building to, and they only muddle the plot line going forward.

Worse, though, is that none of it actually seems to matter. One dude seemingly is impregnated by a xenomorphic-snake, but we never see the birth of the creature he's carrying so what was the point of forcing him to go through that? Then a woman gets impregnated in a different way, and actually carries a proto-facehugger in her belly. How does that work and why have this version of impregnation in the movie when we already have snake-horror-beasts? And how does it all connect to eight other weird ways the xenomorphs apparently can be created? And why were the Space Jockeys stupid enough to experiment with any of this?

None of those questions are answered. The movie starts with an exploration of humanity's relation to a larger, older race and ends having figured out nothing and going nowhere. A bunch of things happen and a ton of people die, but none of the issues raised by the start of the movie are ever answered in a satisfying way, and it's all because the Alien prequel realized it somehow have to shoehorn in some Aliens. 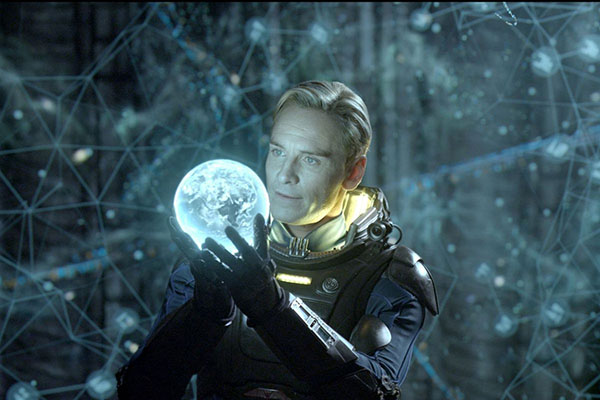 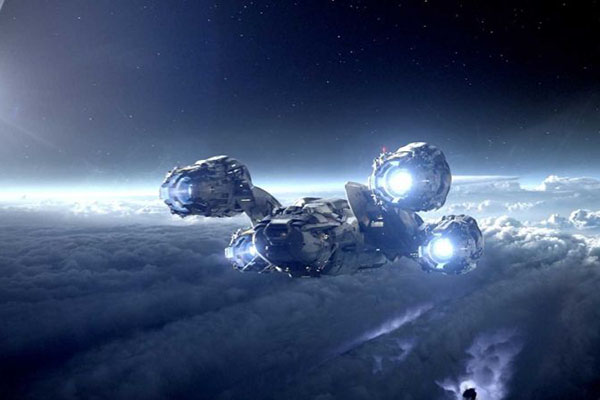 Of course, if we try to ignore the story and just enjoy the horror, we still run into issues. Namely, none of the characters behave in any kind of realistic way. Take the guy that gets the snake down his throat. He's a biologist, and he, along with another guy, are in a storage chamber that has a couple of these snake things squirming around in the mud. When he spies the snake-beast, he kneels down to get a better look. It then rises up out of the mud, like a cobra, and starts waving back and forth. You know, like a snake does before it's about to strike. Does he back off or think, "you know, maybe getting attacked by an alien snake is a bad idea"? No, he gets closer and then, lo and behold, is surprised when thing attacks and kills him. For a trained biologist he was pretty crap at his job.

Then there's David (Michael Fassbender), the android assistant to the ship. We, as the audience, already know that androids can't be trusted since the previous films in the series have show the bots to have their own agendas. David, though, seemingly causes carnage any chance he can get, infecting people with alien DNA, throwing people to the wolves, and generally letting people die all around him for no reason. There's never an explanation for why David behaves the way he does, so it's hard to know what his motivations are or if we should care. He's an agent of chaos, but not a fun one. He just exists to do bad things and usher whatever semblance of a plot we have along the way.

Now sure, the argument could be made that the producers had planned to answer some of the questions (about the aliens, the Space Jockeys, and David) in the next movie in the planned series. And yet they didn't -- Alien Covenant (which we'll cover next) is a largely unrelated movie about a different cast of characters. Any unresolved questions we have are back-burnered for a different story about people getting stupidly killed by Aliens. About the only thing consistent between the two movies is that humans are dumb and will get themselves killed in the stupidest ways possible.

But I already knew that since the original Alien film had pretty clearly illustrated that. What, then, was the point of Prometheus? What were the producers trying to say with this prequel? Having watched the film twice now I can't rightly say. I just know that I really don't want to have to watch it a third time.