It's been three yeas since we last checked in with the crew of The Orville (the second season came out in early 2022) and it's really nice to be back with this show. The landscape for Star TrekOriginally conceived as "Wagon Train in Space", Star Trek was released during the height of the Hollywood Western film and TV boom. While the concept CBS originally asked for had a western vibe, it was the smart, intellectual stories set in a future utopia of science and exploration that proved vital to the series' long impact on popular culture. and its various clones has shifted greatly in the years since The Orville debuted -- the show went from only having to compete with Star Trek: Discovery for two seasons to having five "real" Trek shows on the air -- but The Orville remains one of the best riffs on the format currently airing. 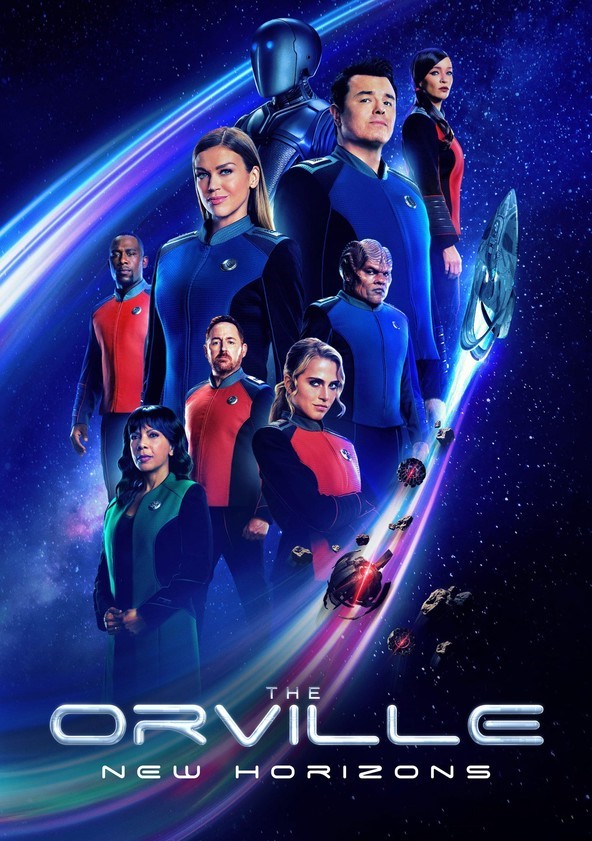 Now, to say the show "competes" is a bit of a misrepresentation. It's clear that The Orville plays in the same genre as Trek, but where CBS and Paramount are dedicated to trying to capture to look and feel of the Kelvin movies on the small screen, with all the flash and glitz that goes with it, The Orville feels like a throwback. It's still, and storytelling, come from the age of The Next Generation. The show doesn't have the same budget as Strange New Worlds and it's legitimately no concerned trying to do storytelling in the same vein. Instead it wants to bring the comfort of solid, classic Trek while also tackling the political and cultural stories that made Trek a cornerstone of television for generations.

Picking up after start of the Kaylon war (as glimpsed at the end of season two) and then quickly moving ahead in time by three years (because it's been three years since we saw any of the characters), the third season quickly sets up the stakes for this year of the show: the Kaylons are a threat to be dealt with, but there's also the Krill, the theocratic warriors who would love nothing more than to see the Planetary Union fall so they could conquer more worlds. External forces pull the Union from every direction.

Compounding all of that, though, are the internal politics of the ship. Many of the crew despise Issac now because he's Kaylon and, despite him turning against his people to side with the Union he still is the subject of a lot of racism. There's also the grouping tensions with the Maclans, as exemplified by Topa, the son of Bortus and Klyden, born a girl but changed as birth to be male. Topa, though, feels like a girl and wans to change back, and the political issues this raises, and the aftermath of this decision, call into question the loyalty of one of the Union's strongest members. By the end of the season everything could change for the crew of The Orville.

Looking at The Orville and comparing it to current Star Trek show's going on right now, there's is on key difference between the franchises: The Orville isn't afraid of getting political. I touched upon the idea that Trek has always been political, and that's true, but current shows in that franchise seem to shy away from getting too deep into lefty (or righty, for that matter) issues. Where The Original Series had episodes dealing with all kinds of political issues of the day, and would willingly tackle them head on, current shows don't seem to want to get near that same kind of discussion. They'll cast crew in all races, creeds, and genders, but rarely do we have anything to rival "Let that Be Your Battlefield" with the race of white-and-black faced aliens who hate their black-and-white faced cousins. 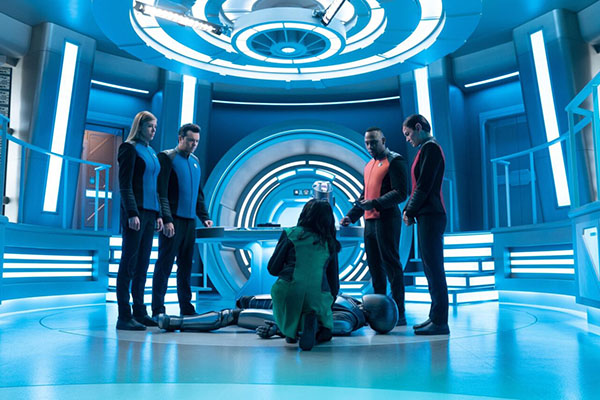 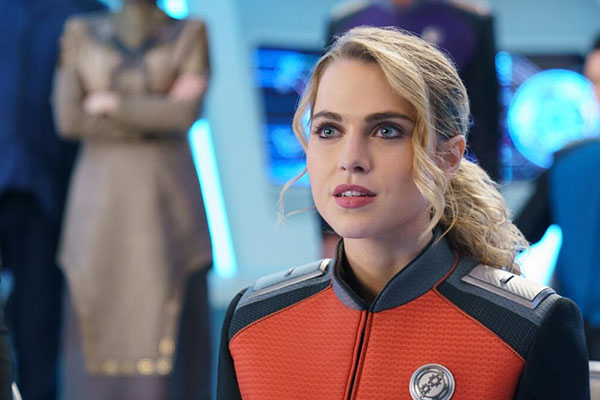 The Orville has absolutely no issue going for those matters. The first episode of the season sees Issac dealing with racism, including having his workshop vandalized, all because he shares a race with the robotic villains, the Kaylons. This episode, "Electric Sheep", doesn't necessarily make a villain of the people who hate Issac -- it goes into depth on their reasons for their hatred -- but it also never paint Issac in a poor light. This way of exploring the discuss keeps it from feeling heavy-handed even as it makes it clear who is right and who is wrong (and it's not Issac).

Oh, that episode also deals with bullying, suicide, and what it means to be alive. Issac willingly ending his own life is one consequence of the issues he has with his crew, but then he's also revived, and this revival in part happens at the hands of one of Issac's biggest detractors. it adds nuance and depth to the discuss and allows everyone on the show to tackle their feelings in mature ways. Try to find another show right now handling issues like this with that kind of depth.

We also have "A Tale of Two Topas" dealing with the young Maclan's gender identity. The show again manages to handle the issues in the show, whether someone should be allowed to choose their gender identity or not, with care and restraint. The message could come off as heavy-handed (Discovery went way too preachy with its agender character Adira) but The Orville manages to get you invested and interested in Topa's fate without ever talking down the audience. That's deft storytelling.

Now, that's not to say that every episode of this third season is a winner. I found "Mortality Paradox", the third episode of the season, to be little more than a holodeck episode by another name (with an ending that the show had to explain to us because it couldn't effectively tell the story to us during the course of the episode). Meanwhile, "Shadow Realms" is little more than a monster-of-the-week episode that squanders any potential it could have found in its initial setup. These were two tedious early episodes that made me think the shows was struggling to get its feet after three years away. 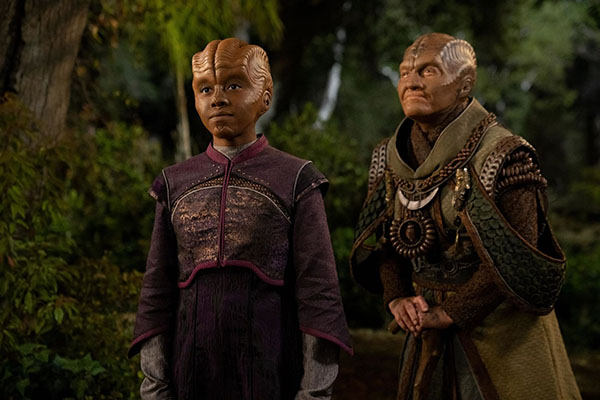 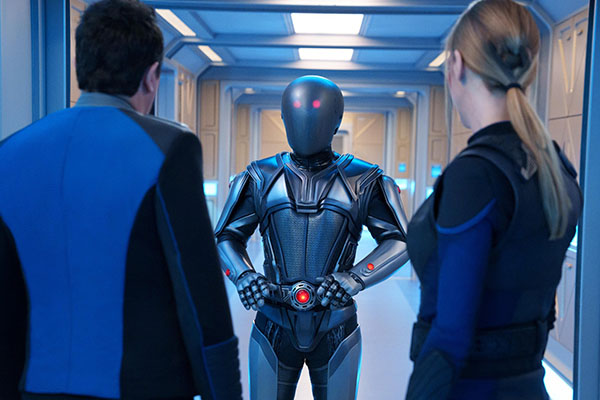 Once it does get going, though, man does this season take off. Stories about Issac, stories about Topa, and more tales with all the regular crew members that help to broaden and develop each and every character on the show. It's pretty clear by episode four there's a plan for the season being set in place and once the show really gets into it's broad, arc-long stories, The Orville begins to ding once more. By the end of the ten-episode season you're left wanting more, hoping against hope that a fourth season announcement will be made soon.

If this is the end of The Orville it would be a sad day, indeed. The show does put itself in a good place for this to be the last season, wrapping up many of its major story and character arcs. Still, there's so much potential in this world and these characters that it would be a pity to see the series end here. Hopefully enough people watch this show on HuluOriginally created as a joint streaming service between the major U.S. broadcast networks, Hulu has grown to be a solid alternative to the likes of Netflix and Amazon Prime, even as it learns harder on its collection of shows from Fox and FX since Disney purchased a majority stake in the service., and the fans let their love of the show be known, so we can get a fourth season. There are great Star Trek series running right now on Paramount+ and I certainly enjoy them. However, I think the TV landscape would lose something great if this is the last we see of The Orville. If this isn't the best Trek show running right now it's pretty damn close, and it certainly carries the legacy and intent of The Original Series better than any other show airing right now.