Shooting on the Run

While the first two games in the Contra franchise started out in arcades, the series has long been considered a console franchise. Most of the entries went to consoles, in no small part because the arcade scene in the U.S. was never as big, or as long lasting, as it was in Japan. Plus, with the NES and then its successor, more money could be made, long term, with console releases. The goal, then, was to get games on as many consoles as companies could to sell those sweet, sweet cartridges.

The shift from arcades began fully with the release of Operation C (or, simply titled Contra in Japan) on the Game Boy. Unlike the two previous games, original recipe Contra and Super Contra, Operation C is an originally developed game in the series... if we loosely define "original". The game isn't directly based on any one adventure, instead cherry-picking moments and beats from both previous game, blending them together into a portable title that feels like a natural extension of the series. How much you will appreciate the game really depends on how much you were craving "more Contra" at the peak of that franchise's glory.

In all respects, Operation C (following the sequel naming convention started on the NES with "Super C") feels like a Contra game of the NES era. It's transition to the Game Boy didn't really change much of anything about the way the series looks, sounds, or plays. From the first seconds of the game booting up, through every minute of this portable title, this game perfectly evokes that Contra vibe, with the only difference (naturally) being that you have to play this game with only one player instead of the two from the Arcade and console releases. This isn't a cooperative adventure and that alone might have sunk it for some fans.

So long as you didn't want to play all these games with a buddy, though, there's a lot to like about Operation C. During the NES and SNES era, Konami proved themselves to be one of the greats of the third party companies, crafting titles for the various Nintendo consoles that showed a level of meticulous care and craftsmanship. Konami of this era didn't shovel out titles even when they put games out on the Game Boy, and aside from the occasional misstep (such as the first The Castlevania Adventure, which was quickly course-corrected with Castlevania II: Belmont's Revenge) Konami released one masterful title after another.

This Game Boy title shows that same level of care. The game feels like a proper Contra game, with the tight and responsive controls you'd expect. All that twitch knowledge and ability you earned on the previous two Contra titles carries over here, letting an experienced play quickly settle right into this game and get to shooting. Honestly, it's probably a little too easy to get right into the game as this third entry in the series (although not third official as that would come later) doesn't really do much to deviate from the formula of the series at all.

In construction this game feels like it took the best parts of Super C and reused them. The game breaks its action up over five parts with levels alternating between side-scrolling action and top down shooting sections. The levels themselves feel like they borrowed their designs from Super C, not only in graphics but also in construction. Meanwhile it's music comes direct from the first entry, doing Game Boy riffs on the original's music, which does rock but doesn't feel fresh. This is a game that very much recycles what worked before and doesn't see an issue repackaging all of it again.

That's not to say it does nothing new, in fairness. The levels aren't exactly the same, so while you'll feel like you've played them before the actually sections of the game have their own flow which will still keep players on their toes. The game also has one new power-up, the Homing Shot (H), that is included instead of the Machine Gun (M) (as auto-fire is now on by default) and the Laser (L). Laser was pretty useless for most players so it's absence isn't missed, and the Homing shot can be pretty useful if you're a scrub (like me).

The bosses, meanwhile, are also new and some of them are quite devious. They have interesting attack patterns and moves that can be hard to dodge without studying the enemies a few times. Certainly their more interesting, and more creative, than many of the bosses to appear in previous games, and they add a real freshness to the title that the rest of the game lacks. It actually makes me wish they would have added more new elements to this game along with the bosses as that could have really helped this game sing.

In fairness to the game, it's not a short adventure. Even playing this game flawlessly will see you take about 20 minutes to clear it which is longer than either of the previous adventures in the series. This is despite it's lower stage count as each of the stages are much longer and more involved in general (even if a couple of stages do pad out their time with some auto-scrollers). For a true Contra fans this is exactly the action you're looking for, right in the palm of your hands (as I'm sure the commercials said). 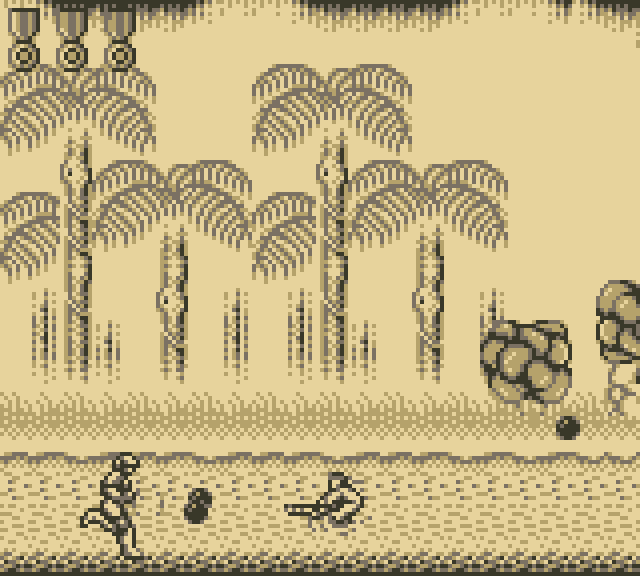 But I do come back to the thought about just who this game is really for. Considering its length, and the relative difficulty of the game (it's a Contra game, one without an extra life code, making it exactly as difficult as you expect) it's not exactly well geared to quick bouts of play on the go. Meanwhile, those looking for a proper sit-down experience from the series had both the first and second NES games to play with. This game provides and excellent package on its own but it is more of the same, for good and ill, that was already found elsewhere.

I don't think Operation C is a bad game. It's a competent entry in the series and solidly made to boot. The problem is that there's nothing about the package that recommends it either. If you didn't have another Contra game this was the perfect package to sate the need. But with two entries on the NES, and an SNES game soon to come that would actually push the series forward, Operation C can't help but feel like an also ran that gets by doing exactly what was expected of it and very little more, which just isn't enough.