Madness in a Small Town

When we discussed the 1973 The Crazies previously, I was struck by two different things. One, the film allowed George Romero to explore a different kind of outbreak, continuing the themes of the various zombie films he'd made, making it an interesting companion piece to his previous 1968 Night of the Living Dead and eventual 1978 Dawn of the Dead. But also, it was really bad. It didn't show any of the grace that would come from his latter film, it was just a poorly strung together film that struggled to even convey the horrors of an outbreak. 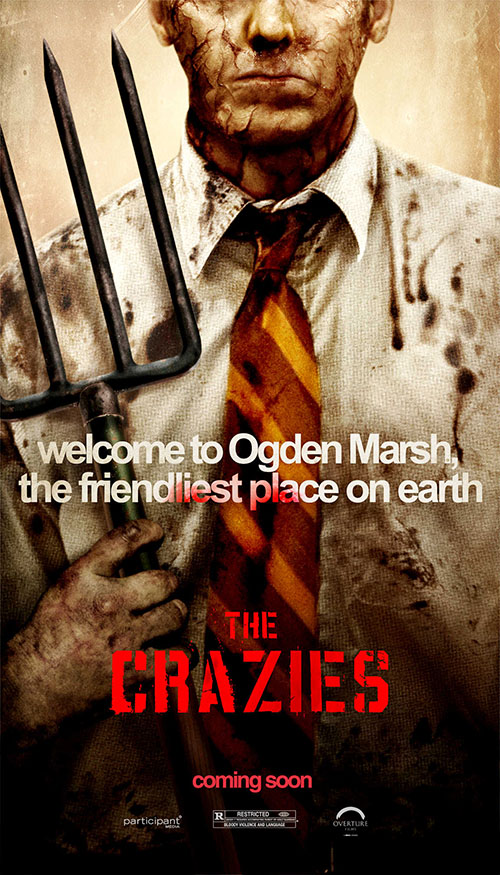 A kind reading of that 1973 film would say that the chaos on screen, the fact that the film is muddled and strung together, mirrors the outbreak going on in the film, that nothing gets accomplished and the U.S. Government in the movie is unable to control a problem they created. However, that doesn't really make for a watchable film. Going into the 2010 version of the movie (which, full disclosure, I'd seen once before), I was curious how much of the original film this movie would pick up; I knew it was a more watchable film, but would any of the commentary come through? Would the movie have anything of George Romero's voice in it?

The short answer is no. This version of The Crazies is an improvement in many regards -- more likable cast, better production values, more coherent storytelling, and better horror -- but it lacks any kind of commentary or satirical bite. It's much more focused on the heroes, trying to escape their own tragic circumstance, being trapped in a town they called their home and hounded on all sides by monsters, and forces, trying to kill them. It reminds me, in that regard, of all the live-action Resident EvilFirst released a Biohazard, the Resident Evil games, and eventually movies (awkwardly and clumsily) tell the stories of a world ravaged by zombies and the greedy corporate, Umbrella, seeking to profit from the mess. films in that regard... just better in most respects as those movies are almost entirely train-wrecks through and through.

In the movie our hero is Sheriff David Dutton (Timothy Olyphant), the local law in Ogden Marsh, Iowa, who, along with his deputy Russell Clank (Joe Anderson), help keep the peace in this quiet little farming community. Davis and his wife, Judy (Radha Mitchell), have a kid on the way, and their looking forward to raising their tyke in this idyllic town... right up until things start going very wrong. One of the locals comes onto the baseball field during a game, a shotgun in hand, and when David confronts him, he draws, forcing David to shoot the man. The autopsy doesn't turn up any evidence of drugs or alcohol, but it's when a tip comes in that an military plane crashed into the marshes near town -- marshes that feed the river that provides fresh water to Ogden Marsh, that David begins to suspect something may have gotten in the water and could be influencing the town.

Soon, as would be expected from the title, people start going crazy, attacking each other, killing without remorse. The town is quickly put under a quarantine by the military, but David and Judy get split up (when Judy is revealed to have a higher than normal temperature likely because she's pregnant), and David has to escape the military "rescue camp" he's sent to, get back into town, and save his wife. This then leads to a harrowing journey as David, Judy, Russell, and a few other stragglers, try to find a way to escape a town full of crazies and the military hell bent on killing anyone that attempts to flee the quarantine. 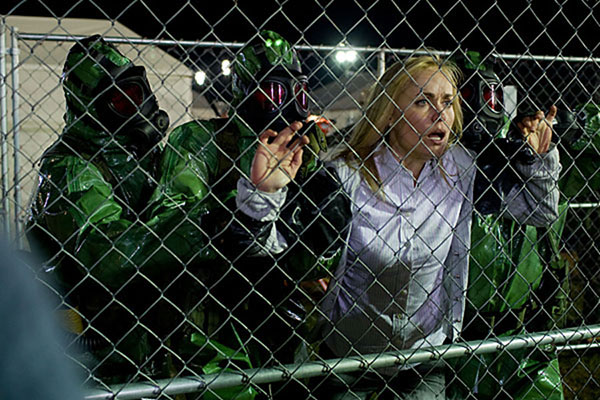 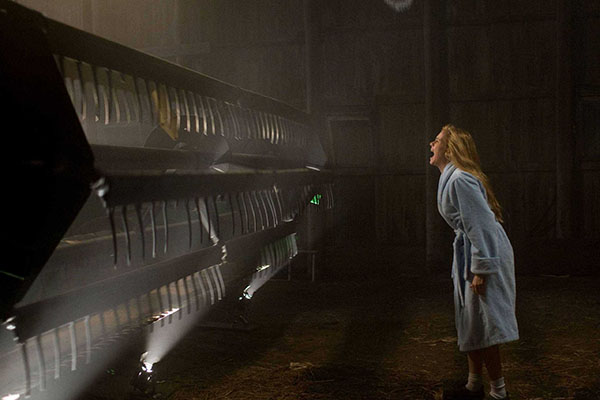 From a pure thriller stand point, the 2010 Crazies stands head and shoulders above the 1973 Romero version. This is a slickly produced and well acted horror film that very neatly fits the mold of most Hollywood horror films. It is bleak (some of Romero's bleakness does still come through in this new version), but it also hits all the usual action beats and horror notes you'd expect from your standard horror film. I'm not saying that's a bad thing -- I actually really like this film as a normal horror film -- but anyone looking for anything approaching the voice that Romero brought to his version will have to look elsewhere; like a lot of Hollywood films, Crazies 2010 doesn't really have anything to say.

I think that's one thing that's missing from the film that keeps it from being a classic. The film, despite showing a town slowly driven insane by a military experiment, doesn't actually have anything to say about anything at all. When the people go crazy, what does it reveal about themselves? What does it reveal about humanity? The people driven insane by the military bio-weapon could be tapping into evil deep within them, finally able to let their caged beasts out. If the film had taken time to explore that, to reveal why some people go crazy and others don't -- because humans are, by their nature, animals, and only some lack that drive, for instance -- that would have been a stance the film could have explored to add some depth to the characters, and even more depth to the pandemic they experience.

This kind of fleshing out of the "why" of the matter when it comes to the film's monsters -- the town full of crazies -- is important because it would have actually upped the horror of the situation. Romero's zombie films reflected the zombies back on us, used them as a dark mirror to highlight our own flaws. His Crazies didn't really do that (although there were moments that tried), but a film using his ideas as a framework to really explore the depravity humans keep bottled up could have then cast that mirror, once again, back at us. "Look at what we become when inhibitions are removed." This film doesn't say that, and only maybe implies it a tiny bit, and that weakens its story, and its horror, a bit.

It also doesn't take any kind of stance on the military that would make this kind of compound. Despite saying its the fault of the U.S. military, the military men themselves are barely characters in the film at all (again, in contrast to Romero's version). They are masked bogeymen, and the few times we see anyone from the military its grunts or low-level players. This is just a mistake, the say, nothing more. This doesn't allow us to explore the military as a causal agent, and it leaves the film without an opinion on anything related to this setup. There's no commentary on the evil of bio-weapons, or on the way the military cleans up this mess (by killing everyone in the town). They're a shadowy, removed threat and that, too, weakens the film a little. 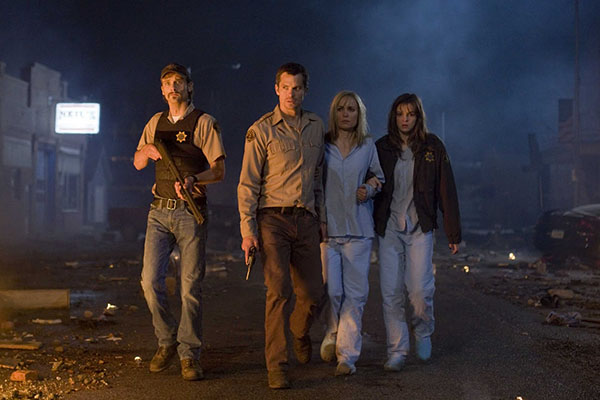 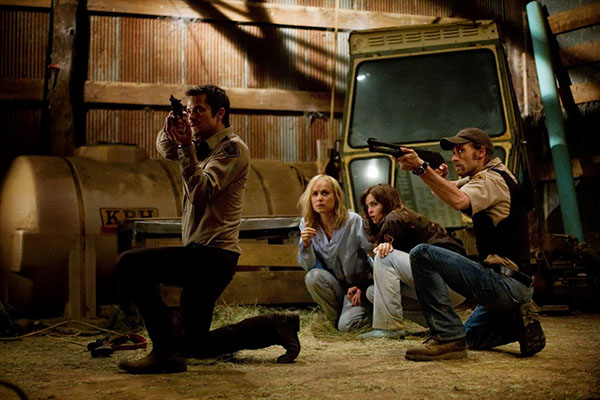 Honestly, this film wouldn't be great were anyone else in the lead. However, because the film managed to get three great leads -- Olyphant, Mitchell, and Anderson -- it's far more watchable and interesting than it has any right to be. This is the kind of film that is saved by its lead actors who do everything they can to create fleshed out, three dimensional characters from the material they're given. The production team clearly knew what they had when they landed these leads, focusing the whole film on them and cranking out a solid journey for these characters. It's about the best outcome that could have been expected, and it makes for a very slick, very watchable (if rather shallow) horror film.

The big issue is that it just doesn't stick with you afterwards. Once you're done watching the 2010 Crazies it quickly fades from your memory. It's well made, yes, and the acting is great, but there's no story to it, no substance, no voice. More humor, or more gore, or even more politics could have made this into something special. It's a solid little film for what it is, but it's very much a broad, people-pleasing horror film with all the possible edges sanded off. It has nothing to say beyond "murderous people are scary" and, yes, that is enough to carry through the film. Afterwards, though, you'll really wish the film would have said something more on the matter.