Just Do the Same Thing Again

I don't think anyone would argue that we needed a sequel to the 2012 21 Jump Street. That movie was a fun lark, a parody of the original 1980s TV show that still managed to tell a compelling story, but the movie said everything it needed to in the first go round. Any sequel would either have to get serious about its characters and potentially lose the comedy magic of the first film, or it would inevitably retread the material from the first movie in increasingly soulless riffs on the same jokes (for an example, see all the sequels to Austin Powers: International Man of Mystery). 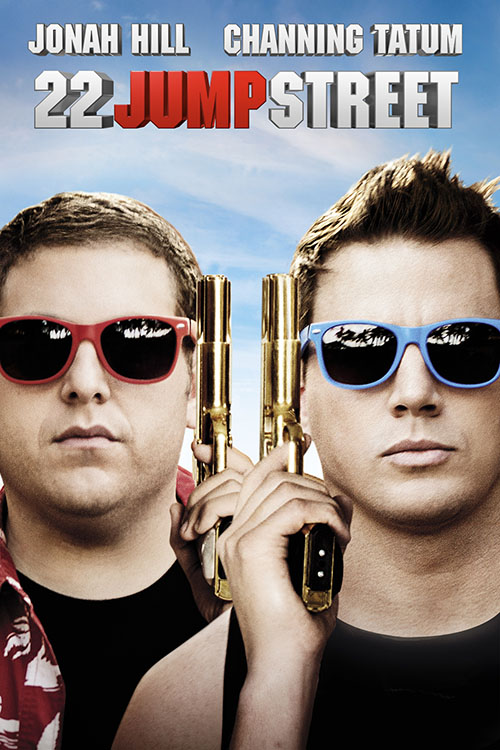 Thankfully the creators of these two films, Phil Lord and Christopher Miller, understood the magic of the first film -- the very idea of making a reboot of spin-off film of 21 Jump Street is patently ridiculous -- and knew how to spin that into a sequel. Where the first film made jokes about how silly a reboot would be, the sequel sets the heroes up on a case very similar to their first big assignment, with everyone telling them, "just do what you did again!" The sequel literally tees up jokes about how dumb sequels are, and in the process finds a new kind of magic that works all too well. Whether we need further films in this series is up for debate but this first sequel certainly knew how to mine magic from the material.

In the film Schmidt (Jonah Hill) and Jenko (Channing Tatum) botch an opening bust, finding the illegal black market dealer, the Ghost (Peter Stormare), but lose him (and his truck full of illegally imported animals) in expected (and hilarious) fashion. This leads their supervisors to assign them back to the Jump Street division (now upgraded with more money and moved across the street to 22 Jump Street) to handle a new drug case that seems a lot like their old drug case. The one twist: instead of heading the high school, Schmidt and Jenko are now off to college.

Their assignment is, of course, much like before: find the dealer, get to the supplier. But as the guys quickly realize, getting to the dealer and the supplier, despite what their bosses might think, is a lot more difficult this time around. No one is advertising the drug and the girl they thought might have died from a drug overdose may, in fact, have been the primary dealer. The guys scramble, checking various cliques, from the footballers (whom Jenko joins up with) to the artists (Schmidt's group), and many others along the way, but false leads and red herrings (sometimes quite literal) abound on a case that drifts away from the staid, standard plot line.

Up front we have to acknowledge that this is the Hill and Tatum show. Much as in the previous film, these two guys carry this movie. They both have a willingness to do anything for a joke, to throw themselves into any situation to mine laughs, and it adds a delightful, sometimes manic energy that helps keep the movie flowing. But the bond between these two really gives them the heart of the film; there's a bromance quality to the chemistry that the film doesn't shy away from. This pairing is what these two were meant for and it's hard to imagine any other actors playing Schmidt and Jenko. 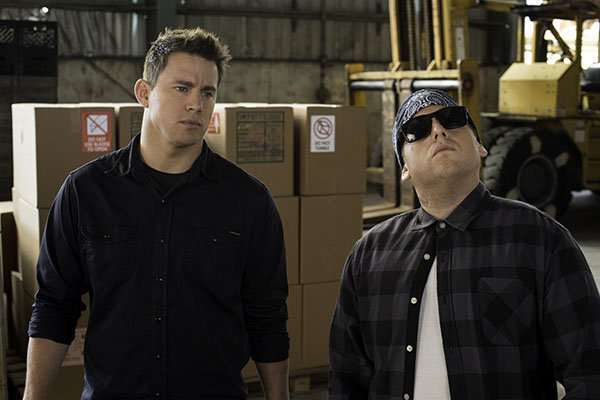 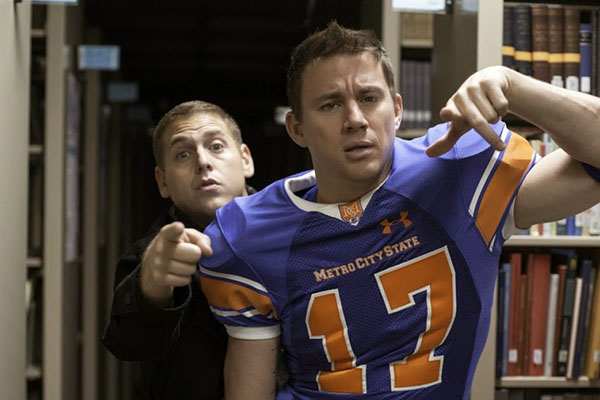 The film never shies away from the fact that it's a sequel, building the whole plot, in fact, around the idea that it's a dumb sequel. And yet while it has plenty of fun poking at the idea of dumb, retread sequels (with the characters doing a lot of the same kinds of things as before as part of the gag), it manages to setup a different plot with the characters in new situations all so it can actually mine new material from the concept. Jenko actually ends up with the jocks this time around (instead of being misplaced with the nerds as in the first film) and that allows him to grow and expand who his is. This inevitably puts stress on his friendship with Schmidt as the two, of course, grow and change during their time in college.

I actually think that's one of the things I like best: the films tests their friendship and sees what's actually at the core of who they are and why it works so well. Of course, it slyly does this by putting the friends in college (even if they are nearly 10 years older than the "usual" college student) and going through the standard college trope of "good friends growing apart as they become adults in college". The movie always knows how to take a setup and mine a bit of parody from it, but in the process it also finds a way to make real characters from the heroes and explore who they are and why they belong together as friends.

As for the case itself... well, that's probably the least interesting part of the film, honestly. It's pretty obvious early on that the Ghost is going to somehow be the dealer, just like the gang of biker gangs ended up being tied to the dealers. And there are only so many characters in the film so it's pretty obvious who will be the bad guys and what their motivations will be. Hell, the guys don't even really figure it out: all the evidence they need is just handed to them in an even more ham-handed fashion than in the first film, so it's less of a mystery than just a dumb cop comedy, but that works at least in the moment. I wouldn't have minded a little more depth in the mystery but there was plenty of other stuff going on the movie that I didn't mind it so much. 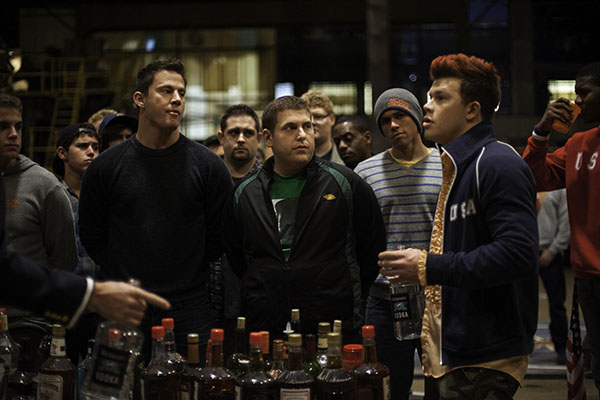 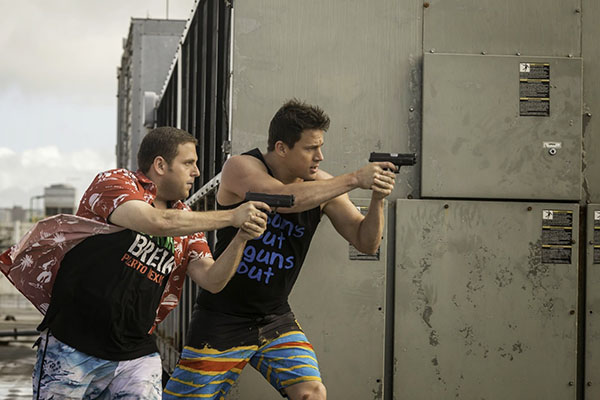 And then, right when the film has mined all it can from the concept of being a sequel it leads into the end credits that ratchet up the humor of it even more. Just in case you've never seen the film before I won't spoil it here but suffice it to say that the end credits manage to find new heights for the "sequel" joke to explore and it gets both amazing and absolutely ridiculous. It's weird to say but as much as I like the film itself I think the ending credit sequence may be the highlight of the film. At the same time, though, it also precludes the need for any further sequels, no matter what production company Sony may think or want (as these films have been ridiculously successful).

On the whole 22 Jump Street is a satisfying sequel. While it sets itself up to be a retread it ends up being anything but. Yes, the material has been seen before but the creators manage to twist and bend the concept to find new life and new situations for Schmidt and Jenko to explore. I don't know if you could pull of this feat again with the same characters (again, that end credits sequence makes any sequel unnecessary, while concepts like a Men in Black/Jump Street crossover have gone nowhere), but at least we have these two films to explore all the jokes and heart we can with Schmidt and Jenko. Personally I feel like that's enough.